For those of us who are not counted among the wealthiest 1% of Americans, it can be difficult to understand how much money these individuals have — or how they got it. As recently as a few years ago, that information would have been unavailable not only to the average American, but to government agencies, researchers and anyone else who cared to know. 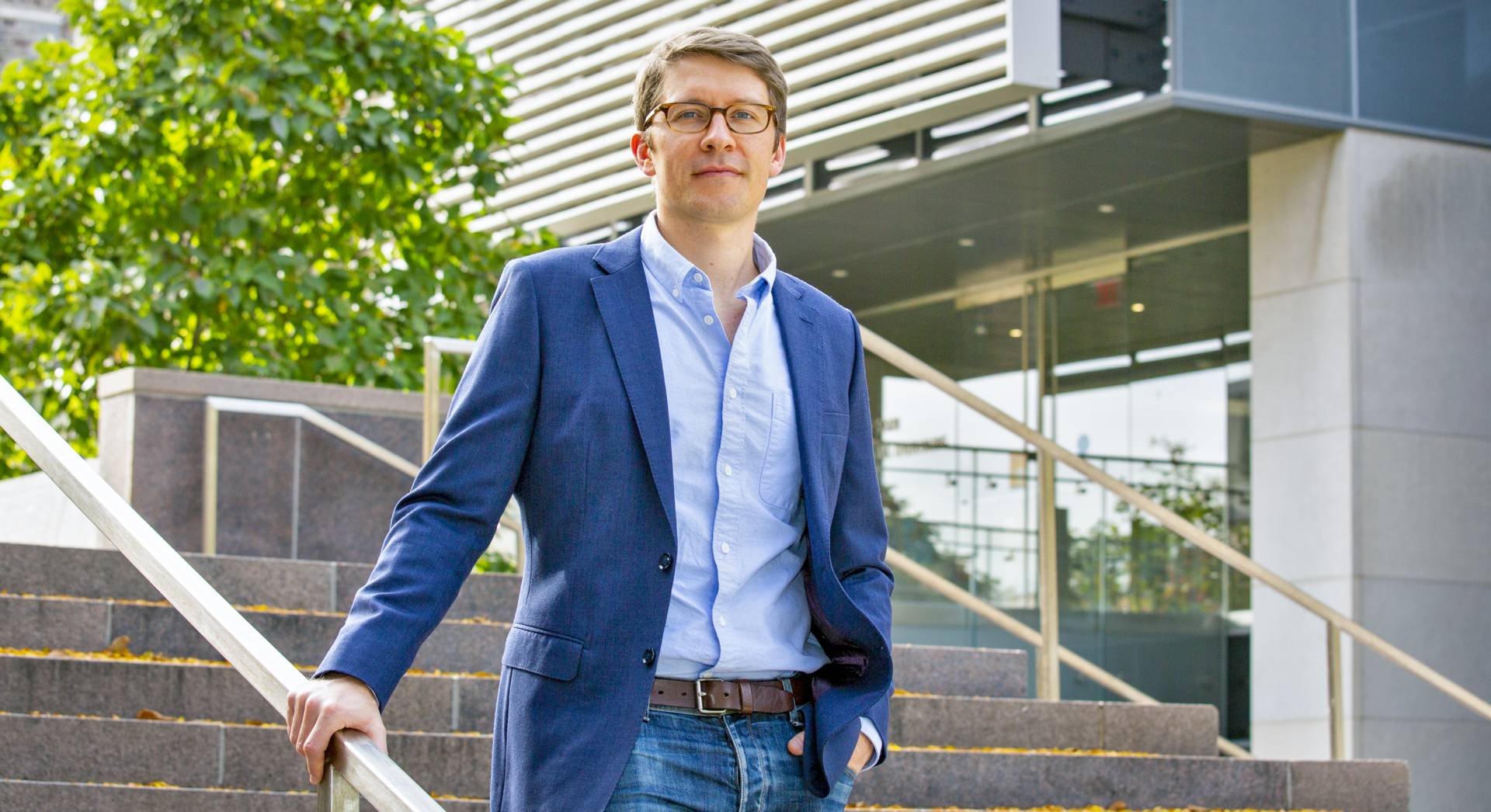 Wealth — which includes more than just a person’s personal and business income but also investment earnings, property and a myriad of other sources of money — is notoriously difficult to measure. To estimate it, researchers need income data (for example, from the IRS) and advanced statistical methods that help them estimate how much wealth a person’s income might generate.

Enter Princeton Professor Owen Zidar. A 2020 recipient of the prestigious Sloan Fellowship for early-career researchers, Zidar has produced an impressive portfolio of work that paints a clearer picture of how the richest Americans make their money, what’s driving inequality and how tax policies at local, state and national levels can help reverse troubling trends.

“Whether you’re talking about income or wealth, we know that inequality is growing, and understanding why is a big motivator of my work,” Zidar said. “Disparities in opportunity are not only problematic in terms of fairness, but also in terms of overall economic prosperity.”

“If we want to understand what we can do about inequality, we have to first understand why it’s increasing,” said Zidar. “And one of the biggest misconceptions people have is that the richest Americans are all Wall Street suits, coastal cosmopolitans or inventors in Silicon Valley. But when you look at the data more comprehensively, you see this hidden world of private business owners all over the country, and that has big implications for tax policy and politics at both the local and national levels.”

In a 2019 paper also published in the Quarterly Journal of Economics, Zidar and co-authors showed that, contrary to popular belief, many of the richest Americans earn their money by owning privately-held “pass-through” businesses where the business income is passed on to the owner and taxed as personal income. Most people in the top 0.1% own pass-through businesses, which are typically mid-market in size, earning less than $50 million in profits a year and employing about 75 people.

The millionaires next door

In other words, many of America’s richest people are working entrepreneurs running a local, private company. They’re not living on Fifth Avenue or running Big Tech conglomerates. They own the car dealership down the street or the roofing company the next town over.

“The nature of who the rich are is quite important for thinking about how they might respond to different policies,” said Zidar. “If we want to raise capital gains taxes and think the typical rich person is Elon Musk, then we might expect those people to react a certain way, making changes to how they hold their wealth, and that will affect how much money we ultimately raise.”

But the typical multi-millionaire isn’t Elon Musk, Zidar points out, and knowing that changes the calculation and what policies might be most effective at bringing in revenue. About two-thirds of top unrealized capital gains — or earnings on investments that have never been subject to a tax but could be — are actually held by private business owners, like the owner of the local car dealership. In another paper written with Princeton Ph.D. student Ole Agersnap, Zidar shows that an increase in capital gains rate would raise far more revenue than most people expect. Ultimately, Zidar says, a focus on raising capital taxes and closing loopholes for private business owners would bring in a lot of money–and might be much easier to enforce than some other recent tax proposals.

Speaking to the role of economists, Zidar cited an American Economic Review essay by Nobel Laureate Esther Duflo that argues economists should approach their work like plumbers — as technicians committed to understanding how a policy will play out from beginning to end.

“I think Duflo’s absolutely right,” said Zidar. ”I think of economists as engineers. If you want to build a bridge, it’s our job to give you the best numbers, tell you what’s possible, and give a sense of what problems may arise and what is likely to happen in the real world. If we tell you what you want to hear rather than the truth, things won’t work out well for anyone.”

An early interest in debates about inequality

The oldest of six siblings, Zidar was born in Chicago but spent his childhood moving around the Midwest for his father’s job as a salesman with Burlington Northern Railroad. In 2000, the family moved to Houston when another company Zidar’s father worked for was bought by Enron. A year later, Enron experienced one of the most dramatic and scandalous corporate bankruptcies in history.

“The whole crisis happened just as I was applying to colleges, and I remember administrators at some of the schools checking on me because they knew my dad worked for Enron,” Zidar said. Ultimately, Zidar says, his dad’s job was “collateral damage” to the Enron scandal, and the experience showed him how a single company can majorly help or hurt a community and its people.

After high school, Zidar enrolled at Dartmouth College, where an early love of philosophy and debate quickly transitioned into a passion for economics. “I took an economics class in the spring of my freshman year and thought ‘Wow, this is how I think.’”

From there, he got involved in undergraduate research with Dartmouth Professor Chris Snyder. “After that, my interest in research was really hard to shake.”

Zidar’s said his senior paper at Dartmouth, which was ultimately published in the Journal of Political Economy after he finished his Ph.D., was partially motivated by a desire to test scientifically a widely-held belief he heard repeated growing up: That tax cuts for the rich create economic growth. Ultimately, Zidar argues, the data says they don’t.

“In a lot of ways my interest in these topics goes back to some long-standing debates I’ve always had with members of my family and people I knew growing up who tended to be more conservative than I am,” Zidar said. “I think these debates are critical to have, but it’s also critical that we try to answer these questions scientifically and accept what the data tells us.”

Helping millions of people with the right policies

Though Zidar’s upbringing and observations of the world sparked his interest in inequality, it was time in Washington that convinced him academic research was essential for good policy.

In the second year of his Ph.D. program, Zidar had the opportunity to work for President Obama’s Council of Economics Advisers, a group of economists who work at the White House and provide the president with economic insights and analysis. As a staff economist, Zidar was assigned to several projects related to tax policy and to the 2008 housing crisis, trying to understand the best way for the government to help homeowners facing record foreclosures.

“It was an intense debate, and different groups had different views,” said Zidar. “But I remember being amazed at the scale of how many millions of people would be helped by the right policy, either by getting more money or staying in their homes longer. That’s the type of thing that makes it easy to get up in the morning and work hard.”

How to reduce inequality

From his position in academia, Zidar has a wish-list of policies he believes could combat the trend of growing inequality. Reversing significant cuts made over the past twenty years to individual income tax levels would go a long way, he says, as would doing more to tax inheritance and estates.

“In the early days of the U.S. income tax, the government used to consider inherited money as part of a person’s income and tax people on all of it. We’ve moved very far away from that.”

Zidar would also like to see more resources and mentoring programs to support economic mobility for low-income and underprivileged young people who are much less likely to start fast-growing businesses, and thinks changes to how the United States finances healthcare could make a big difference in the fight to reduce inequality.

“There are many missing entrepreneurs in America, who not only could create more economic growth, but could also help provide their peers with better employment and advancement opportunities in their companies,” Zidar says. “We find that people tend to hire others with similar backgrounds, so this issue matters for expanding both economic prosperity and economic opportunity.” In forthcoming work, he studies how health financing reforms could not only reduce skyrocketing consumer costs, but also make the U.S. a more competitive location for global businesses that are hesitant to pay high employee health care costs.

But whatever policies we pursue, Zidar says, the most important thing is that we study them thoroughly and understand their implications.

“Most of the time, we have the data and the methods to understand whether a policy we favor will play out the way we want,” he said. “It’s so important we take advantage of those tools and pay attention to what the research says.”

How to fix Social Security? It's political but it can be done