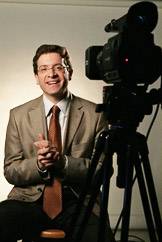 Julian Zelizer, who joined the University faculty in July as a professor of history and public affairs, is among a new generation of scholars revitalizing the field of political history by blending the study of politics and policy with social and cultural analysis. His diverse political knowledge has led him to become a frequent commentator in the media. Appearing in the media has helped Zelizer learn how to communicate complex ideas to a broad audience -- a skill he says has greatly improved his teaching.

Below left: Zelizer, and his mother, Viviana, the Lloyd Cotsen '50 Professor of Sociology, believe they are the University's first mother-son teaching pair. Growing up, Zelizer said he learned about the "excitement and challenges" of working at a university through his mother and developed an equal love of study and scholarship through his father, Gerald, a rabbi.

From the March 3, 2008, Princeton Weekly Bulletin

As the presidential campaign focuses attention on America's future, Princeton's Julian Zelizer is emerging as a prominent political scholar -- known for bringing historical insights to today's issues with a blend of social and cultural analysis.

Zelizer, who joined the University faculty in July as a professor of history and public affairs, utilizes a broad approach to studying political history, and coming to Princeton has provided him with an opportunity to further his interdisciplinary connections through his position in the Department of History and Woodrow Wilson School of Public and International Affairs.

"I'm a true historian, but I never like to be confined by boundaries," he said. "I've learned from social science, political science, social history. To do it right, it has to be done without any rigid disciplinary boundaries."

Nolan McCarty, acting dean of the Wilson School and the Susan Dod Brown Professor of Politics and Public Affairs, said Zelizer is a clear leader among a new generation of historians revitalizing the field of political history by combining research on politics and policy with social and cultural studies.

"One of the reasons why Julian is an important addition to the Wilson School is that he is one of the very few political historians whose work is as well known and highly regarded among political scientists as it is among historians," McCarty said.

Bruce Schulman, a professor of history at Boston University, credited Zelizer with helping to substantially reshape the study of 20th-century U.S. history.

"His research has proved influential in political science and sociology, as well as history," said Schulman, who had Zelizer as a colleague at Boston University from 2004 to 2007. "It is no exaggeration to say that by having Julian Zelizer join the faculty, Princeton has immediately become the leading center in modern American political history." 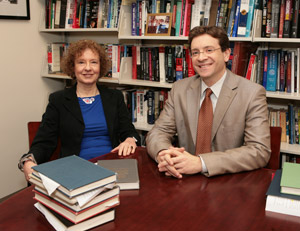 In addition to benefiting from interdisciplinary collaborations, coming to Princeton has enabled Zelizer to embrace his family roots by working at the same University as his mother, Viviana, the Lloyd Cotsen '50 Professor of Sociology.

"It's nice to teach at the same institution as a parent; it doesn't happen very often," said Zelizer, who believes he and his mom are the University's first mother-son teaching pair. "Given how small Princeton is, we already have many connections of similar friends."

Zelizer now lives near the New Jersey town where he was raised, Metuchen, and the synagogue where his father, Gerald, has been a rabbi for more than 30 years.

His love of study and scholarship was instilled by his mother and father at an early age.

"Both my parents contributed to my interest in education, creating a culture where learning and knowledge is a valuable commodity," Zelizer said. "I remember my grandfather, who also was a rabbi, used to say that being a professor and a rabbi is basically the same thing in terms of learning and teaching."

Zelizer said he learned about the "excitement and challenges" of working at a university through his mother, and observed how to educate and engage an audience by watching his father give sermons.

While Zelizer got his first taste for academia through his family, his undergraduate studies at Brandeis University convinced him to make it his career. Zelizer won a Ford Foundation fellowship in his junior year for students considering a career in education, which allowed him to work on an in-depth project with a faculty mentor.

Jim Kloppenberg, now the David Woods Kemper '41 Professor of American History at Harvard University, advised Zelizer's project on liberalism in 20th-century Massachusetts politics. The experience not only excited him about a life in academics, but it also cemented his focus on political history.

Zelizer earned his Ph.D. in history from Johns Hopkins University in 1996, where he worked with Professor of History Lou Galambos. Zelizer credits Galambos with helping him to think about how to study the history of institutions and to improve his prose to reach both academic and public audiences.

This semester Zelizer is teaching, "Historical Analysis and Public Policy," a graduate course in the Wilson School. The class is geared toward students going into government service and teaches them how to use historical thinking to deal with policy issues.

"Whether you are going to work in welfare or foreign policy, it teaches you how to think about the past in ways that actually offer help as you develop proposals in the present," Zelizer said.

Last semester he taught an undergraduate history seminar, "The Politics of National Security Since World War II," which examines the crucial role national security has played in contemporary American history from the Korean War to the war on terror. The class is based on Zelizer's research for one of his upcoming books, "Washington Warfare," tracing the history of national security since the 1940s and the interaction between issues of national security and domestic politics.

"We thought about how some of the issues today are not just related to President Bush or the war on terrorism, they are more deep-rooted questions this country has faced whenever we have a national security challenge because of the structure of our institutions and the political ideologies in this country," he said.

Yume Kitasei, a junior in the Wilson School, said Zelizer's class offered a historical perspective that is often lacking from contemporary political discussions.

"Professor Zelizer's class has influenced the lens through which I view the 2008 election," Kitasei said. "The entire course was not only about how history shaped politics, but how politics shaped history, up through today. How both individuals and movements can influence U.S. policy and the world order."

Senior Sarah Breslow said Zelizer has shown her new ways to look at history as adviser for her thesis on conservative politics in New Jersey during the 1970s.

"When studying modern history, it is easy to jump to conclusions about how one personally thinks events would have worked out," Breslow said. "Professor Zelizer has encouraged me to take a step back, and take a look at each of the factors that could contribute to an isolated issue in history. There are so many factors influencing government policies, and Professor Zelizer is particularly adept at helping me pick apart a problem and find every possible angle."

Princeton has afforded Zelizer the opportunity to guide the next generation of leaders, as well as to collaborate on research with some of the nation's top political scholars.

"The Woodrow Wilson School, the history department and the politics department are all looking at the evolution of our political system," Zelizer said.

He lauded the work of colleagues such as liberal scholar Paul Starr, the Stuart Professor of Communications and Public Affairs and professor of sociology and public affairs; constitutional expert Keith Whittington, the William Nelson Cromwell Professor of Politics; American political historian Sean Wilentz, the Sidney and Ruth Lapidus Professor in the American Revolutionary Era and professor of history; 20th-century American historian Kevin Kruse, associate professor of history; and Cotsen Postdoctoral Fellow Margot Canaday, who will join the history faculty in the fall and is the author of a book that will be published in a series Zelizer co-edited called "Politics and Society in 20th-Century America."

Zelizer said he hopes to expand the connections between history and politics already in place at the University. To this end, he is organizing a workshop on campus in April related to a book he is editing about the presidency of George W. Bush.

The workshop will feature scholars from various fields reviewing historians' essays from the book that examine issues of presidential power and political economy. The essays also explore American conservatism, a subject Zelizer has studied closely through co-writing "The Reagan Revolution" and co-editing "Rightward Bound: Making America Conservative in the 1970s," which are both forthcoming.

With the presidential election later this year, Zelizer also spends considerable time appearing in the media giving historical context and explaining how the pressing issues of the day may affect the election and the political direction of the country.

"Julian is a gifted communicator who can translate his scholarship into terms accessible to journalists and the general public," Schulman said of his former colleague. "He injects needed historical perspective into contemporary political debate."

Zelizer said the skills he's learned as a political commentator have helped him greatly in the classroom.

"I think a good interviewee is someone who is very clear and who can take a complex subject and explain it in a way that's intelligible for people who are not experts, and that's what you do when you teach," Zelizer said. "When I do a live radio show the conversation may go many different places, but I still have to maintain some control over the discussion, and that's also what I do in my classroom."

Scott Moore, a senior in the Wilson School, observed Zelizer lead thoughtful and meaningful debates as a student in his undergraduate history seminar last semester.

"Professor Zelizer has earned my respect with his ability to direct discussions to productive and instructive conclusions," Moore said. "This is very difficult to do in a seminar setting."

Zelizer said commentary also has broadened his knowledge about current events because it forces him to be always on top of the news.

"Since all my classes are about politics in one way or another, I can relate whatever we're learning to other stories in the news and bring in things that don't seem directly related for the students to discuss," he said.

Zelizer's role as a political pundit began a decade ago while teaching at the State University of New York-Albany, where he was a faculty member from 1996 to 2004.

The local CBS television station invited him to appear on a morning news show following a panel he organized about the impeachment of President Clinton. With the success of that appearance, Zelizer said he became the station's regular political expert, appearing live during the stalemate election night of 2000 and the bombing of Iraq in 2003.

Zelizer even honed his media skills on an Albany sports radio show analyzing the performance of his favorite football team, the New York Jets.

"It was kind of an odd way to learn, but doing a live radio show every week was really helpful," he said. "I learned the medium quickly and became comfortable with going live on the air not really knowing what we were going to talk about."

While some academics may shy away from appearing in mainstream media, Zelizer said he sees it as another way to further the study of political history.

"Public intellectuals comment on issues of the day using what they study, and I think a professor can contribute to that even if it's in a sound bite," he said. "It's a different way to get my ideas out there."