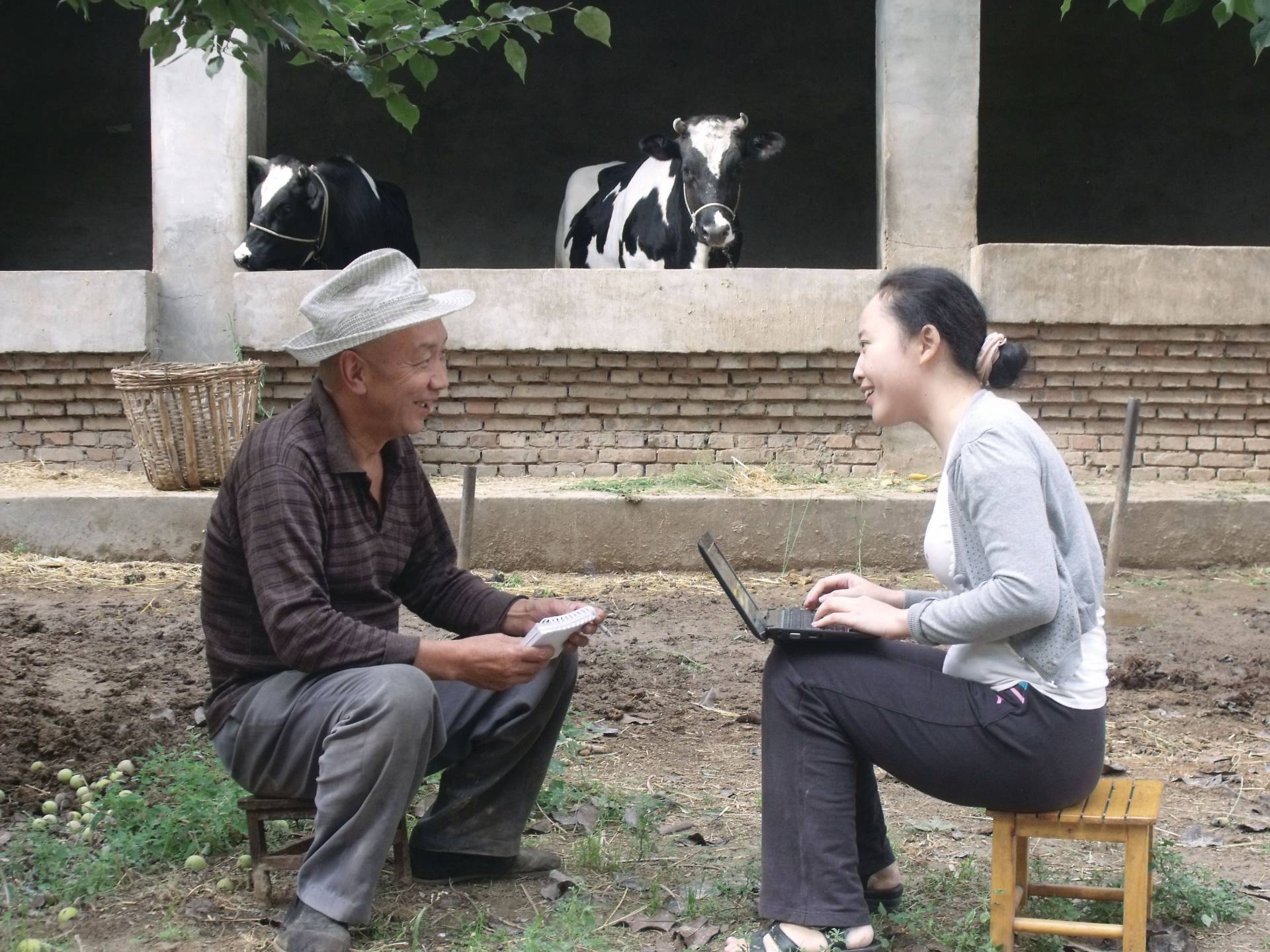 A researcher (right) conducts an interview as part of the China Family Panel Studies, a comprehensive effort to capture China’s fast-changing culture through interviews with over 40,000 individuals in 25 provinces across the country. 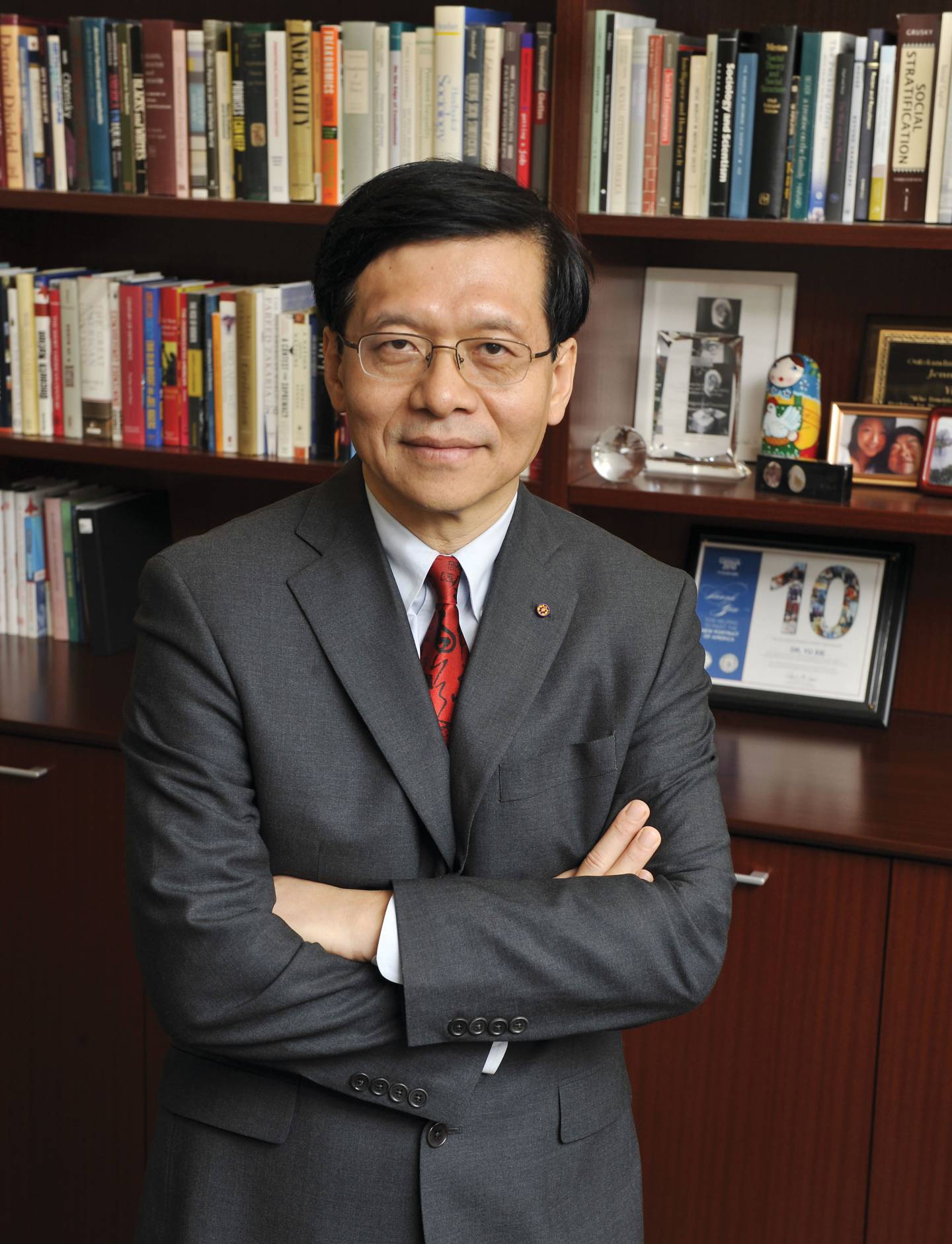 After spending decades studying the U.S., sociologist Yu Xie has turned his efforts toward capturing the cultural shifts in his native China.

Sociologist Yu Xie is the director of Princeton’s Paul and Marcia Wythes Center on Contemporary China, which aims to conduct research on Chinese society through an interdisciplinary approach. Known for the statistical rigor he brings to sociology, Xie, the Bert G. Kerstetter '66 University Professor of Sociology, joined the faculty at Princeton in 2015.

On a visit to China in 2003, sociologist Yu Xie realized he had something to offer that no one else did.

He’d been living and working in the United States for 21 years and was a highly regarded social scientist with a reputation for applying numbers-driven analysis to study the breadth of human experience. “My whole career has been devoted to the systematic and empirical understanding of the social world around us,” said Xie, the Bert G. Kerstetter ’66 University Professor of Sociology and the Princeton Institute for International and Regional Studies.

Xie had come to the U.S. in 1983 as part of an academic program that sent a select few Chinese students abroad for graduate study. At the University of Wisconsin-Madison, he studied the history of science and then earned a Ph.D. in sociology. He became a professor at the University of Michigan and went on to publish on provocative subjects like why women haven’t reached the same levels as men in science, and why there is a growing achievement gap between Asian American students and white classmates.

Settling in Ann Arbor, Xie focused primarily on U.S. issues during his early career. Xie’s wife, who had earned her Ph.D. in materials science, climbed the career ladder in industry. They raised children. Xie wrote papers and books, mentored students, and became one of the University of Michigan’s most respected faculty members in the study of structural shifts in populations.

By 2003, it was clear to Xie that a significant structural shift was occurring in one of the largest populations on the planet. China was changing rapidly in every area — income, education, urban migration — and the cultural changes alone dwarfed anything going on in the U.S. “It was like witnessing the Renaissance, or the French Revolution,” Xie said. “In the past, researchers didn’t have the tools to analyze societal change as it was happening. Now, we do.”

Only, in 2003, China didn’t. Chinese social scientists were not trained in the empirical methods that Xie and others had pioneered while at the University of Michigan’s Institute for Social Research’s Survey Research Center. These methods can separate opinion from fact and reveal trends across large swaths of populations.

Also missing were data. The government collected limited information — mainly population statistics — and released even less. With out quality metrics on the everyday experience of Chinese people across various backgrounds and geographical locations, Xie knew it would be impossible to make solid conclusions about how people’s lives were changing.

It was here that Xie saw that he could make a difference. He dreamed of conducting a large-scale study to gather data on typical Chinese households. He knew it wouldn’t be easy. Xie had already tried collecting data in the 1990s. He and his graduate students made trips from Michigan to China to interview families, but the researchers faced obstacles in gaining the consent of local officials.

Xie needed a trusted Chinese entity to support the study and, ideally, to help fund it. He eventually found both at Peking University, one of the top universities in China.

After some negotiations, the university’s Institute of Social Science Survey agreed to organize a comprehensive study that would follow Chinese families over several years to obtain information about family size and composition, marital status, education level, health and many other aspects of daily life.

Called the China Family Panel Studies (CFPS) — a panel study is one that tracks the same research subjects at different time points — the project would survey 15,000 randomly selected families, covering a total of more than 40,000 people in 25 provinces across the country and representing 95 percent of the Chinese population.

The effort kicked off in 2008 with a pilot study. Xie led the study design, traveling frequently from Michigan to Peking University, where Xie holds avisiting professorship, to train the staff and put in place procedures for storing and processing the data.

Yan Sun, an assistant research scientist at Peking University, remembers those early days. She joined the project in 2009 and today is the manager of survey operations for the CFPS. She oversees the recruitment and training of interviewers, mostly students at colleges and universities in each study region, who go house to house. Conducting the interviews wasn’t always easy, especially at the outset of the initiative. “You would have people calling the police to ask, ‘Why is this person in my neighborhood walking around with a laptop?’” Sun recalled.

One of the CFPS’s findings is that inequality in China is steadily climbing. In an article published in 2014 in the journal Proceedings of the National Academy of Sciences, Xie and then-graduate student Xiang Zhou, now an assistant professor at Harvard University, reported that China’s income inequality was among the highest in the world. The extra data were essential for this finding, Xie said, because the government’s official estimate of income inequality was much lower. He and Zhou attributed the inequality to regional economic differences and the urban-rural divide.

An issue that the CFPS has revealed more recently is the rise in cohabitation in place of marriage among young Chinese. Xie and Jia Yu, now an assistant professor at Peking University, looked at data from the CFPS in 2010 and 2012, which, before the CFPS, had never been collected in a systematic way.

They found that cohabitation is becoming more common among young, educated, primarily urban Chinese professionals, a finding they reported in the journal Population and Development Review in 2015. This contrasts with the pattern in the U.S., where living together is more common among people of lower socioeconomic status.

‘Do not play poker with him’

Robert Hauser, a professor of sociology emeritus at the University of Wisconsin-Madison and one of Xie’s advisers when Xie was earning his Ph.D., serves on the advisory board for the CFPS. “There are three aspects of this survey in China that are really important: First, it is comparative — the whole scheme is designed to be comparable with surveys in the U.S.; second, it is state-of-the-art in field methods used; and third, the data are all public,” he said.

Hauser has known Xie since shortly after Xie arrived in the U.S. and remembers him as one of the most energetic, assertively intellectual and driven students of the time. “He is utterly brilliant and good at everything,” Hauser said. “Do not play poker with him.”

Another long-time friend and mentor of Xie agrees. “He seeks advice, he is thoughtful, and then he makes up his own mind,” said Donald Treiman, a professor emeritus of sociology at the University of California-Los Angeles. “He is a strong mentor and he goes out of his way to make sure that his students are prepared for future careers in academia. That is an important part of his persona.”

In addition to holding a visiting professorship at Peking University, Xie is an adjunct professor at the Chinese University of Hong Kong and three other Chinese universities (Shanghai University, Renmin University and the Hong Kong University of Science and Technology). These appointments allow him to mentor and serve as a graduate adviser to a large number of Chinese sociology students.

Chunni Zhang is one of Xie’s former students from the Chinese University of Hong Kong. Now an assistant professor of sociology at Peking University, Zhang said Xie has been instrumental not only in introducing sociological study methods in China, but also in shifting the conversation about what should be studied.

“In the past, most scholars focused their research interests on ‘major’ social issues such as economic reform,” Zhang said. “Xie and his students, however, conducted studies on ‘smaller’ issues in China, family topics in particular, which broadened people’s vision and attracted more interest in studying these issues. Today, family-related issues are very hot topics in China.”

Xie’s studies serve as examples of how China’s issues could be framed into the research questions that have also been asked and answered in the West, Zhang said. “Instead of copying the Western studies, however, he maintained that Chinese studies should highlight the uniqueness or variation of the social context and tell different stories,” she said.

‘I want to find the truth’

In addition to his interest in Chinese society, Xie studies matters relating to Asian Americans, including why Asian Americans have higher grades and standardized test scores, and are more likely to attend college, than whites in the U.S. With Amy Hsin of the City University of New York, Xie reported in a study published in the Proceedings of the National Academy of Sciences in 2014 that academic effort, and not advantages in tested cognitive abilities or sociodemographics, was the greatest factor in Asian
American successes.

These studies on the Asian American achievement gap got a lot of attention, and references to Xie’s publications appear frequently in articles in the mainstream media. Xie resists getting pulled into discussions about the policy implications of his work. “I want to find the truth,” he said.

Two years ago, Xie moved to Princeton to head up its new Paul and Marcia Wythes Center on Contemporary China, part of the Princeton Institute for International and Regional Studies (PIIRS). The center focuses on studying the sociology of China through an interdisciplinary approach. “Princeton was one of the few places that could tempt me to leave Ann Arbor,” he said.

Each summer, Xie leads groups of Princeton undergraduates to study in China through the PIIRS Global Seminars program. “There is no better way to educate future scholars about China than by having them visit the country and teaching them firsthand,” Xie said. “Some students arrive at Princeton having studied Mandarin in high school. Even those who have never studied Chinese are ready for new challenges.”

These summer trips, combined with regular visits to monitor the progress of the CFPS and advise graduate students at the five universities where he serves as an adjunct or visiting professor, mean that Xie spends about a quarter of each year in China. But that is as it should be, he said.

“You need to visit often or you might miss something.”