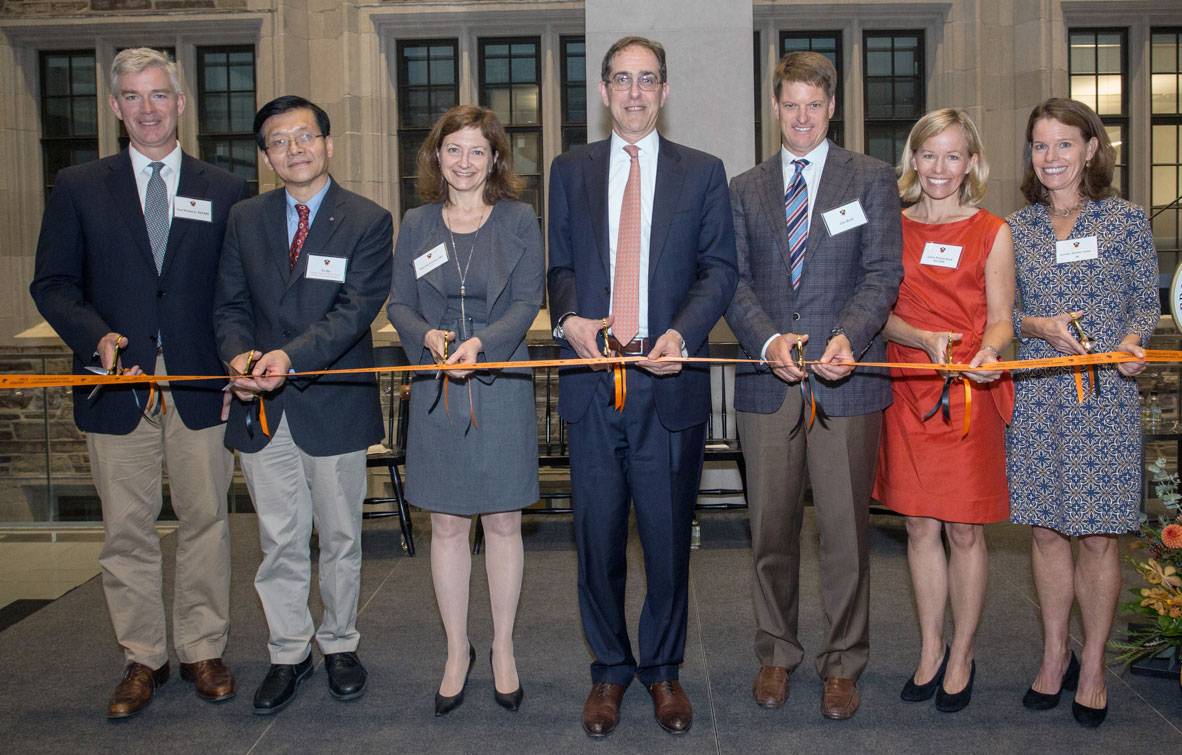 A gift from the Wythes family — Marcia Wythes, Jennifer Wythes Vettel, Paul Wythes Jr. and Linda Wythes Knoll — has named the University’s Center on Contemporary China in honor of former trustee Paul Wythes of the Class of 1955 and his wife, Marcia.

“Paul Wythes provided thoughtful counsel and had a profound impact on Princeton during his 14 years as a trustee,” said President Christopher L. Eisgruber. "He and Marcia have been great friends to this University and to education in general. I am deeply grateful to the Wythes family for their generosity and delighted with the very fitting tribute they have created. The Paul and Marcia Wythes Center on Contemporary China will bring together students, faculty and visiting experts to explore the sociology, culture, political structure and economy of a nation that has a tremendous impact on the world.”

The Paul and Marcia Wythes Center on Contemporary China is at the core of Princeton’s efforts to deepen our understanding of China, a nation of tremendous global influence that has undergone intense societal changes in recent decades.

The center, established in 2015, is distinguished by its emphasis on a quantitative approach to social science research — one that gathers and analyzes data from sources such as social surveys, administrative records and internet traffic — to empirically explore different aspects of contemporary China. It also provides an institutional home for interdisciplinary collaboration and brings together faculty and students with expertise and interest in China.

“The Wythes family has helped advance our study of social phenomena in China within its historical, cultural, political and economic context,” said the center’s director, Yu Xie, the Bert G. Kerstetter ’66 University Professor of Sociology and the Princeton Institute for International and Regional Studies. “Their generosity will help us understand China and other societies around the world while training early-career scholars to empirically approach social science research."

Paul Wythes, who died in 2012, graduated from Princeton with a BSE in mechanical engineering and earned an MBA from the Stanford Graduate School of Business in 1959. He was the founding general partner of Sutter Hill Ventures, one of the oldest venture capital firms in the nation, established in 1964. Based in Palo Alto, California, Sutter Hill invests in technology-based startup companies; many of its investments are in China. Wythes also helped found the National Venture Capital Association in 1972, and received a lifetime achievement award from that organization.

Wythes brought his extensive investment experience to his 14 years as a trustee of Princeton, eventually serving as vice chair of the board. In 1997 he was chosen to lead a committee that studied long-term strategic issues facing the University. The resulting recommendations, known as the Wythes Report, were approved in 2001 — significantly expanding the undergraduate population and improving the policies that ensure a diverse student body defined by talent rather than means.

Wythes also served on a number of advisory councils, including those of the Department of Astrophysical Sciences, the Bendheim Center for Finance, the Center of International Studies, and the Princeton Institute for International and Regional Studies.

Marcia Wythes, who was born in China and moved to Hawaii with her family as a child, has served on the board of directors of the Boys & Girls Clubs of the Peninsula, helping to raise money and mentor the children served by the organization. She has also been a member of the Foundation Board of the University of Washington, her alma mater, and volunteered for the Cancer Prevention Institute of California and the YMCA of Silicon Valley.

“Princeton has been very important to our family, and my parents both have personal and professional connections to China,” said Jennifer. “My mother, sister, brother and I are very happy to support the University’s efforts to explore one of the world’s most influential nations and its impact on societies beyond its borders. The center is a perfect confluence for my family … Princeton and China … and I know my father would be proud.”