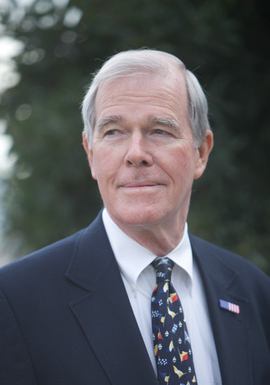 Paul Wythes, a member of the Class of 1955 and a former member of the Princeton Board of Trustees, died Oct. 30 in Palo Alto, Calif. (Photo courtesy of the Wythes family)

Paul Wythes, a 1955 graduate of Princeton who chaired a special trustees' committee whose work in the late 1990s resulted in expanding the University's undergraduate body, died last week in California.

Wythes, founder of one of Silicon's Valley's early venture capital firms, Sutter Hill Ventures, died Oct. 30 at Stanford University Hospital and Clinics in Palo Alto, the company said. He was 79.

Wythes was on the Board of Trustees at Princeton University for 14 years and served as vice chair.  He was also a vice chair of the trustees' search committee that in 2001 recommended that Shirley M. Tilghman become the 19th president of Princeton.

In 1997, Wythes was put in charge of a committee to consider a number of long-term strategic issues facing the University. They included the undergraduate financial aid program; the Graduate School; faculty, staff, physical and financial resources; technologies and the library.

The "Wythes Report" submitted to the board in 2000 recommended that Princeton increase the number of undergraduates to 5,100 from 4,600 "to enhance the quality of the overall educational experience at Princeton and make more effective use of the University's extraordinary resources." Trustees approved the plan, and today's student body is only slightly larger at 5,200.

"Paul had a significant influence on 21st-century Princeton," said President Shirley M. Tilghman. "The seminal report that bears his name ensured that our University would continue to meet the goals that he defined so well — 'to be both one of the leading research universities and the most outstanding undergraduate college in the world.' We are a better institution for his work, and we will miss his thoughtful counsel and are grateful for his generous philanthropy. To his wife, Marcia, and to his family, friends, and classmates, I would like to extend my own and Princeton’s deepest sympathy."

Wythes made many gifts to the recently concluded Aspire campaign, foremost among them the Paul M. Wythes '55 P86 and Marcia R. Wythes P86 Professorship in Computer Science. His giving also benefited the Benjamin H. Griswold III, Class of 1933, Center for Economic Policy Studies; the James Madison Program in American Ideals and Institutions; the Princeton Institute for International and Regional Studies; the Princeton Varsity Club; and several athletics programs. Other gifts include the Paul M. Wythes '55 Professorship in Engineering and Finance as well as support for scholarships and financial aid.

Wythes was born in Camden, N.J., in 1933 and grew up in Haddonfield. After receiving a degree in mechanical engineering from Princeton, he spent two years in the U.S. Navy and graduated with a master's of business administration from Stanford University in 1959.

He worked for Minneapolis-Honeywell Regulator Co. in San Francisco and later joined Beckman Instruments in Fullerton, Calif. He founded Sutter Hill Ventures in Palo Alto in 1962 and spent 48 years there, leading investments in a number of companies including Tellabs, Xidex, Linear Technology, Qume and AmeriGroup.

Wythes received the National Venture Capital Association's Lifetime Achievement Award, the U.S. Naval Supply Corps Distinguished Alumnus Award and accepted the Dow Jones Equity Hall of Fame Award given to Sutter Hill as the outstanding venture capital firm for 2006. He was president and director of the Western Association of Venture Capitalists, spent 12 years as an Overseer Board member of the Hoover Institution at Stanford and a 22-year board member of the T. Rowe Price Mutual Fund Complex in Baltimore.

Wythes is survived by his wife, Marcia; their three children; and eight grandchildren.

A memorial service will be held at the Menlo Park Presbyterian Church on Nov. 13. Donations may be made to Eastside College Preparatory School, 1041 Myrtle Street, East Palo Alto, CA 94303.