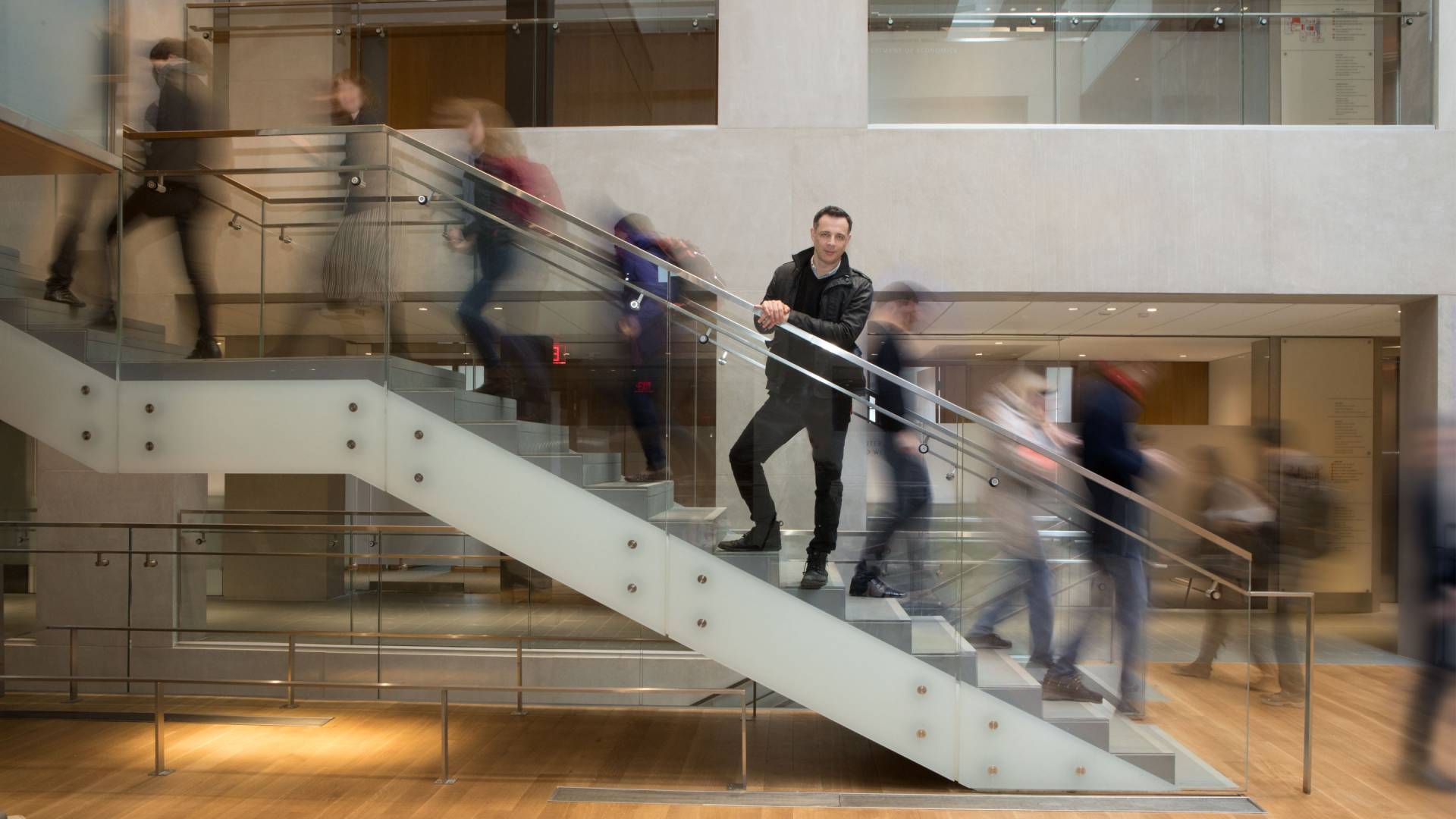 Dalton Conley, Princeton's Henry Putnam University Professor in Sociology, examines the complicated ways genes and environment interact to affect who moves up — and down — the socioeconomic ladder.

Dalton Conley was just a kid in 1970s New York, but lessons about race and class came quickly.

He was one of the only white kids among his friends amid the predominantly African American and Latino public housing projects on the Lower East Side. At his local elementary school, there were segregated classes for African American, Latino and Chinese students, but no obvious fit for him. Later, at another school in a more affluent part of the city, he was surrounded by other white students but found himself lost amid their wealth.

Questions about the importance of race and class crystalized when his friend Jerome was struck by a stray bullet while walking down the street and paralyzed for life at age 13.

"That event haunted me for the rest of my life, and really, really drove me to ask the questions that I ask in my day job," Conley said in a 2015 TEDx talk at the University of North Carolina. "Why did he end up getting shot and I ended up getting to go to college? Why was I so much more advantaged than my neighbors for the most part?"

The search for answers has driven Conley, Princeton's Henry Putnam University Professor in Sociology, to combine the power of new genetic tools with traditional social science in research that goes beyond the nature versus nurture debate to focus on how genes and environment interact to shape life outcomes.

"In my mind, it's all very much trying to get at the same big question of how social status and health get transmitted from parents to children," Conley said. "I'm like a dog trying to get at the marrow of a bone, focusing on different factors and methodological questions to find the answer." 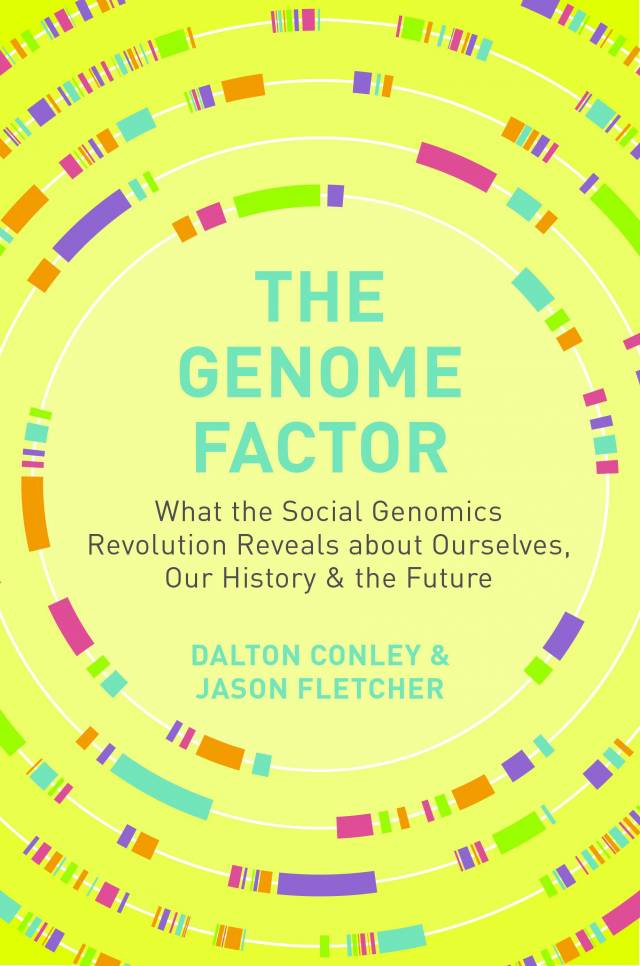 Conley's new book, co-written by Jason Fletcher of the University of Wisconsin-Madison, explores the latest findings from the intersection of genomics and social sciences.

Conley joined the Princeton faculty in fall 2016. He is also affiliated with the Office of Population Research, the Center for Health and Wellbeing, and the Kahneman-Treisman Center for Behavioral Science and Public Policy.

In 2005, Conley became the first sociologist to win the National Science Foundation's Alan T. Waterman Award, given annually to one young researcher in any field of science, mathematics or engineering. He was named a Guggenheim Fellow in 2011. In April, he was named a member of the American Academy of Arts and Sciences.

This semester, he is teaching two graduate seminars in sociology, one on techniques and methods in social science and one in which graduate students prepare a quantitative paper based on their research.

"I'm very much in the middle of graduate training in terms of teaching this seminar where grad students work on a quantitative paper," Conley said. "I'm kind of their coach. That exposes me to all the grad students. That's the biggest change for me about coming to Princeton and the best thing about it."

Conley explores the latest findings from the intersection of genomics and social sciences in the new book "The Genome Factor: What the Social Genomics Revolution Reveals about Ourselves, Our History & the Future" (Princeton University Press, 2017), along with co-author Jason Fletcher, professor of public affairs, sociology, agricultural and applied economics, and population health sciences at the University of Wisconsin-Madison.

"In a little more than one hundred years, a gene — a discrete unit of heredity — has been transformed from a vague notion among a small group of scientists to almost a ubiquitous news item and consumer commodity," the authors write. "The black box of the genome has been cracked open by inexpensive genotyping platforms …. We can all now drink from a firehose of new data and research findings aimed at describing the underlying genetic architecture of human health and well-being."

Among the diverse, yet interconnected, findings: racial categories recognized today aren't supported by the real genetic differences among humans based on their ancestry. Genes are a factor in who gets ahead in society, often acting as engines of mobility that counter social disadvantage. While people are increasingly marrying partners with similar education backgrounds, humans are becoming more genetically diverse.

"We hope that readers see the promise as well as the perils of combining genetic and social science analysis," Fletcher said. "We provide a lot of examples of ongoing work, but also want to show the reader how we think about the larger issues that will remain as genetics progresses. We seek to show the reader how to look through a social science lens when thinking about genetic discoveries."

"He represents exactly the kind of person I think we need to move forward a richer and deeper understanding of one of the great social questions of our age: How do you mitigate the effects of past deprivation, past injustice, past disparities in such a way that people begin life with more of an even footing?" Notterman said. "Those answers are partly based on a clear understanding of social measures, but they also increasingly seem to be based on the interaction between genetic factors, social measures and the external environment. Dalton can really move the field forward."

Conley earned his bachelor's degree in humanities from the University of California-Berkeley, and a Ph.D. in sociology from Columbia University. He spent a year on the faculty of Yale University before moving to New York University, where he would remain for 16 years.

His first book, "Being Black, Living in the Red: Race, Wealth and Social Policy in America" (University of California Press, 1999), showed that many differences between blacks and whites in the United States stem not from race but from economic inequalities that have accumulated over the course of history. This discrepancy in wealth holdings leads to advantages for whites in the form of better schools, more desirable residences, higher wages and more opportunity to save and invest, Conley found.

In "The Starting Gate: Birth Weight and Life Chances" (University of California Press, 2003), Conley and co-authors Kate Strully and Neil Bennett examined the example of birth weight — which is often accompanied by social risk factors such as minority racial status, low education, young maternal age and low income — to highlight the challenges of sorting through biological and social factors that affect life outcomes.

The research in those books and other work Conley conducted to that point used the traditional tools of social science, such as surveys and natural experiments. But he couldn't be sure that the factors he identified as related to outcomes were the keys or if they were masking some other, unknown influencer. One of the most likely hidden variables: genetics.

So Conley went back to school, earning a second Ph.D., in genomics, from New York University in 2014. Now, taking advantages of recent advances in human genotyping, he uses polygenic scores that distill information from across the genome to measure an individual's genetic predisposition for a certain characteristic, such as above-average height or autism. The scores vary in their predictive ability but offer important evidence to add to work on social influences for the same factors.

For example, Conley and colleagues used polygenic scores to find that genes began to play a greater role in the height and body mass index of Americans over the 20th century, while their significance decreased in educational outcomes and occurrence of heart disease. The findings were published last year in the journal Scientific Reports.

"We're all responding differently to environmental influences and shocks happening to us all the time in society, but we haven't had any idea who was going to respond how," Conley said. "Now we're uncovering the genetic tools needed to answer those questions."

Conley's work on gene-environment interaction represents an important advance, said Sara McLanahan, the William S. Tod Professor of Sociology and Public Affairs and director of the Center for Research on Child Wellbeing.

"This work on gene-environment interaction is exciting because it goes beyond the old debate of nature versus nurture, and it brings in potentially a much more powerful role of the social environment," said McLanahan, whose research has examined policies aimed at improving the education and health of children. "By understanding how a person's genes interact with their environment, we're really going to be able to tailor social interventions much more effectively."

For example, an intervention might be a change in the way children are taught to read. On average, the change might have only a small impact on children's performance. But by including information on children's genetics, researchers might learn that children with certain genotypes benefit greatly from the intervention while others don't benefit at all.

"The average effect we've been measuring may be a huge underestimate of the potential power of an intervention for the kids who are genetically suited for it," McLanahan said.

The future for the integration of social science and genetics is both exciting and full of questions, Conley and Fletcher write in "The Genome Factor": "Will we extend ongoing efforts in personalized medicine to create personalized policy? Will we use our new molecular understanding of human difference to fundamentally transform how we view and use race/ethnicity categories around the world? How will we insure that these new discoveries do not further widen social inequalities, as the rich take advantage of genetic information at a faster pace than the poor?"

"I feel like we're really only at the beginning of this process," Conley said.