Stressful upbringings can leave imprints on the genes of children as young as age 9, according to a study led by Princeton University and Pennsylvania State University researchers. Such chronic stress during youth leads to physiological weathering similar to aging.

A study of 40 9-year-old black boys, published in the Proceedings of the National Academy of Sciences, shows that those who grow up in disadvantaged environments have shorter telomeres — DNA sequences that generally shrink with age — than their advantaged peers. The researchers also report that boys with genetic sensitivities to their environment have shorter telomeres after experiencing stressful social environments than the telomeres of boys without the genetic sensitivities. These sensitivities are based on gene variants related to the serotonin and dopamine pathways — neurotransmitters essential for relaying information between the brain and body.

"African American children have really not yet been studied through this context," said co-author Sara McLanahan, Princeton's William S. Tod Professor of Sociology and Public Affairs. "Previous work has mostly focused on middle-class whites. Our study takes a different approach and really highlights the importance of early intervention to moderate disparities in social and educational opportunities."

The research team was led by Daniel Notterman, lead author and a visiting professor of molecular biology at Princeton and vice dean for research and graduate studies at the Pennsylvania State University's College of Medicine, and comprised of collaborators from Columbia University, the University of Michigan and the University of York in the United Kingdom. The team analyzed data collected by the Fragile Families and Child Wellbeing Study, a Princeton and Columbia study pioneered by McLanahan that includes 5,000 children born in 20 large American cities with populations over 200,000 people between 1998 and 2000. These children and their parents, who come from a wide range of social backgrounds, were interviewed at regular intervals between the child's birth and age 9. Saliva DNA samples were collected when the children were 9 years old.

The researchers wanted to focus on African American boys because past studies have shown that boys may be more sensitive to their environment. They restricted their sample to 40 boys who participated in the Fragile Families study and met the following criteria: they had provided saliva samples at age 9; their mothers self-identified as black or African American; and complete information was provided about their social environments. Of the sample, half of the boys were raised in disadvantaged environments, which the researchers characterized by such factors as a low household income, low maternal education, an unstable family structure and harsh parenting. 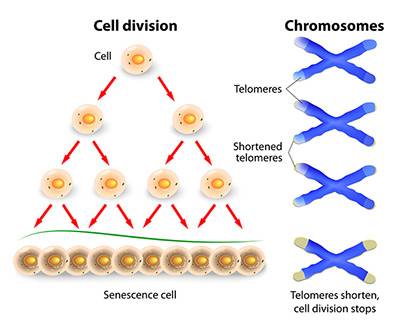 African American boys growing up in disadvantaged environments have shorter telomeres — DNA sequences related to aging — than their advantaged peers by age 9, a study shows. Telomeres live at the end of chromosomes, which are found in cells. They vary in length by person, shrinking with age. Growing up in disadvantaged environments quickens this process for black boys, causing physiological weathering. Cellular senescence, shown at left, occurs when cells no longer divide in vitro, leading to aging. (Photo credit: Designua/Shutterstock.)

To measure telomere length, the researchers analyzed the saliva DNA provided by the boys. These telomeres, which live at the end of each chromosome, protect the ends from damage and vary in length by person, shrinking with age. Through their analysis, the researchers found that living in a disadvantaged environment was associated with 19 percent shorter telomeres by age 9. For boys predisposed to being sensitive to their environment, this negative association was even stronger.

"Our report is the first to examine the interactions between genes and social environments using telomeres as a biomarker," Notterman said. "We also demonstrate the utility of using saliva DNA to measure children's telomere length. This is important because most telomere research uses blood, which is much more difficult to collect than saliva. Using saliva is easier and less expensive, allowing researchers to collect telomere samples at various points in time to see how social environment may be affecting DNA."

Arline Geronimus, a professor at the University of Michigan who studies population health but was not involved in the study, said this work adds to the growing body of research related to the role of chronic stress in health inequalities, especially among the poor. Geronimus, a pioneer in research on physiological weathering, said she was particularly struck by how quickly the effects of chronic stress can be seen.

"I think it's very striking that these findings are in children at age 9, because you are talking about accelerated aging or stress-mediated wear and tear on your body, which make you more vulnerable to all kinds of illnesses and diseases. To say that you can see this by 9 years old is a very strong statement," Geronimus said.

The paper, "Social Disadvantage, Genetic Sensitivity and Children's Telomere Length," was published online April 7 in the Proceedings of the National Academy of Sciences. Funding for the study was provided by the Eunice Kennedy Shriver National Institute of Child Health and Human Development and the Penn State Clinical and Translational Science Institute.

Michael Hotchkiss contributed to this report.