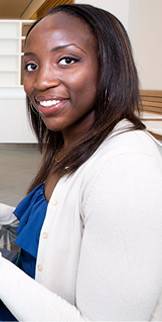 Obianuju "Juju" Obioha's senior thesis explores perceptions of status and race and the relationship between explicit and implicit beliefs. She found evidence that white people have a more difficult time associating black people with high-status jobs than they do associating white people with the same jobs.

The race labels and the job statuses switch places as you go, but the task remains the same — match, as quickly as you can, the job title with its status or face with its label.

The results of this implicit association test, or IAT, are a key piece of Obianuju "Juju" Obioha's senior thesis at Princeton University. Her thesis explores perceptions of status and race and the relationship between explicit and implicit beliefs.

"My hypothesis was that white people have an easier time associating low-status jobs with blacks and high-status jobs with whites," said Obioha, who is a psychology major from Potomac, Md. "People in the past have indicated on various implicit and explicit measures that they see black people in a more negative way than white people." 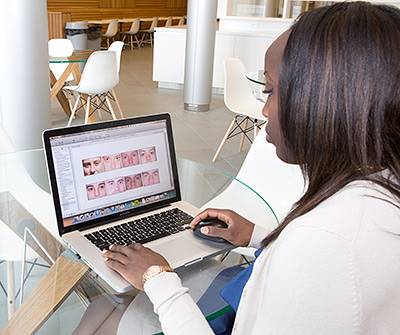 Obioha, a psychology major who is pursuing a neuroscience certificate, gathered data for her thesis using a computer-based study known as an implicit association test that utilized a series of photos and the names of jobs to test participants' implicit associations.

Obioha said she wanted to build on previous research and examine how race and social status intertwine to affect people’s feelings toward others.

"My argument was that subclasses of blacks are viewed differently," she said. "People look at someone like President Obama very differently than they do a homeless black man on the street. It sounds pretty intuitive, but I don't think enough research in the past has looked at it in this way."

The IAT measures how long it takes participants to correctly match a job title with its status and a face with its racial label. Differences in reaction times — measured in hundreds of milliseconds — are an indication that the participant has a harder or an easier time making a certain association. For example, a slower reaction time in correctly linking high-status jobs and black faces may indicate that the participant has difficulty associating a black person with that type of job.

Her hypothesis found support in results from IAT experiments Obioha conducted by computer with 72 Princeton students and 65 members of the public recruited online. White participants found it more difficult to associate black people with high-status jobs than white people. Black students didn't show any bias on the IAT. (There weren't enough black participants from the general public to make a finding.)

"Most people aren't even aware they have these attitudes, and they don't necessarily come out in behavior," Obioha said. "But it can be helpful to understand these attitudes are there."

"No one has shown the implicit association between race and status of jobs," said Fiske, the Eugene Higgins Professor of Psychology and professor of psychology and public affairs. "People more easily associate whites with high-status jobs and blacks with low-status jobs. The implications are obvious, from hiring biases to micro-aggressions in daily life."

Among Obioha's other findings: The implicit attitudes uncovered by the IAT didn't correlate with results from a questionnaire she administered separately to the participants about their explicit beliefs. So findings of an implicit bias on the IAT didn't make it any more or less likely that the study participant would have explicit biases measured by the questionnaire. One explanation, Obioha said, is that the answers people give on a questionnaire about their explicit beliefs may be influenced more by what they think is acceptable to say than how they feel.

Obioha, who is pursuing a neuroscience certificate, plans to attend medical school. During her time at Princeton, she has served as a peer health adviser, a member of the Minority Association of Pre-Med Students and a mentor in the Leadership and Mentoring Program. She is also a four-year member of the Women's Rugby Football Club.

Her search for an adviser for that paper led her to Fiske, whose research addresses how stereotyping, prejudice and discrimination are encouraged or discouraged by social relationships, such as cooperation, competition and power.

They decided to continue their collaboration on Obioha's thesis, and the idea for her thesis research began to emerge as they brainstormed ideas during regular meetings.

Obioha said Fiske was very supportive of her work. Along with weekly meetings, they stayed in touch by email, and Fiske helped Obioha plan her work and refine her thoughts.

"She encourages me to think more deeply about my work," Obioha said. "She's willing to explain everything to me, from the simple to the most complex."

Fiske invited Obioha to present her ideas to members of Fiske's lab team — including graduate students, visiting scholars and undergraduates — who responded with encouragement and suggestions. Knowing it can be difficult to take good notes during such presentations, Fiske even prepared detailed notes on the discussion for Obioha.

"Juju is organized, efficient and pragmatic," Fiske said. "She makes good use of our meetings and of her time in between. No drama. A joy to advise."