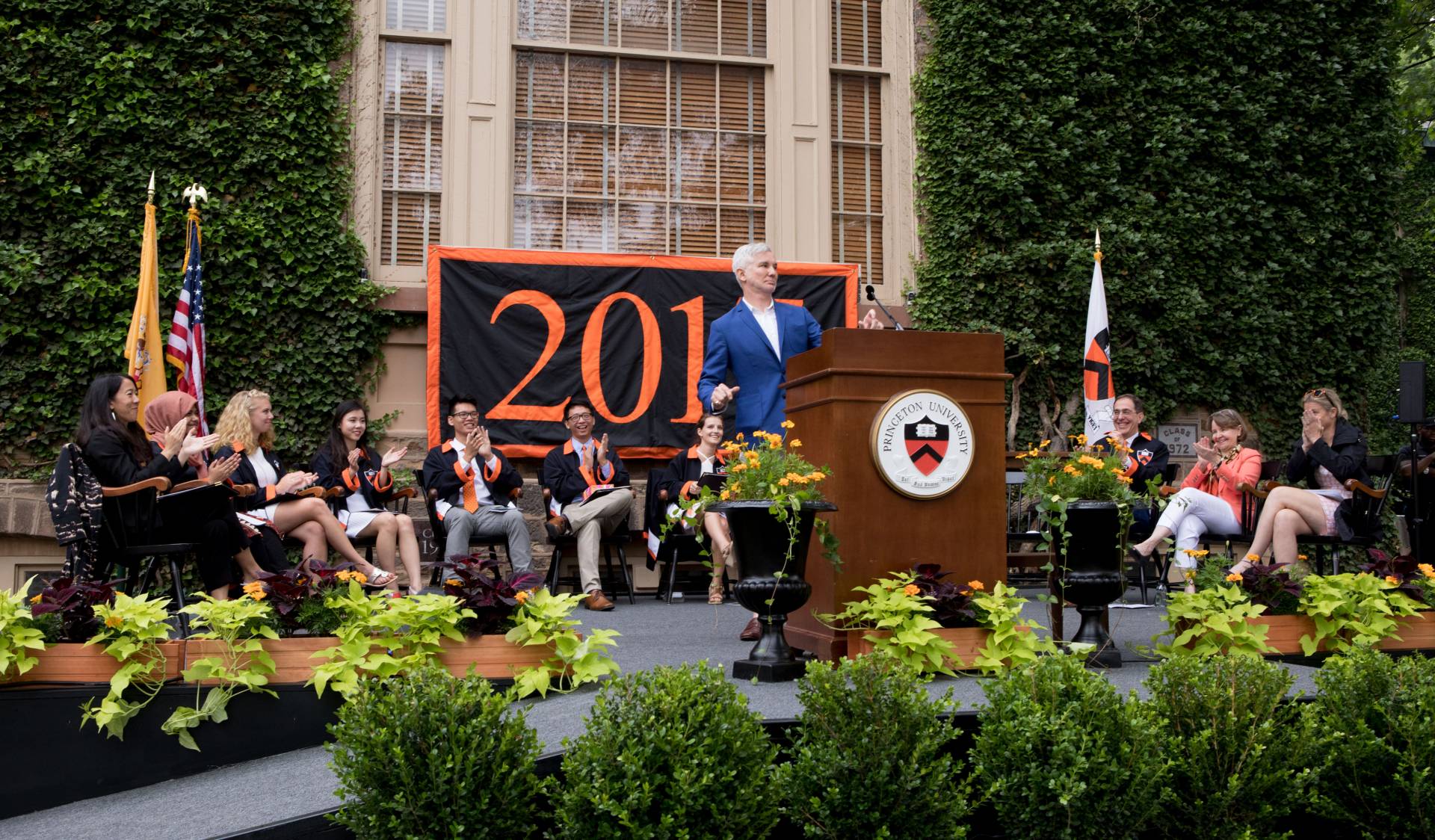 Film director Baz Luhrmann addresses Princeton seniors during the 2017 Class Day ceremony on Monday, June 5, on Cannon Green. The annual event is organized by seniors to recognize the achievements of their class.

Riffing off a famous scene in the 1962 film "Lawrence of Arabia," in which the title character is warned of his fate — "It is written" — and Lawrence replies, "Nothing is written," Luhrmann challenged the sea of seniors before him to embrace that same edict.

"Life is a blank page and anything is possible. ...[that] is your mission: self-revelation, to reveal who you really are," Luhrmann said. "It's kind of like your superpower and that, above and beyond everything else, is probably the best thing I can hand to you about life. Going through life, you need to reveal to yourself who you really are. What is the movie of your life? What is your character? What is your script? How will you play out the play of your life?"

Luhrmann's speech — itself unscripted — was the keynote of the annual Class Day event, a traditionally lighthearted ceremony organized by seniors to recognize the achievements of their class. Before the program began, seniors and family members filled Cannon Green behind Nassau Hall, snapping selfies and watching a video produced by senior Nick Sexton that featured seniors recalling their favorite Princeton moment. 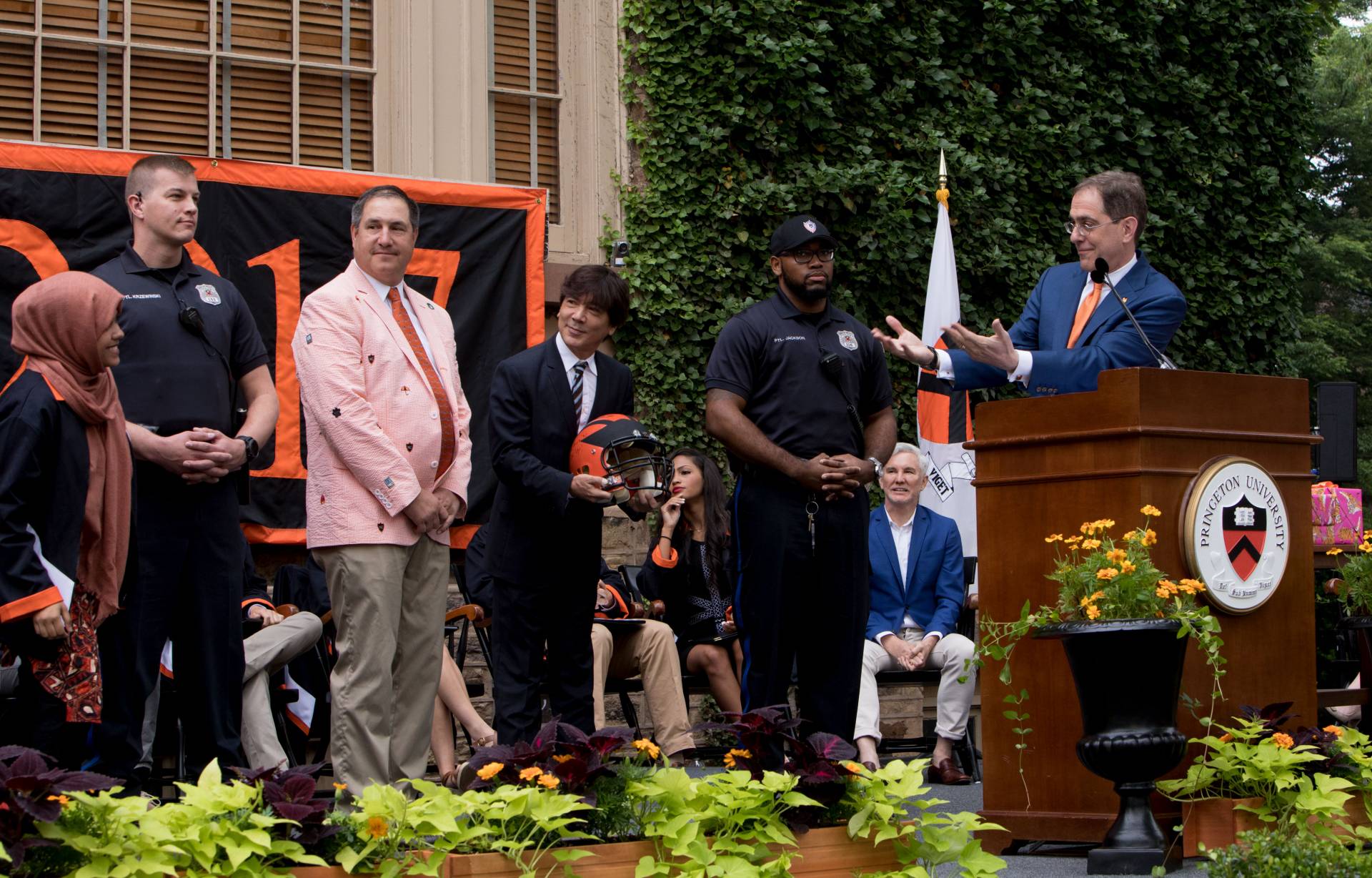 Princeton President Christopher L. Eisgruber (at lectern) informs senior Class Secretary Nusrat Ahmed (far left), that he is making a gift to the class officers of a football helmet signed by Jeff Nunokawa, a professor of English and head of Rockefeller College, and football coach Bob Surace. Nunokawa and Surace, flanked for a grand entrance by University police officers Paul Krzewinski and Darrien Jackson (from left), signed the helmet to make a connection between the literary legacy of F. Scott Fitzgerald, of Princeton's Class of 1917, with Fitzgerald's passion for football. Eisgruber gave a humor-filled presentation that included audiovisual snippets relating to Fitzgerald. Last November, Fitzgerald was named as an honorary member of the class.

This past November, the Class of 2017 extended Fitzgerald an honorary class membership at the 125th celebration of the musical-comedy theater group Triangle Club. Fitzgerald entered Princeton as a member of the Class of 1917 and was very active in the troupe.

Luhrmann drew a parallel between himself and the American author, saying both started their careers feeling alone and lost. He recounted Fitzgerald's path to New York, falling into desperation after being rejected by the girl he loved — and Luhrmann's own experience falling in love with a girl after drama school in his native Australia and losing her.

Luhrmann recalled his days as a 10-year-old pumping gas in his tiny hometown.

"I would see every kind of human being — from couples breaking up to once, the BeeGees," he said. "I learned to watch and connect, and I became absolutely fascinated with people. This ability to engage with people — or connect people creatively to make things — started to form. That was kind of my gift."

Luhrmann reached back to his childhood love of ballroom dancing to craft "Strictly Ballroom," which he described as "a funny little play" about a small-town ballroom dancing troupe that triumphs over oppression by not doing the steps handed down to them from past generations. It would go on become a film, launching his career.

Luhrmann told the seniors that "Strictly Ballroom" only happened because he "subconsciously fell back, back to the people I connected with," old friends who had started a little theater company. He said that when the students "get pulled off track," it is important to invoke what he calls his Golden Rule: "Listen to everyone. Listen to your friends. Listen to your enemies. And ask yourself not 'What do I think?' but 'What do I actually feel?' And that decision will be the right decision because you made it. Don't wait for permission." 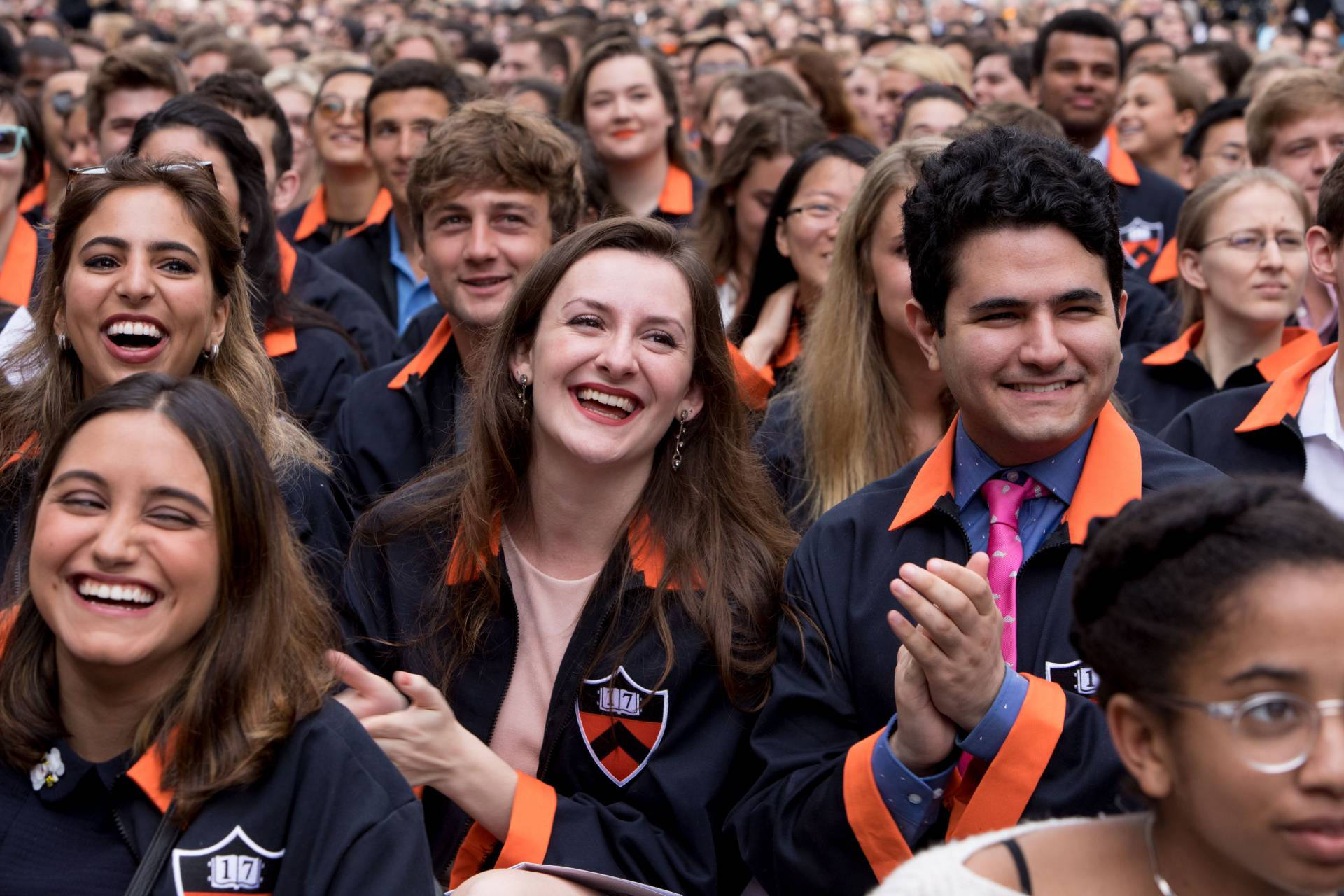 Members of the Class of 2017, wearing their new class jackets, enjoy the humor and celebratory mood of the event.

This path, Luhrmann said, will lead back you back to your true self. "I honestly believe that every single person has a unique gift, a unique chemical equation that only they have. You have to spend your whole life revealing that," he said.

He ended by challenging the students to "keep the fear at bay" as they leave Princeton to make their mark on the world. "You are tasked with an extra special mission," he said. Noting that when Fitzgerald left Princeton, in the midst of World War I, "the world was in cataclysmic change and it needed the young to explain for everyone else that the world was out of ideas. I don't want to scare you, Class of 2017, but the world is out of ideas again. It's exhausted, it's tired, it's confused. It needs you, the world needs you, your truth, your play, your superpower. The world really does need you. So get out there and make the world new again! Good luck! Blessings! Go and make the world new again!"

A humorous opening video showed Eisgruber — garbed in the iconic cream-colored suit that has become synonymous with the figure of Jay Gatsby in "The Great Gatsby" — pointing longingly across Lake Carnegie at a bright light flickering on the other side (the light at the end of Daisy's dock, a significant symbol in the book, represents Gatsby's dream of Daisy, the unattainable love of his life). As the audience erupted in laughter, Eisgruber quipped with a broad smile: "Literary references, literary references. The English majors are laughing. I'm glad somebody got those. Thank you."

He then revealed what he determined was the real reason behind the class's choice of Luhrmann as Class Day speaker. 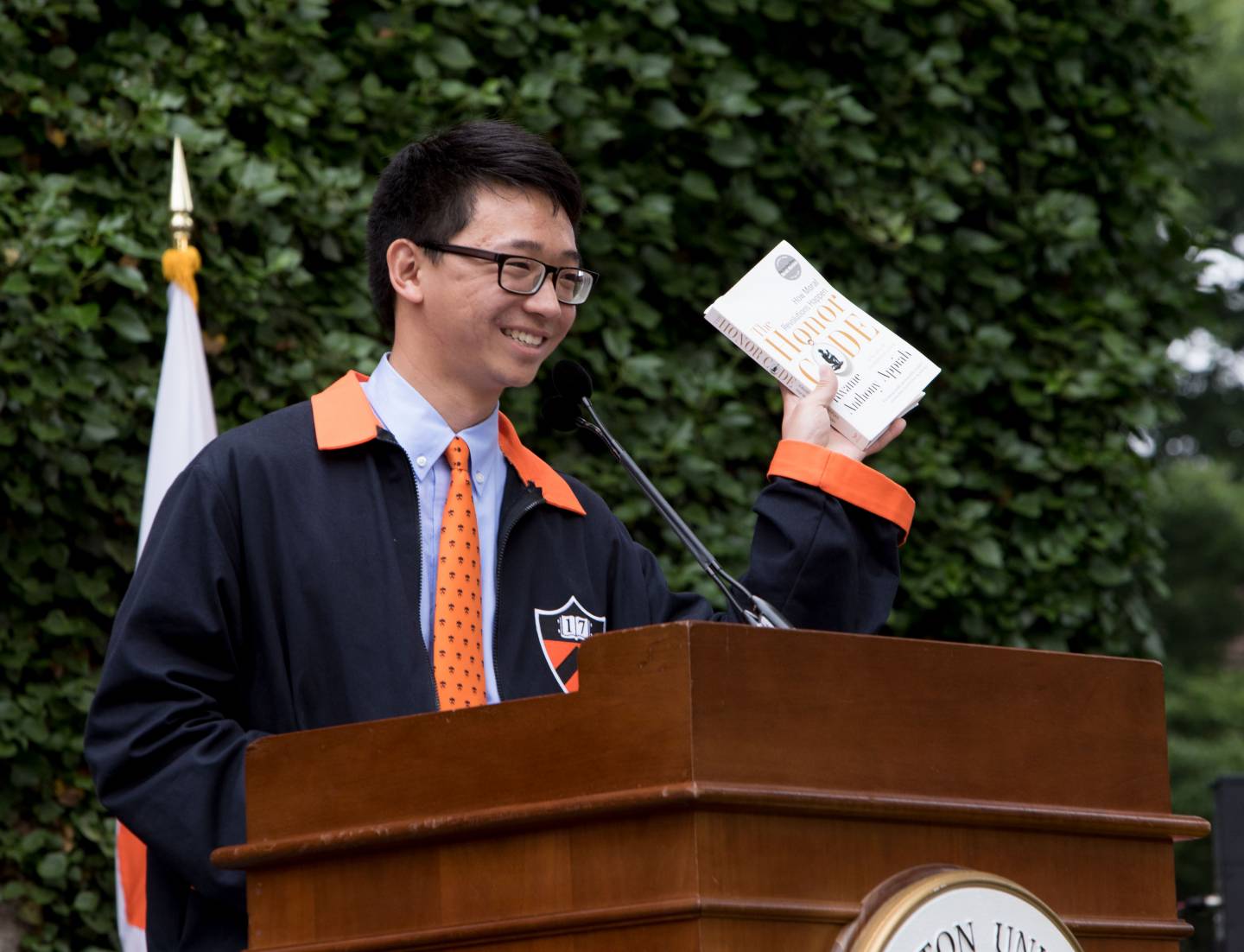 Andrew Sun, president of the Class of 2017, tells the audience that his fellow students are writing letters to themselves for a time capsule to be opened at their 25th Reunion. Sun presents one of the seven items he identifies as part of their Princeton experience — their Pre-read book, "The Honor Code," which they were asked to read as they arrived as freshmen.

Listing all of the class's athletic achievements — from Ashleigh Johnson, who served as the goalie on the gold-medal-winning women's water polo team in the 2016 Summer Olympics, to the football team's Ivy League title win this year, among the 42 Ivy League titles garnered over the last four years — Eisgruber announced: "[A]mong its many other successes, the Class of 2017 has achieved athletic successes unmatched in the history of this great University!" And, he said, Fitzgerald just might have had something to do with Princeton's football legacy.

He cited an Oct. 24, 2014, Wall Street Journal essay asserting that Fitzgerald, though cut from the football team on day one, may have invented the modern game of football — specifically, the idea of using different players on offense and defense.  Eisgruber called the article "a landmark piece of investigative reporting," drawing laughter and applause.

Connecting Fitzgerald's advice to the football team's 2017 title win, Eisgruber said: "Exactly one century after Fitzgerald's anticipated graduation date, head coach Bob Surace and the Princeton Class of 2017 would use separate offensive and defensive squads to win the Ivy League title. Coincidence? I don't think so."

He then invited to the stage Surace and Jeffrey Nunokawa, professor of English and head of Rockefeller College, escorted by uniformed public safety officers and carrying a Princeton football helmet they both had signed.

Maddie Meyers, one of the featured speakers, talks about how "graduating is gradual" and how students prepare in different ways.

Eisgruber presented the alumni officers of the Class of 2017 with the traditional keys to Nassau Hall and the helmet, admonishing them to be sure to bring the helmet to every major reunion. "I will check!" he said, to much laughter from the audience.

Indicating the parents and family members in the audience, Class President Andrew Sun opened his remarks by asking his classmates to "take a moment to recognize those special individuals in our lives with a warm round of applause."

He said that the Class of 2017 is the first class at Princeton to create a time capsule — which will include memorabilia and letters that the class members have written to themselves — to be opened in 2042, at their 25th Reunion. After listing several items to go in the time capsule, Sun reflected on the class's time at Princeton: "We've all been connected to the unity of our class under one shared experience, one shared story, one shared identity. ... Princeton will always welcome us back with open arms. I'd like to thank the Class of 2017 for a truly magical and amazing journey," he said.

Student speakers Maddie Meyers and Sukrit Singh Puri recalled the Class of 2017's journey with a mix of wit and nostalgia.

Poking fun at her generation, Meyers, of Bronx, New York, said, "As a millennial, I just don't do endings. We don't really do limits. Meyers said it's "the in-betweens" that really matter. "We can take as many pictures as we want, we can post as many statuses as we see fit, but at the end of the day, we can't skip ahead to all the clean, neat conclusions of life. If we did we'd be lost without all the advice we learned along the way."

Encouraging her classmates to see both sides of every situation after they leave Princeton, she said: "What we've hopefully come to learn is that we don't live in a world with answers that negate the questions, endings that silence beginnings. In fact, we are taught to always seek answers and continue asking questions. The two things do not oppose each other; they go hand in hand." She ended by suggesting that her classmates invoke another millennial saying: "¿Por qué no los dos [why not both]?" "Behind us and ahead of us, Princeton is there," she said. 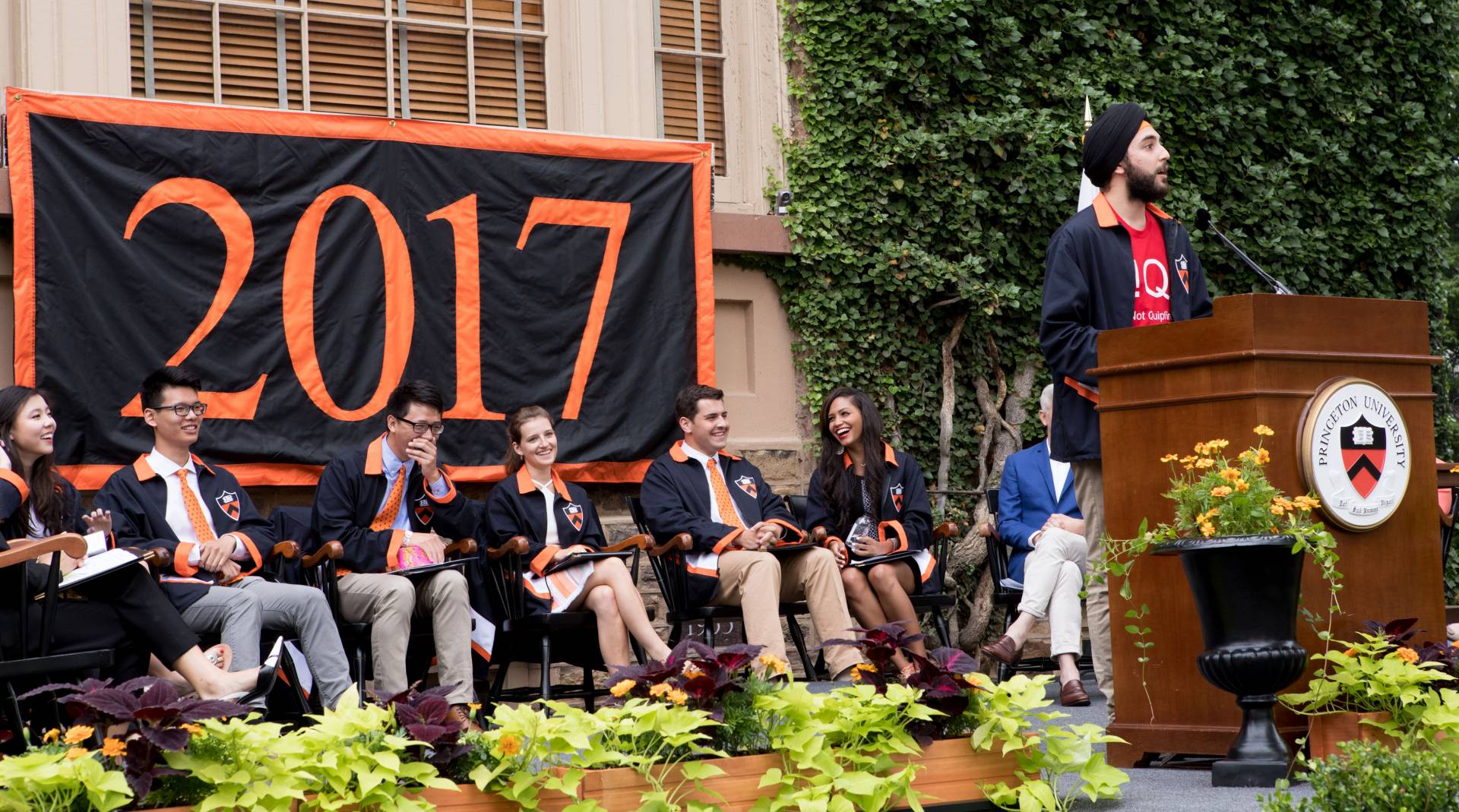 In a lighthearted address, senior Sukrit Singh Puri describes how he took to heart the encouragement to "make this your home" when he came to Princeton.

Puri, whose home is in Nepal, said he came to Princeton "feeling like a king — that admissions letter really boosted my ego." But he said that's when the real lesson of being at Princeton kicked in. "Disarmed of our hubris, we reoriented ourselves. Princeton taught us incremental growth, and that can be the most profound. As a turban-wearing Sikh student, unsure about my identity and unsure whether I would be able to find a home here, [the University] said, 'Make this your home.' This realization made me become comfortable in my own skin."

Puri said, "I know how hard it is to leave." Reflecting the University's informal motto "In the nation's service and the service of humanity," he said: "When we came in through the FitzRandolph Gates, we were tasked with the service of all nations; we leave with the responsibility of serving all of humanity. This may sound daunting ... but we know that no matter what unexpected surprises the real world throws at us, we are ready. We are ready because we are not in this alone. ... We never really leave Princeton and Princeton never really leaves us," he said.

A webcast of the Class Day ceremony will be available later online. Graduation activities will continue with the University’s 270th Commencement scheduled for 11 a.m. Tuesday, June 6. 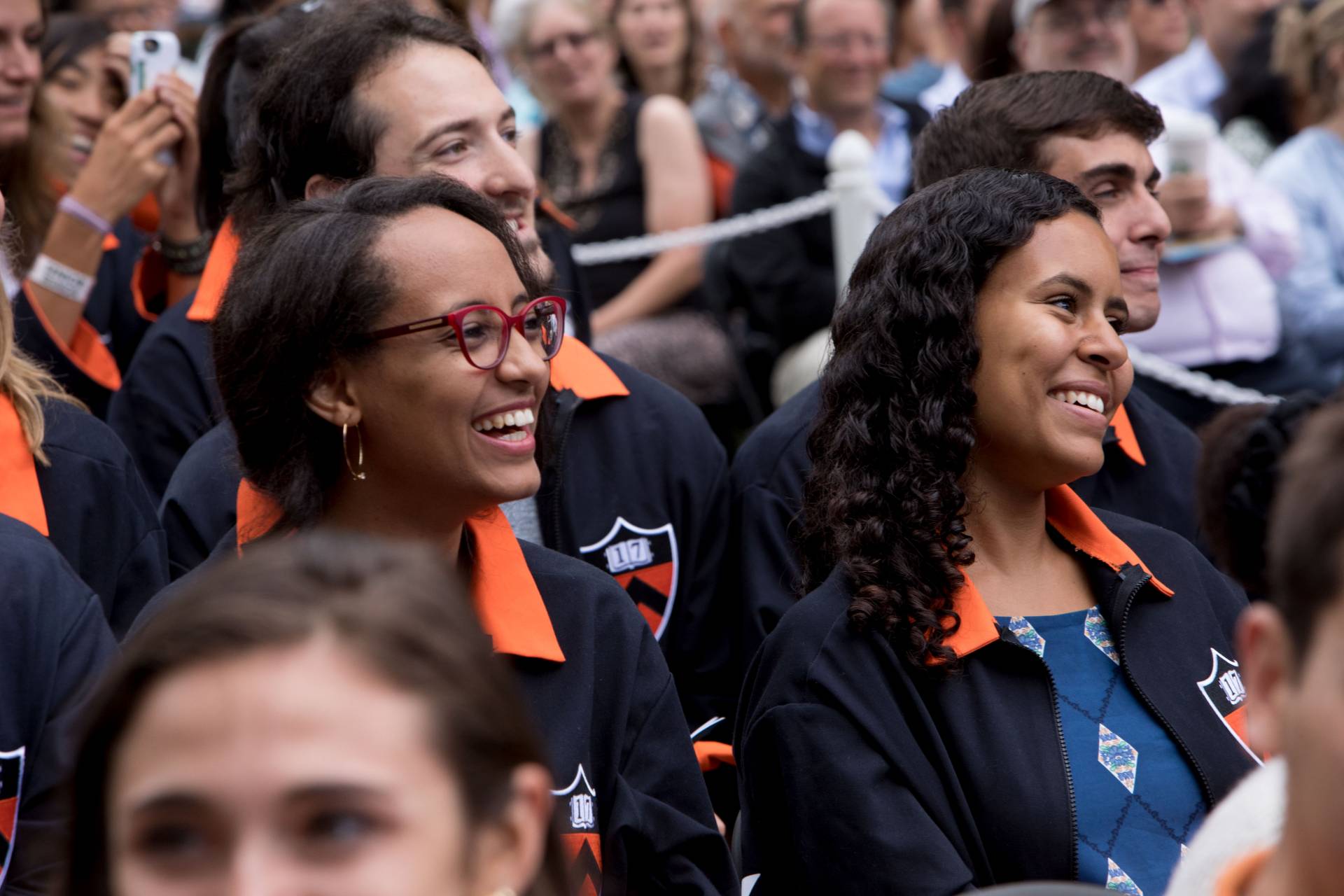 Class Day, held the day before Commencement, brings seniors together before they enter their next phase — as Princeton alumni.

The event also includes the induction of honorary class members from the University community. Princeton President Christopher L. Eisgruber (center), who started as president of the University with this graduating class, was welcomed as an honorary member. From left are students Deana Hamlin, Paulina Orillac, Andrew Sun and Jacob Cannon. 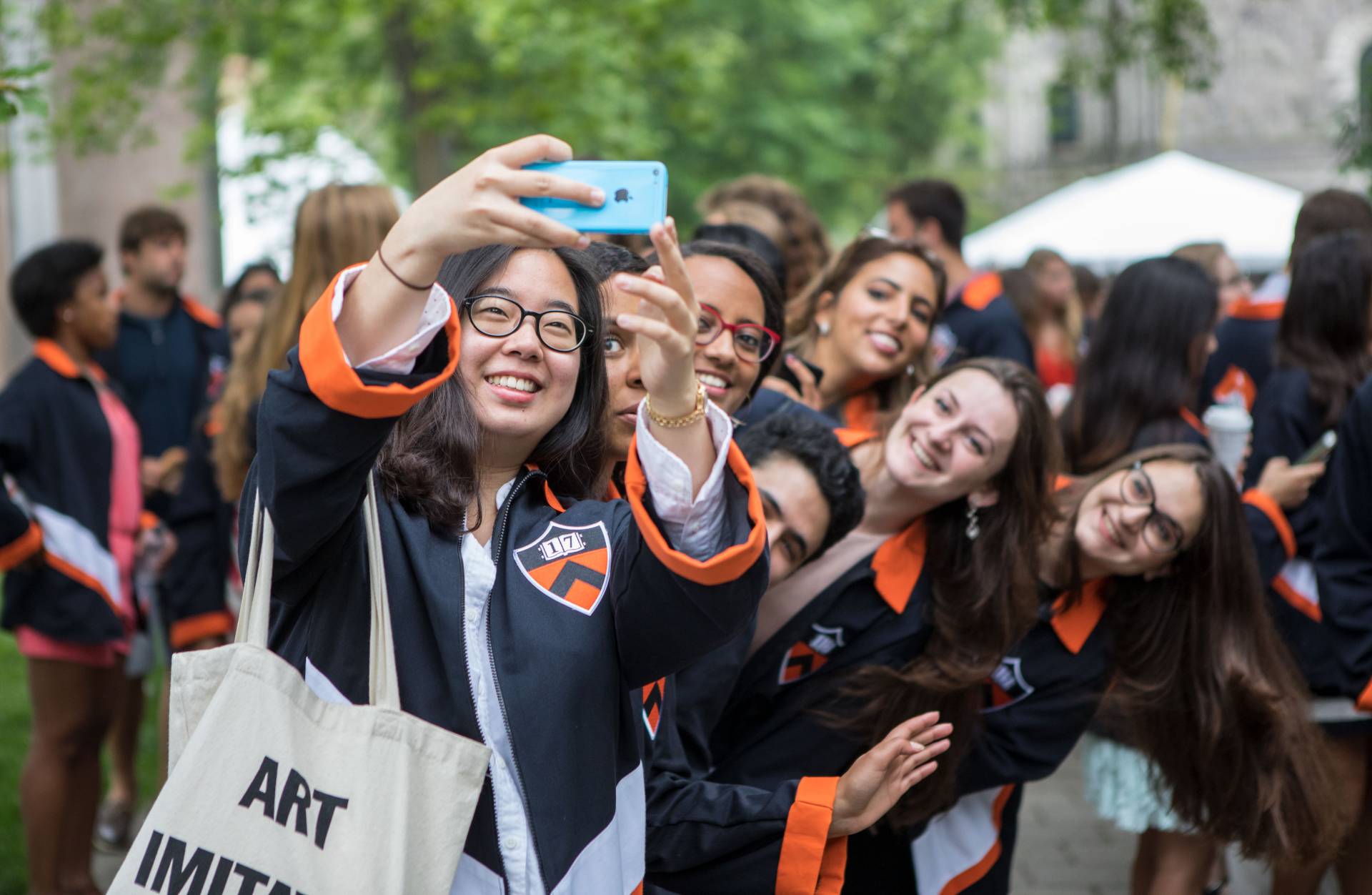 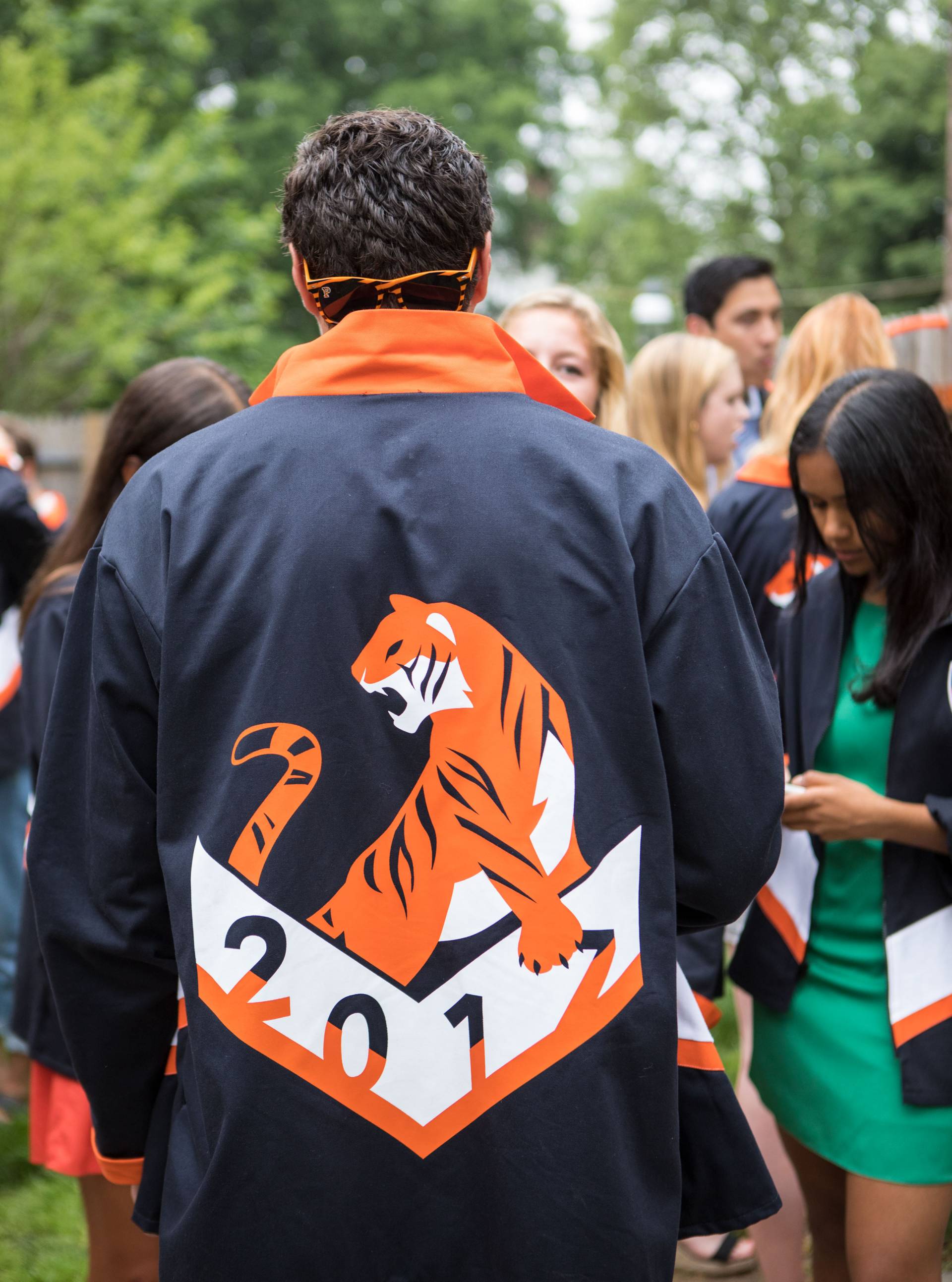 Each class designs its own jacket — often with a tiger as centerpiece.