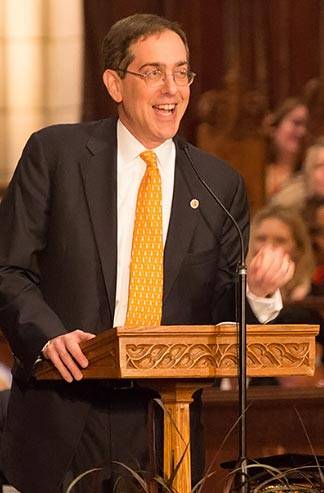 Nolan, who is known for the "The Dark Knight" Batman trilogy and the reality-versus-dream-themed thriller "Inception," called for "a respect for reality."

In an era where people are so focused on their electronic devices — case in point, a recent cross-country flight where Nolan said he was one of the few passengers to open the shade and look out the window — Nolan encouraged the Class of 2015 graduates to stop viewing reality as "the poor cousin to our dreams."

"Reality matters. It won't be transcended," said Nolan, who also is known for the films "Interstellar" and "Memento" among others. 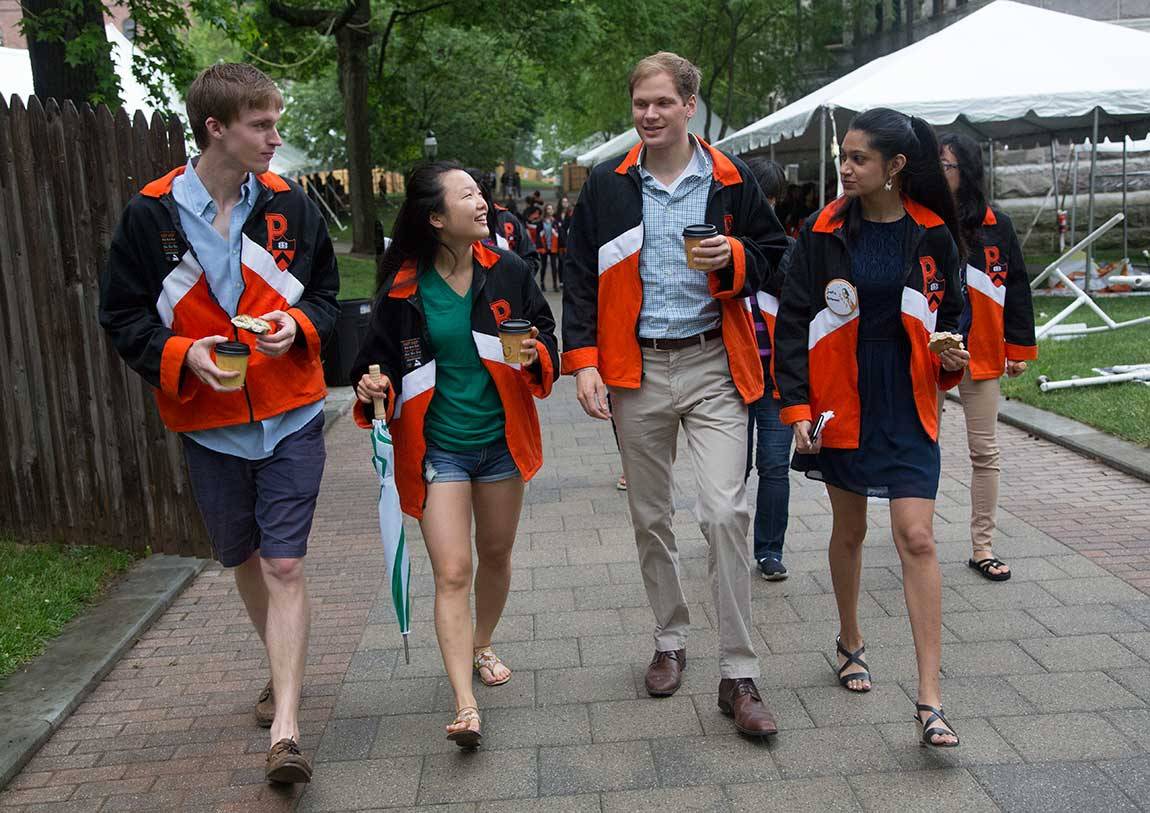 Members of the Class of 2015 walk across campus before the start of the Class Day ceremony on June 1. The annual event is organized by seniors to recognize the achievements of their class. (Photo by John Jameson, Office of Communications)

Nolan's speech was the keynote of the annual Class Day event, which this year was held in the University Chapel instead of Cannon Green due to rain.

"We had a dream of outside for this occasion. Reality intervened and we are in here," Nolan said, adding that he was impressed by the marvelous surroundings nonetheless.

The stormy weather did not dampen the spirit of the day, with students filling the chapel pews for the traditionally light-hearted ceremony organized by seniors to recognize the achievements of their class. In a nod to Nolan's films, students accessorized their black and orange class jackets with plastic Batman, Joker, Bane and Catwoman masks.

In his remarks, Nolan looked back at the 20-odd years since he graduated from University College London and the issues that faced his class such as racism, income inequality and war. While he said his generation focused on improving communication tools and infrastructure as a way to connect people and address such problems, Nolan lamented that not much has improved.

"It's very, very important that you take the elevated position that you have achieved over these four years, the advantages that this fantastic education has conferred on you, and you do everything you can with it to improve the world," Nolan told seniors. "I would love for you to look at fundamentals. What are we really doing in the world? What is the change that is being effected? How can we actually move the ball forward and progress in this way?"

Nolan said he was confident students' time at Princeton would guide them in this endeavor. 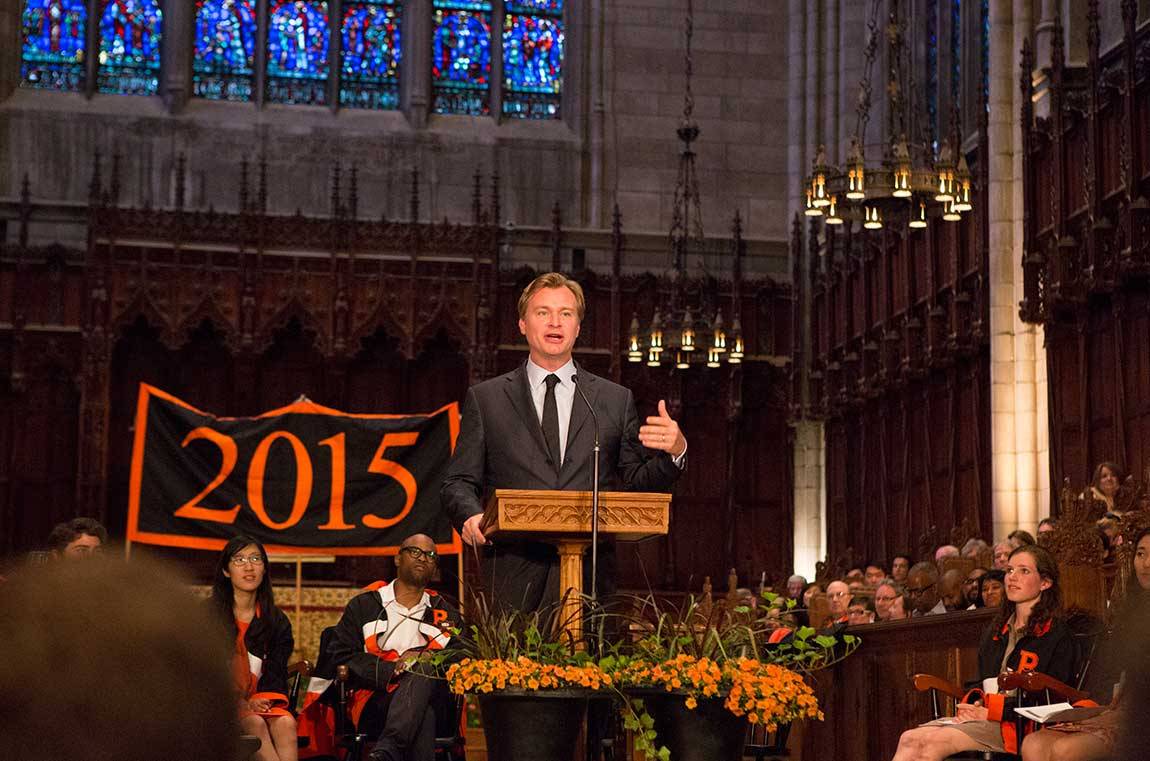 During his Class Day address, film director, screenwriter and producer Christopher Nolan challenged seniors to help improve the world by chasing their reality, not just their dreams. Nolan is known for the films "The Dark Knight" Batman trilogy and "Inception" among others. (Photo by Denise Applewhite, Office of Communications)

Preceding Nolan's speech, Princeton President Christopher L. Eisgruber and some of the student speakers played on the Batman theme in their humorous remarks.

While Eisgruber expressed admiration for Nolan's work, he said he was somewhat surprised when the senior class first announced Nolan as the Class Day speaker.

"Because, as any true Batman aficionado knows, Batman does not have an especially good relationship with tigers," Eisgruber joked, noting Batman's archenemy Bronze Tiger and the old comic book villain Tiger Shark. 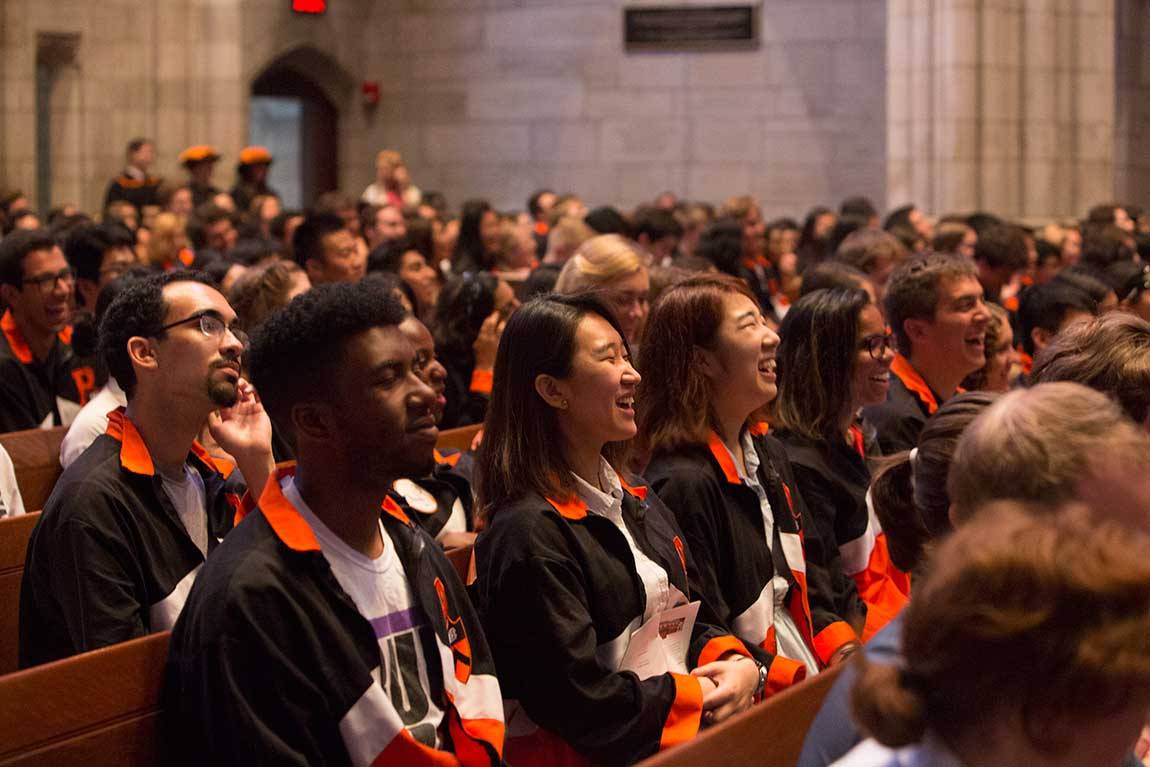 Students laugh at remarks during the Class Day ceremony, which is traditionally a lighthearted event held the day before Commencement. (Photo by John Jameson, Office of Communications)

But, Eisgruber said, he came to understand the real reason why Nolan was chosen: to settle the debate about whether Batman went to Princeton or to Yale University. While Yale may have claimed in 2011 that Batman's alter ego, Bruce Wayne, was an alumnus, Eisgruber cited a scene from Nolan's 2005 film "Batman Begins" where Bruce Wayne's trusted valet, Alfred, asks if the superhero is going back to Princeton.

"I figure you want Christopher Nolan to settle this argument and tell you that Batman went to Princeton. Maybe he will have something to say about it," Eisgruber said. "But you know what? I have something he doesn't. I have Batman's alumni records."

As the audience roared with laughter, Eisgruber asked University Archivist Dan Linke — carrying a locked briefcase and accompanied by two Public Safety officers — to come to the stage with the documents.

"They provide incontrovertible proof of a long disputed legend: Bruce Wayne was training an elite corps of Princeton alumni, known as the Mighty Tigers, to help him with his fight for justice," Eisgruber said. 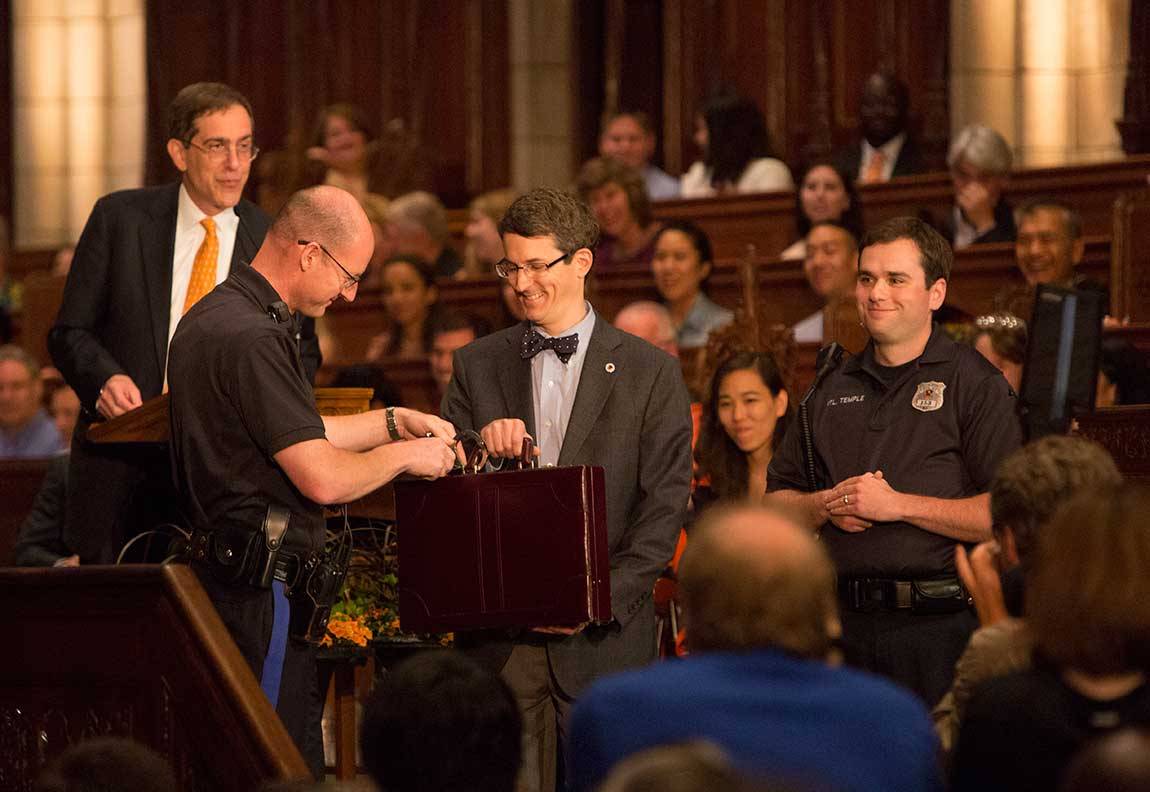 In his Class Day speech, Eisgruber (back at the lectern) joked that the real reason the senior class invited Nolan to speak was to settle the debate about whether Batman went to Princeton or Yale. Eisgruber asked University Archivist Dan Linke (center with briefcase) to help answer the question by presenting Batman's secret alumni records. Linke was accompanied by Public Safety escorts Sgt. Sean Ryder (left) and Officer Shayne Temple (far right). (Photo by John Jameson, Office of Communications)

Eisgruber then asked the seniors to stand as he inducted them into the legion of crime fighters known as the Mighty Tigers.

"Your mission, should you choose to accept it, is to safeguard forever these medallions, to protect the world from evil and to return to Princeton's campus every year at this time — because for the Mighty Tigers, every villain can be defeated, and every reunion must be attended!" Eisgruber said.

Student speakers Jake Robertson and Andrew Sondern recalled the Class of 2015's journey with a mix of wit and nostalgia.

Robertson, a Slavic languages and literatures major from Lombard, Illinois, focused on the University's maternal qualities.

"[Moms] are responsible for our moral, intellectual and physical education. In this way, Princeton is very much like a mom," he said. "Sure, it's going to be hard to kiss this 269-year-old mom goodbye, but it's not forever. She'll never be far away, pulling us back from time to time, calling us to say how much she misses us and to demand more in Annual Giving." 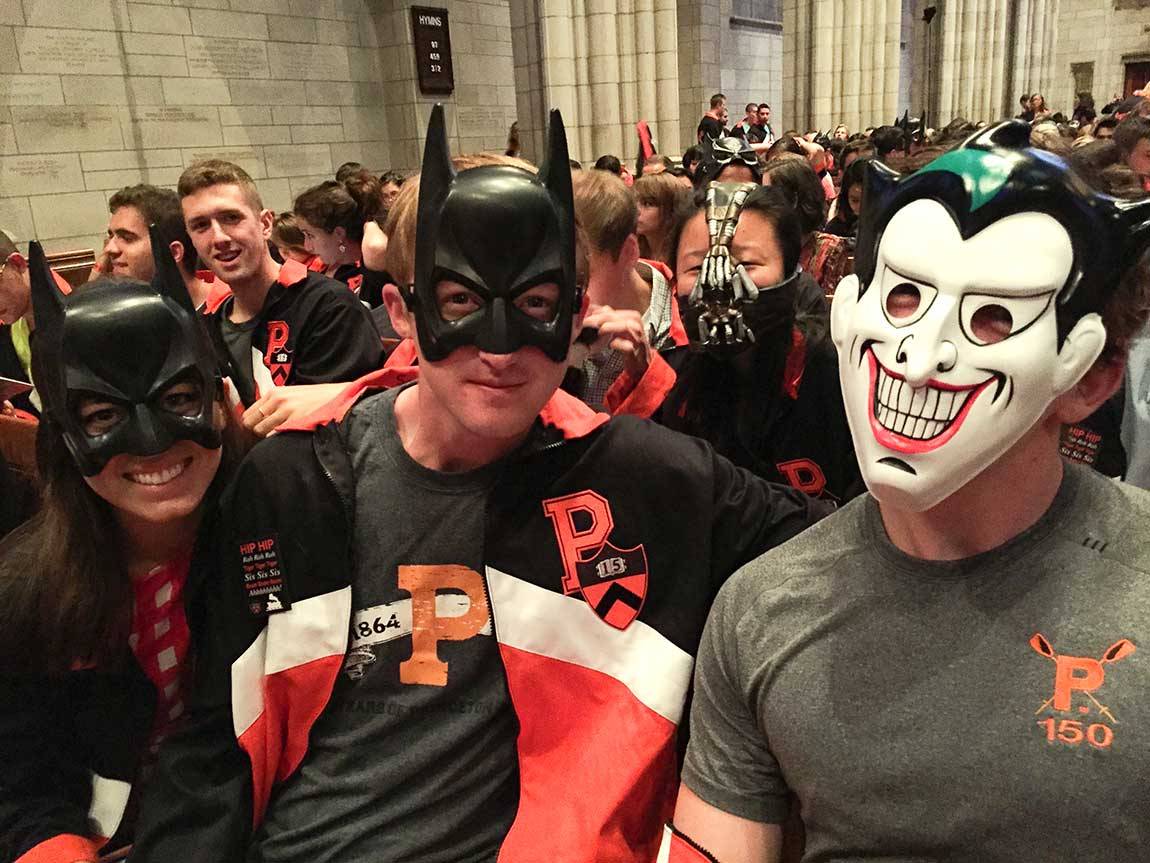 In a nod to Nolan's films, students in the audience accessorized their black and orange class jackets with plastic Batman, Bane and Joker masks. (Photo by Ryan Maguire, Office of Communications)

Sondern joked about the frequent comparison of Princeton's buildings to the fictional Hogwarts School from "Harry Potter."

"It's hard not to think of Princeton as Hogwarts, this magical place where your dreams can come true," said Sondern, a history major from Kansas City, Kansas.

The event ended with Nolan putting to rest any question about Bruce Wayne/Batman's alma mater.

"There has been a certain amount of talk about Batman. But no one has pointed out the most important thing about Bruce Wayne: which is, yes, he attended Princeton, but he didn't graduate. So as of tomorrow, you are all already better than Batman," Nolan concluded as the chapel filled with thunderous applause.

A webcast of the Class Day ceremony will be available later online. Graduation activities will continue with the University's 268th Commencement scheduled for 11 a.m. Tuesday, June 2. 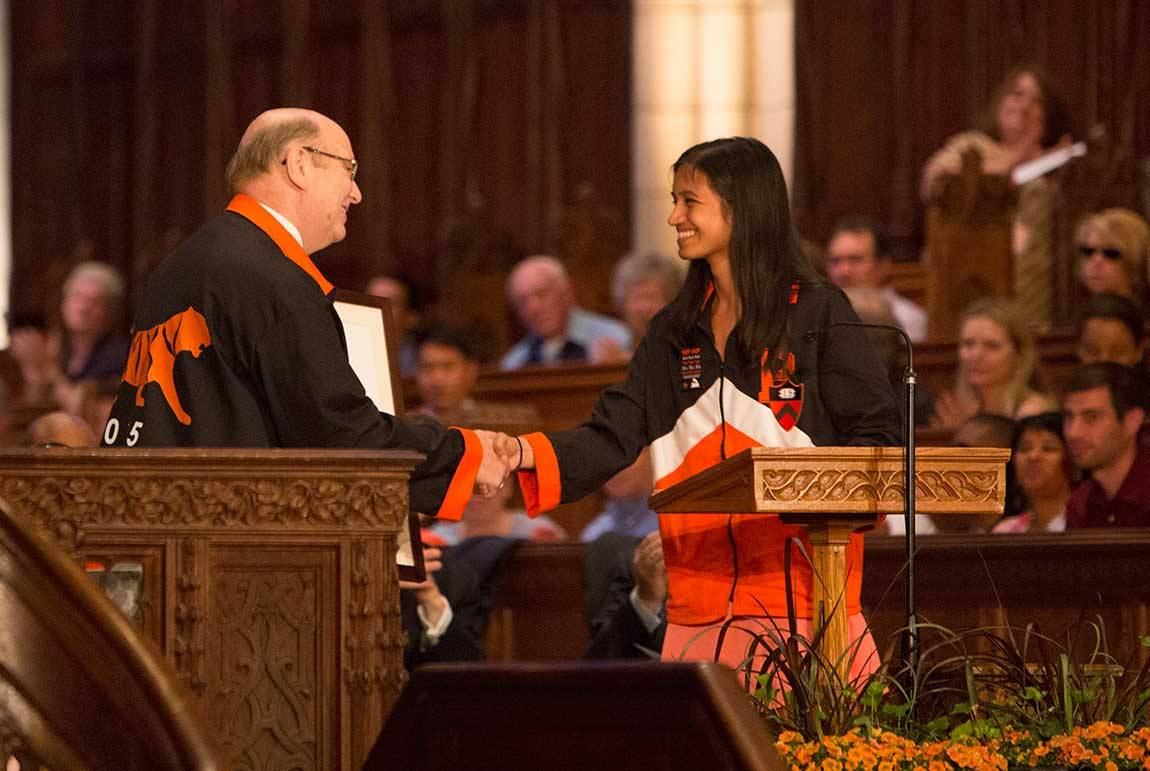 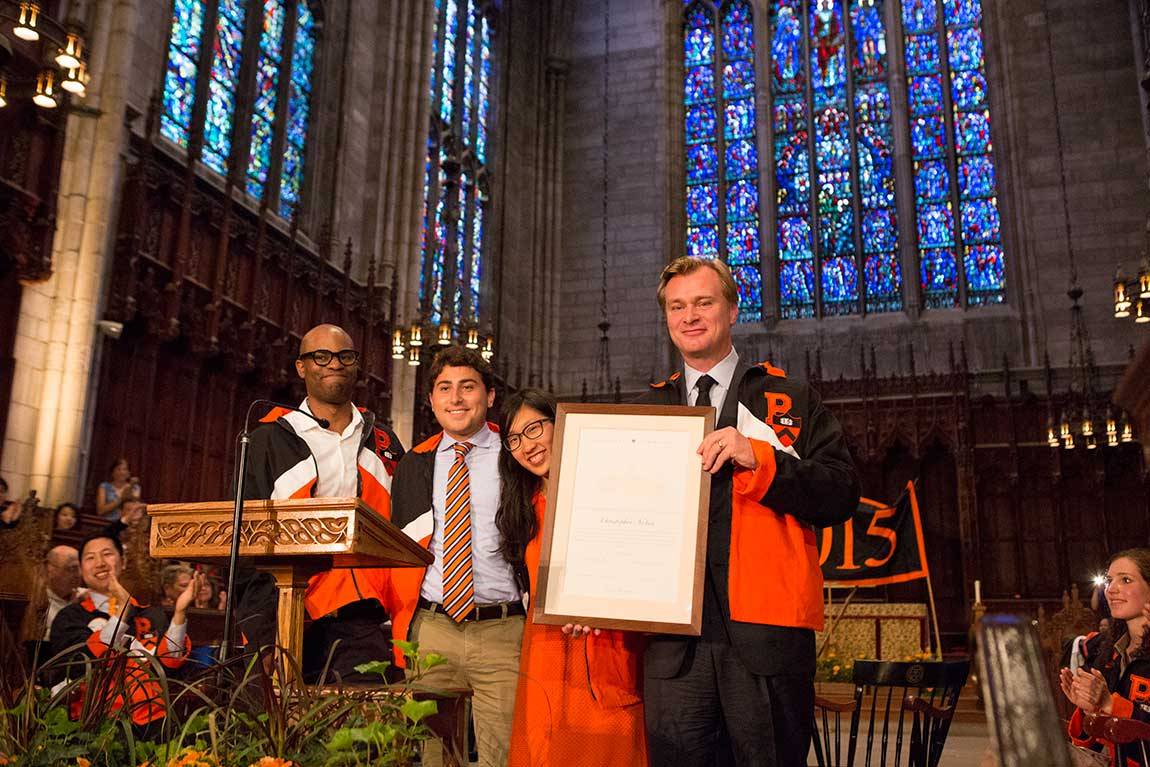 Keynote speaker Nolan is presented a certificate commemorating his induction as an honorary member of the Class of 2015, as he stands next to student Class Day chairs (from left to right) Evan Coles, Adam Tcharni and Hanna Kim. (Photo by Denise Applewhite, Office of Communications) 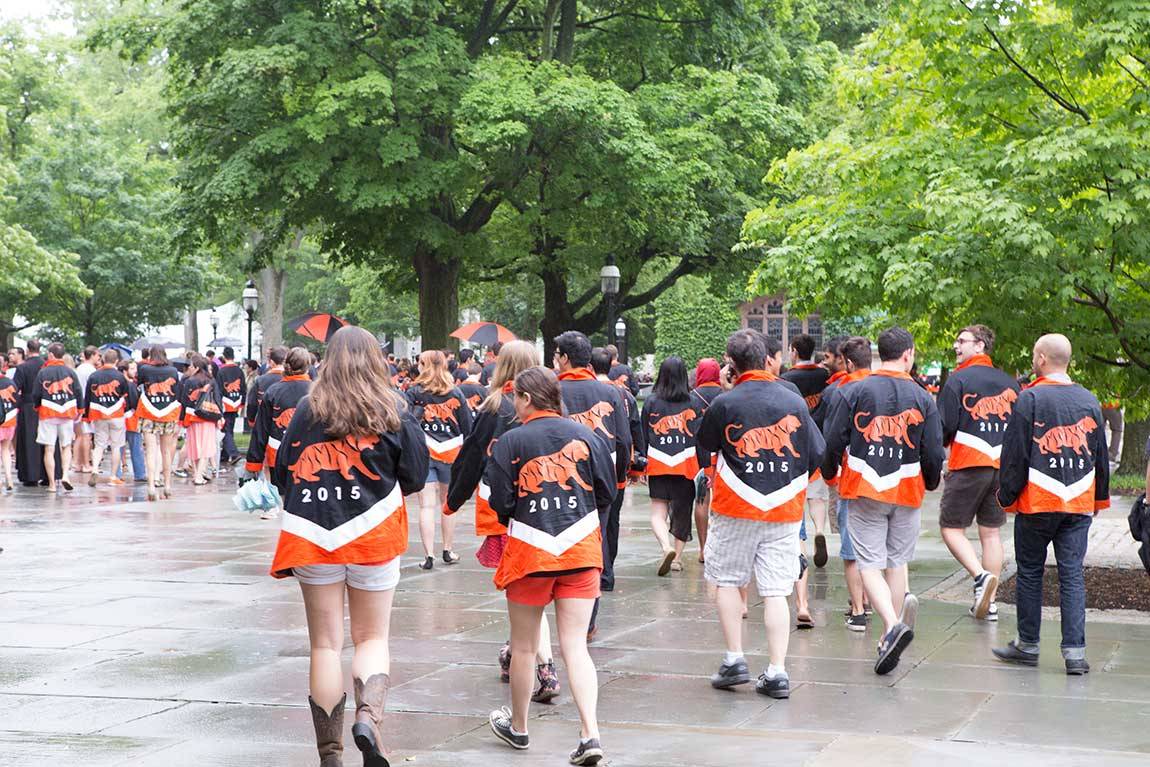 Seniors wearing their class jackets leave the chapel on the rainy morning of Class Day. (Photo by Denise Applewhite, Office of Communications)