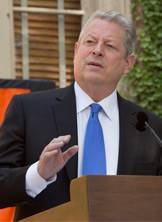 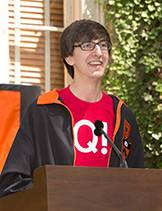 Senior Adam Mastroianni gives a humorous speech filled with references from the past four years that resonated with seniors.

Senior Adam Mastroianni gives a humorous speech filled with references from the past four years that resonated with seniors.

Gore, a well-known advocate for addressing climate change, discussed the challenges facing humanity and the role of the Class of 2014 in resolving them. The past several years have seen the widespread acceptance of humanity's role in climate change, legislative steps to control greenhouse gases, and the popular adoption of renewable energy, he said in the Class Day keynote address. But the "conversation" still needs to be changed, Gore said. As with civil rights, meaningful action against climate change can only be made when much of society agrees that the problem exists and has the will to solve it, he said.

"The will to act is itself a renewable resource," Gore said to the graduating class and their family members seated on Cannon Green. "The ice is melting and the water is rising, and we're still struggling to establish the reality of what is happening. … We have to resist merchants of doubt who are hired to confuse people to the point where they don't know what is the truth." 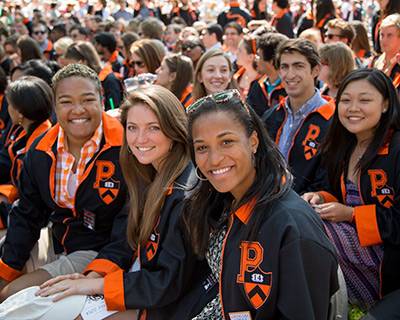 The power of friendships and the bonds between classmates is an enduring theme of Class Day. (Photo by Danielle Alio, Office of Communications)

This isn't the first time that seemingly impossible tasks have fallen to the generation of newly minted college grads, Gore said. He referenced the cynicism many adults directed at President John F. Kennedy's 1961 charge to land a man on the moon before 1970. When the goal was realized in 1969, Gore said, the average age of the mission engineers was 26 — meaning they were 18 when Kennedy broached the idea.

"Young people who take the time to get a quality education and empower themselves with the kind of skills that you have acquired here at Princeton can change the world," Gore said. "The fact that the world has resisted change thus far is of no import."

Gore conjured an image of future generations looking back on those seated before him and, depending on the state of the Earth left to them, asking either how the Class of 2014 could have failed to act, or how they found the "moral courage" to change the planet for the better. If the question comes from that better world, Gore said, "I want part of the answer to be that the Princeton Class of 2014 helped to lead the way." 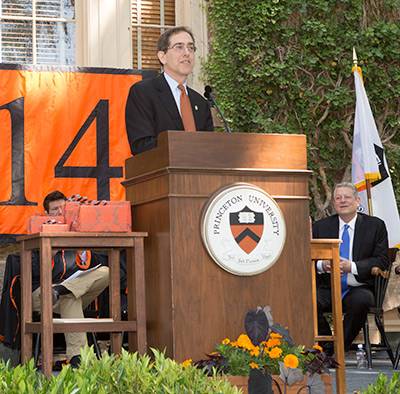 Princeton President Christopher L. Eisgruber, a 1983 alumnus, delivers his first Class Day speech and recalls the history of the event, from the "Dark Ages" of earlier Class Days to the "Renaissance" of recent events. (Photo by Denise Applewhite, Office of Communications)

Preceding Gore, Princeton President Christopher L. Eisgruber, in his first Class Day address, discussed the history of Class Day. From its establishment in 1856 through 1962, the ceremony earned annual notice from The New York Times, he said. The paper would carry word of the event with over-descriptive articles noting the most minute of details, such as that the popular dance in 1914 was the one-step (although 23 seniors considered dancing "morally undesirable").

Class Day presenters-of-yore would unexpectedly summon students to the stage for humorous and sometimes unflattering awards, such as a 1934 graduate deemed the Prettiest in Class and presented with a mirror, Eisgruber said. Like all Princeton students at that time, the recipient was male.

After 1962, Class Day then entered the "Dark Ages" of sober award presentations and sedate speeches by little-noticed speakers, said Eisgruber, who, as a member of Princeton's Class of 1983, placed his Class Day near the nadir of this era. 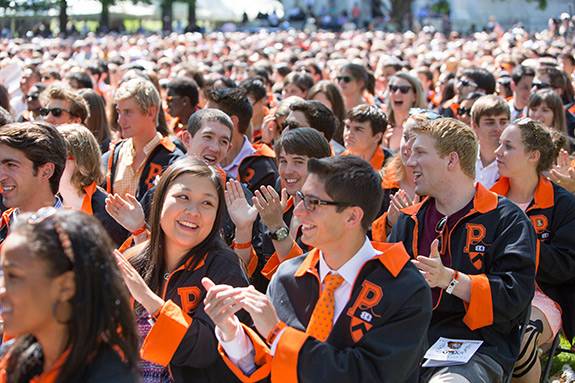 Class Day, organized by seniors, features awards, lighthearted speeches and a keynote speaker selected by the class. The day was established in 1856 to give students the opportunity to celebrate their graduation and accomplishments in a less formal setting. (Photo by John Jameson, Office of Communications)

Beginning in 2001, however, with the appearance of comedian Bill Cosby, each subsequent class has seemingly sought to outshine that before it in terms of speaker celebrity, he said. Recent speakers include comedians Jerry Seinfeld (2003), Jon Stewart (2004) and Steve Carell (2012); former President Bill Clinton (2006); actress and 1987 alumna Brooke Shields (2011); and journalists Charles Gibson of the Class of 1965 (2010) and Katie Couric (2009).

While the Class of 2014 had, by inviting Gore, "raised the bar with someone with a Nobel Prize, an Academy Award and who has held executive office," Eisgruber took it upon himself to capture fully the tradition of Class Day by reviving the giving of unexpected and lighthearted awards. 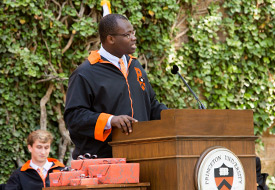 Class president Luchi Mmegwa speaks about the achievement of graduating: "It's amazing to look out and see that we all made it to this day. Four years ago, when we all arrived on campus, we came wary of the challenges ahead … With each passing year, we became better at dealing with the challenges that make the Princeton experience one of the most remarkable and difficult college experiences anywhere in the world." (Photo by John Jameson, Office of Communications)

Eisgruber called to the stage class president Luchi Mmegwa to honor him for his stance in November against burning in effigy a stuffed bulldog to celebrate Princeton's second-consecutive football victories over Harvard and Yale. Eisgruber presented Mmegwa and incoming class president Benedict "Benny" Wagstaff with a large stuffed tiger adorned with a mortarboard, dubbing them "Outstanding Protectors of Stuffed Animals." Eisgruber said he expects the tiger to return to campus during Reunions "intact, well-groomed and looking magnificent, as magnificent as the Class of 2014."

Gore followed up on Eisgruber's admiration of recent Class Day speakers and wondered how he fit in with a roster of actors, television personalities and comedians. Admitting that he was "once named one of the 100 funniest men on C-SPAN," Gore dusted off old jokes from his vice presidency that made light of his sometimes flat-seeming disposition: "Al Gore is so boring his Secret Service codename is Al Gore."

He briefly commiserated about the disheartening effect of grade deflation, when an A can become a B, saying, "Heck, I won the popular vote and got marked down to second place." Following that reference to his controversial loss in the 2000 presidential race, he said, "You win some, you lose some and then there's that little-known third category." 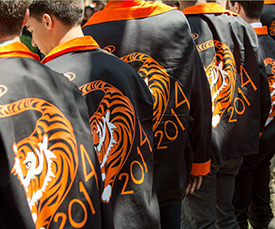 Members of the Class of 2014 sport their uniquely designed senior jackets, which they will wear when they return to campus as alumni for events such as Reunions. (Photo by John Jameson, Office of Communications)

Seniors Adam Mastroianni and David Drew talked about the camaraderie and perseverance gained from their unforgettable time at Princeton.

"When we applied to Princeton, we said we were passionate about learning, that we wanted to change the world and that we deserved to be here," Mastroianni said. "And when Princeton admitted us, it didn't just say yes, it said prove it. And then through every challenge, it taught us that we can't prove it."

In a speech in which he referenced long papers, tough classes and an unshakeable virginity, Mastroianni said, "I hope Princeton humbled us enough to know that we can't measure our lives in achievements alone."

Drew said that the privilege of Princeton has been the people and experiences. "It's been a privilege to be around passionate people, even if I don't know who first inspired who, or how to trace how one person's actions affect another's," he said. "I'm confident though that as we head out into the world we'll spread what Princeton gave us far and wide, across the nation and across the globe."

Seniors were presented with awards for community service, athletics and leadership. The class also named its honorary class members.

A webcast of the Class Day ceremony is available online. Graduation activities continue with the University's 267th Commencement ceremony at 11 a.m. Tuesday, June 3, on the lawn in front of Nassau Hall. 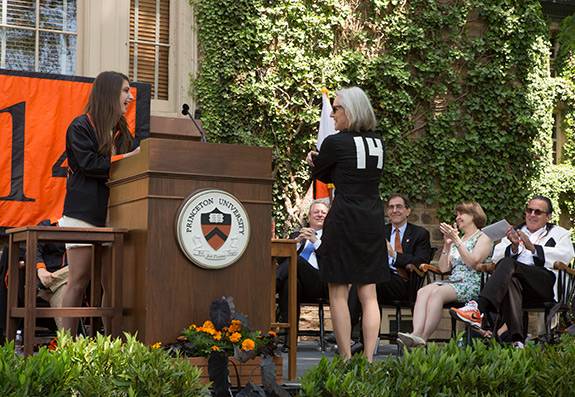 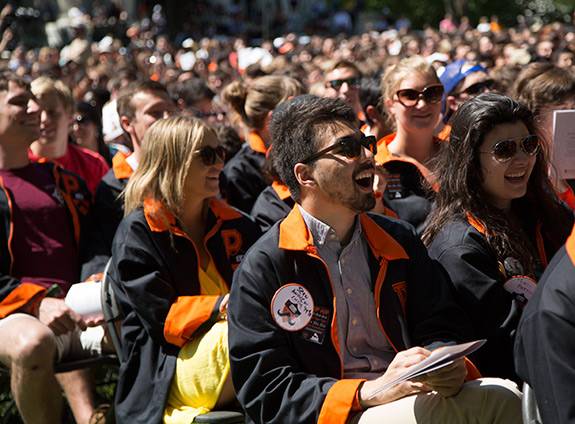 On a sunny morning surrounded by classmates and family, seniors bask in the moment as they enjoy Class Day. (Photo by Danielle Alio, Office of Communications) 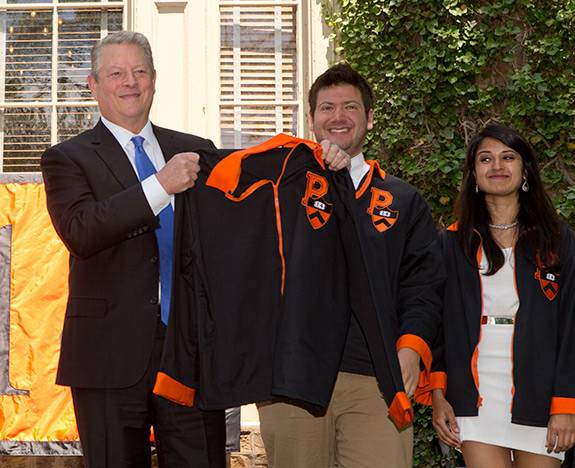 After his speech, Gore accepts a class jacket as a new honorary member of the Class of 2014, flanked by seniors (from left) Teddy Schleifer and Alisa Tiwari. (Photo by Denise Applewhite, Office of Communications) 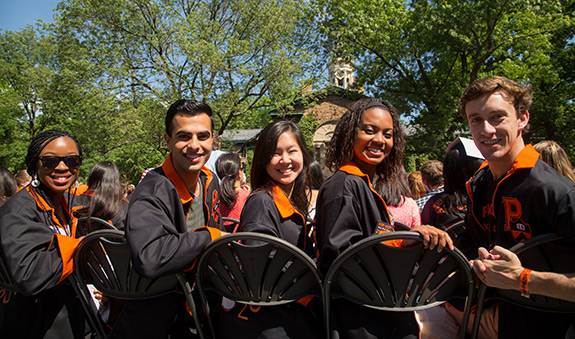 Class Day gives seniors the chance to look back before looking ahead to Commencement the next day and to their futures as Princeton alumni. (Photo by John Jameson, Office of Communications)