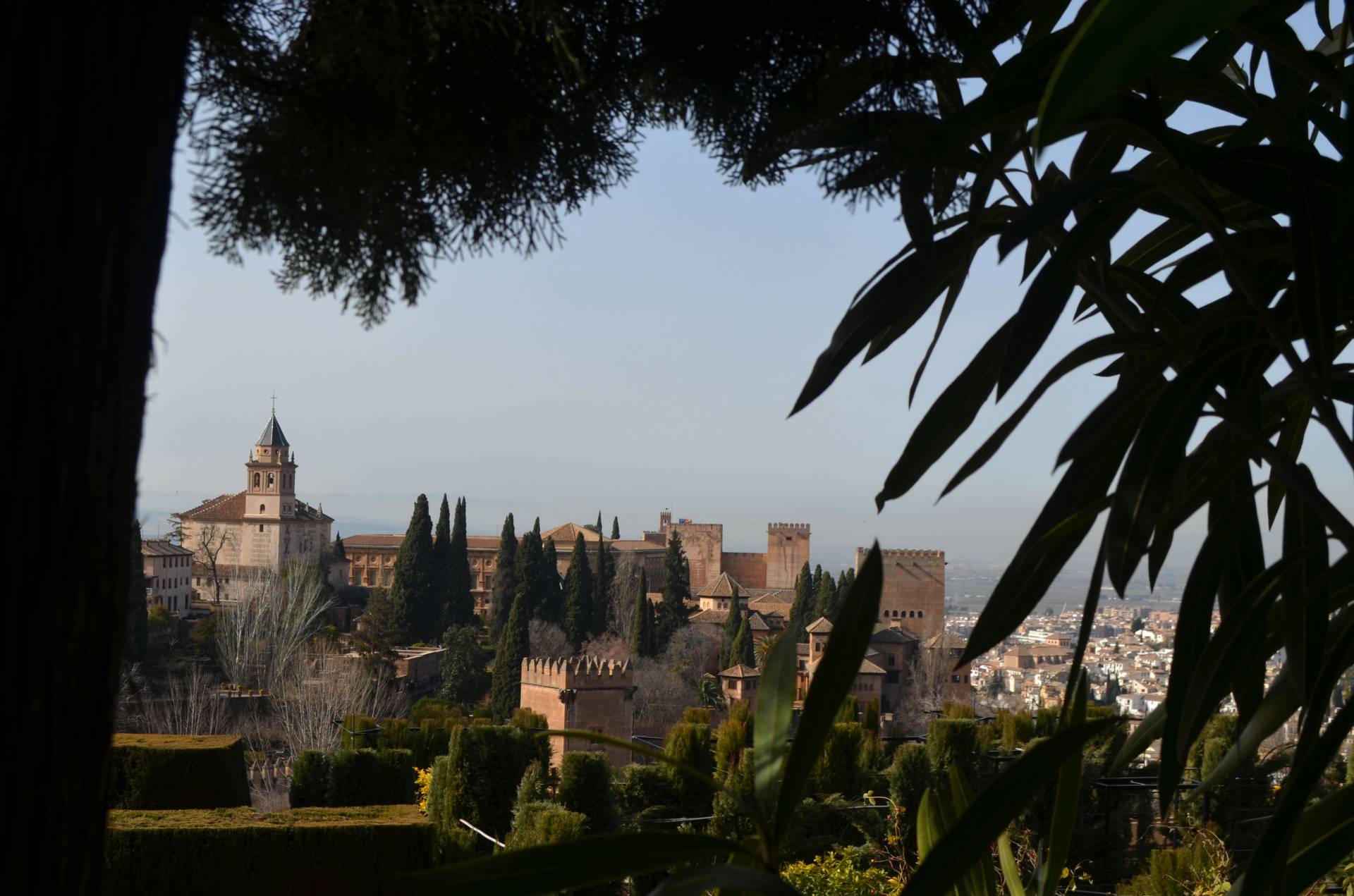 We spent the morning running through the famous Alhambra palace [Granada, Spain] in order to keep up with our no-nonsense guide, Robert. While the group charged ahead, I’m glad I decided to stop for a split-second to take this photo, through a natural opening created by a few overhanging branches. You can see the palace almost in its entirety, populated by a number of Cyprus trees — not pine trees, as is commonly assumed.

Caption and photo by Jordan Salama

This intersession, Princeton juniors concentrating in Spanish and Portuguese took a week-long trip to Spain and Portugal. A capstone to the junior seminar "Spanish and Portuguese-Speaking Worlds," the trip is designed to give students a hands-on opportunity to explore the history, language and culture they will continue studying in the classroom. The trip took place between the end of the fall semester and the start of the spring semester.

With photos, Legnani, Lee and their students captured the experience. 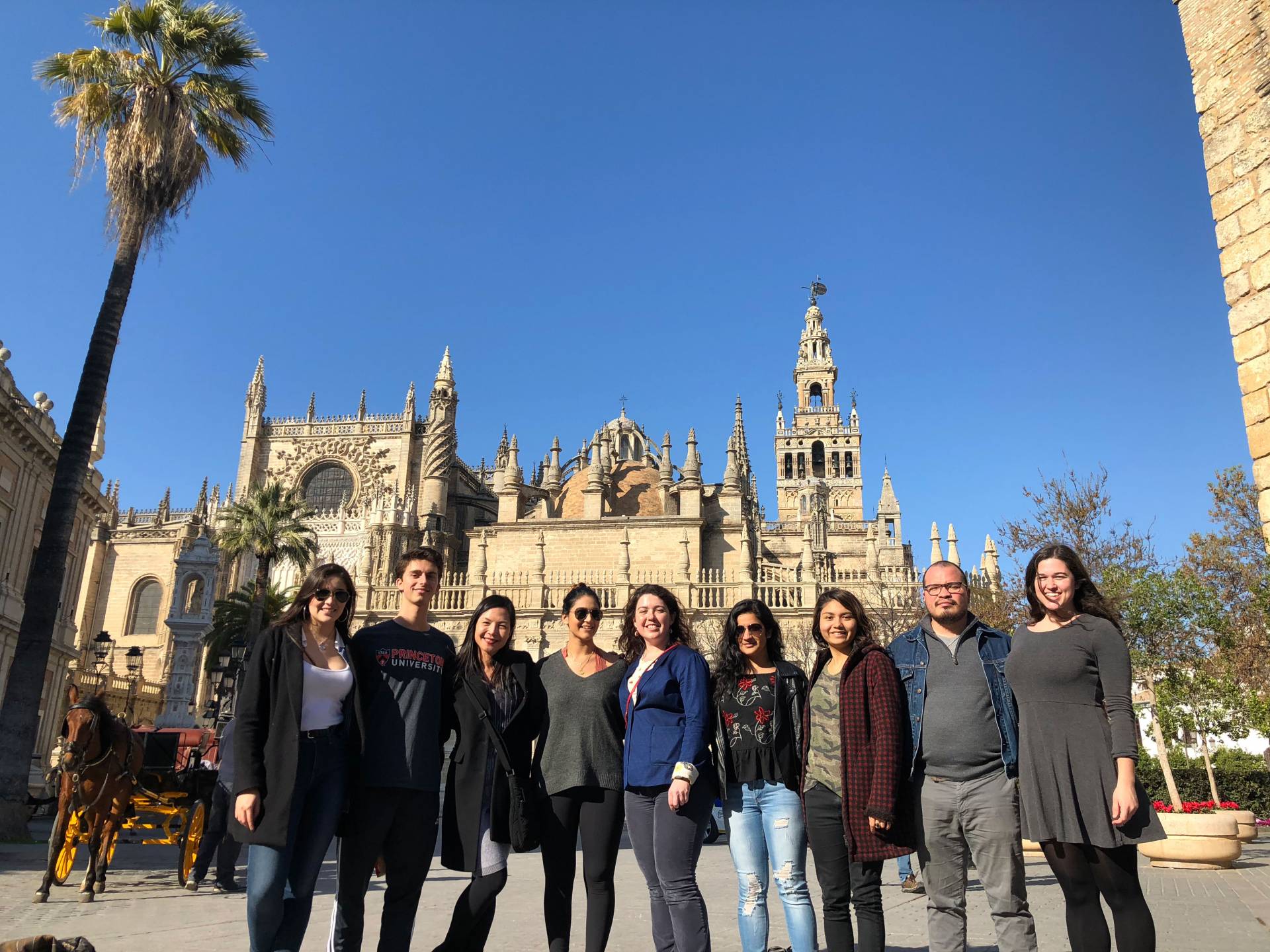 After a delicious meal of paella, we made our way to a few popular monuments in Seville [Spain]. In this photo, we are standing in front of the Seville Cathedral and the Giralda tower. The group enjoyed walking around the cathedral, absorbing years of history. In addition to holding the title of the largest Gothic church in the world, the Seville Cathedral is also home to the tomb of Christopher Columbus. Even though it was quite a climb to the top of the tower, the breathtaking view of the city was definitely worth it. From left to right: Melissa De Queredo, Jordan Salama, Christina Lee, Mira Gill, Nicole Legnani, Chitra Kumar, Alejandra Rincón, Tlaloc Ayala and Kathryn Phipps.

Caption and photo by Mira Gill 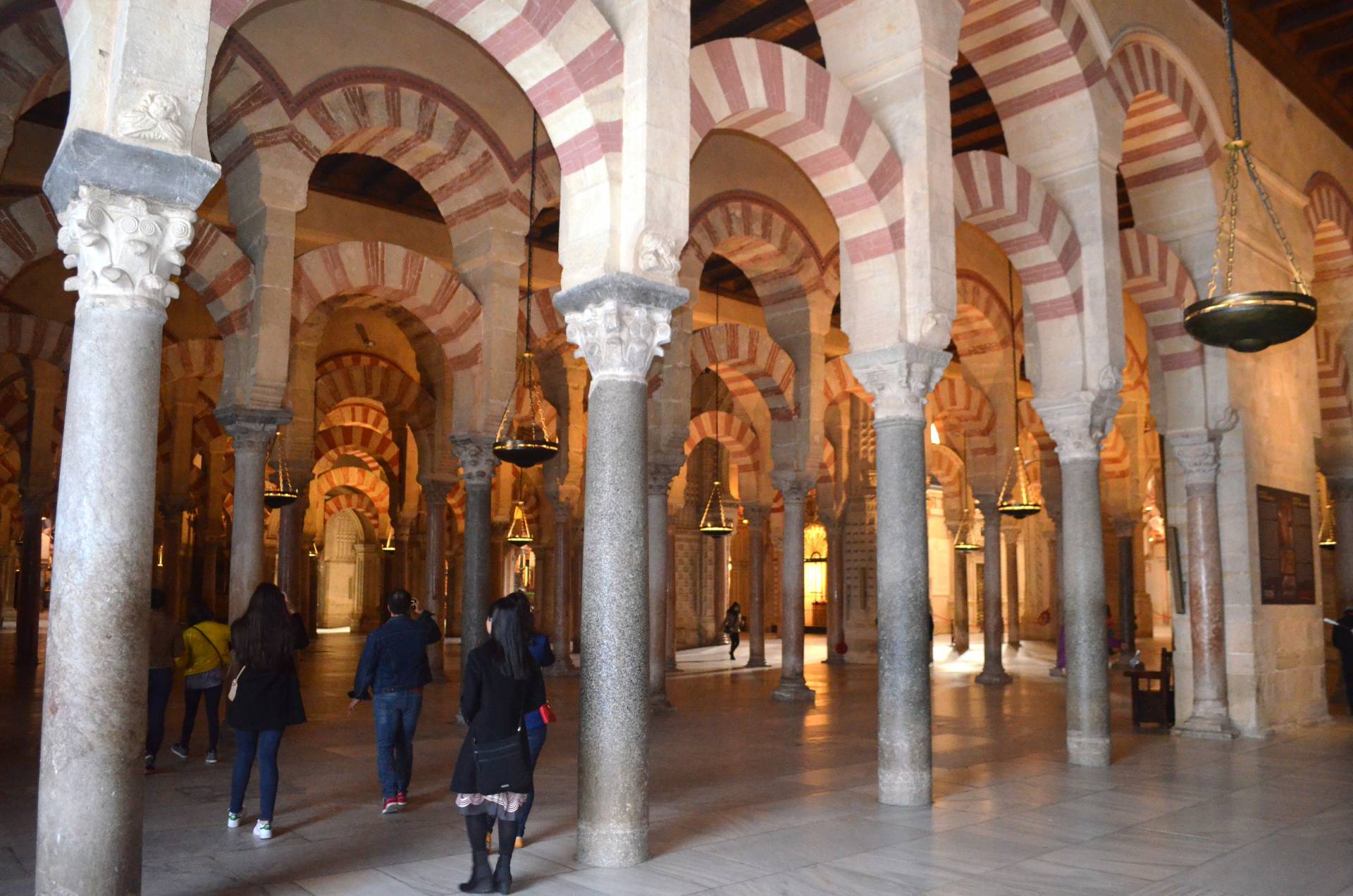 To walk through the Great Mosque-Cathedral of Córdoba [Spain] is to walk through the past, with the artifacts of religious conflict plainly visible in its very structure. It was a pretty shocking experience to wander across centuries as we observed different parts of the mosque. In particular, we noted how the insertion of the cathedral within the structure of the mosque was such a strong demonstration of cultural and religious conquest. It definitely felt problematic to our modern understanding of religious tolerance, but as our tour guide pointed out, the decision to reuse and to build on top of a conquered city, instead of destroying the previous buildings, preserved both parts of the original mosque, as well as the history of conquest. 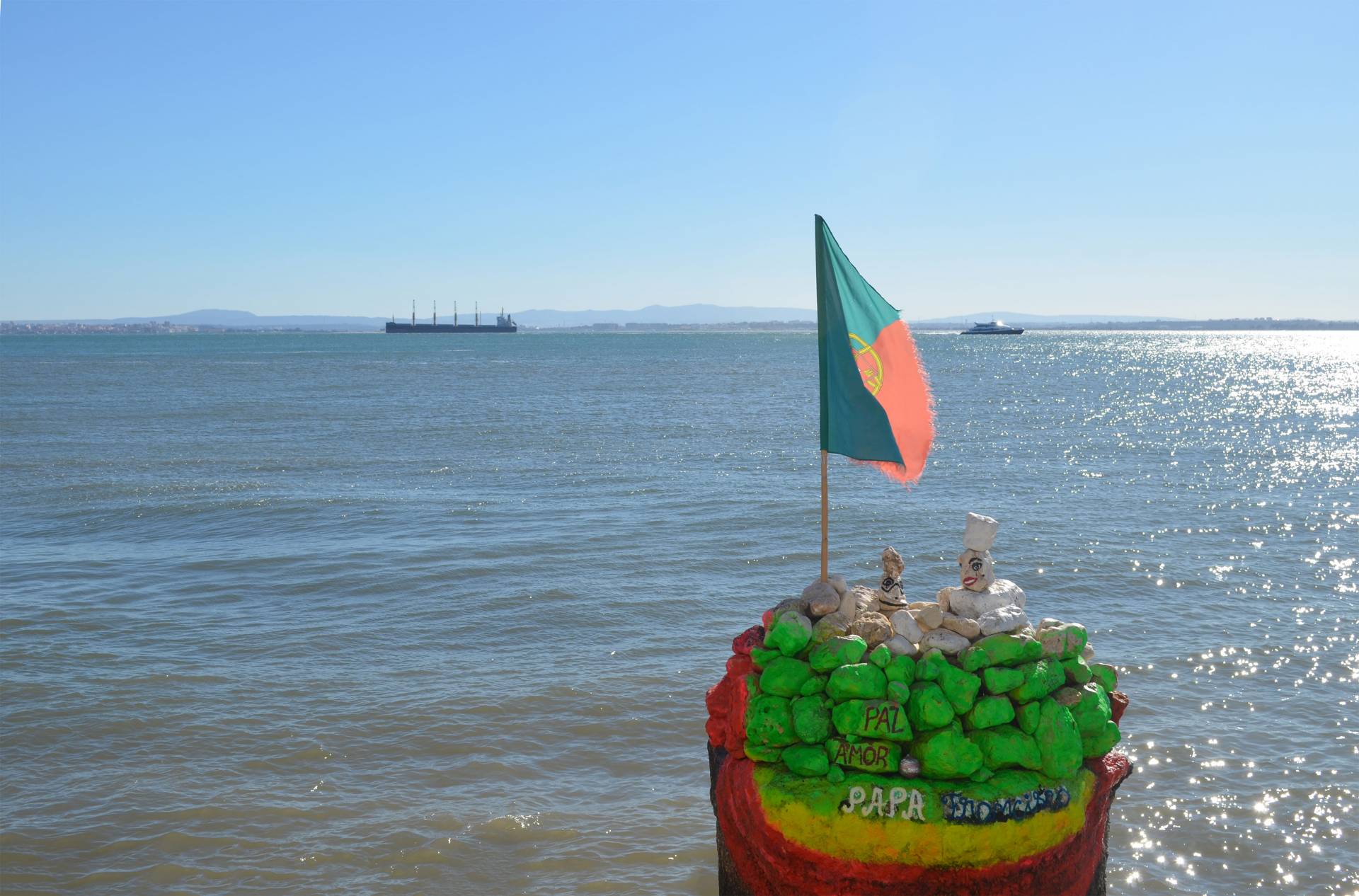 We took a walk along the rocky shoreline of the Tagus River in Lisbon. Across the way, far in the distance, you can see the town of Casilhas. But in the foreground, just offshore, is a stone column propping up the Portugal flag. Over the years, people have begun balancing rocks atop the column, and others have painted them in Portugal’s national colors. Written on this rock are the words “paz", or "peace”; “amor,” or “love”; and “Papa Francisco,” a reference to Pope Francis. It's a powerful, communal reminder of the strength of the Portuguese national identity.

Caption and photo by Jordan Salama 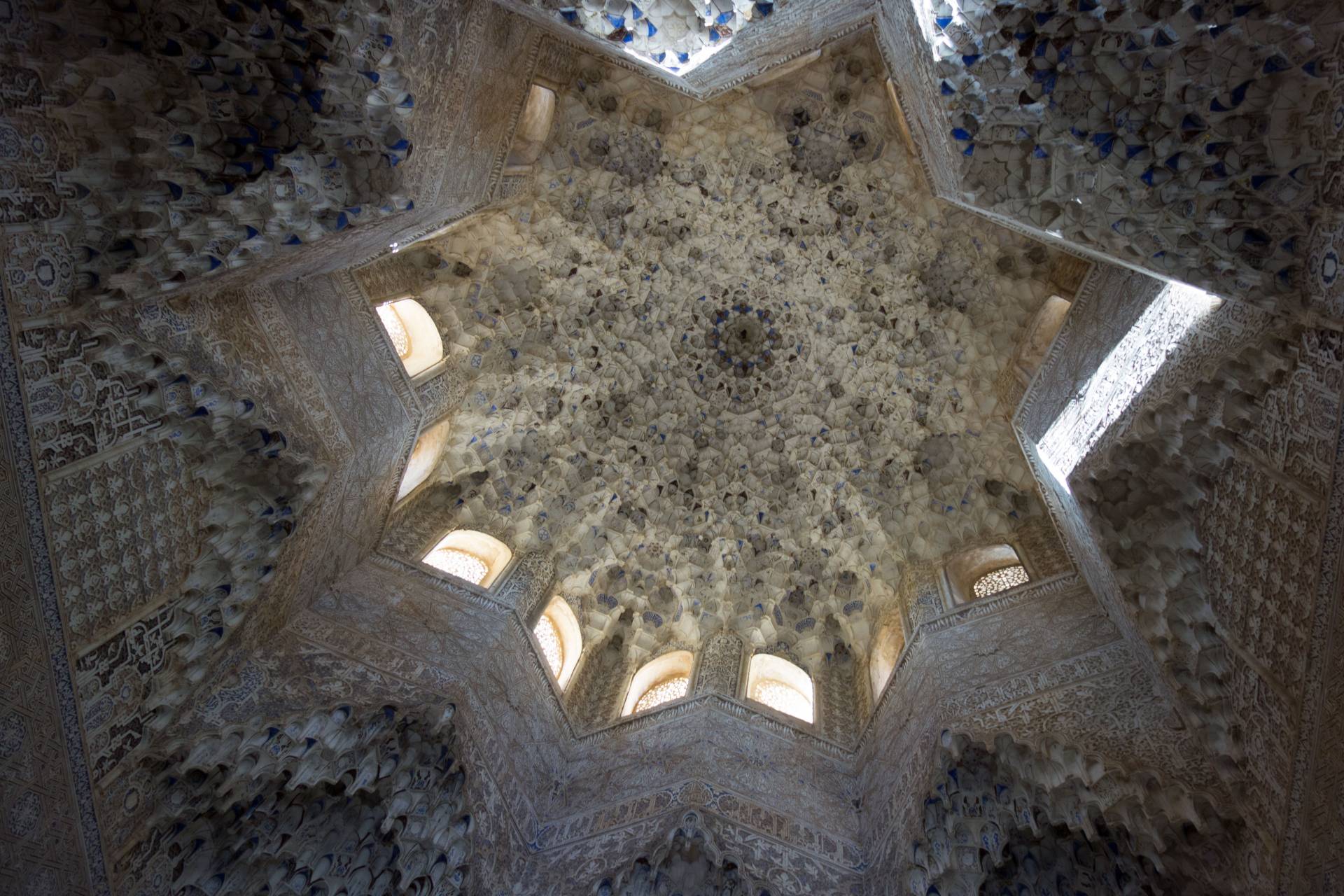 It's hard to imagine something more breathtaking than the intricacies of this architecture, with the ceiling mimicking the stalactites of a cave. Yet throughout the Alhambra, you have to use your imagination to bring these rooms to life by mentally layering color, decorations and furniture to picture their original splendor. Still, with only the remnants of the bright blues, reds and yellows that once covered this ceiling, the sight was magnificent enough to produce an uncharacteristic silence in our group as we each gazed upwards, lost in our own musings and imaginations.