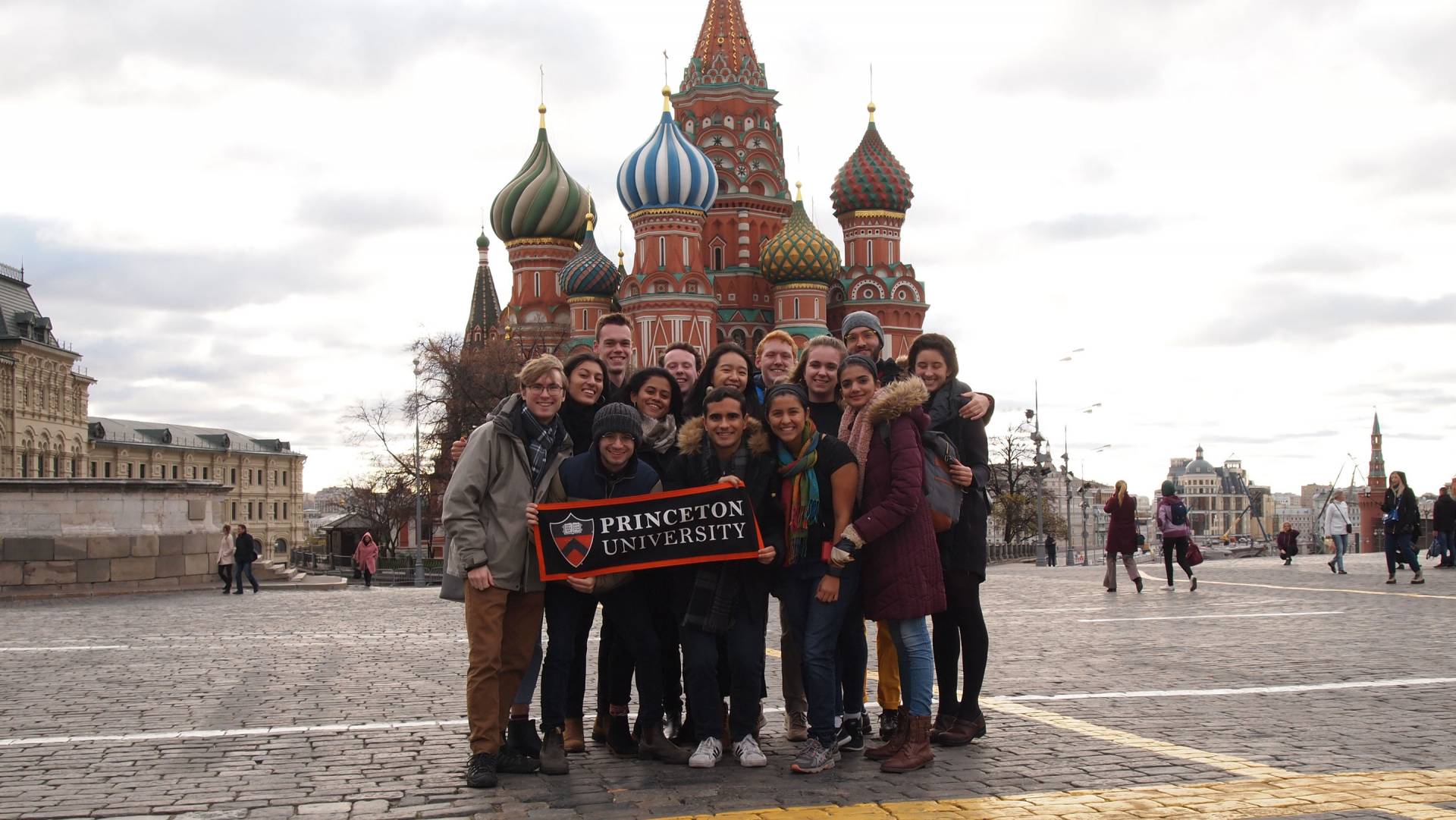 Students in the fall urban studies research seminar delved into historical accounts, literary works, art and film that captured the communities and landmarks of two cities — New York and Moscow. During fall break, the class traveled to Moscow. Pictured: The group visits Red Square, with the famous landmark of St. Basil's Cathedral, now a museum, in the background.

Each fall, an urban studies research seminar, offered to juniors and seniors, dives into research methods in the field. This fall, 15 Princeton students delved into historical accounts, literary works, art and film that capture the communities and landmarks of two cities — New York and Moscow. Armed with this knowledge, the students visited both cities to experience firsthand the similarities and differences in the cultural, political and social worlds of the people who live there.

Through topics ranging from public housing to places of worship, students considered urban development issues past and present.

“There are moments when Moscow and New York are in direct conversation,” said Aaron Shkuda, program manager of the Princeton Mellon Initiative in Architecture, Urbanism and the Humanities, and a lecturer in architecture. “In the 1900s, the Lower East Side was defined by Russian immigration; Moscow’s 1930s ‘Seven Sister’ high-rises were designed to be the antithesis of a New York skyscraper; the United Nations headquarters [completed in 1952], was built with one eye towards Moscow, and both cities saw the construction of modernist public housing after World War II.”

He added: “We are in another moment of convergence, as international real estate capital flows through both cities, and the New York-based architectural firm Diller Scofidio + Renfro [partner Elizabeth Diller is a professor of architecture at Princeton] designs iconic public spaces in both cities: the High Line in New York and Zaryadye Park in Moscow.”

Early in the semester, students took a self-guided walking tour of New York; over fall break, the class traveled to Moscow. “We wanted students to observe how people use public space and to think about what elements of urban life were consistent across both cities, and where local history, culture and built forms create divergent experiences,” Shkuda said.

Katherine Reischl, assistant professor of Slavic languages and literatures, who co-taught the course with Shkuda, said the city becomes its own kind of teacher on these visits, allowing students “to reflect on [their] own cultural assumptions with a new perspective.”

She added: “It is one thing to read about the rules of using the Moscow Metro; it is another thing entirely to be part of the enormous crowd at rush hour, taking part in the ballet of movement that operates under its own sense of order — all the while admiring, or having trouble admiring in the jostle — the incredible underground palaces of that unique metro.”

Regardless of the students’ academic focus, Shkuda hopes they will take away from the course the ability “to read cities like a text — to peel back their layers and analyze how elements like medieval walls, grand boulevards built during the 19th century, Soviet-era urban planning, and modern gentrification all shape the built environment … and how people live, work and play in cities.”

The course is part of the Humanities Council's Magic Project, a program that encourages global and engaged innovation in the humanities. The Humanities Council supports interdisciplinary team teaching and develops a wide array of "breakthrough" seminars, each offering experiential or fieldwork components and moving outside the traditional classroom setting. The course is also part of the Exploration Seminars, a new initiative of the Princeton Institute for International and Regional Studies (PIIRS) and the Office of International Programs in offering semester-long courses that incorporate a faculty-led international travel component, often during fall or spring break.

The students captured the Moscow experience on the course's Instagram account, with an Admission Office blog post by junior Roberto Hasbun, and through photos, with selections shown below: 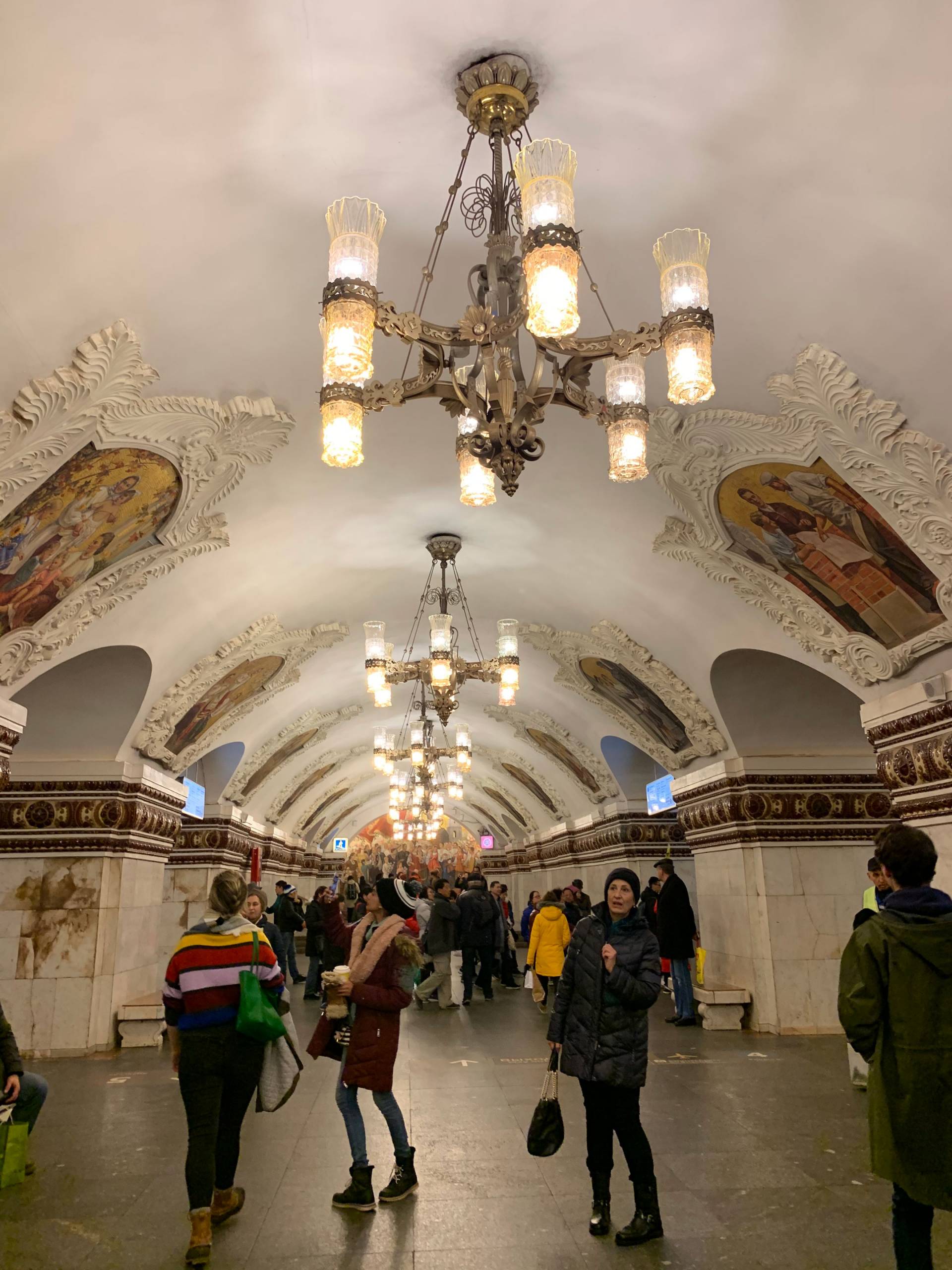 For a moment, I forgot I had a Metro train to catch as I wandered through Kievskaya Station’s palatial extravagance, examining the murals that depict not monarchs or aristocrats but ordinary Soviet people picking fruit and raising families. It was overwhelmingly clear that this was an underground palace, one built by and made for the people. As I relented and joined the flow of people moving towards the platform, I reflected on the personal connection Muscovites have with their Metro stations and how this contributes towards their upkeep, efficiency and orderliness. 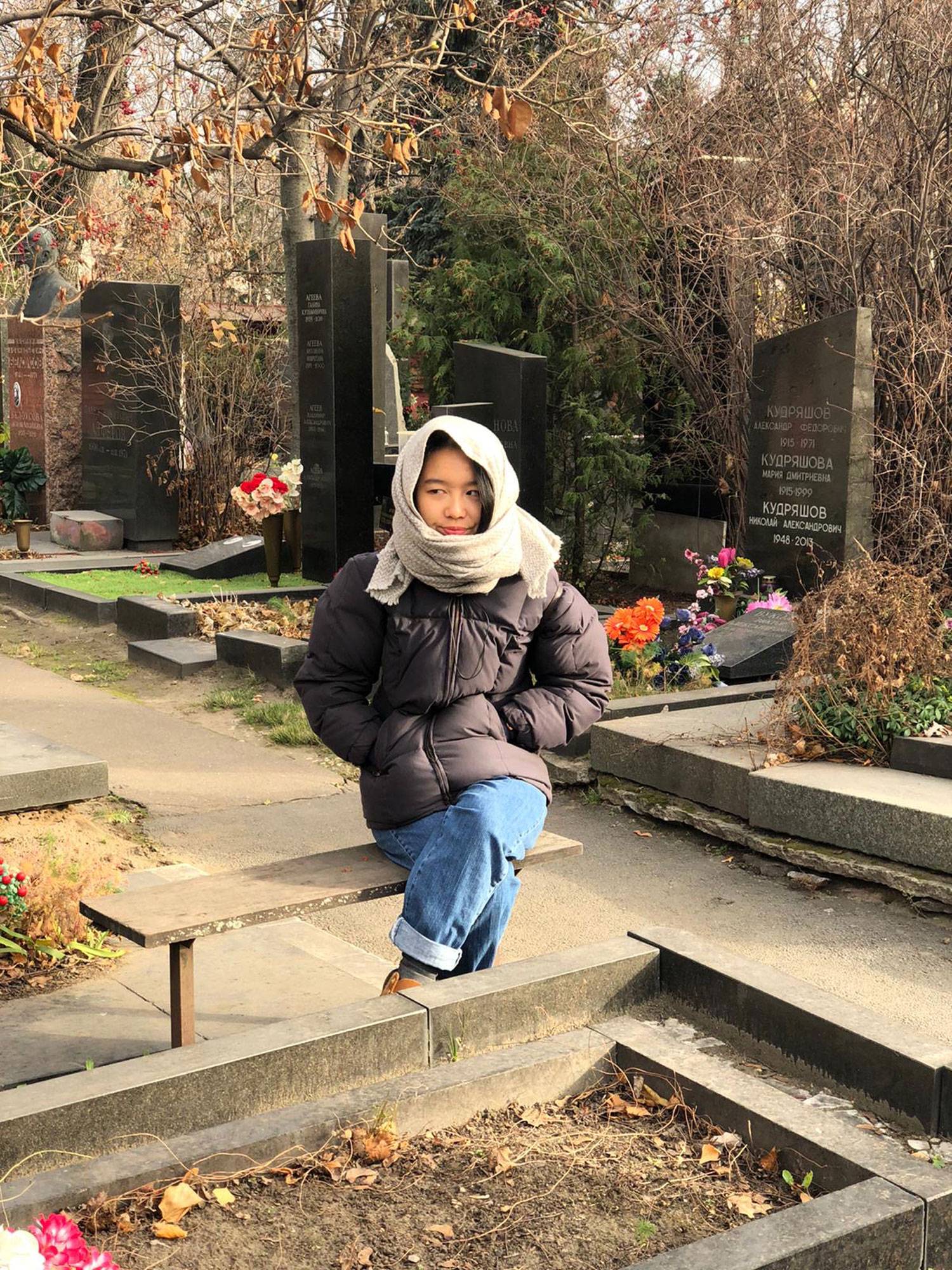 While the Kremlin Wall Necropolis is where the most high-profile Soviet leaders are buried, I sit here at the Novodevichy Cemetery, which holds its own prestige as the burial place for Russian elites. Here, a prolific array of portrait busts, chapel crosses and abstract sculptures immortalize political leaders such as Khrushchev to writers like Gogol. It is an eerie thought that a person's story does not vanish with death and is instead tabulated and lives on to be acquainted with visitors from the future — with or without flowers. 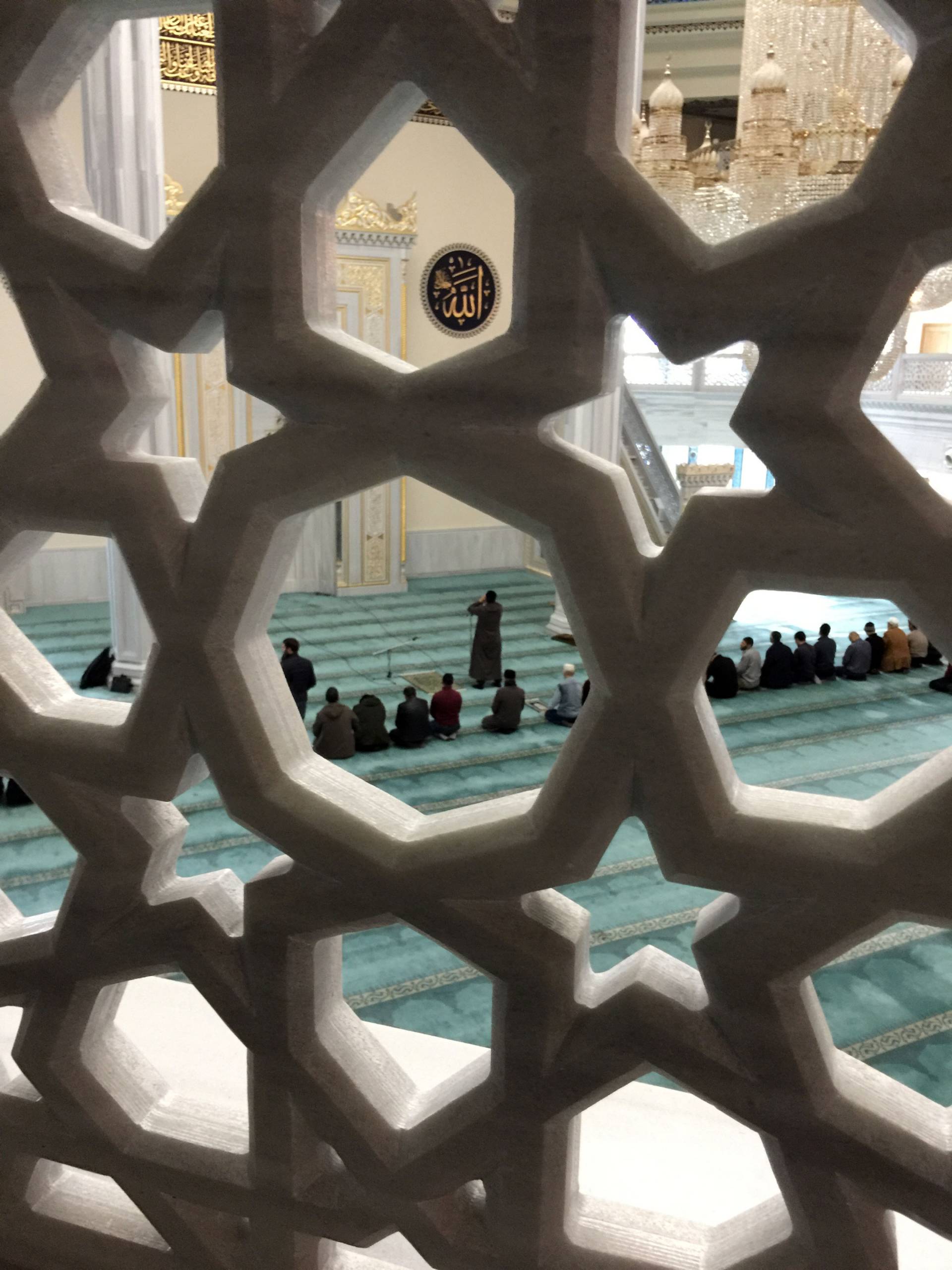 A group of Muscovites gathers for prayer in the Moscow Cathedral Mosque, the city’s largest mosque. Originally built in 1904 as the “Tatar Mosque,” the structure was replaced in 2015 to accommodate the city’s increasing Muslim population. Touring this mosque provided a glimpse into the lives and histories of one of the city’s largest minority groups. But, more surprisingly for me, we learned how the building operates as a symbol of Russia’s alliances with certain Muslim countries. 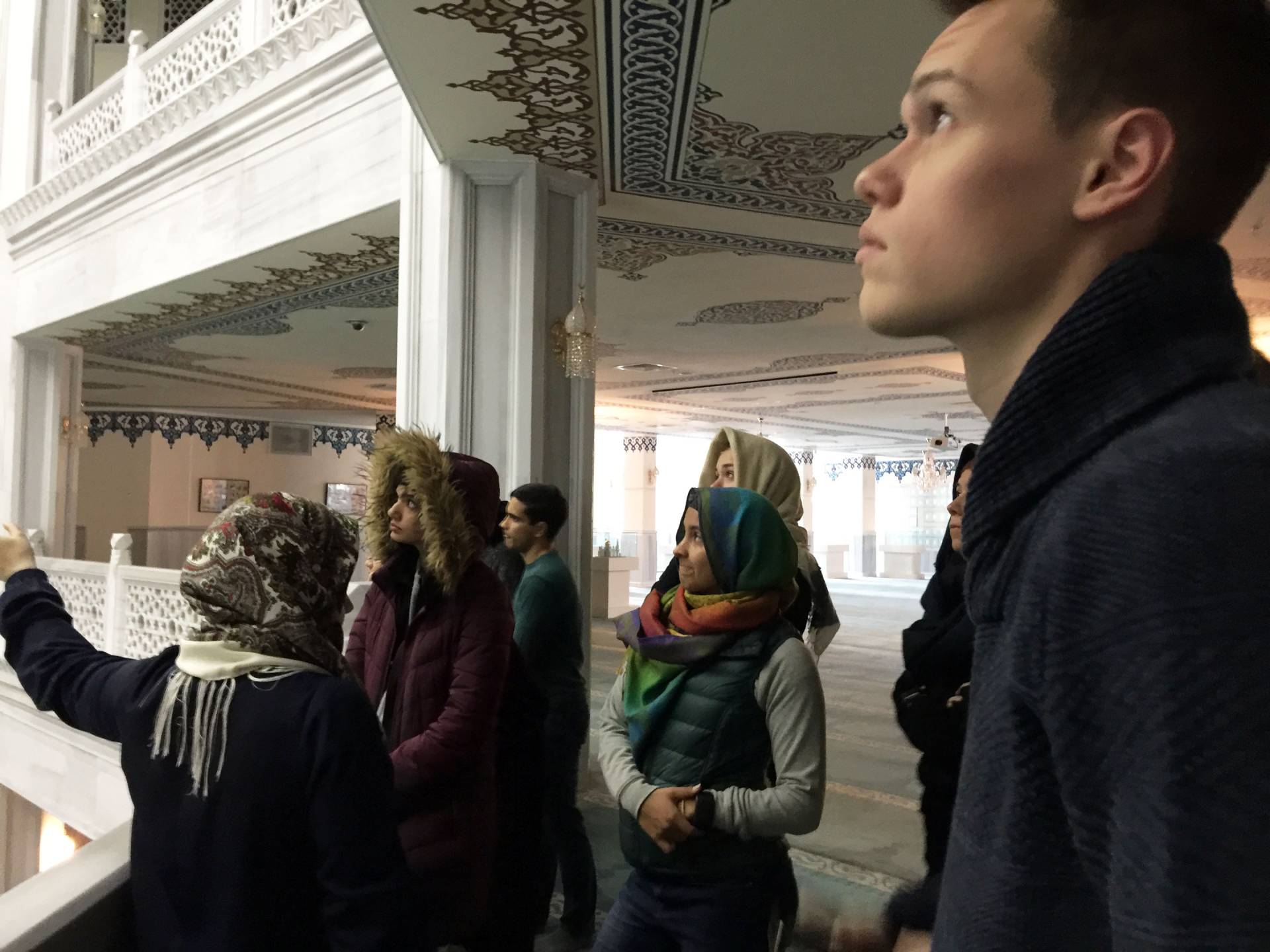 Our tour guide at the Moscow Cathedral Mosque explained various scripts that were calligraphed around the main prayer room. For example, inside the dome of the mosque, “surah shams” is written in the shape of the sun — the word “shams” translates to “sun” in Arabic. As a Muslim, visiting this mosque was one of the most peaceful, overwhelming and ethereal experiences I’ve ever had. Beyond the visual greatness, the mosque has a rich history. I was amazed that the mosque survived Stalin’s period anti-religion campaigns when believers were persecuted.

The Sleeping District lies outside the heart of Moscow and the Khrushchevki dot its skyline: The Khrushchevki are apartments built in the post-Stalin era in a mad scramble to move families out of communal living and into individual units. Whether looking at how the state dictates what “home” looks like (in Khrushchevki) or how to commemorate a life at the grave (in Novodevichy Cemetery), my time in Moscow inspired me to change my senior thesis topic after observing the innumerable ways a communist country penetrates the most intimate aspects of personal life. 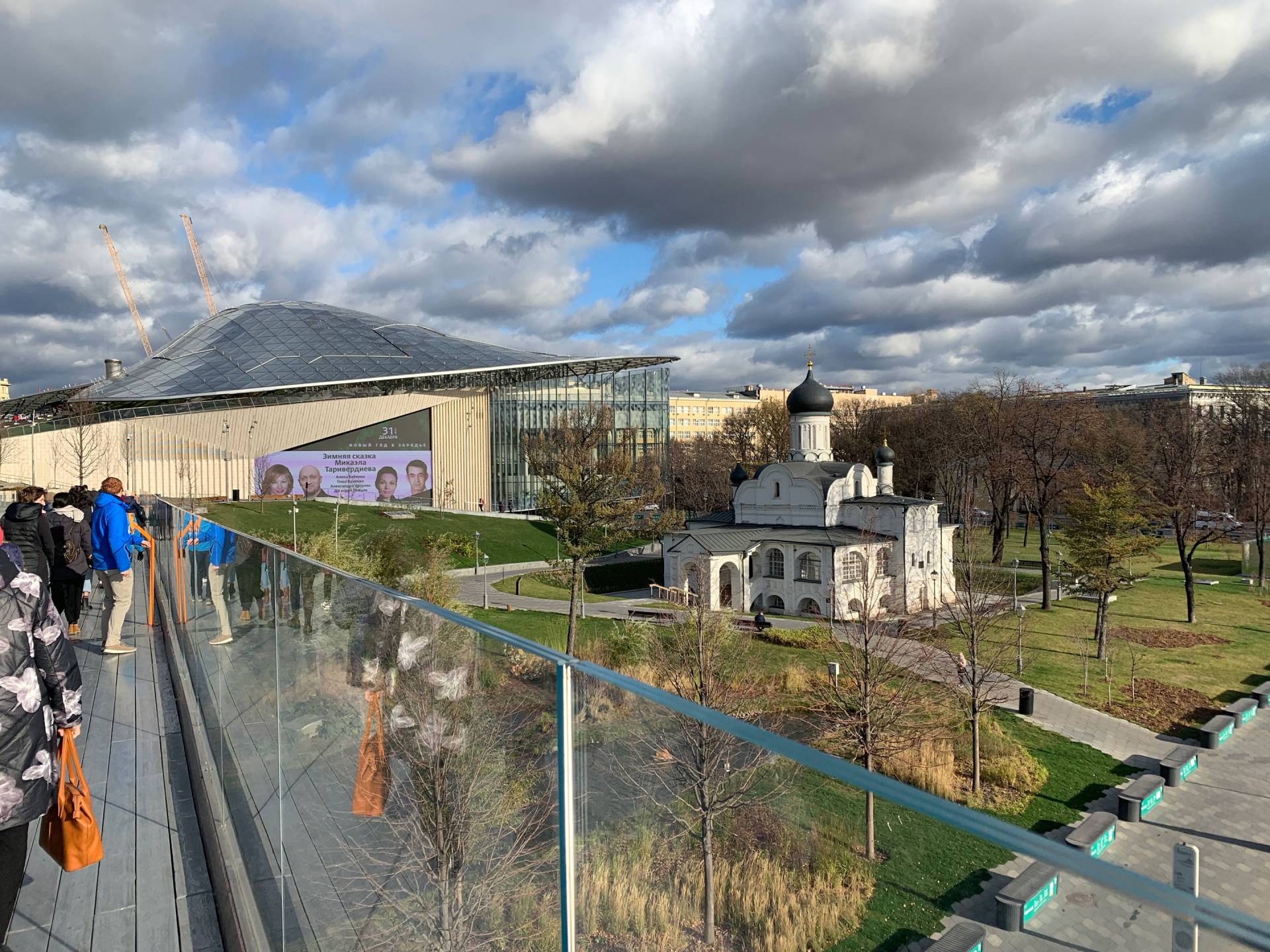 Despite being designed by American architects, Zaryadye Park is no less Russian than St. Basil’s Cathedral and Red Square, which lie just across the road. Opened in 2017, the park is home to both ancient Russian architecture, as well as modern glass and steel construction, cleverly blended into the landscaping of the park’s winding slopes. It’s hard not to get lost in the park’s birch forest, or in the meadow reminiscent of Russia’s vast steppe; it’s easy, however, to forget that you’re in Moscow’s very heart.

Caption and photo by Jack Allen, Class of 2021, Slavic languages and literatures 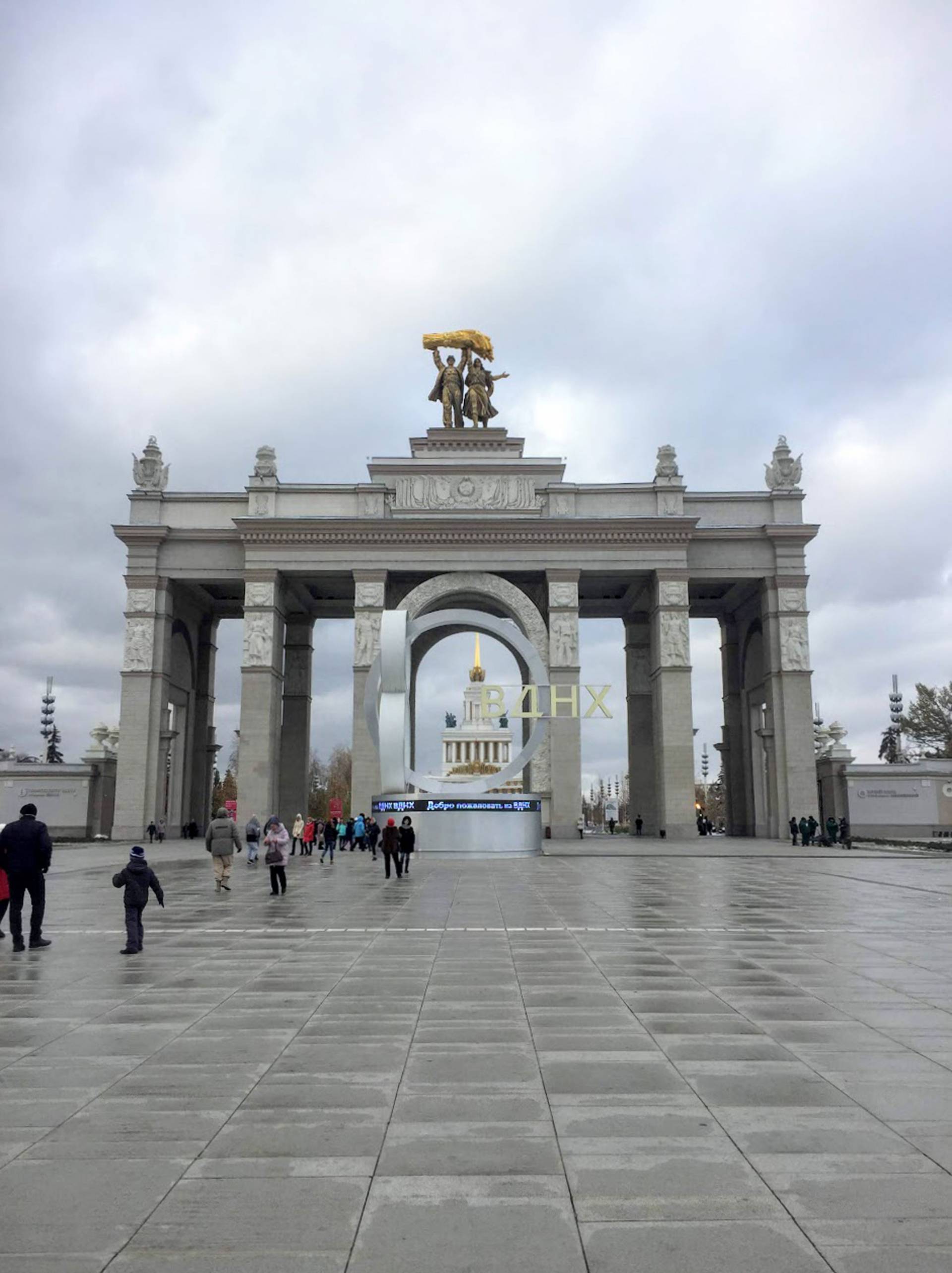 VDNKh, the entrance of which is pictured here, is a series of pavilions built in the 1930s that showcased the technological advancements and cultural highlights of the USSR. Nowadays, VDNKh (which stands for Exhibition of Achievements of the National Economy) is a tourist hub, serving as a memorial to the Soviet era. Walking through VDNKh, its overwhelming grandeur, embodied by its massive structures, impressed me the most. The size of the space was overpowering. Through their physicality, the buildings argued for the greatness of the USSR. 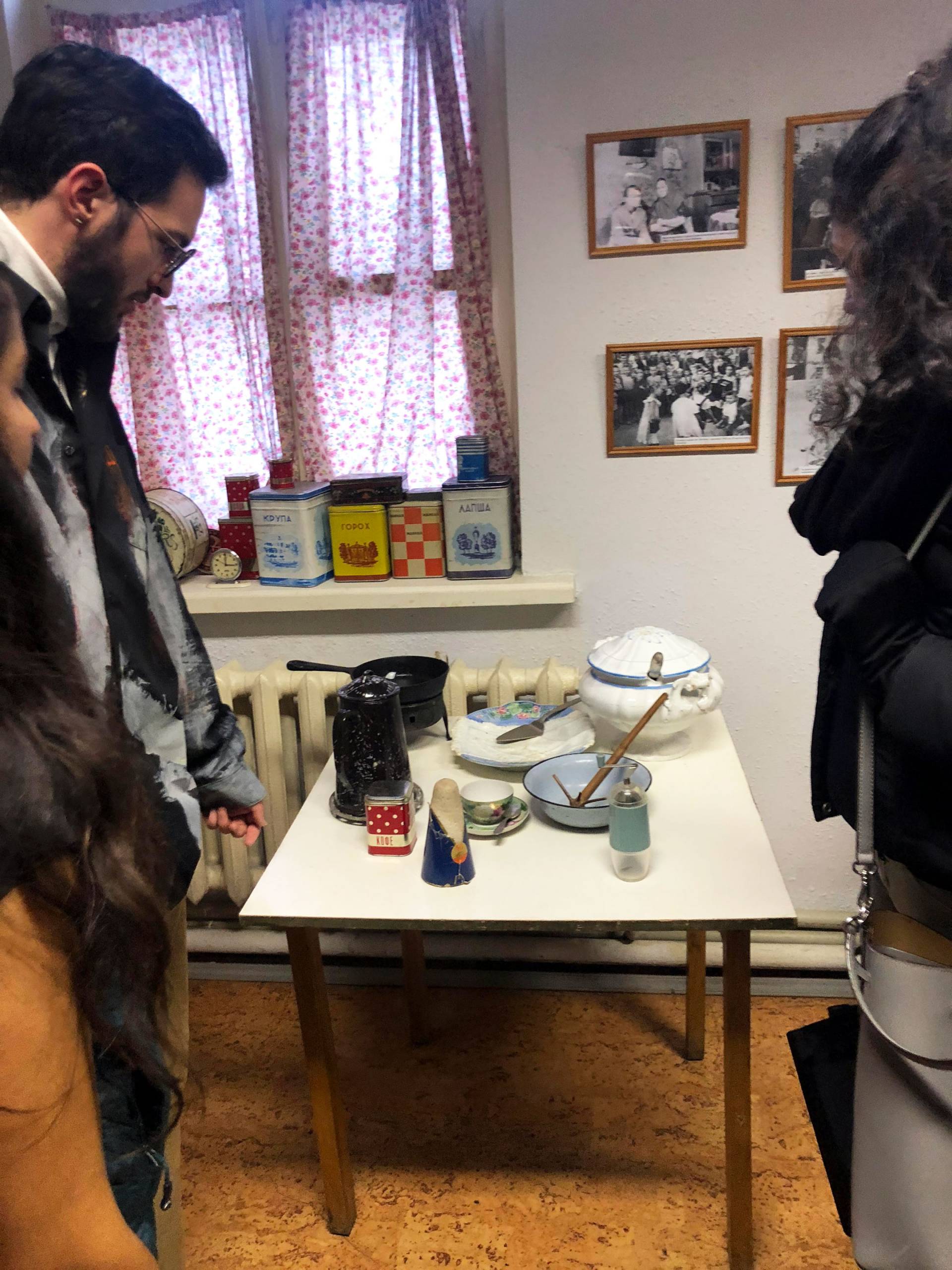 This photo was taken at the Kommunalka (communal apartment) Museum, located in a former Romanov estate that was converted to housing for Soviet citizens after the Bolshevik Revolution. The space is recreated with everyday objects, such as the kitchen table here. Dozens of families would share the same kitchen! It was incredible seeing the creative ways Soviet citizens made the most of their situation, and seeing how ideology shaped people’s living conditions.