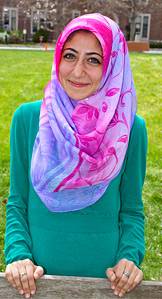 Rund Abdelfatah, a Princeton senior concentrating in anthropology, focused her thesis on her journey through southern Spain as a covered Muslim woman. The journey gave her new insights to the complex identity of the region and pushed her to re-examine the way she thinks about her own identity as an American, a Palestinian, a Muslim and a woman.

A journey to explore the complex identity of southern Spain gave Princeton senior Rund Abdelfatah new insights into an overwhelmingly Catholic region that has an uneasy relationship with its Muslim past.

But the trip through the region known as Andalucía also pushed her to re-examine the way she thinks about her own identity as an American, a Palestinian, a Muslim and a woman.

Abdelfatah — an anthropology major who was born in Saudi Arabia and grew up in Kinnelon, N.J., with parents who are Palestinian refugees — used the lessons she learned about Andalucía and herself to craft her senior thesis, an ethnography titled "The Veiled Phantoms of Andalucía: A Journey Through Time, Space and Memory Toward Demystifying Identity." 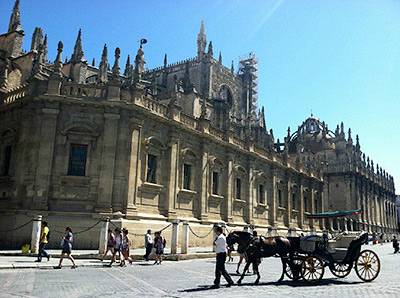 Abdelfatah traveled throughout southern Spain during her thesis research, visiting historic cities well known for their architecture and culture. In Seville, she spent time at the city's cathedral, the largest Gothic cathedral in Europe. It stands on the site of a former mosque. (Photo courtesy of Rund Abdelfatah)

"Going into it, I knew that I wanted to look at how space and history and identity all come into contact with each other, but I thought it was going to be much more about the people I was meeting and the places I was seeing — not so much about my place in that," said Abdelfatah, who is also pursuing a certificate in Spanish. "I'm not the kind of person who really likes to insert myself into my writing. But I realized that's part of the story. At least it's part of my story."

Anthropology professor Abdellah Hammoudi, Abdelfatah's adviser on her thesis, said her work reflects both her academic abilities and her personality.

"Rund clings to her identity as choice and freedom," Hammoudi said. "She puts high value on the constituents of that identity. Yet she maintains a high degree of critical and empirical rigor in her work."

Falling in love with Spain

Abdelfatah said she fell in love with Spanish as a middle school student and pursued study of the language through high school and college. She was drawn to Spanish culture, too. "I've always had this dormant desire to go to Spain because it's kind of the root of the language," she said. "I like to trace things to their source because I think along the way you learn a lot of things."

For three months in the summer of 2012, Abdelfatah worked for a small English-language newspaper in Ronda, a town of about 35,000 perched on a cliff about 20 miles from the Mediterranean Sea. Whenever she could, she explored Ronda and other cities in the region, from Seville to Marbella.

Ruled by Muslims for centuries before their final expulsion in 1492, Andalucía bears signs of both Catholic and Muslim influence — and evidence of tension as Muslims have begun to return to the region in recent decades, explained Abdelfatah. 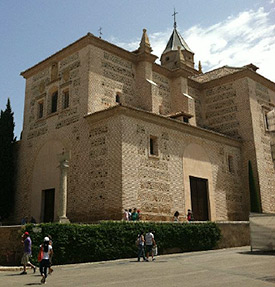 This structure is a small part of the Alhambra, a massive fortress complex in Granada that Abdelfatah describes in her thesis as "the magnet that draws people to Granada — a shining example of architectural precision and splendor." (Photo courtesy of Rund Abdelfatah)

In the city of Cordoba, Abdelfatah found Roman ruins from the second century B.C., medieval Arab baths and dozens of Catholic churches: "Layer upon layer of cultures, peoples and times woven into the same fabric, though hardly seamless. Certainly, the history they tell is neither easy to follow nor intact," Abdelfatah wrote in her thesis. "These layers are like the strata of the earth beneath our feet, pushing against one another with intense pressure, triggering rifts, muffled tremors and even the occasional earthquake."

Abdelfatah said those layers of history collide at Cordoba's Great Mosque/Cathedral, which began life as a mosque built on the ruins of an earlier Roman temple. Invading Christian forces expelled the city's Muslims in 1236 and moved to eliminate any trace of the city's Islamic legacy — including by turning the mosque into a cathedral. So while its Muslim-influenced architecture largely remains, Christian symbols are everywhere.

"Despite all the Christian embellishments, however, the space still clearly looks like a mosque," Abdelfatah wrote. "It reflects a bizarre intersection of perspectives that, in a way, captures the crisis of identity that Spain has grappled with in the past and continues to face today." 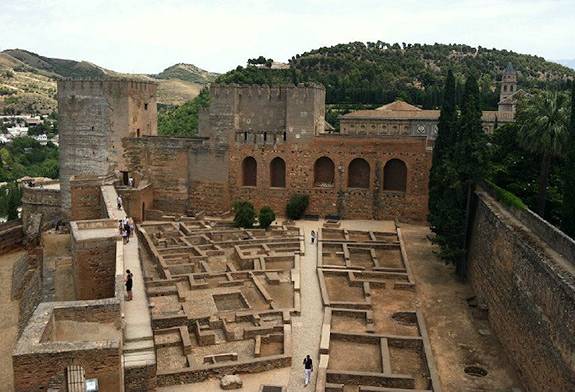 The Alcazaba is the oldest section of the Alhambra in Granada. The Alcazaba dates to the 13th century. (Photo courtesy of Rund Abdelfatah)

At the Great Mosque/Cathedral, Abdelfatah's personal journey intersected with the region's struggle with its identity. Abdelfatah was touring the building with her parents when her mother felt moved to pray. Kneeling discreetly on Abdelfatah's backpack in a corner, her mother — like Abdelfatah, wearing a Muslim head covering known as a hijab — quickly drew the attention of a security guard. He confronted the family, repeatedly shouting: "This is disgraceful! This is a church!" 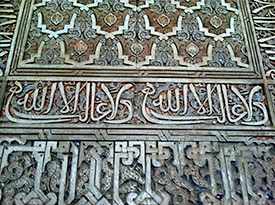 Intricate calligraphy adorns the walls of the Nasrid Plaza, which Abdelfatah describes as "probably the most iconic section of the Alhambra." (Photo courtesy of Rund Abdelfatah)

Only later did Abdelfatah learn that it is against the law for non-Christians to pray there. While the confrontation was unusual during Abdelfatah's journey through Andalucía as a covered Muslim woman, she frequently attracted attention and questions about her religion.

"It's very easy for people to put me in that box," she said. "I think many times in Spain when people addressed me it was because they were interested in my Muslim identity. Most people wouldn't guess I was Palestinian. No one guessed I was American. Definitely the Muslim identity took a front and center role. Partly that's what inspired my thesis because that's pushed to the front of my identity and pushed to the back of the Spanish identity."

Sohaib Sultan, coordinator for Muslim life at Princeton, said he has seen Abdelfatah defy all stereotypes during her four years at the University, where she has been active in the Muslim Students Association, taken tae kwon do, given Orange Key tours and been part of the Princeton Committee for Palestine. She also founded the campus chapter of the Palestine Children's Relief Fund.

"She is a practicing Muslim who observes modest dress," Sultan said. "She is athletic and can take anyone down with her martial arts skills, and she's a scholar in the making. It's a marvelous combination that makes her a joy to be around."

Her thesis is now behind her, but Abdelfatah said questions about her own identity linger.

"I think I'm finding that I'm not as easy to define as I had thought," she said. "I say I'm Palestinian, I'm Muslim, I'm American. But I'm also a woman and a Princeton woman. There are so many facets." 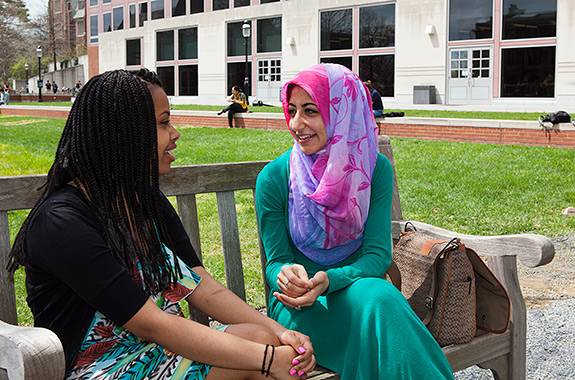 Abdelfatah, right, chats with a friend, senior Miriam Araya, outside the Frist Campus Center. During her four years at Princeton, Abdelfatah has been active in the Muslim Students Association, taken tae kwon do, given Orange Key tours and been part of the Princeton Committee for Palestine. (Photo by Denise Applewhite)