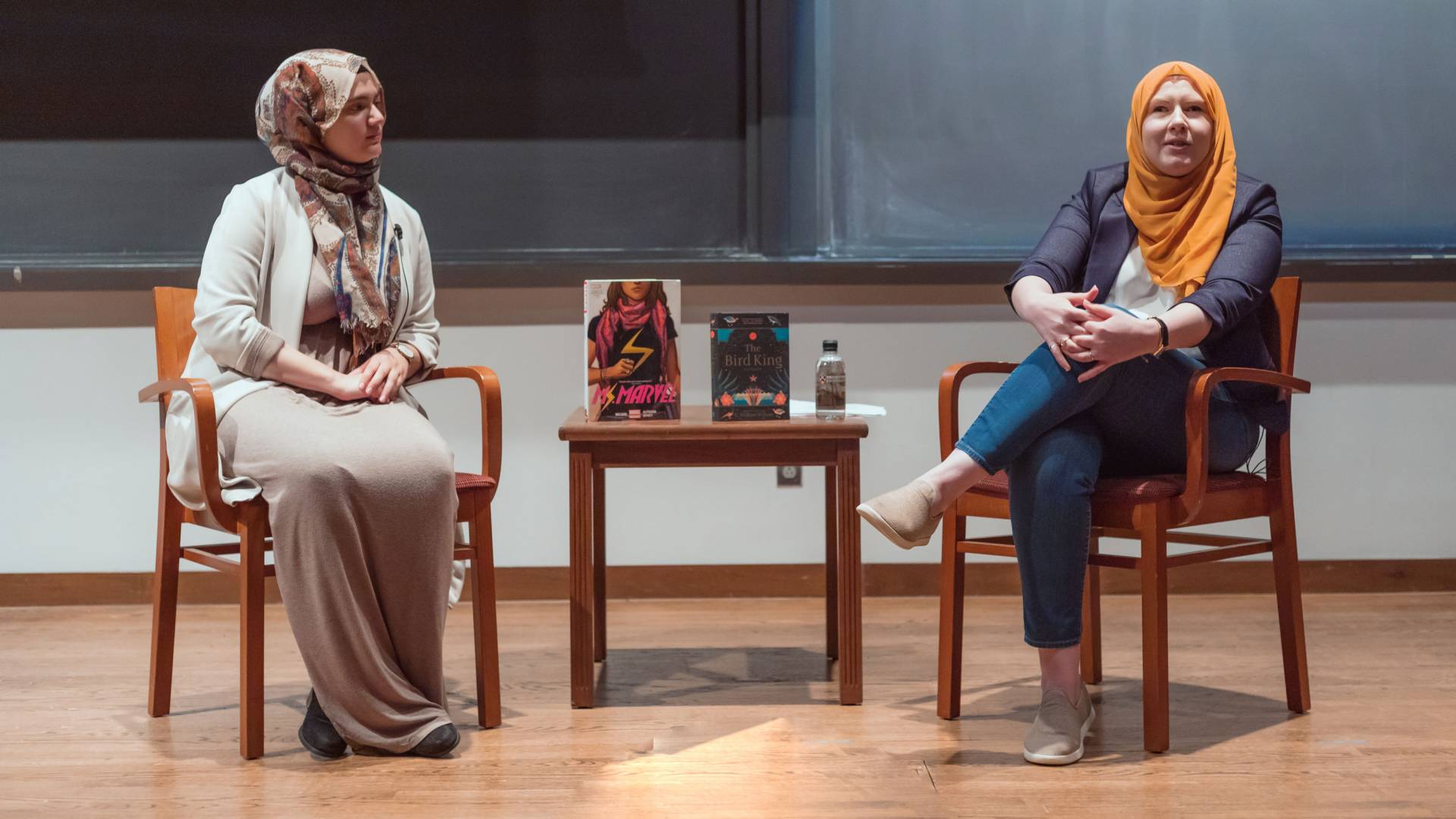 Sena Cebeci, Class of 2019 (left), talks with writer G. Willow Wilson (right) during an April 17 event at McCormick 101. Wilson charted her creative pursuits and described how they relate to her life.

G. Willow Wilson, an award-winning novelist and comics writer, came to Princeton on April 17 to talk about faith and the power of storytelling. Her visit was part of the Muslim Life Program’s Islam in Conversation Lecture Series, which is in its 11th year.

The series invites prominent artists, activists and scholars to discuss Islam and its place in the modern world with attention to the lived experience of intersecting identities. The event brought together many campus partners, including the Lewis Center for the Arts, Campus Conversations on Identities, Princeton University Public Lectures, and the Carl Fields Center for Cultural Understanding and Equality.

Wilson, an American convert to Islam, lives in Egypt and the United States. She spoke about her cross-cultural experiences and the body of her work in a conversation with Sena Cebeci, a senior majoring in politics who is also pursuing a certificate in creative writing.

The conversation opened up by describing the context of Wilson’s early writing career. When Wilson converted to Islam at age 19, she thought that the dominant conversation appeared to portray Islam and the arts in opposition. When Wilson published her memoir, “The Butterfly Mosque” (2010), in her mid-20s, she described this time as lonely, receiving push back from both Western and traditional Muslim circles.

Referencing our moment today, Wilson said, “In the last 10 years, the younger generation has totally broken down those barriers and radically altered that conversation for the better.”

She reassured the audience in McCormick Hall, Room 101: “We are having a mini-renaissance of Western Muslim art and it just feels so wonderful. Things are so much better today, which is ironic given the political situation is so much worse.”

For the future, Wilson hopes that young Muslim artists continue to thrive so it becomes an established norm that there are Muslim voices in the arts.

“What should artists exploding [in]to that space reach out to, in terms of tradition, to feel connected as they are creating?” asked Sena. 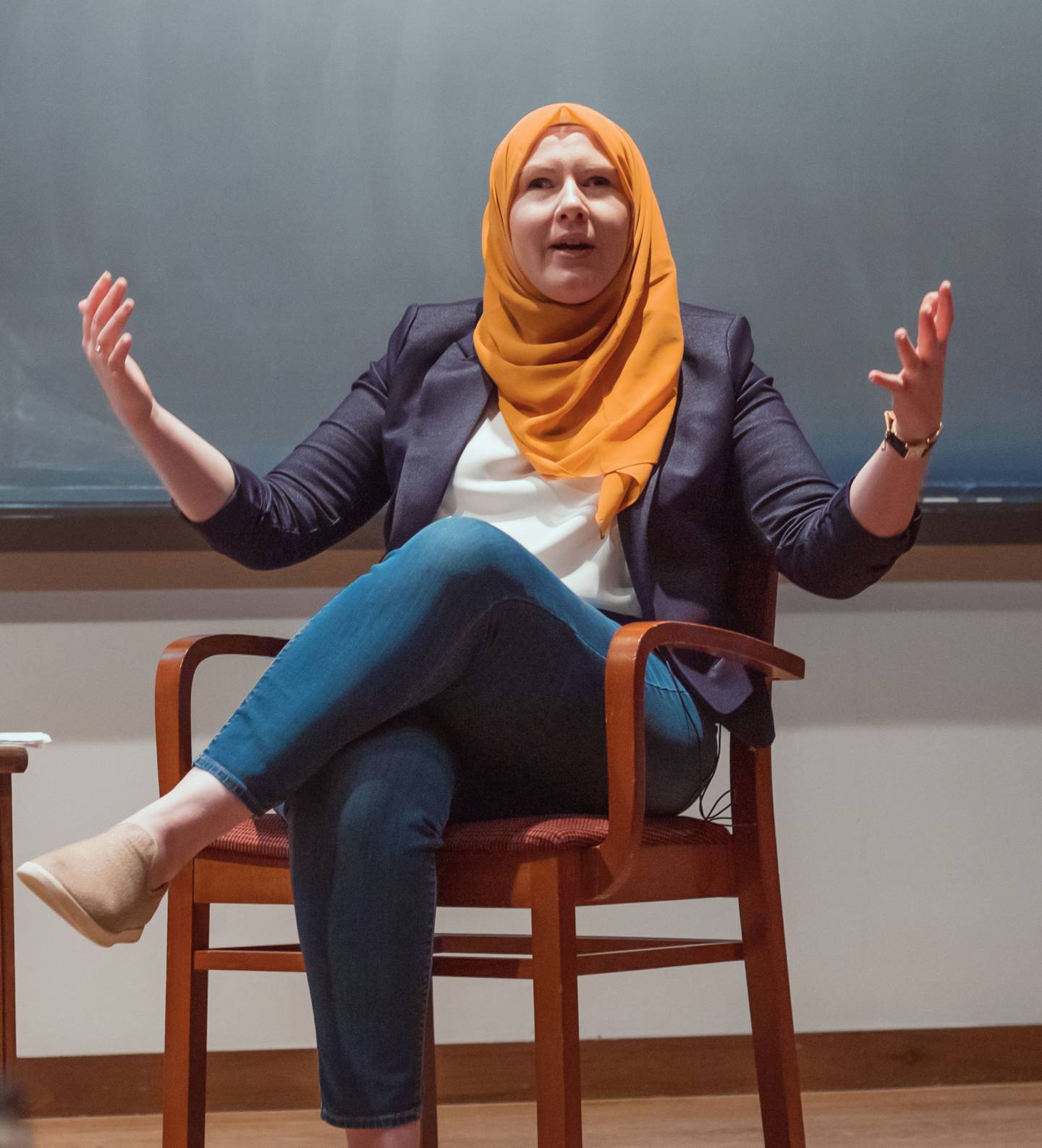 G. Willow Wilson is co-creator of Kamala Khan, the Marvel Comics superhero who protects Jersey City. More recently, Willson has taken on the challenge of creating a Wonder Woman story.

“Now more Muslims artists and writers are giving themselves permission to pull on those threads,” Wilson said.

She wants to encourage artists to work with their truths and not think that Islam needs to be in opposition. “If you pull on those threads of culturally specific art forms, we can have a conversation about whether it's in the letter of Islamic law, but certainly it is an expression of joy within the religion and that makes it legitimate,” she said.

The conversation shifted to the power of storytelling. Wilson said comic books allow a special approach. “There are certain stories that you need that particular combination of words and pictures to tell well,” she said.

Wilson was asked by Marvel to write the story of the new Ms. Marvel, Kamala Khan, with Sana Amanat. Wilson said writing comics is a profoundly collaborative experience. The character she and her team created represents hope for Wilson.

In creating this character, Wilson explained that it was an intentional choice to make Kamala live in the real world, down to locating Kamala and her family in Jersey City, removed from the epicenter of the action in the Marvel universe, Manhattan. High schoolers from McNair Academic High School, who were in the audience, later noted how real the character seemed to them, and how they saw themselves and their classmates within the Marvel world.

It was also important for Wilson that Kamala had a physical power set that wasn’t “esoteric,” that didn’t cause “massive Earth-level events.” … “She has to have a solid handle on what the situation is on the ground, what entities are at play, what political things are going on,” she said.

“When you go small instead of huge, more people can see themselves in that situation because it is much closer to our situation,” Wilson added.

Wilson is now writing for DC Comics Wonder Woman. She said that writing a character like Wonder Woman, who has an 80-year history, is different than writing a character from scratch because there are lots of expectations from longtime fans. In the story “The Just War,” she said she wanted to add nuance about what happens to a character when dropped into messy, politically entangled situations. “She wants to fight for the right side, but doesn’t know what that side is, and even if her presence would be good,” Wilson said.

Wilson said that the first question should always be if the character can make a positive difference.

Turning to novels, Wilson described the importance of “being upfront to one’s own role in the story.” Her first novel, “Alif the Unseen” (2012), has a scene with a nameless American convert who isn’t the focus of the story.

“Converting to Islam and living in the Middle East, feeling very small, helped me realize that the amount of things I don't know vastly outweighs by many, many times the things that I do know,” she said.

Wilson wrote “Alif the Unseen” in response the 2005 Egyptian elections, which were the first election cycle in which the regime started jailing young bloggers who used the internet to circumvent state censorship to criticize state figures.

Ans Nawaz, a sophomore in the audience, said it was instructive to hear about Wilson's creative process. Nawaz, who is considering majoring in neuroscience and pursuing a certificate in visual arts, is thinking about the role that art plays in other endeavors, questions that have long occupied Wilson.

Imam Sohaib Sultan said that the Islam and Conversation series “invites prominent voices because they have something important to say about what it’s like to be Muslim in this critical moment — a moment where Muslims as minorities and Muslims as a community under pressure are trying to find their voice and trying to find what it means to be spiritually rooted and ethically guided in all of the diversity of their work.”