This fall semester, Princeton students in the course "Contemporary Art: The World Picture" examined how large-scale art exhibitions challenge and transform the way we look at the world. A key component of the class was a fall break trip to Brazil to visit the 32nd São Paulo Bienal.

The course was led by Irene Small, assistant professor of art and archaeology, who said a goal was to study "the international mega-exhibition as a model for thinking about globalization — how art seeks to question, bridge and transform cultural divisions."

The students met fellow scholars at the Universidade de São Paulo, which has a strategic partnership with Princeton. Francesco Perrotta-Bosch, a graduate student at the university's school of architecture and urbanism, led the class on a tour of modernist buildings, museums and cultural centers. Students from the architecture school led a walking tour they created called an "urban safari" throughout the city. Cristina Freire, professor and curator of the university's Museum of Contemporary Art, showed the group an exhibition she has been working on for several years, which focuses on Latin American art in the university's collection.

The course was supported by the David A. Gardner '69 Magic Project in the Humanities Council, the Department of Art and Archaeology, the Program in Latin American Studies, and the Princeton-Mellon Initiative in Architecture, Urbanism and the Humanities. Programmatic and logistical support was also provided by the Office of the Vice Provost for International Affairs and Operations.

With photos, Small and her students captured the experience. 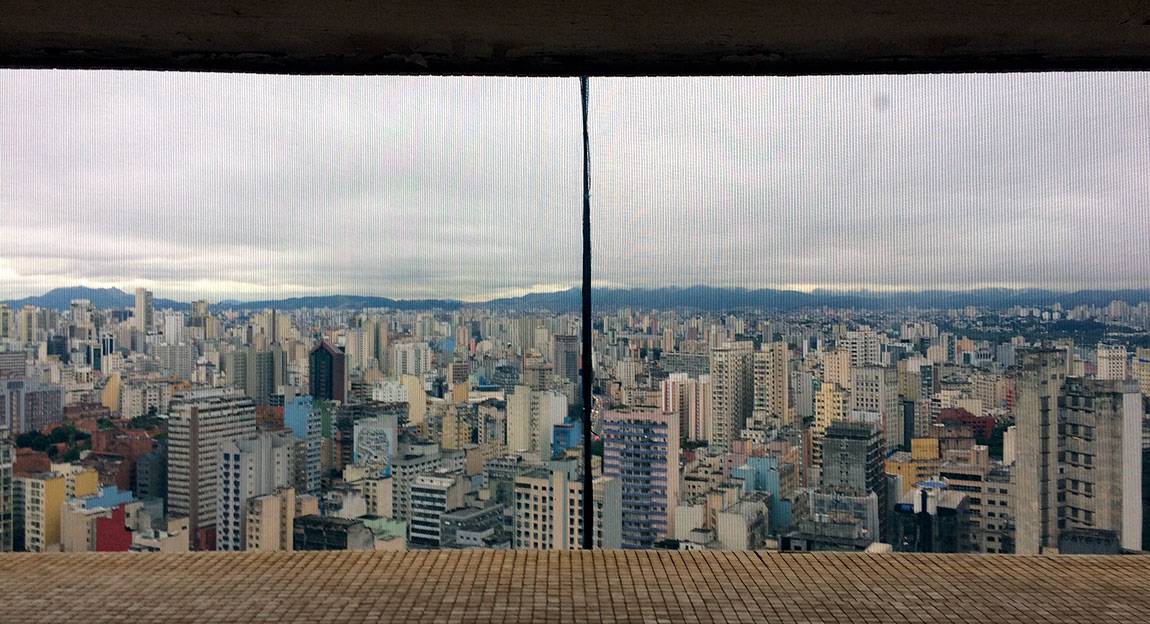 To further our understanding of Brazil's place on the global art stage, the class explored the city of São Paulo. Part of this evolving and complex metropolitan center is seen here through the window of an apartment in the Edifício Copan. This building — home to 1,160 apartments and 70 businesses, and popular among both young artists and working-class Brazilians — is a fitting microcosm of the city that spreads out below; a large, ambitious and uniquely Brazilian attempt to merge the economic, political and artistic worlds. (Caption by Lauren Wodarski, Class of 2017; photo by Irene Small, Department of Art and Archaeology) 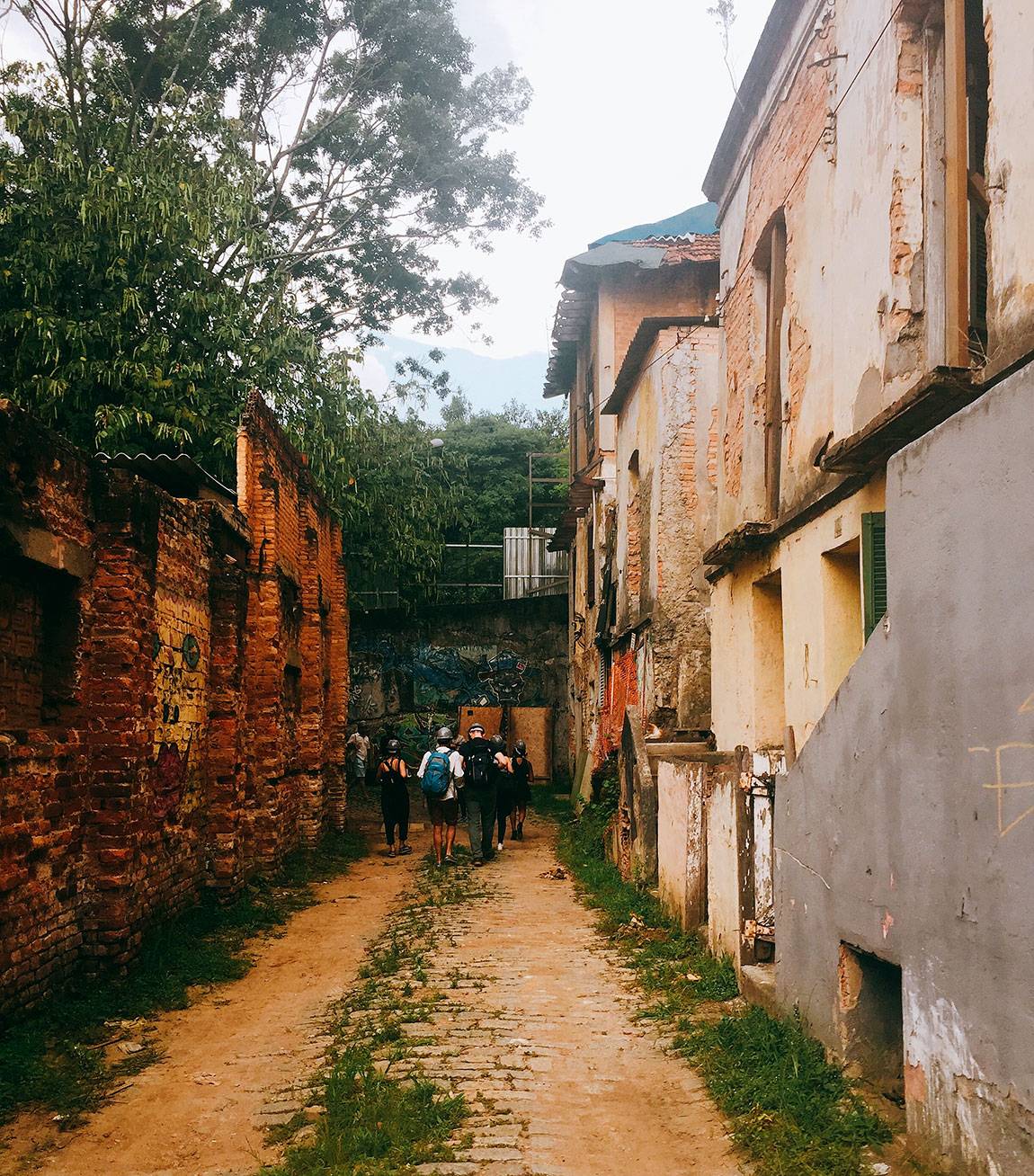 The city-run community center Vila Itororó is a construction site that includes evicted community members' former dwellings. Here we met with organizer and artist Graziela Kunsch, who expressed hope about the center's possibilities for democratic culture, performance and play, but acknowledged its contradictory relationship to a contested urban landscape. While exploring the construction site, I was struck by an irrigation system incorporating one of the many rivers buried under São Paulo's sprawl — a detail that gestured to the submerged poetic and political ecology of this urban microcosm. (Caption by Maxwell Grear, Class of 2018; photo by Julia Shin, Class of 2018) 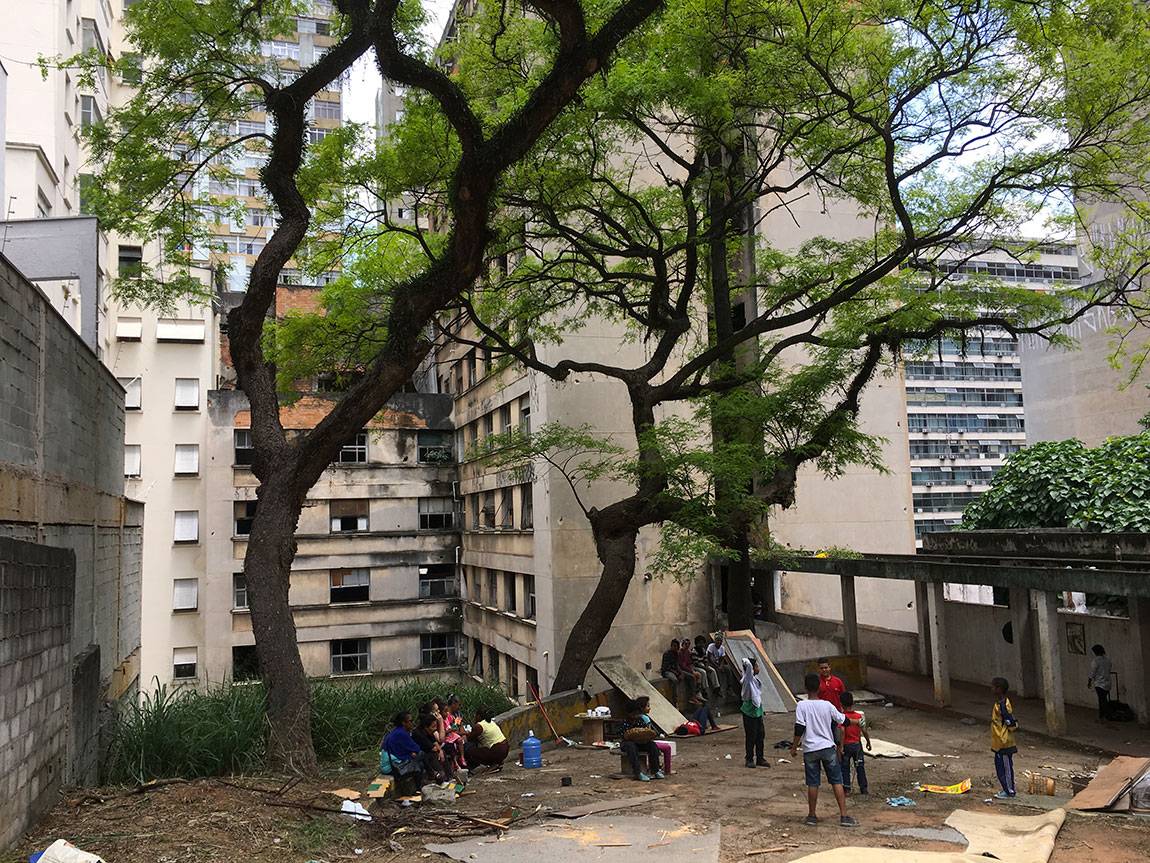 This formerly abandoned building, along with several others throughout São Paolo, was part of an organized mass occupation that had taken place no more than 24 hours before this picture was taken. Our class was graciously invited by a community leader of the building to come tour the interior. We caught them at lunchtime. We walked past families on mattresses and women busily preparing lunch. Men and children lounged and napped outside. This visit humanized our perception of the occupations portrayed in the Brazilian media. (Caption and photo by Simon Wu, Class of 2017) 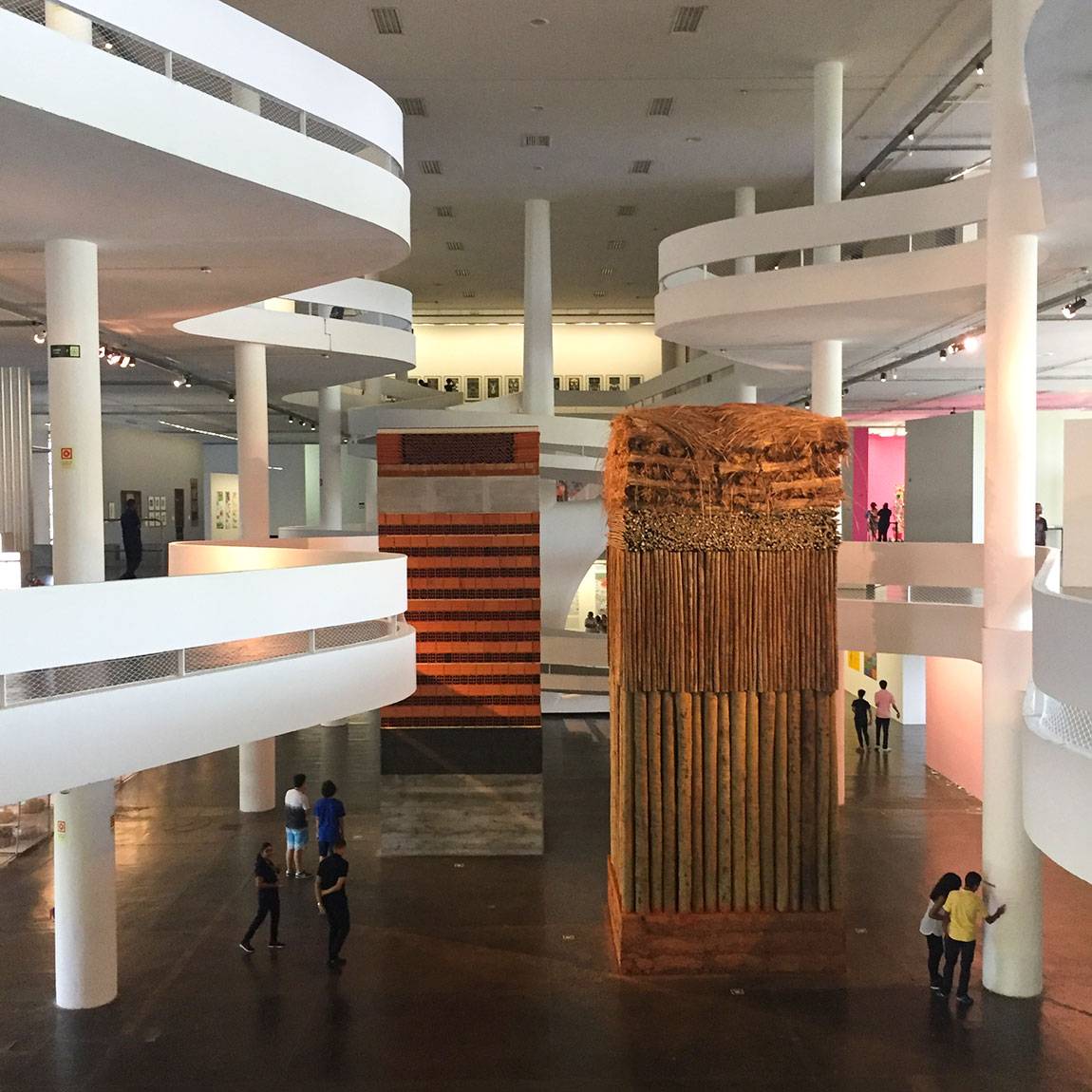 This photo shows Brazilian sculptor Lais Myrrha's "Dois pesos, duas medidas" ("Two Weights, Two Measures," or "Double Standard") installed in the pavilion that Brazilian architect Oscar Niemeyer designed for the 1957 São Paulo Bienal. Founded in 1951, the São Paulo Bienal is the second-oldest international biennale and showcases cutting-edge contemporary work from around the world. I was struck by the counterpoint that Myrrha's use of popular, rough-hewn materials made to Niemeyer's sleek, modernist design. (Caption and photo by Ben Murphy, graduate student, Department of Art and Archaeology) 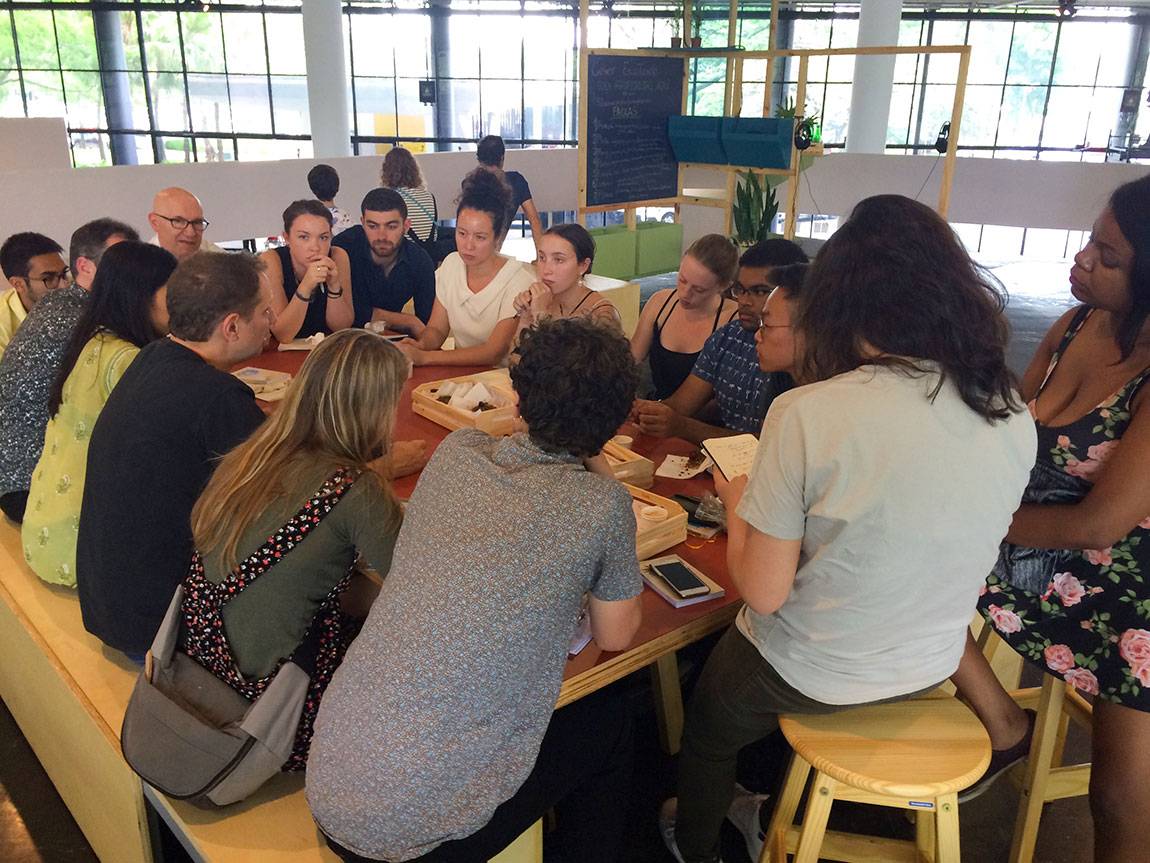 Sitting inside of the 32nd São Paulo Bienal with head curator Jochen Volz (seated on left bench, in black shirt), we felt nervous to be face-to-face with the person who shaped this exhibition. Yet, as the conversation progressed, what struck our group so deeply was how honest Volz was with us about the imperfection of his own work, and his constant drive to seek out the role that art can play in broadening knowledge and experience. We came to understand these elements as part and parcel of "Live Uncertainty" — which the biennale took up as its theme. (Caption by Nina Chausow, Class of 2017; photo by Curt Gabetta, graduate student, School of Architecture) 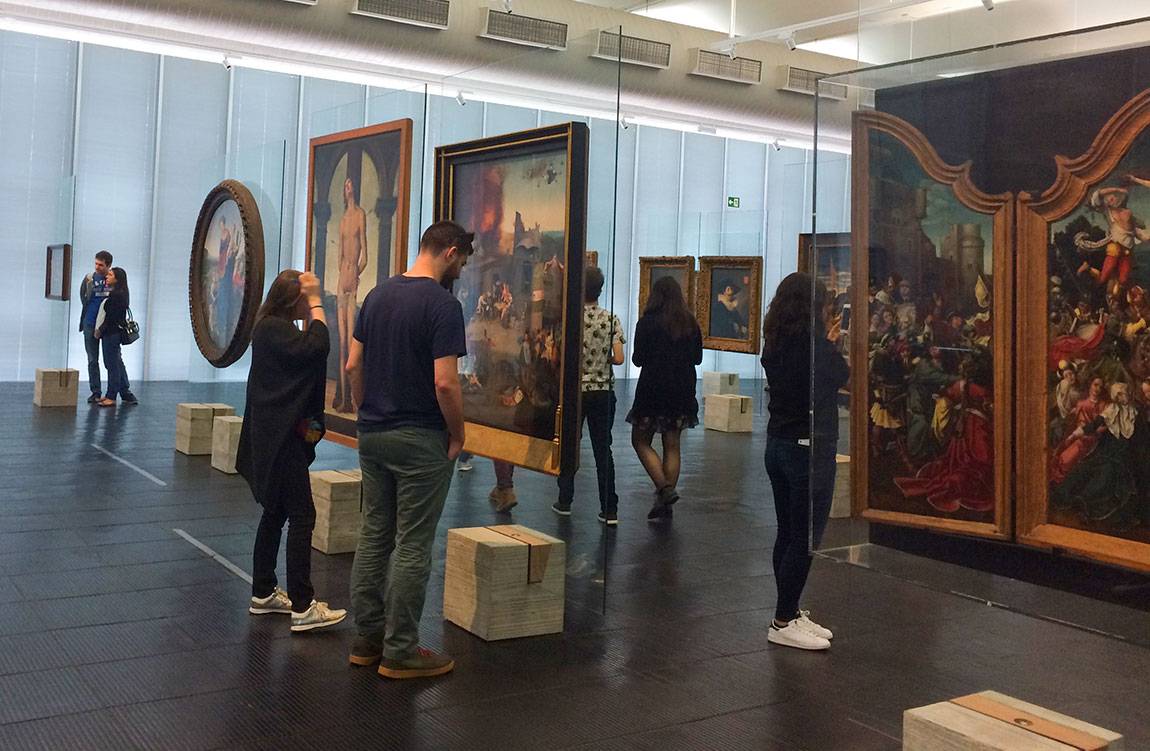 I'm looking at Pietro Perugino's painting of Saint Sebastian in the "Picture Gallery in Transformation" exhibition at the Museum of Art of São Paulo. Next to me is my classmate, senior Samuel Maron. I loved seeing this exhibition design, originally configured by architect Lina Bo Bardi in 1968, where 119 works of art created from the fourth century B.C.E. to 2008 are displayed on glass easels. The exhibition was unlike anything I had seen before, and I was struck by not only the appearance of the "floating" works, but also by being able to see the backs of paintings. (Caption by Emily Kamen, Class of 2017; photo by Irene Small, Department of Art and Archaeology) 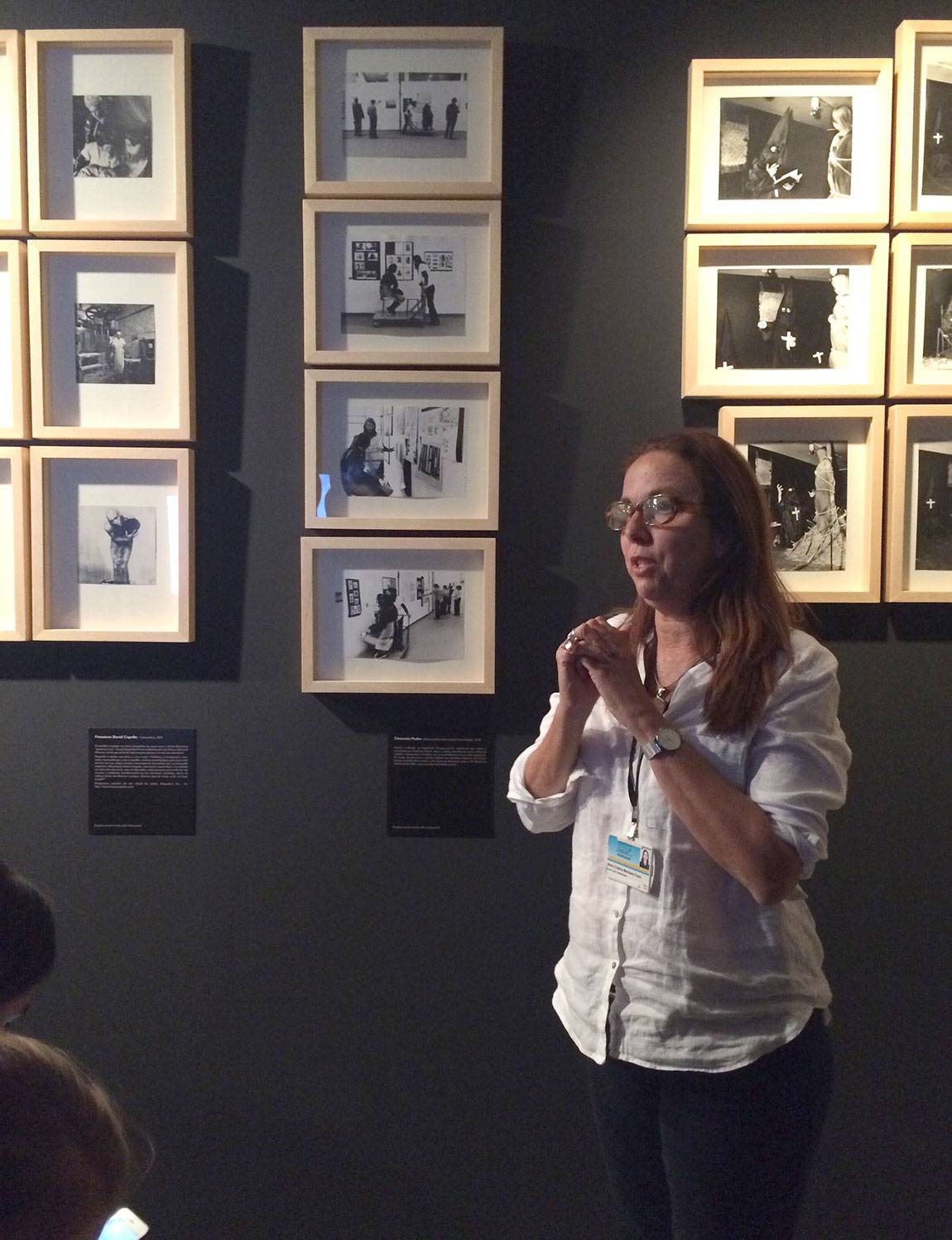 After spending a few days at the biennale, our class had the chance to meet with Professora Cristina Freire from the Museum of Contemporary Art of the University of São Paulo. It was fascinating to learn about the dual-pronged work of the museum's curators, who act concurrently as professors at the university and must manage their exhibitions under state-controlled budgets. Here, Freire is describing work from the exhibition "Distant Neighbors," which explores the complex dynamic between Latin America and Brazil, the latter at once a dominating continental force and an isolated nation with its own language and history. (Caption by Vidushi Sharma, Class of 2017; photo by Irene Small, Department of Art and Archaeology) 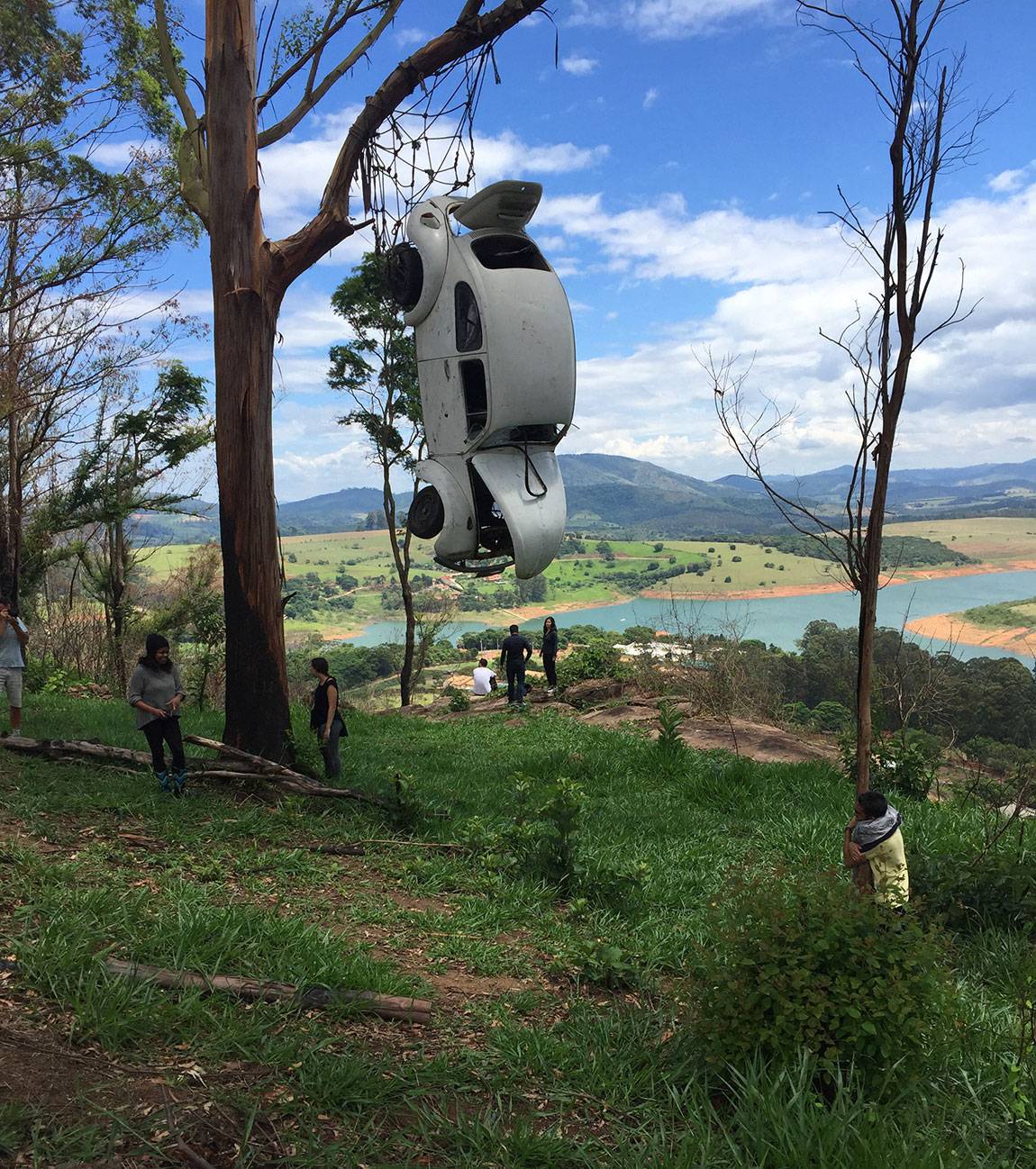 In São Paulo, we learned that urban sprawl had paved over the city's rivers and in the biennale we encountered artworks that confronted environmental concerns in Brazil. Looking out at the view of the Jaguari River during a hike at Fazenda Serrinha, an ecological reserve outside of the city, was an opportunity to contextualize our experience navigating the megacity. After discussing Lucas Bambozzi's sculpture "Revenge Is a Kind of Savage Justice," our guides encouraged us to listen to the trees. We were surprised to find the trees actually whistled! (Caption and photo by Margot Yale, Class of 2017) 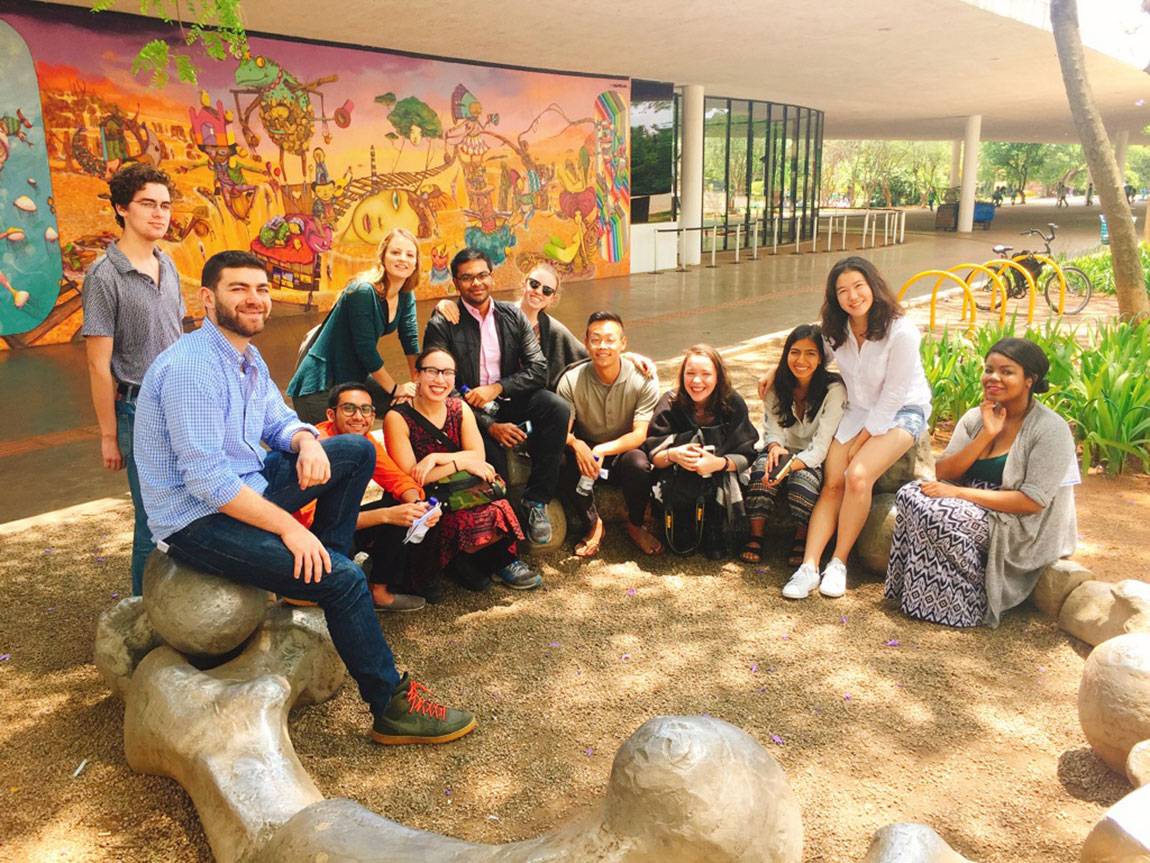 This seminar afforded me the opportunity to develop a critical lens of studying mega-exhibitions while bringing in my natural science background (I am a molecular biology major) to understand how various forms of artworks variously articulate and imagine the world (and worlds). Our trip to São Paulo exposed me to both local and global artist communities and instilled in me the type of liberal arts training that is the hallmark of a Princeton education, not to mention the contribution of this course in helping me compile my certificate thesis, which looks at the interplay of cultural practices and global health. (Caption and photo by Sunny Siddique, Class of 2017)