This spring, 11 Princeton undergraduates in the course "The Art and Politics of Ancient Maya Courts" had an unusual assignment: deciphering hieroglyphs.

"This course is a deep dive into the art and culture within Maya courts from about 600-800," said Bryan Just, the Peter Jay Sharp, Class of 1952, Curator and Lecturer in the Art of the Ancient Americas. "While visual culture was our focus, the goal was to provide students with the basic skills to contextualize and understand that material. This included learning to read hieroglyphs as well as exploring archaeological and ethnographic literature in addition to art historical studies," he said.

Part of that exploration included a week-long trip to Chiapas, Mexico, over spring break, which provided a range of experiences not possible in the classroom or at the Princeton University Art Museum (where a portion of every seminar session was held for students to examine original works of art). The course was cross-listed in art and archaeology and Latin American studies. Just noted the trip provided "direct engagement with architectural spaces, both fully restored for tourism and as-of-yet largely untouched ruins; and appreciation of the geography, climate and ecology within which Maya civilization developed and much of its mythology and imagery derive."

According to Just, the wide variety of the students' majors helped everyone on the trip "rethink certain aspects of what we saw in new ways based on the students' particular perspectives and backgrounds." Whatever their academic concentration, he said he hoped all "gained an appreciation for the richness, sophistication and visual splendor of the ancient Maya. Many came to the course with some basic knowledge of the culture, but I suspect all were rather surprised by many impressive aspects of ancient Maya art."

With photos, Just and the students captured the experience: 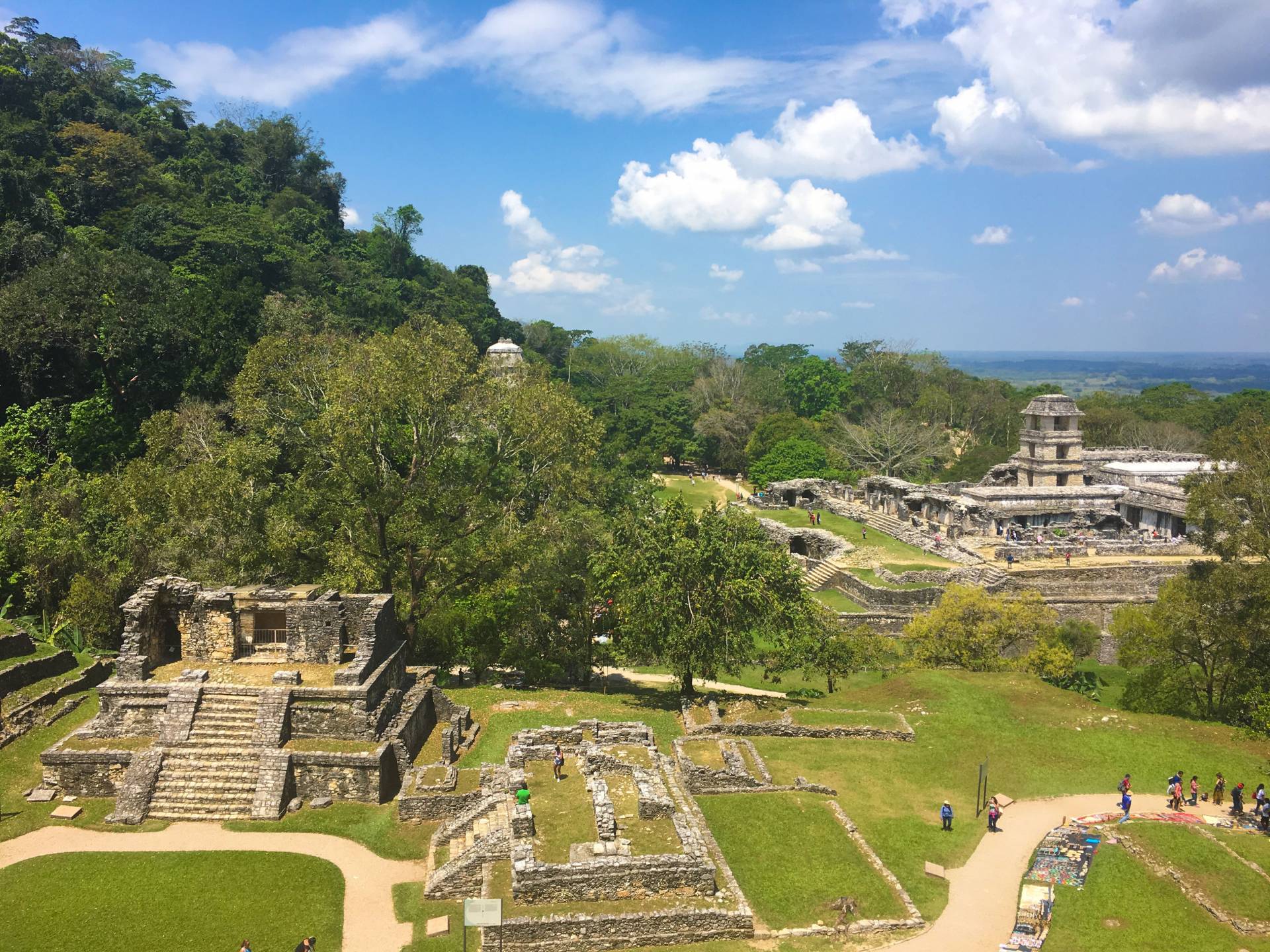 This expansive vista of Palenque is only accessible atop the Temple of the Cross: the site's tallest step-pyramid and the central structure in its iconic "Cross Group." In the distance lie the excavated palace as well as the burial site of the Palenque's famous King K'inich Janaab Pakal. Next to Pakal's pyramidal tomb is the burial chamber of the mysterious "Red Queen," whose unidentified body archaeologists found coated in brilliant red cinnabar. Our first archaeological stop in Chiapas, Palenque seemed as vibrant a mystery as the Red Queen, as great a legend as King Pakal, and intellectually speaking, as energizing a challenge as the many stairs leading up to the apex of the Temple of the Cross.

Photo and caption by Joani Etskovitz, Class of 2017, English major 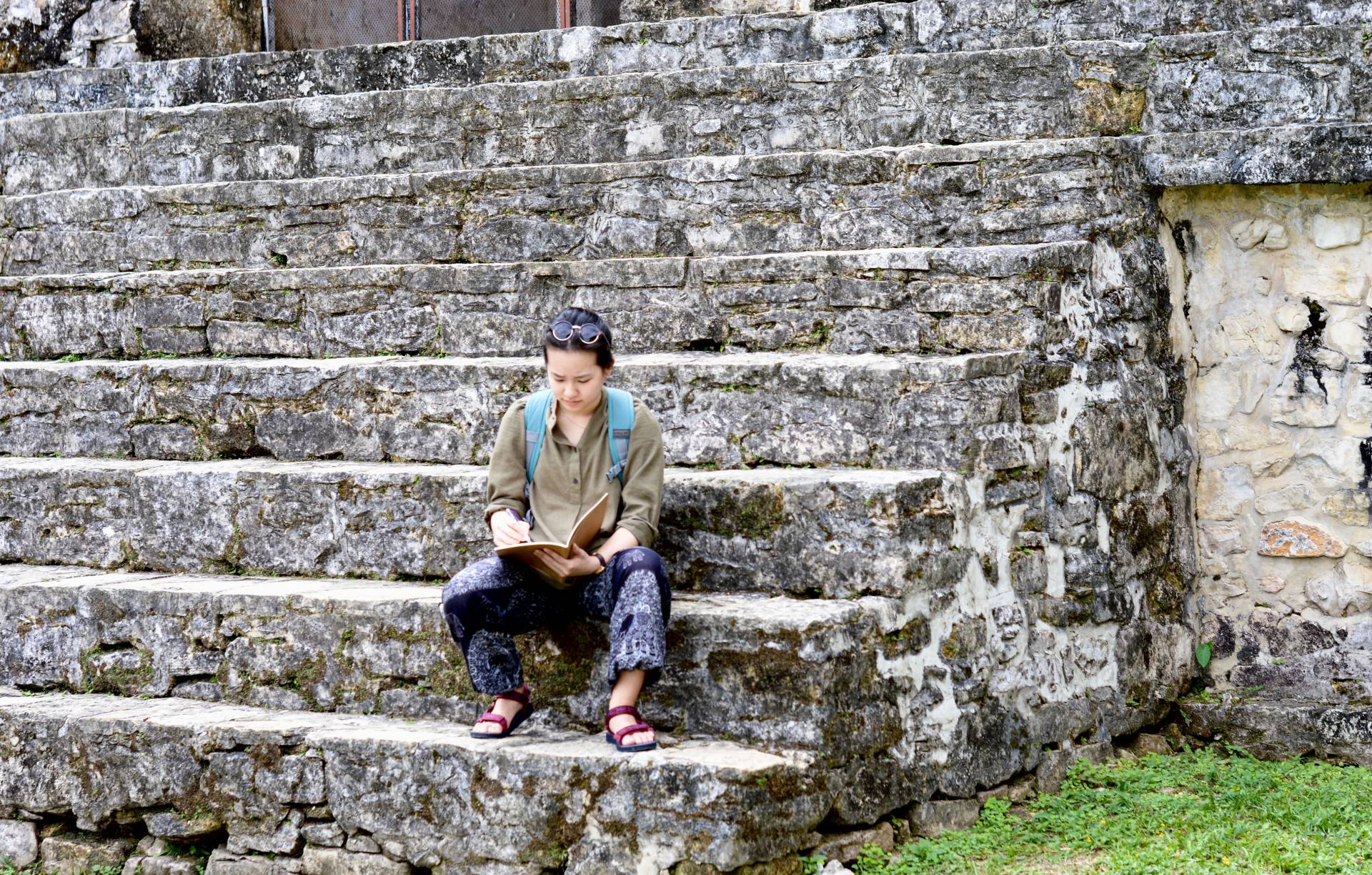 Our class stopped in the interior court of Palenque's palace, and I was drawn to the multiple sets of stairways leading down into the court from all sides. My sketchbook is always with me when I travel so I can jot down notes alongside drawings, and here I made note of the interesting glyphic staircase describing Palenque's return to regional prominence under the direction of King K'inich Janaab Pakal. The sketch proved quite useful when I referenced the readings on Palenque after the visit, and allowed me to contextualize our visit by orienting my sketch alongside maps of the site. 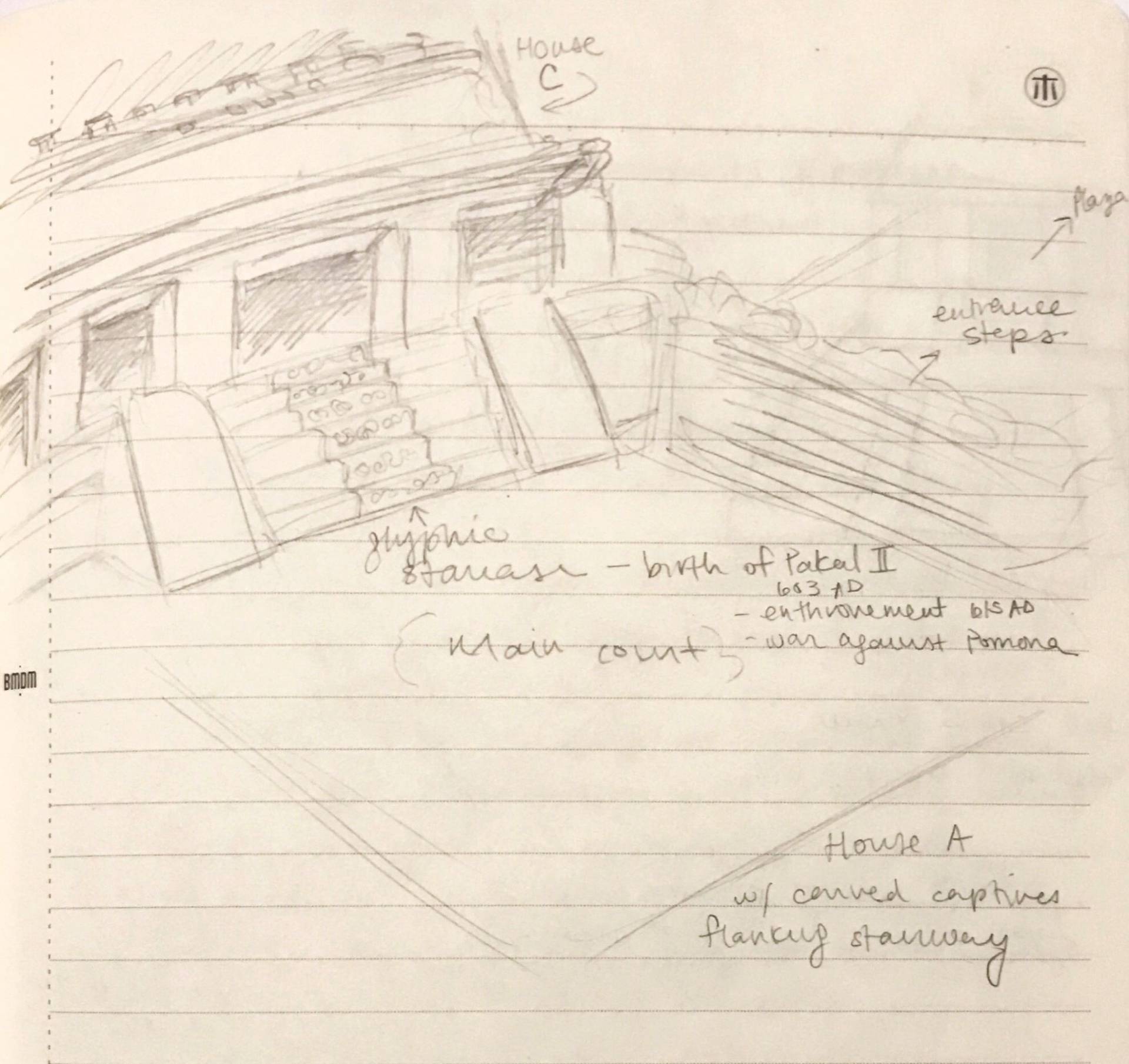 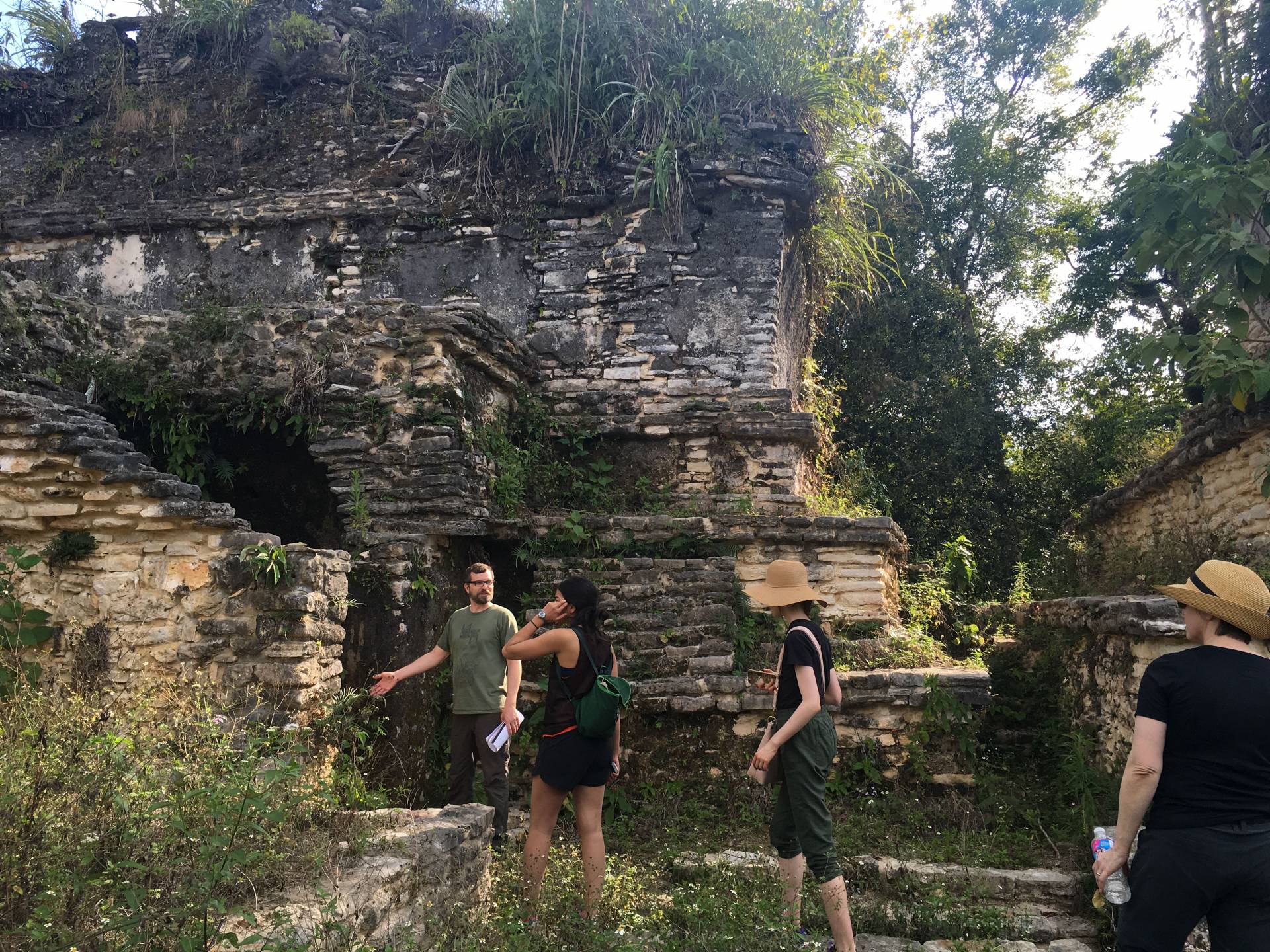 It was surreal approaching the recently discovered site Plan de Ayutla with the understanding that the hill beneath us was actually a pyramid swallowed by jungle growth. As the only people there, we peered through the labyrinthine rooms of a temple structure and explored a building with a massive vaulted ceiling that was so high that it faded to darkness. Plan de Ayutla revealed just how many sites could lay unexcavated, and how the overgrowth can hinder our understanding of it. It currently sits in a political nexus of local and state power, and is contained within a town's private property. Given that my thesis focused on management and ownership of Peru's Inca heritage, it was fascinating to see this as a similar, yet distinct case in the Maya world.

Caption and photo by Charlotte Williams, Class of 2017, anthropology major 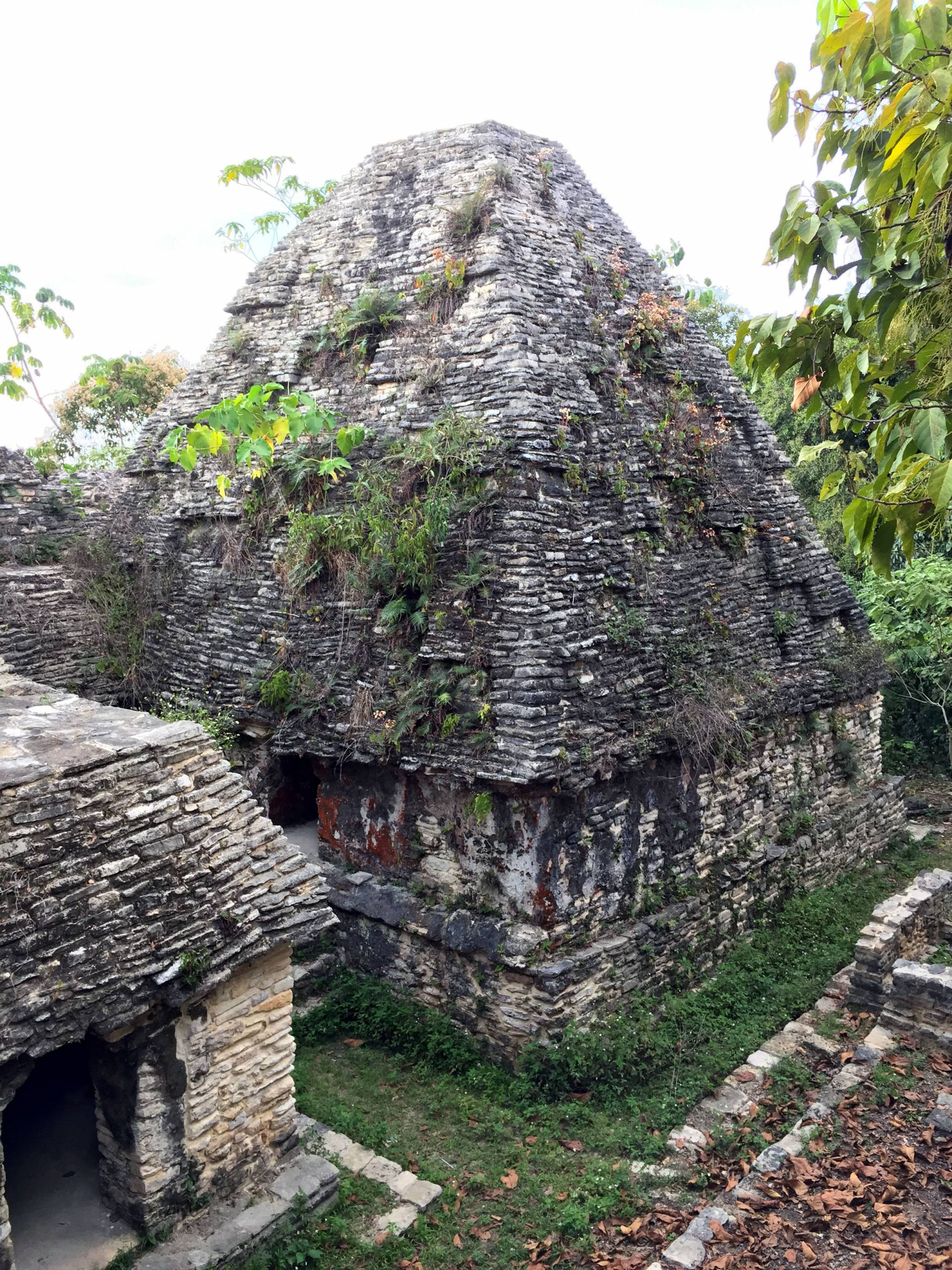 Some might look at the absence of true arches in Maya architecture and interpret it as a lack of advancement. But sites like Plan de Ayutla were strikingly complex and exciting to explore. The roof of this building is thought to have been designed to look like thatch, the default material for more modest housing. The fact that the roof, which captures an enormous amount of interior space, is still standing is a testament to the incredible sophistication and durability of Maya architecture. It's interesting to note that the temperature inside these buildings was impressively cool compared to the outside temperature, due to the high ceilings and thick walls. 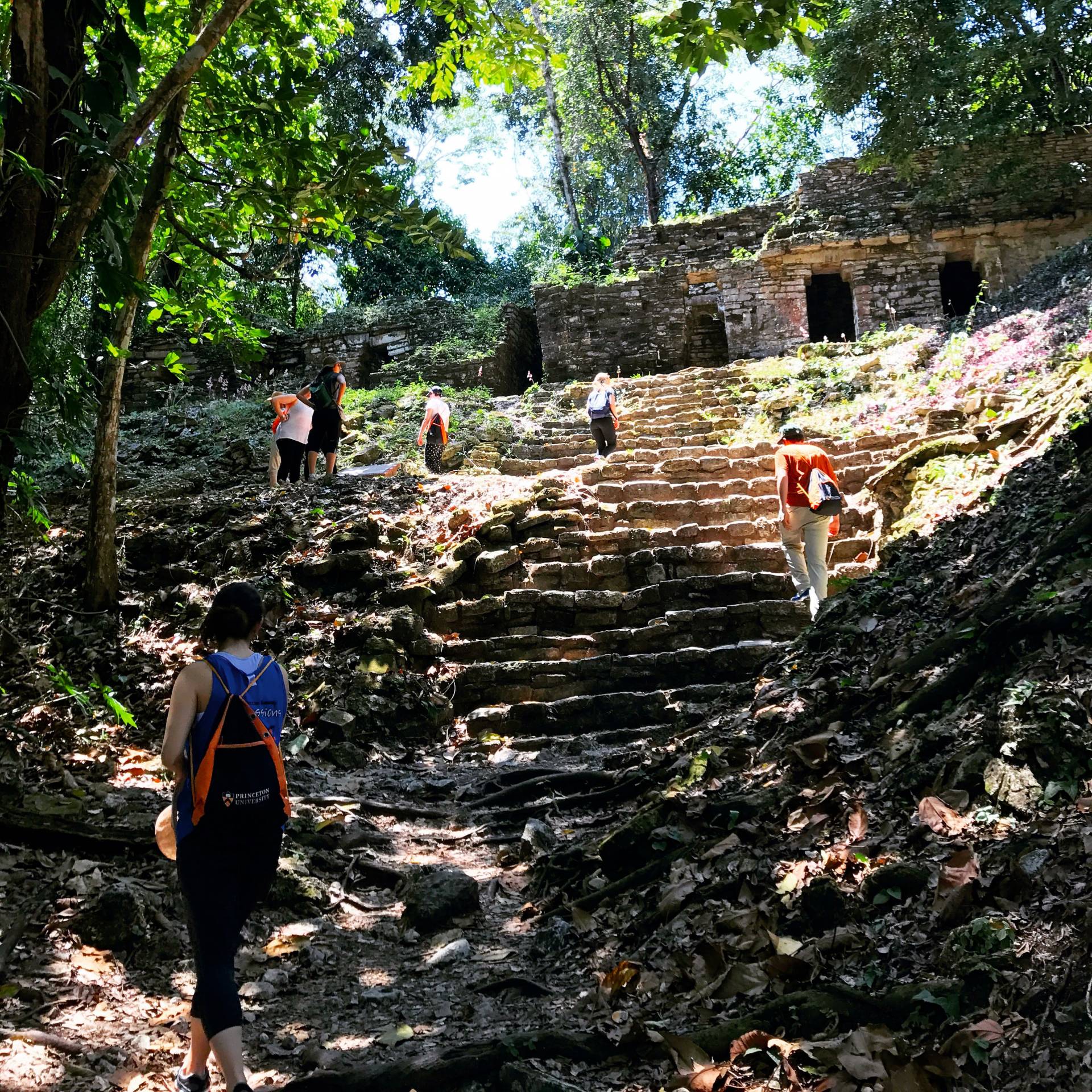 Nestled within a meander of the Usumacinta River that forms the border between Mexico and Guatemala in this area, Yaxchilan is a jewel of an archaeological site thanks to its well-preserved sculpture, towering architecture and lush tropical setting. As with many Maya cities, Yaxchilan's ceremonial core leverages natural topography to enhance the monumentality of commemorative structures. Faced with masonry steps to make it seem an immense feat of construction, this long ascent to Temple 33 in fact encases the natural rise of a mountain. Visiting Yaxchilan and the other Maya kingdoms during this trip provided us all a healthy dose of exercise. 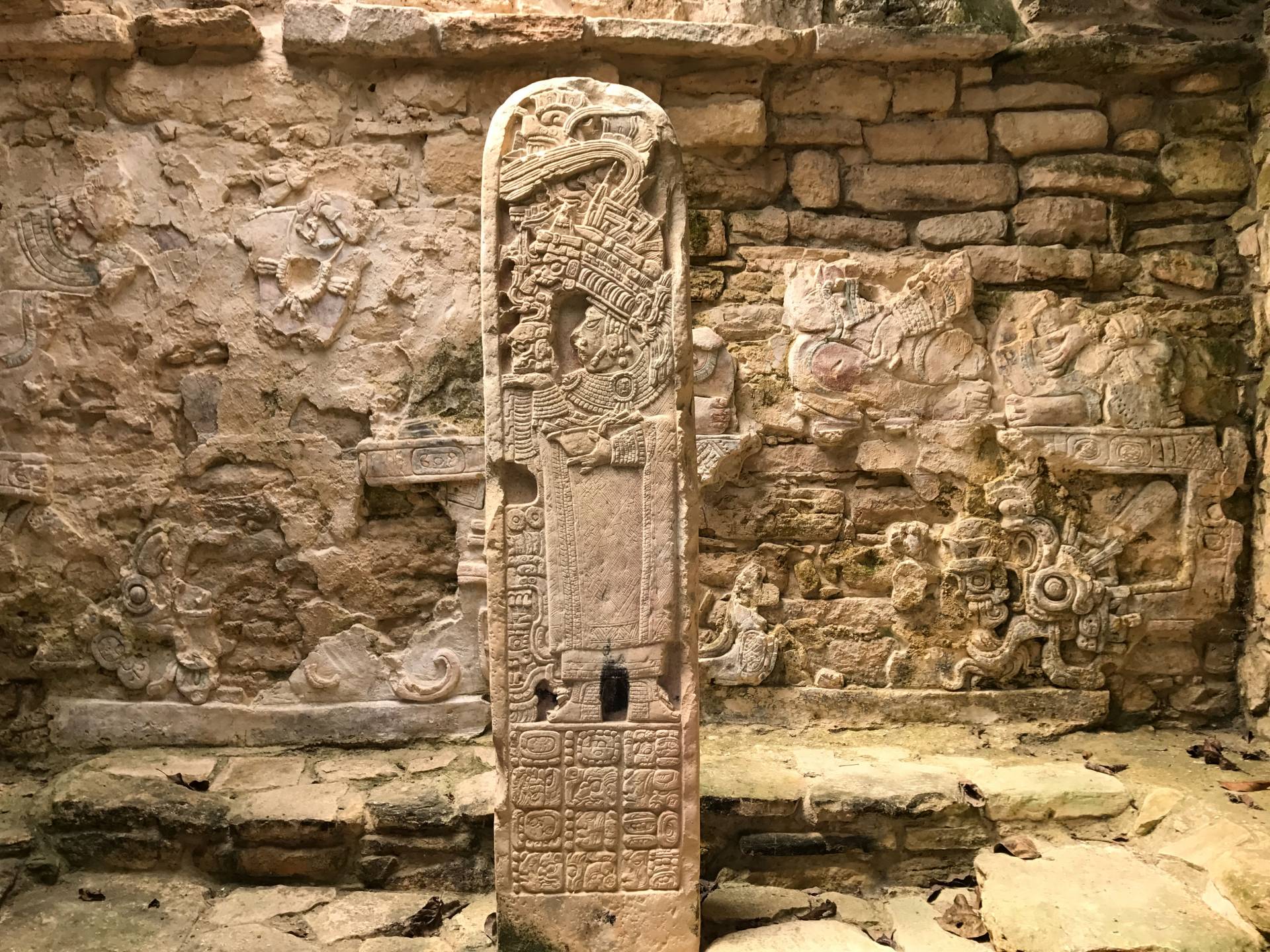 During our visit to Yaxchilan, we were all amazed to see a noblewoman with her own stela and building, since women are underrepresented in most of Maya history and especially on monuments. However, Lady Ik' Skull (portrayed here) certainly merited her place in the annals of history. As a secondary wife of King Itzamnaaj Balam II, Lady Ik' Skull was less celebrated during her time as a queen consort. After the king's death sent Yaxchilan into a decade of contentious political strife, Lady Ik' Skull rose to prominence and installed her son on the throne. Some scholars believe that she governed as queen regent until her death in 751, one of a select few women to rule in the Maya area. 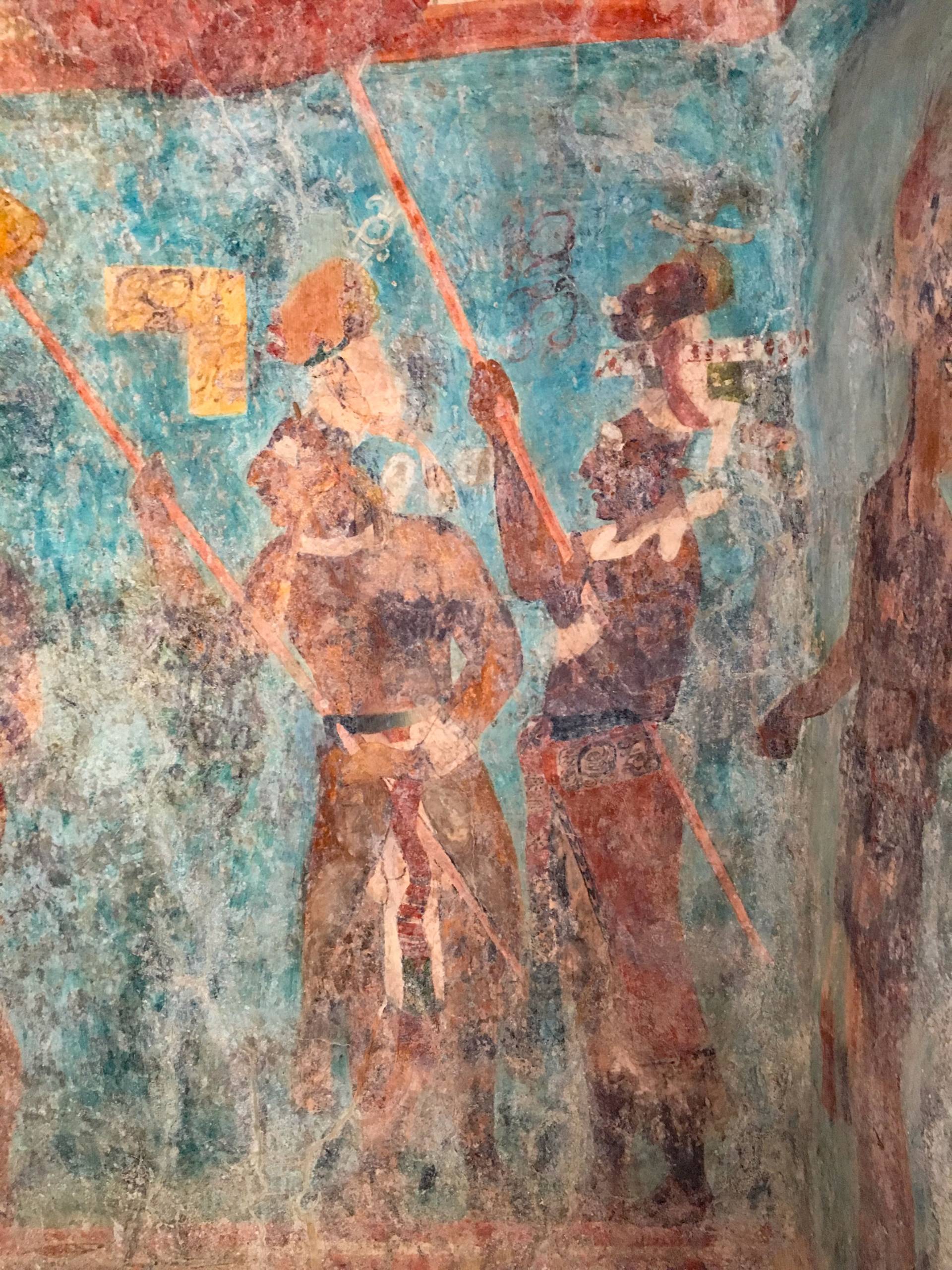 The vibrant paintings in Structure 1 at Bonampak are the best preserved classic Maya murals. The vibrant coloring and pigmentation, which cover the walls and ceilings of the building's three rooms, tell the story of Chan Muwaan's ascension to power in around 790 and depict scenes both of courtly life and bellicosity. The courtly attendant pictured here at the corner of the room is a prime example of the significant planning that went into the execution of these murals. While symbolizing the duties of the courtier, he also has several counterparts located at the edges of all three murals, who seem to help frame the scenes themselves. Being in the space itself made me realize how thoughtful the organization of this project must have been, but also made me question what the audience for these images was. The small size of the rooms and large benches that swallow much of the space in each one, indicates that viewing the scenes may have been a much more intimate experience than the scale of the paintings when considered alone might seem to indicate. 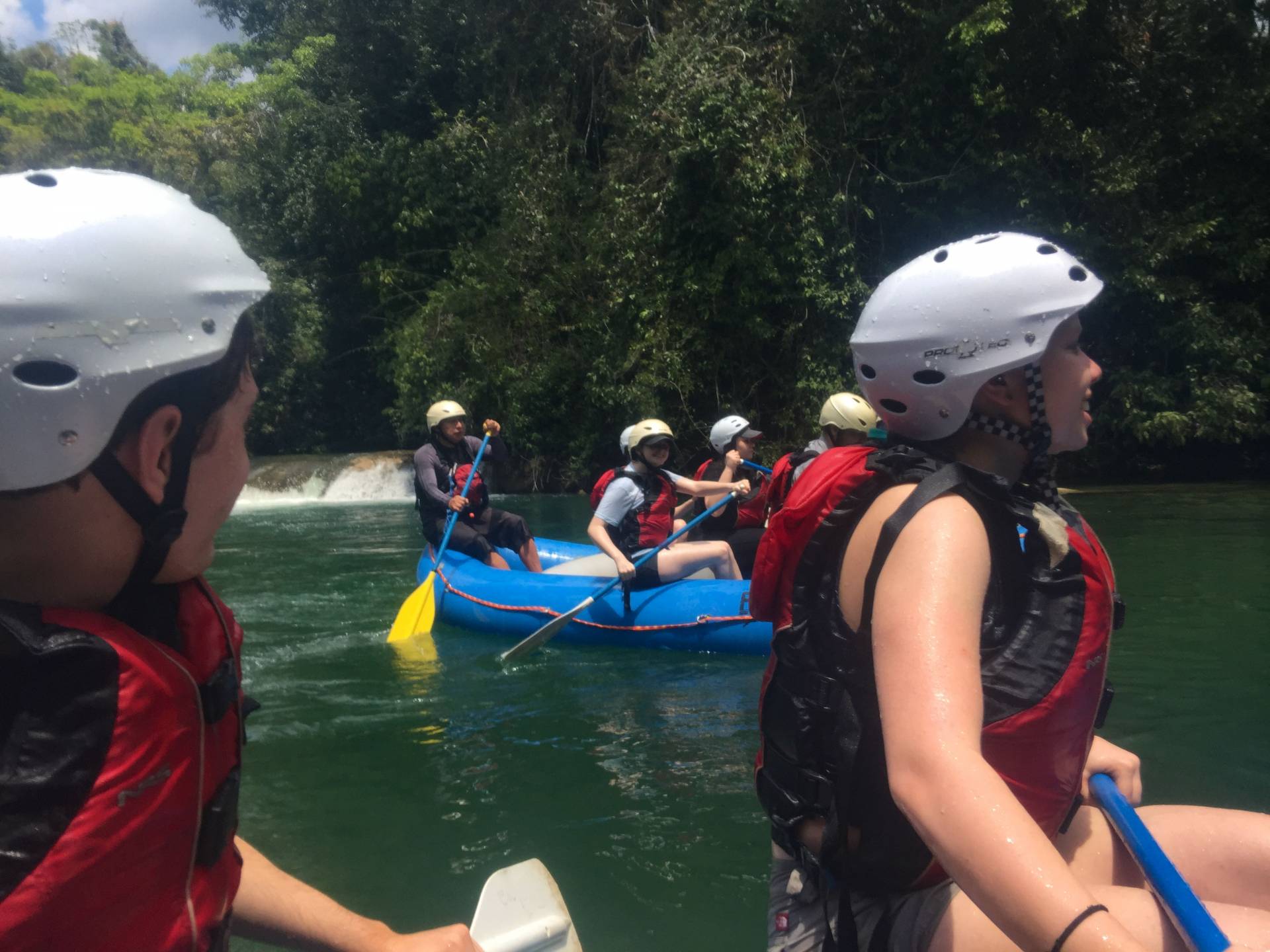 We look like we are simply enjoying whitewater rafting in this photo, but the truth is that we are on an expedition to find the hidden, unexcavated ruins of Lacanja. With local Lacandon Maya as our trusted guides, we navigated through the streams and the jungle as they encouraged us: " ¡Adelante!" I felt like we were tracing the ancient Maya ways of life as we made our journey on the water to the Lacanja archaeological site. We dived into the clear water that was an important transportation route for the ancient Maya, and we marveled at the dense, mysterious and astoundingly beautiful green canopy surrounding us that was the source of life and subject of reverence.

Caption and photo by Hyejin Jang, Class of 2019, art and archaeology major 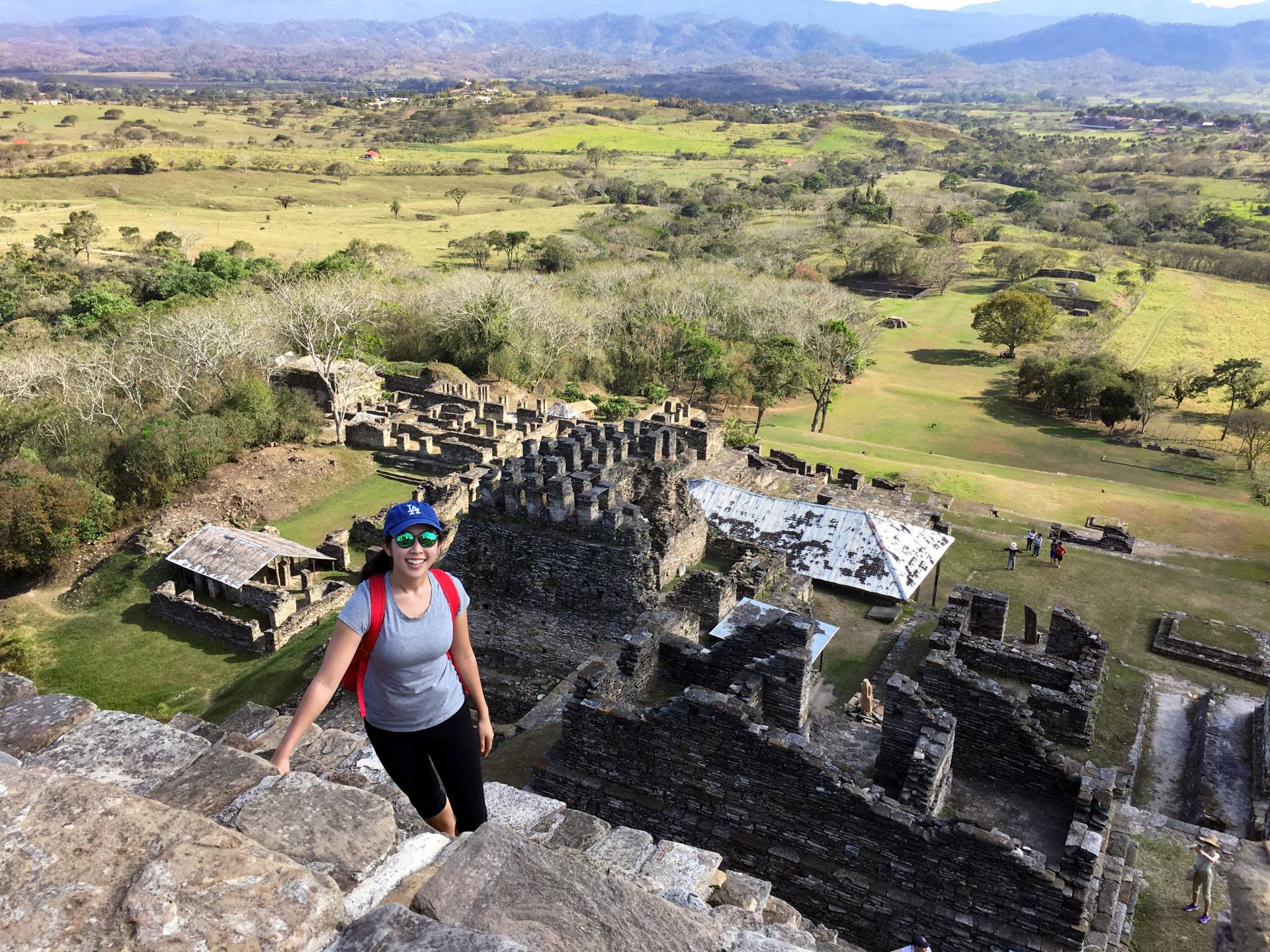 Balancing on the top of a pyramidal temple at Tonina, a Late Classic Maya city known for its militaristic strength, I gained a sense of the meticulous planning and organization required to build such a site. As we ascended each terrace, the steps gradually narrowed and their incline increased. It was not until we as a class were cautiously balancing on steps no bigger than the height and width of bricks did we realize the extent to which these architectural decisions limited access to and determined the use of these uppermost structures. As we descended, some on our backsides, some on all fours, we could not help but marvel at the vast landscape before us and the towering architectural feat underneath us.

Collectively, the students brought innumerable insights to the subject matter and were energetic and adaptive travelers, and allowed me to remember the initial wonder and excitement of my first visits to the grand kingdoms of the Maya west.

Caption and photo by Bryan Just 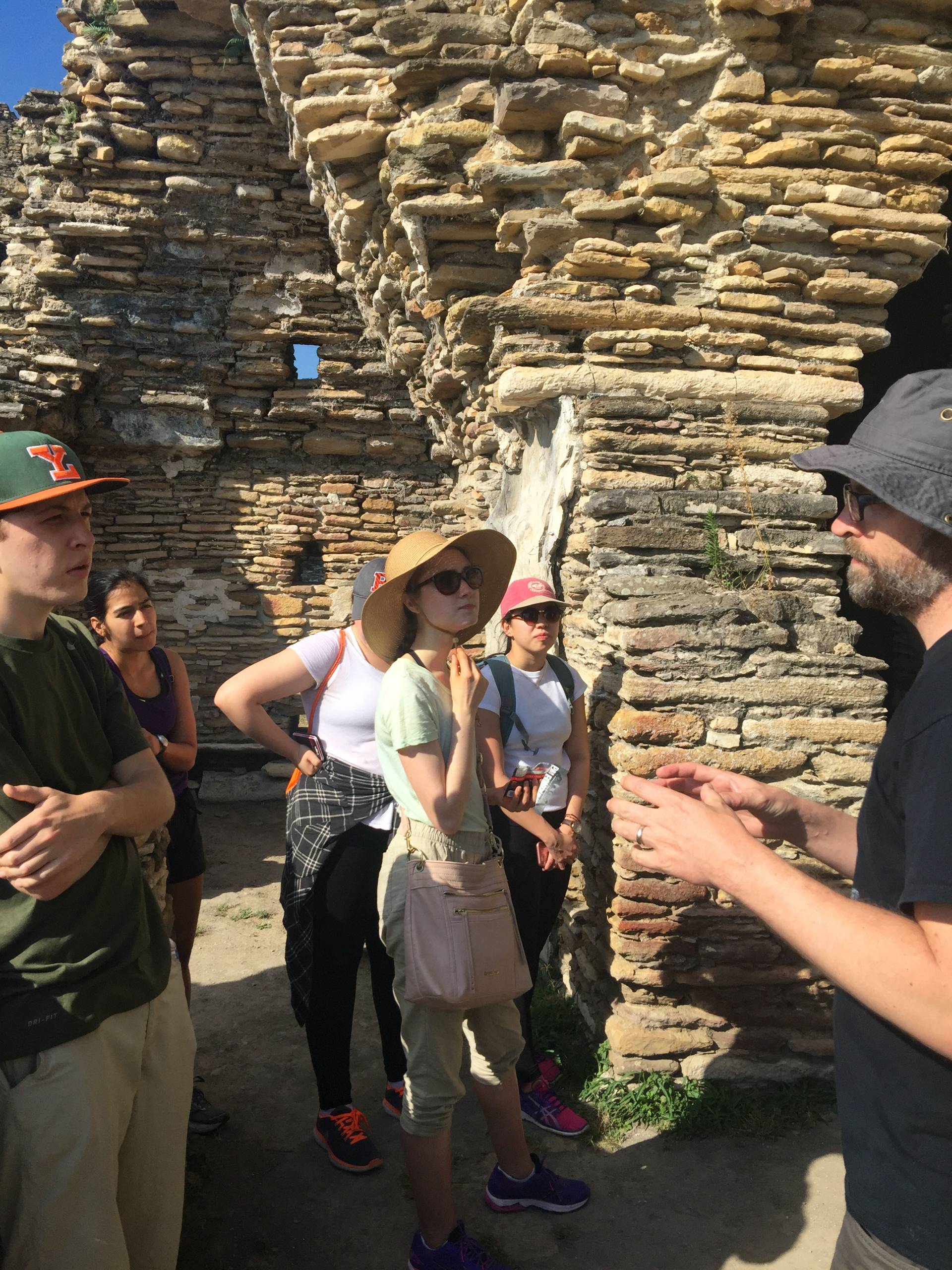 Tonina is the westernmost major polity in the Maya world. Professor Just is telling the group about the unusual architecture of the palace that we are standing in. Tonina is one of the most unique and spectacular Maya cities. Situated 2,700 feet above sea level, the city's defining characteristic is a huge, seven-layer pyramid built from a hillside. The building we are standing in is on the fourth or fifth platform, more than 100 feet above the base of the pyramid. The peculiarities and stunning views of Tonina made it my favorite of the sites we visited, and I ultimately wrote about one of its courtiers for my final paper. 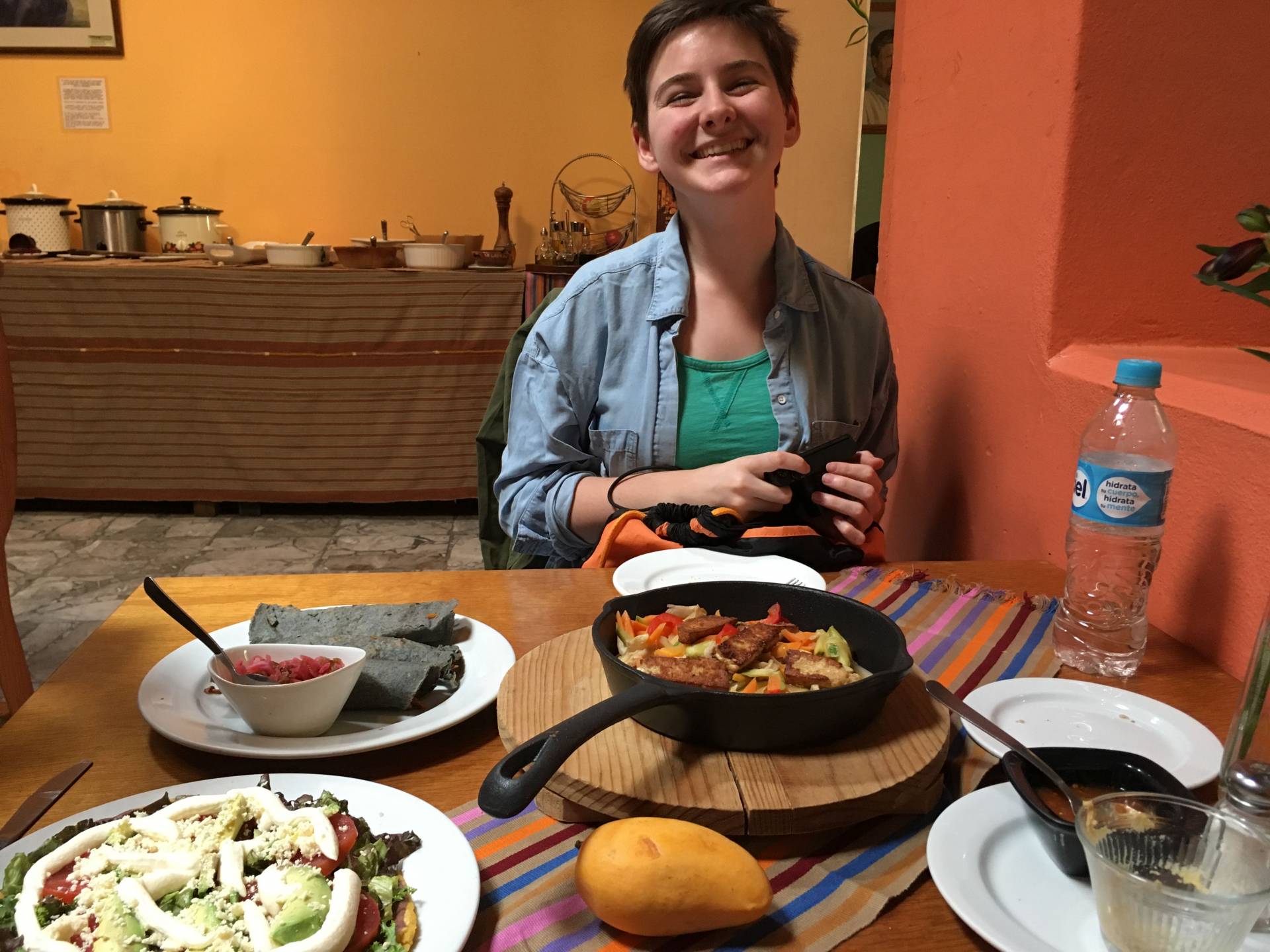 San Cristóbal de las Casas was the link between past and present in our exploration of the Maya world. The colonial-era city receives a steady flow of migrants from the indigenous communities in the surrounding mountains and has also attracted international attention in recent years. During the day, we wandered off in search of food and came across one of many vegetarian restaurants in the rapidly globalizing city. Nearby, we noticed textile and amber shops right alongside cafes that might have been found just as easily in New York. As a Spanish major, I found it especially compelling to see how new indigenous and international residents had altered the character of the 500-year-old city — tofu fajitas are just one way Mexico's identity is shifting.