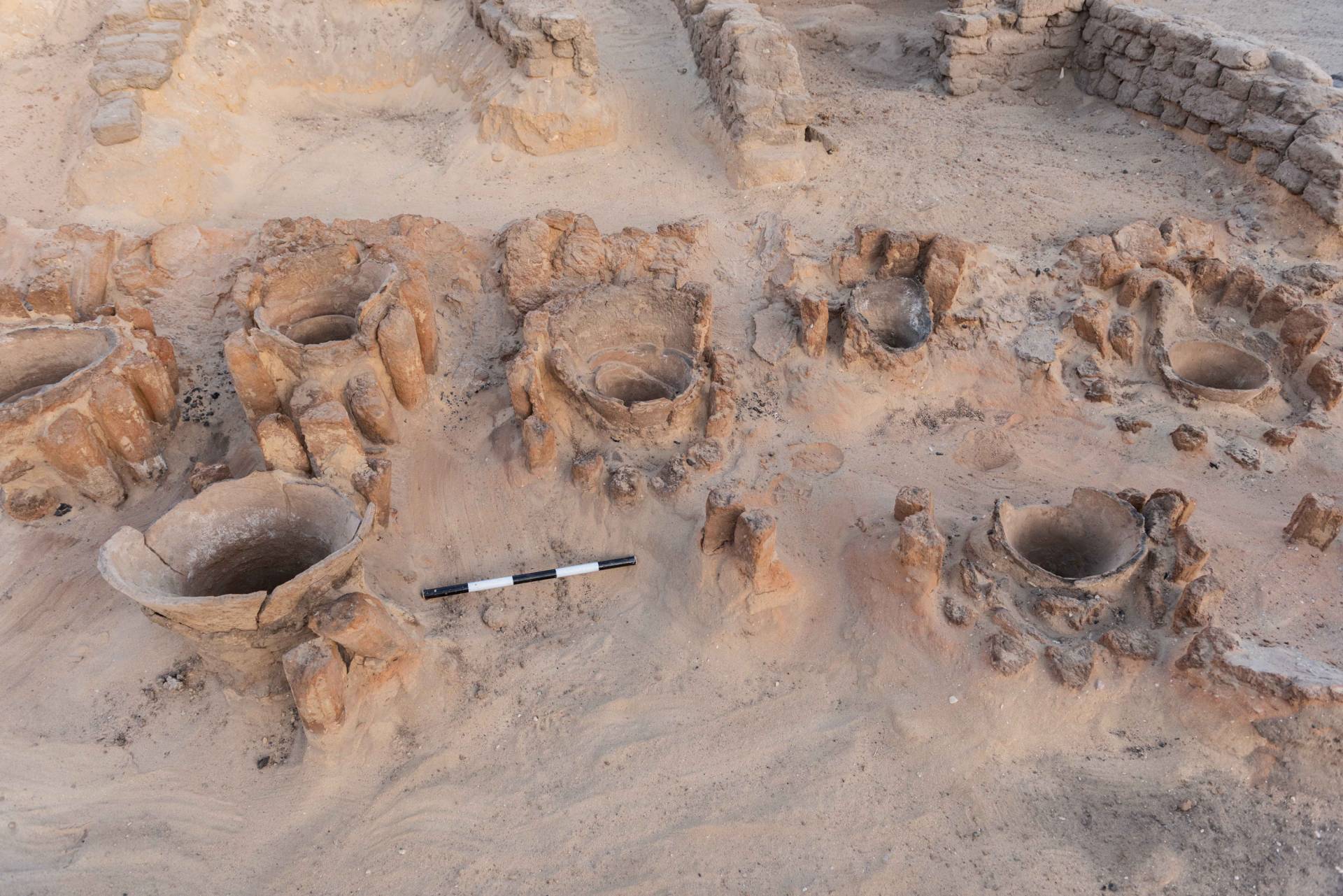 Deborah Vischak, assistant professor of art and archaeology at Princeton, and a team of American and Egyptian archaeologists excavating at the site of Abydos in southern Egypt have uncovered evidence of the world’s oldest known industrial-scale beer production facility. Pictured: Large conical ceramic vats were set into the floor of the brewery structure and supported on the exterior by vertically set mud rods, or “fire legs,” necessary because of the weight of the vats’ liquid contents.

Photo by Ayman Damarany for the North Abydos Project

A team of American and Egyptian archaeologists excavating at the site of Abydos in southern Egypt has uncovered evidence of the world’s oldest known industrial-scale beer production facility. The ancient complex, more than 5,000 years old, had the capacity to produce enough beer to serve thousands of people in a single batch.

Deborah Vischak, assistant professor of art and archeology at Princeton, co-leads the North Abydos Project with Matthew Adams, senior research scholar at the Institute of Fine Arts at New York University. The two scholars are specialists in the archaeology and art history of ancient Egypt.

The archaeological team, which includes Egyptian archaeologists, dated the brewery to the dawn of ancient Egyptian history, ca. 3000 BCE, the approximate time of the political unification of Upper and Lower Egypt and the emergence of the pharaonic state, the era of King Narmer. 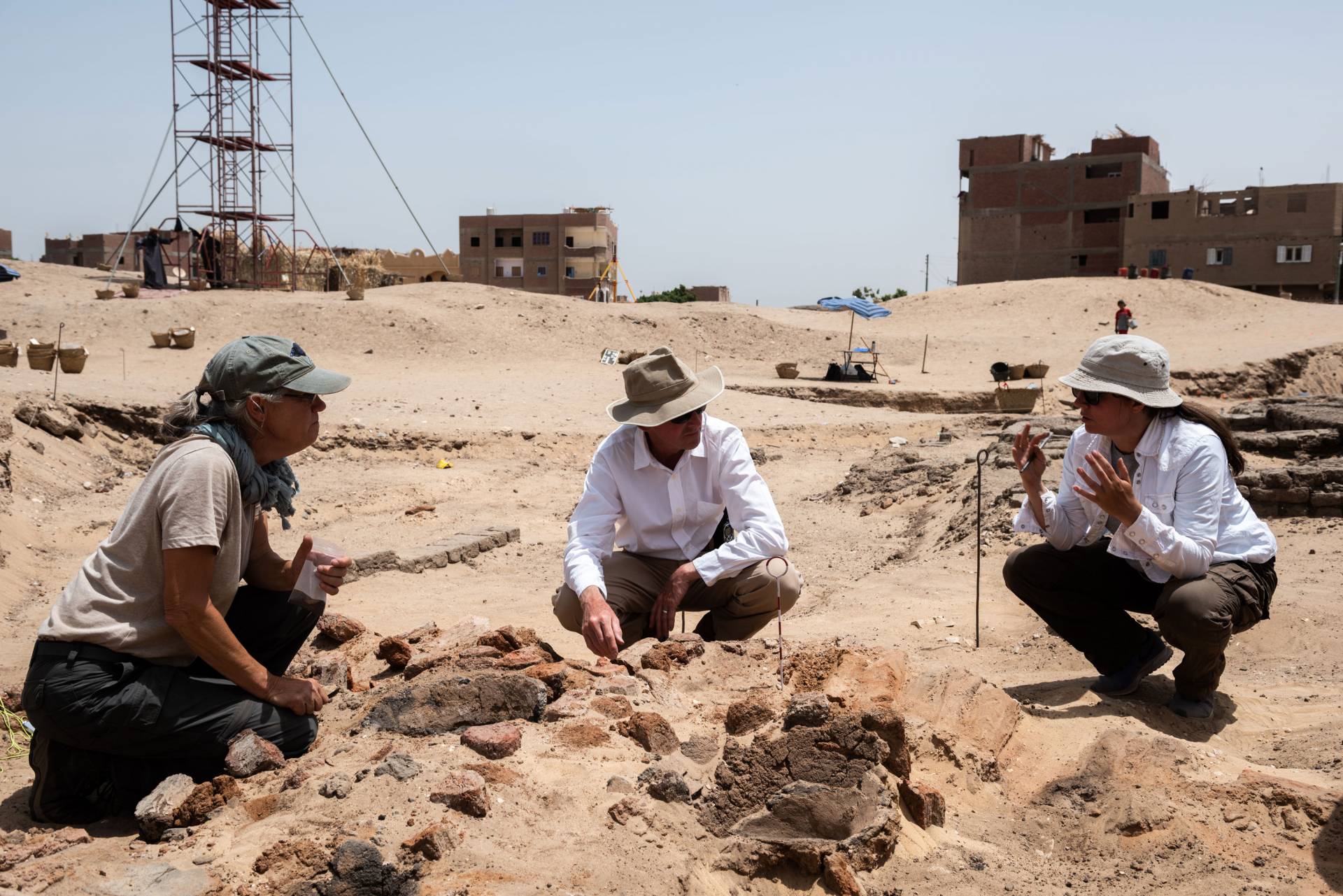 Photo by Ayman Damarany for the North Abydos Project

“The Abydos brewery is quite revealing about the level of resources available to Egypt’s kings right from the start: the agricultural production they could draw on and the labor they could mobilize. It’s these things precisely that allowed them to begin to build gigantic pyramids just a few generations later,” Vischak said. “We have earlier evidence in Egypt for brewing beer, at the sites of Hierakonpolis and Tell el-Farkha, though in those cases at a much smaller scale. Nonetheless those breweries indicate the deep cultural importance of beer-making in Egypt, and they provide important context for understanding why the first kings would invest the extensive resources necessary for this royal brewery at Abydos.”

“The capacity of the facility was industrial in its scale and unprecedented for its time, able to produce many thousands of liters, and probably built to supply the funerary cults of Egypt’s first kings, in which rituals were conducted both to worship them as divine figures and to sustain them in the land of the dead,” Adams said.

British archaeologists excavated the brewery in the early 20th century but mistook it for kilns used to parch grain and the exact location had been lost. The North Abydos Archaeology team, working in cooperation with the Egyptian Ministry of Tourism and Antiquities, located and began excavating the brewery in 2018 and continued the investigation in 2020.

The brewery, located on the edge of the desert at the northern end of ancient Abydos, consisted of at least eight separate installations, built in parallel and spaced about 8 meters apart. Six of the eight, each approximately 20m long × 2.5m wide × 40cm deep, have been examined so far in the new excavations, partly buried under later tombs.

Each installation contained about 40 large ceramic vats, arranged in two rows and supported by rings of sun-dried mud struts, or “fire legs.” The vats were used for slow-cooking, or “mashing,” a thick mixture of grain and water that was then strained and fermented to produce beer in ancient Egypt. A dark, glassy material was present in the bottoms of many vats, which is the hardened residue of the mash. The spaces between the installations probably served as staging areas for filling, firing and emptying the vats.

Only the below-ground parts of the breweries are preserved, but construction details show that they were originally roofed. Small access ports, or stoke holes, were built into the side walls between each pair of vats for the introduction of fuel and fire, as well as airflow. Wood charcoal was found next to some of the ports, and evidence for the presence of fire was everywhere.

The industrial scale of production at Abydos — estimated at approximately 22,000 liters (5,811 gal.) per batch — has no known equal in the archaeological record from early Egypt. Based on ancient Egyptian figures for the amount of beer provided daily to workers on state projects as part of their wages, this would have been enough to provide a day’s beer ration to more than 8,800 people. In modern terms, these structures together had the capacity of brewing in one cycle roughly the equivalent of a frothy pint for everyone attending a sold-out baseball game at Busch Stadium in St. Louis, Missouri, or Citi Field in Queens, New York. 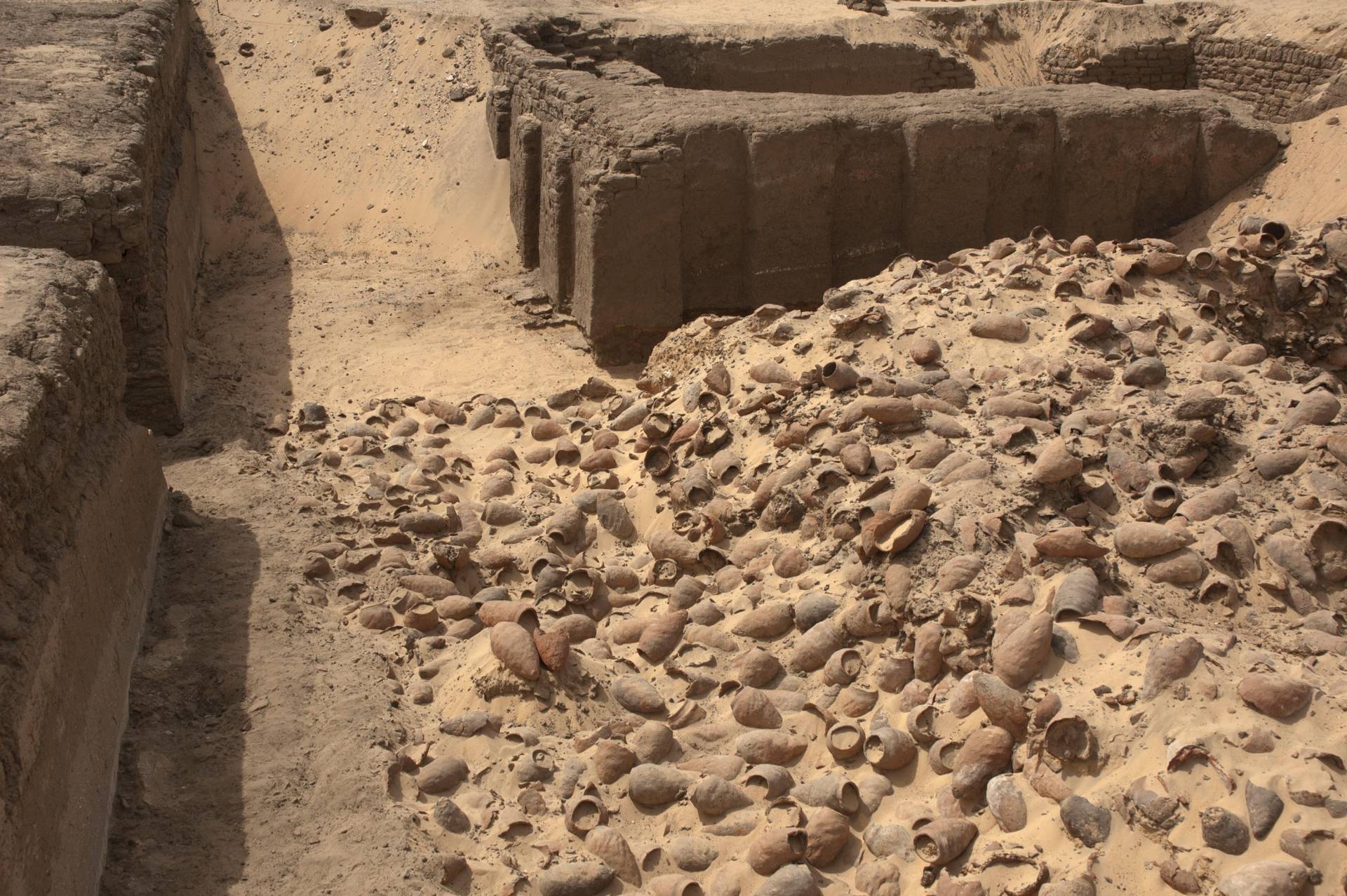 Detail of the deposit of beer jars in front of the east corner gateway of the enclosure of King Peribsen (ca. 2800 BCE).

Photo by Robert Fletcher for the North Abydos Project

Connecting the brewery to royal ritual in Abydos, the ancestral home of kings

The significance of the Abydos brewery appears to relate closely to the unique importance of the site in the history of early Egypt. Abydos was the ancestral home of the kings who first unified Egypt and established its centralized state, and the entire vast desert landscape of the site was reserved for their exclusive use. The tombs they built at Abydos in the 1st and 2nd Dynasties comprise Egypt’s first great royal necropolis, or cemetery, which might be considered a blueprint for those to come later at Giza, Saqqara and the Valley of the Kings. These kings also built enormous companion monuments at Abydos called “cultic enclosures,” which were Egypt’s first royal funerary temples, on the edge of the desert not far from the location of the brewery. Evidence recovered from earlier, extensive excavation of the enclosures under the direction of Adams suggests that there was likely a direct connection between the brewery and these monuments. There is abundant evidence that ritual offerings were made inside the enclosures, including huge deposits of pottery beer jars. These deposits provide direct evidence for the use of beer on a vast scale in royal ritual, beer that was very likely produced on a similar scale nearby.

Both its scale and its location in a sacred desert landscape at Abydos that was reserved exclusively for Egypt’s early kings situate the north Abydos brewery as an important component of a new system of royal expression at a critical moment in its history, along with the construction of monumental tombs and cultic enclosures, as well as the sacrificial burial of courtiers and retainers, and in one case the burial of an entire fleet of boats, that accompanied them. Adams said, “We can now add to these better-known symbols of early royal power an industrial production site built on an unprecedented scale to support royal ritual at Abydos.”

Jamie Saxon of Princeton University and Robert Polner of New York University contributed to this story.