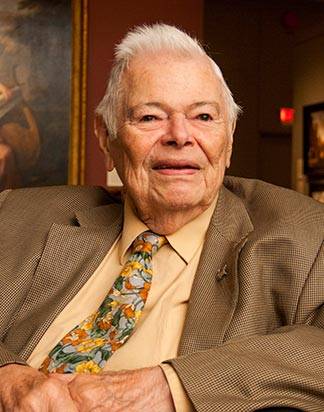 Gillett Griffin, curator of Pre-Columbian and Native American art, emeritus, at the Princeton University Art Museum, died of natural causes at his home in Princeton on June 9. He was 87.

Griffin's passion for collecting began more than 60 years ago while he was a student at Yale University School of Art, where he studied painting and graphic design and earned a bachelor's degree in 1951. He wandered into a New Haven junk shop and purchased a tiny ceramic head for 25 cents. Showing it to George Kubler, a renowned professor of art history at Yale, he learned that the head came from the Valley of Mexico and dated to before 400 B.C.

So began a lifetime of collecting that would later inform his scholarship and teaching.

Griffin came to Princeton in 1952 as curator of graphic arts in the Princeton University Library's Rare Books and Special Collections division, a position he held until 1966. In 1957 he took a leave of absence to design books for Princeton University Press and write articles on the history of printmaking and related graphic themes.

After spending a year in Mexico — where he was the co-discoverer of cave paintings by the Olmec people, identified as the oldest paintings ever seen in the New World, dating between 800 and 400 B.C. — he returned to Princeton in 1967 to join the museum at the invitation of then-Director Patrick Kelleher. Griffin steadily added to his own and the museum's collections, and gave much of his own collection to the museum. These gifts number in the thousands, according to James Steward, the Nancy A. Nasher-David J. Haemisegger, Class of 1976, Director of the museum. Griffin retired in 2005, after 38 years with the museum.

"Gillett is principally responsible for having shaped for Princeton what is widely regarded as one of the world's greatest collections of the art of the ancient Americas — in an age in which it was still possible to do so," Steward said. "He is an essential figure in our history. But he has also been a great friend — a warm, generous, kind man with a sly wit and a ready story. Gillett leaves an indelible mark on Princeton, and on all of us."

"Gillett's art collection was exceptional both due to his keen aesthetic eye and his constant consideration of objects' potential role for teaching," said Bryan Just, the Peter Jay Sharp, Class of 1952, Curator and Lecturer in the Art of the Ancient Americas at the museum. "Since my arrival at Princeton about a decade ago, Gillett has been an enthusiastic supporter of my work to continue his legacy of promoting ancient American art and Princeton's place in the field."

Griffin worked with successive museum directors to develop one of the world's most important collections of ancient Olmec and Maya art. The result of two conferences on Maya pottery and iconography at Princeton he organized in the 1980s is the book "Maya Iconography, which he co-edited with Elizabeth Benson, published by Princeton University Press. Griffin wrote widely for publications ranging from Printing and Graphic Arts to National Geographic.

His trips to Mexico helped connect Princeton to several important endeavors. For example, in 1973, while serving as a guide and adviser to Princeton filmmakers Hugh and Suzanne Johnston on an expedition to film a WNET (PBS) special on the Maya, he and his team rediscovered Temple B — an archetypal Maya palace structure in a dense area of the Yucatan jungle called Río Bec — which had eluded searchers since it has been lost after its discovery in 1912.

Alfred Bush, curator of Western Americana and historic maps, emeritus, at the Princeton University Library, and a lifelong friend of Griffin's, commended not only Griffin's expert eye but also his warm personality. "His friendships with scholars, collectors and dealers in ancient American art, and his ability to bring all these together in a congenial social setting became legendary. His [former] house on Stockton Street was the meeting place of all kinds of people with interests in the indigenous art of the Americas," Bush said.

At Princeton, Griffin also taught courses on pre-Columbian art. When Mary Miller, a 1975 alumna, approached him to be her adviser for her senior thesis, he suggested that together they mount an exhibition of ceramic figures from Jaina, the burial island off the coast of the Yucatan. It was one of the first major exhibitions of Pre-Columbian art at the museum and Miller's thesis was the published catalogue.

Miller, the Sterling Professor of History of Art at Yale and a leading scholar of ancient American art, said: "How fortunate I am to have known [Gillett], and to have had my passion sparked by his. Ever fond of of puns and word play, were Gillett here, he would be making good sport of us all and hoping that we would visit the Princeton University Art Museum, to see the playful world of ancient art that he assembled and generously gave to the museum so that others would share his joy."

Even before arriving as a freshman at Princeton, David Stuart, a 1989 alumnus and the Linda and David Schele Professor of Mesoamerican Art and Writing at the University of Texas-Austin, already knew Griffin. At age 17, Stuart — the son of George Stuart, staff archaeologist, editor and Maya scholar at National Geographic magazine for 40 years — had already made a name for himself in the field and gave a talk at Princeton's conference on early Maya iconography. Calling Griffin "a wonderful mentor," Stuart said that when he was a sophomore, Griffin arranged for Stuart to teach a course in Maya hieroglyphs in the Department of Art and Archaeology; Griffin audited the course.

Stuart also remembered gatherings for students at Griffin's house. "My first time over he asked me what I'd like to drink. I sheepishly asked for a Coke, and three minutes later Gillett hands me a soft drink in a painted kylix — an ancient Greek drinking cup from the sixth century B.C.! This is a great example of how Gillett saw how art could 'live' in the present," said Stuart.

Matthew Robb, a 1994 alumnus who joined the Fowler Museum at the University of California-Los Angeles as chief curator on June 13, took Griffin's survey classes on the Andes and Mesoamerica. "Wow, did he pack the slides in — I'd say it was in the hundreds. Image after image after image — and he knew them all. It was dazzling. Gillett taught me how to see art," said Robb, who previously served as curator of the arts of the Americas at the de Young, one of the Fine Arts Museums of San Francisco.

Born in Brooklyn, New York, on June 22, 1928, Griffin grew up in Greenwich, Connecticut.
While attending Deerfield Academy, he developed an interest in and began to collect New England children's books printed before 1846. In 1951, the same year he graduated from Yale, he wrote, illustrated and printed "A Mouse's Tale," which was nominated one of the Fifty Books of the Year for its design by the American Institute of Graphic Arts.

Griffin also maintained close ties to the greater Princeton community during the more than 60 years he lived in town and was an accomplished painter and portraitist. A retrospective exhibition, "Heads and Tales: Portraits with Legends by Gillett Good Griffin," was mounted earlier this year (January 3-March 31) at the Princeton Public Library, co-sponsored by the Arts Council of Princeton. In 2014, the arts council mounted a solo exhibition, "The Eyes Have It," a collection of paintings, drawings and sketches from Griffin's field notes and diaries.

But what many of Griffin's close friends remember as most remarkable was Griffin's friendship with Albert Einstein. According to Bush, while working at the Princeton University Library, Gillett befriended a Czech refugee and fellow librarian, Johanna Fantova, who had known Einstein in Berlin and Prague in his younger days. When she fled to America at the end of the World War II, Einstein suggested she consider library work. It was 1953. Fantova introduced Griffin into the Einstein household at 112 Mercer St., where Einstein lived with his stepdaughter Margot, a sculptor. Griffin was 25 years old; Einstein was 74.

"His unpretentious social ease, willingness to play at children's puzzles with Einstein himself, his sense of humor (especially puns), his interest in baroque music, all endeared him to Einstein," Bush said. "As an artist he had much in common with Margot. He was soon given open access to the Einstein house by Dukas, Einstein's secretary, and the true keeper of the door."

Over the years, Griffin accrued many personal belongings of Einstein's — including the famous snapshot of Einstein sitting on his porch wearing fuzzy slippers, his compass, a pipe and several puzzles — which he eventually donated to the Historical Society of Princeton. In 2006, after the movie "I.Q.", starring Walter Matthau as Einstein, was filmed in and around Princeton, Griffin asked Robert and Henry Landau, co-owners of Landau's store on Nassau Street, if they would dedicate a small section of their store to exhibit some of Griffin's Einstein memorabilia. They readily agreed.

Griffin is survived by Betsy Cole Roe, his first cousin, once removed; her children, Gillett Cole II (named after Gillett Griffin) and Trip Noll III; and several other cousins, and their children.

Contributions in memory of Griffin may be made to the Princeton University Art Museum.