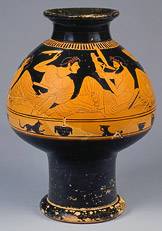 The Princeton University Art Museum and Italian cultural authorities on Oct. 30 signed an agreement that resolves the ownership of 15 works of art in the museum's collection. The signing took place in Rome.

"This agreement meets Princeton's two primary goals," museum Director Susan Taylor said in a statement released after the signing. "First, it is consistent with our long-standing commitment to responsible stewardship of our collections. Second, it encourages the development of future opportunities for collaboration that will advance new scholarship in both Italy and the United States.

"It is our hope that this agreement will open up new avenues of cooperation and exchange," she said. "The fulfillment of these goals is in the interests of the communities served by Princeton and all American art museums: scholars, educators, students, art lovers and the general public. We are grateful to the officials in the Italian government -- in particular Minister of Culture Francesco Rutelli, Giuseppe Proietti, head of the Department of Research, Innovation and Organization, and Maurizio Fiorilli, counsel for the Italian government -- for their cooperation."

The agreement includes three works that became the subject of an Italian inquiry in 2004: a Greek psykter, an Apulian loutrophoros and an Etruscan relief. Two of these works -- the psykter and the loutrophoros, which are types of vases -- will remain on loan to the University museum as part of a joint research program established between the museum and the Italian government. The agreement transfers title to all three objects to Italy.

These objects are among 15 antiquities in the museum's collection that became the subject of broader discussions between the Princeton museum and the Ministry of Cultural Properties and Activities of the Republic of Italy. As a result of those discussions, Princeton will keep seven objects and transfer title to eight. Of the eight objects whose ownership transfers to Italy, half -- including the psykter and the loutrophorous -- will remain on loan to the museum for four years.

"We are pleased with the outcome of our negotiations with the Italian authorities," Taylor said. "This agreement reflects and supports the research and educational mission of the University art museum, enabling us to retain a number of objects, repatriate others that belong to Italy, and have unprecedented access, on a long-term loan basis, to additional material.

Taylor was part of a small Princeton delegation that led discussions with Rutelli's representatives. Talks began in April 2006, after the University sought to learn more about public reports of the Italian government's interest in items in the Princeton museum's collection.

Taylor and Rutelli have said that this agreement ushers in a new era in relations between the museum and Italy.

"In this case, the museum has gained access to indispensable resources in Italy, and so has initiated a potentially new chapter in cooperation and the advancement of scholarship," Taylor said of the loan and research agreement.

Four objects transferred in title but to remain on loan to the Princeton University Art Museum from the Ministry of Cultural Properties and Activities of the Republic of Italy.