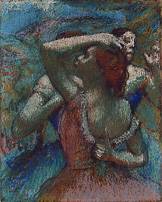 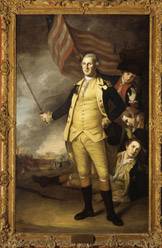 Charles Willson Peale's 1784 portrait of "George Washington at the Battle of Princeton" was commissioned by Princeton to fit inside a frame that once held a portrait of King George II that, according to contemporary sources, "was torn away by a ball from the American artillery in the battle of Princeton."     Above left: "Headdress" is an elaborate work by the Efut peoples of Nigeria. The head is sculpted from a single block of wood, as are each of its swirls of hair.     Below right: Claude Monet's oil on canvas "Water Lilies and Japanese Bridge" represents two of his greatest achievements, according to the new handbook: his gardens at Giverny and the paintings they inspired.     Images: Courtesy of the Princeton University Art Museum Photos: Bruce M. White

The Princeton University Art Museum is celebrating its 125th anniversary with an exhibition that brings together many of the most important works from all areas of its collection. On view through Sunday, June 15, "An Educated Eye: Princeton University Art Museum Collections" also marks the publication of the museum's new handbook, which serves as a guide to its encyclopedic collection.

"The Princeton University Art Museum is one of our greatest treasures," said President Shirley M. Tilghman. "As we prepare to celebrate the museum's 125th anniversary, I am delighted that its curators have built an exhibition around the finest works in its collections and that these and many other masterpieces can now be 'taken home' in the form of a superbly illustrated handbook." 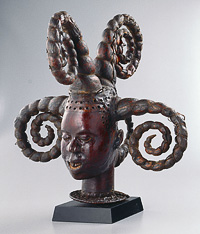 This academic year marks the 125th anniversary of the museum's founding in 1882. The Princeton museum is notable among university museums for the quality and breadth of its holdings, not only in Western European and American art but also in the fields of ancient Mediterranean, Asian and pre-Columbian art.

For this exhibition, curators from each of the museum's departments have selected masterpieces from the collection of more than 68,000 objects spanning ancient to contemporary art. While all works were chosen for their quality, some were also selected for their rarity, or because they represent a critical turning point within the continuum of art history. 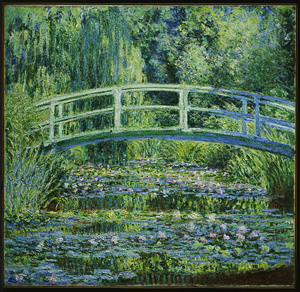 Also on view will be works that are among the most beloved by visitors to the museum, including Edgar Degas' "Dancers," the elaborate "Headdress" by the Efut peoples of Nigeria, a distinctive Olmec shaman and Claude Monet's "Water Lilies and Japanese Bridge."

The new handbook is the first overview of the museum's collection since 1986. The 364-page work includes entries on more than 400 works written by the museum's curatorial staff and guest authors.