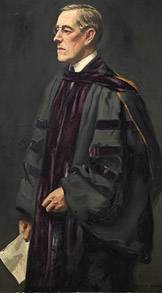 This Sidney Dickinson portrait of former Princeton University President Woodrow Wilson, completed in 1929, is one of 33 paintings in the exhibition "Inner Sanctum: Memory and Meaning in Princeton's Faculty Room at Nassau Hall." The exhibition, which will run through Oct. 30 in the Faculty Room in Nassau Hall, showcases the storied room as the center of the University's history, while also reflecting American society's evolution.

An exhibition currently on display inside the Faculty Room at Nassau Hall is more about the space itself than the individual works of art it contains.

Running through Oct. 30, "Inner Sanctum: Memory and Meaning in Princeton's Faculty Room at Nassau Hall" is meant to showcase the room as the center of the University's history, while also reflecting American society's evolution.

Karl Kusserow, associate curator of American art at the Princeton University Art Museum and curator of the exhibition, said this is the first time the museum has organized a temporary exhibition in another space on campus. "But the reason it's not in the museum," he added, "is really the whole point of the exhibition, which is to interpret not a group of discrete objects, but rather an entire spatial environment. The room itself is the theme."

Visitors can explore the high-ceilinged Faculty Room and study the 33 portraits of Princeton's founders, presidents and distinguished alumni hanging from the oak-paneled walls. The overhead chandeliers have been dimmed and newly installed spotlights have been trained on the paintings. The effect is equal parts cozy and hallowed; "like stepping into a jewel box," said Kusserow.

With help from explanatory text panels and archival photographs arranged along the room's central table, each portrait illustrates its own chapter in Princeton's rich and nuanced narrative. 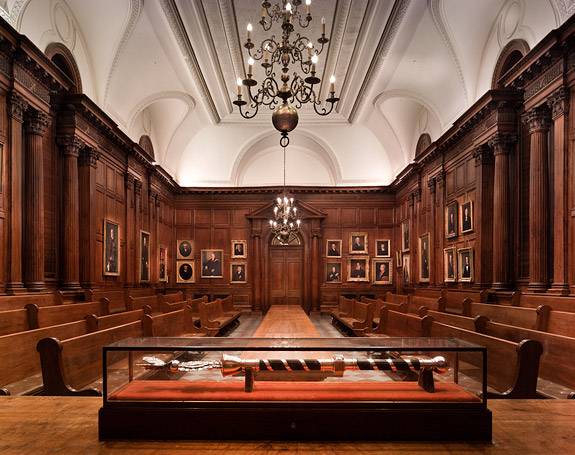 Visitors can explore the Faculty Room and the 33 portraits of Princeton's founders, presidents and distinguished alumni hanging from the oak-paneled walls. In the glass case is the University's mace, which is carried by a faculty member who precedes the president in processions at academic convocations such as Opening Exercises and Commencement. (Photo: Bruce M. White)

"I hope visitors will come to appreciate not only how these portraits in the room recapitulate Princeton's history by representing its founders and leaders and some of its great alumni, but also how the changing function of the space itself rehearses the institutional narrative," said Kusserow, who will also be teaching a freshman seminar in the fall titled "Charged Space: Context and Setting in the Production and Interpretation of Art and Literature," which will use the "Inner Sanctum" exhibition as a springboard to examining the power of space as art. 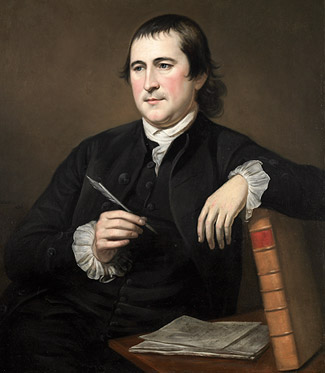 "Those intertwined histories -- the portraits and the space -- not only tell the story of Princeton, but they also mirror larger social and cultural changes in America's history," he said.

Consider, for instance, that the room originally was used as a prayer hall during the University's earliest days after Nassau Hall was constructed in 1756. For a period of time it also was used as a library and a museum before 1906, when then-University President Woodrow Wilson turned it into the Faculty Room. Modeling its layout after the British House of Commons, Wilson's vision was for a space wherein faculty members would gather to discuss everything from University policy and curriculum to broader educational theory.

"I think what's reflected in that is the changing emphasis of the University and also the world around it, from an early orientation around religion to gradually more humanistic concerns," said Kusserow. 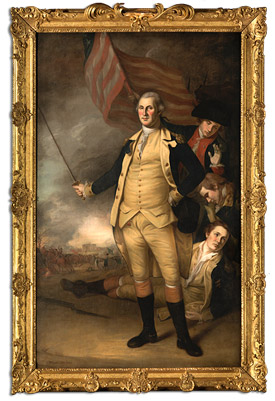 This 1784 Peale portrait, "George Washington at the Battle of Princeton," is one of the exhibition's most storied works. (Photo: Bruce M. White)

Just as Princeton's history comes across as quite multifaceted in the exhibition, so does the aesthetic quality of its Faculty Room portraits. Kusserow is quick to point out that the paintings range from "poor to sublime," adding that it's really not about aesthetics. It's about who these people were and how they functioned within the life of the University.

One example is the 1784 portrait "George Washington at the Battle of Princeton" by Charles Willson Peale, one of the exhibition's most storied works.

Leading up to the exhibition, the painting’s frame underwent a meticulous yearlong restoration by a local gilder. The 1761 frame once contained a portrait of King George II, before it was "decapitated" by a cannonball fired through one of the room's windows during the Battle of Princeton. Peale's commission was partially supported by funds bestowed by Washington himself as a gesture of his regard for the institution.

Ultimately, the portrait of current Princeton President Shirley M. Tilghman -- the University's first female president -- will hang in the Faculty Room, telling its own part of the institution's story. 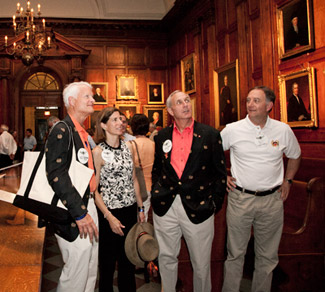 Members of Princeton's class of 1970, which funded the exhibition in honor of its 40th reunion celebration this year, view the exhibition during Reunions in May. (Photo: Denise Applewhite)

"These portraits reflect transitions in orientation, and so too the inclusion, finally, of a woman will reflect the current diversity of the University," said Kusserow. "In 50 or 100 years, people will say President Tilghman's portrait meant something about what was changing at the University. It will be a marker, not only of her tenure, but also of something much broader in the culture surrounding it."