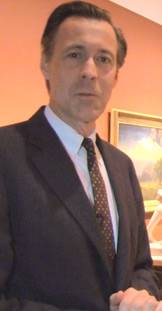 Karl Kusserow, the John Wilmerding Curator of American Art at the Princeton University Art Museum, explains the unique history of a pair of portraits of U.S. President George Washington painted by Charles Willson Peale and held in the museum's collection.

Two paintings in the American art collection at Princeton University capture the spirit of the American Revolution and the prominence of George Washington, the man who was to become the first president of the United States and whose birthday (Feb. 22) is the occasion for the Presidents Day holiday each February. Both portraits were painted by one of the most renowned early American artists, Charles Willson Peale, who lived from 1741 to 1827.

Play the "'Portraits of a President" video.

In this video, Karl Kusserow, the John Wilmerding Curator of American Art at the Princeton University Art Museum, explains the unique history of the pair of portraits and the connections they have to both Princeton and American history.

The painting depicting Washington at the battle has a story that starts with the frame that houses it. Previously, the gilt frame held a portrait of King George II, the British monarch who granted Princeton (or the College of New Jersey, as it was originally called) its charter. During the Battle of Princeton, that painting was damaged, but the frame was salvaged. Later, Peale was commissioned to paint his iconic portrait of George Washington, which — efficiently and symbolically — was placed in the same frame. The carved crown that had previously embellished the top of the elaborately decorated frame, however, was removed.

The Battle of Princeton portrait hung in Nassau Hall for more than two centuries, and now Princeton's other portrait by Peale hangs there. In the second portrayal, the context of the painting is after the battle — where, victory assured, Washington is shown leaning confidently on a captured cannon, a hero in the war for independence.