They saw vintage pink convertibles and the verdant green of a modern agricultural cooperative, crumbling blue-black theater marquees and the famous red brick and terracotta National Arts Schools in Cubanacán, the most impressive buildings erected during the Revolution. Sixteen undergraduate and graduate Princeton students spent spring break exploring the visual and literary past, present and future of Cuba as part of the course "Havana: Architecture, Literature and the Arts."

"We wanted students to understand the richness of the great cultural crossroads that is Havana, where different national and ethnic groups have left their mark," said Esther da Costa Meyer, professor of art and archaeology, who co-taught the interdisciplinary course with Michael Wood, the Charles Barnwell Straut Class of 1923 Professor of English and Comparative Literature, Emeritus.

With photos, da Costa Meyer, Wood and their students captured the experience. 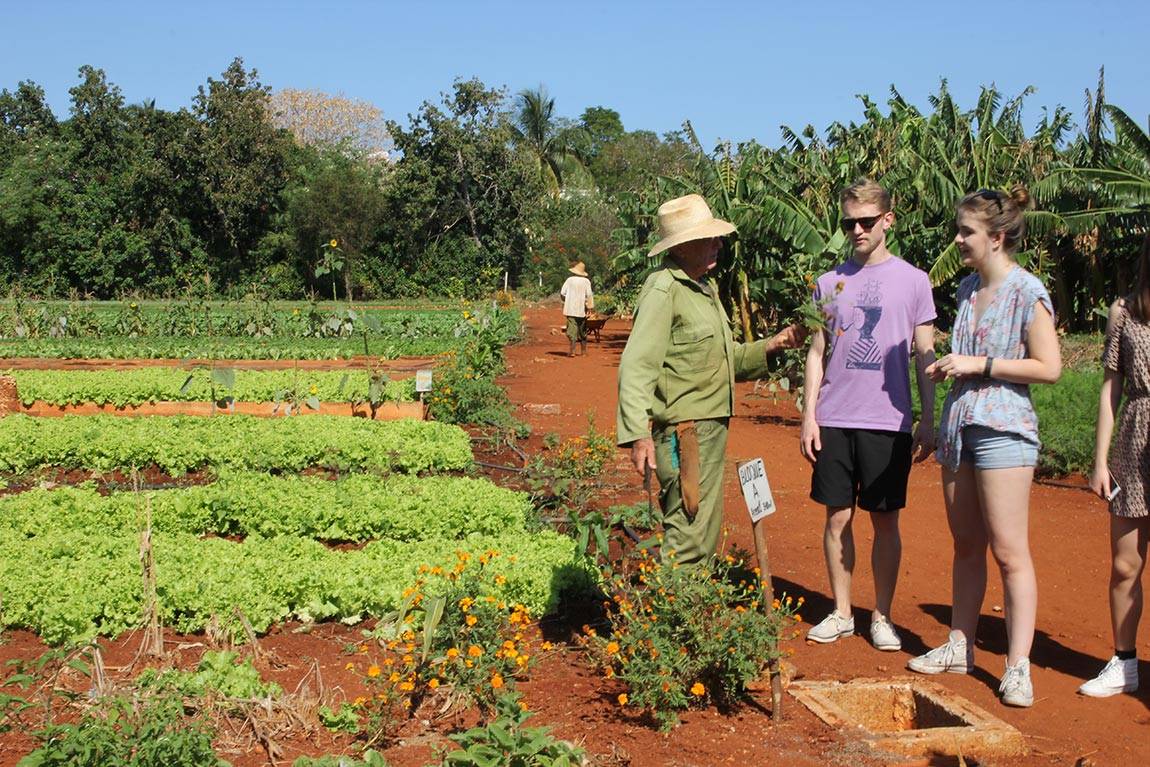 Agricultural cooperatives are a surprising part of Havana's cityscape: supplying its inhabitants with food even in periods of economic distress, they are nested between apartment blocks and worked by the people who live nearby. In Alamar, a socialist model city about half an hour outside of Havana, one of the farmers presents to our group the cooperative's many products. They range from everyday fruits and vegetables to medicinal, ornamental and spiritual herbs and flowers, and are all grown organically. (Caption by Johannes Hallermeier, Class of 2016; photo by Lily Zhang, graduate student, School of Architecture)

Through readings, films and studying the architecture in areas from the old town (Habana Vieja) dating to the Renaissance, to the modern neighborhoods of the central business district and of Vedado, the students observed cultural influences beyond Cuba's Hispanic heritage. These included traces of the diaspora of Afro-Cubans, Chinese Cubans, as well as the Sephardic and Muslim communities, da Costa Meyer said.

According to Wood, whose research interests focus on 20th-century literature and film, reading books and watching films related to Havana prior to the trip was critical to laying the groundwork for each student's experience. Readings included Leonardo Padura's novel "Havana Blue," Alejo Carpentier's "The Chase" and his essay "The City of Columns," and Wendy Guerra's "Everybody Leaves." These texts provided "a sense of streets, neighborhoods, different populations, how people get around the city," Wood said. The class also watched and discussed movies including "Godfather II," which was filmed in the Dominican Republic but "so well faked that everyone recognized the actual hotel where a lot of the Cuban action is when we drove past it," Wood said.

"There is a special pleasure in seeing in fiction and on film places and monuments and landscapes you know you're actually going to see," he said. "In a curious way they become more real in the fiction — you read the streets and the parks and the colonnades more carefully — and more imaginary in reality, because the actuality is invested, and not only by us but by others from a long way back, with what human imaginations have made of it," he said. 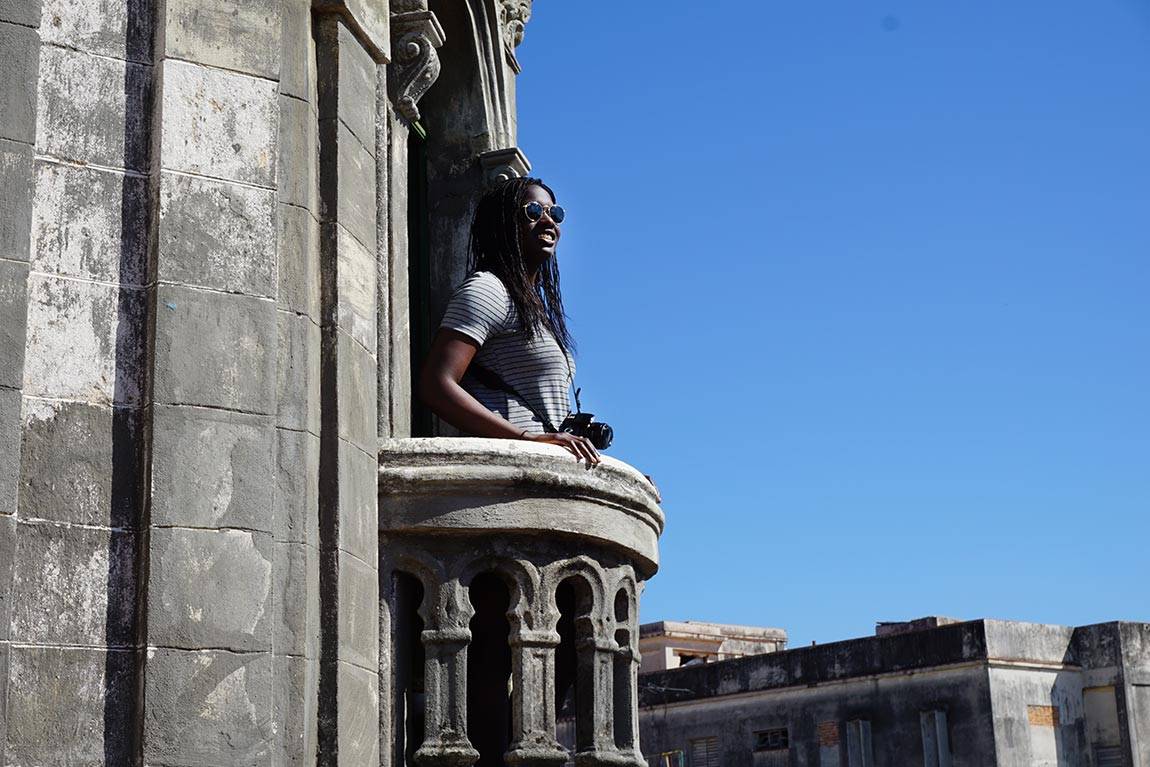 Senior Olivia Adechi surveys Havana from the stunning roof of the Hotel Raquel. The hotel itself was architecturally and culturally enchanting; the immense stained glass vault just below the terrace paid tribute to a collaboration between the city of Havana and the Sephardic community. For Olivia, the astounding week we spent in Havana was a bittersweet return to her home during her semester abroad with Princeton in Cuba. While the group benefited greatly from her indispensable experience, we also witnessed the rapid changes in the city through her eyes. While in her four months of exploring the city, she watched as buildings continued their slow descent into ruins, we saw the staggering amount of repairs attempted upon a crumbling city in anticipation of President Obama's visit. (Caption and photo by Nina Chausow, Class of 2017)

There was also a service element to the course. Da Costa Meyer said that when she takes students on a funded trip such as this one — which was sponsored by the Princeton-Mellon Initiative in Architecture, Urbanism and the Humanities; the Department of Art and Archaeology; and the Program in Latin American Studies — she asks them to volunteer in the Princeton community. To meet this directive, the students worked at the soup kitchen of the Princeton United Methodist Church on Nassau Street.

During the trip, each student also pursued a specific project ranging from exploring the practice of religion in present-day Cuba, to modern dance, Afro-Cuban music and the press coverage of the visit of President Obama — who arrived the day the group left.

While the class trip was planned months before Obama's announcement restoring diplomatic relations between the United States and Cuba and his plans to visit the island, the timing could not have been better, said da Costa Meyer. "Our students could see the efforts of both the authorities and the population to restore or repaint buildings, from major landmarks to humble residences. The excitement and the feeling of hope were palpable and contagious — the sense of history in the making," she said. 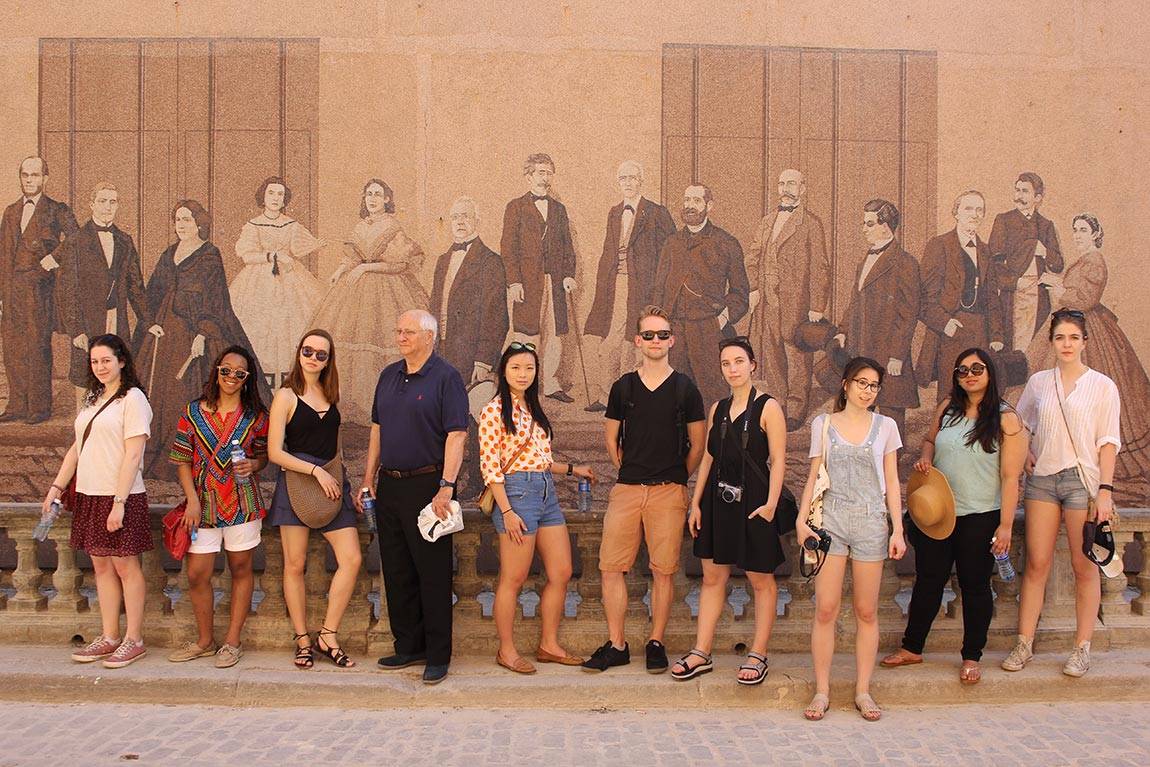 Students and Professor Michael Wood emulate the poses of important mid- to late-19th-century Havana citizens depicted in a mosaic mural on the streets of Habana Vieja. This Mercaderes Street work was painted by Andrés Carillo with the help of architect Jaime Rodríguez, sculptor Nicolás Ramo and the students of the San Alejandro Academy of Art. It follows the grand tradition of Latin American mural painting going back to Mexican muralists like Diego Rivera, who used the medium to depict the history of Mexico and Latin America more broadly from Pre-Colombian times all the way to the modern day. While today this medium is often used by the Cuban government to promote revolutionary ideals and cultural unity, it is also a popular form of broader expression used by all manner of Cubans, from students to artists. (Caption by Deirdre Ely, Class of 2017; photo by Lily Zhang, graduate student, School of Architecture) 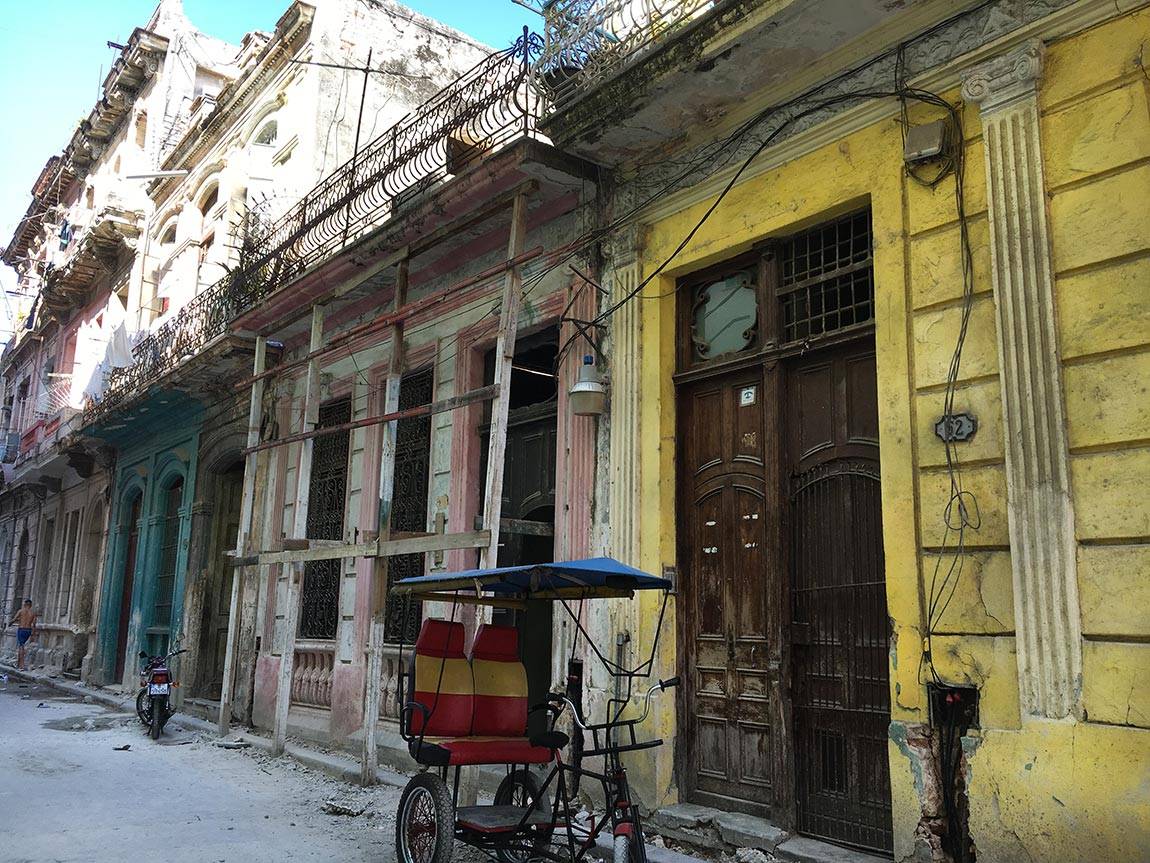 Wandering mere steps outside the immaculate, tourist-filled Plaza de la Catedral in the center of Old Havana, one finds streets much rougher around the edges, like the one seen here. Though this photograph doesn't show it, this neighborhood was bustling with Cubans and completely devoid of tourists except ourselves. Just after the picture was taken, a woman walked out of the door on the right carrying an enormous white celebratory cake to bring to friends or family. Just as one sees stark juxtapositions in Havana's streets — from the polished to the dilapidated — one also notices a hodgepodge of modes of transportation. While the city is famous for its beautifully restored and shined vintage cars, it also is filled with old pedicabs, like the one pictured here. (Caption and photo by Eliza Mott, Class of 2016) 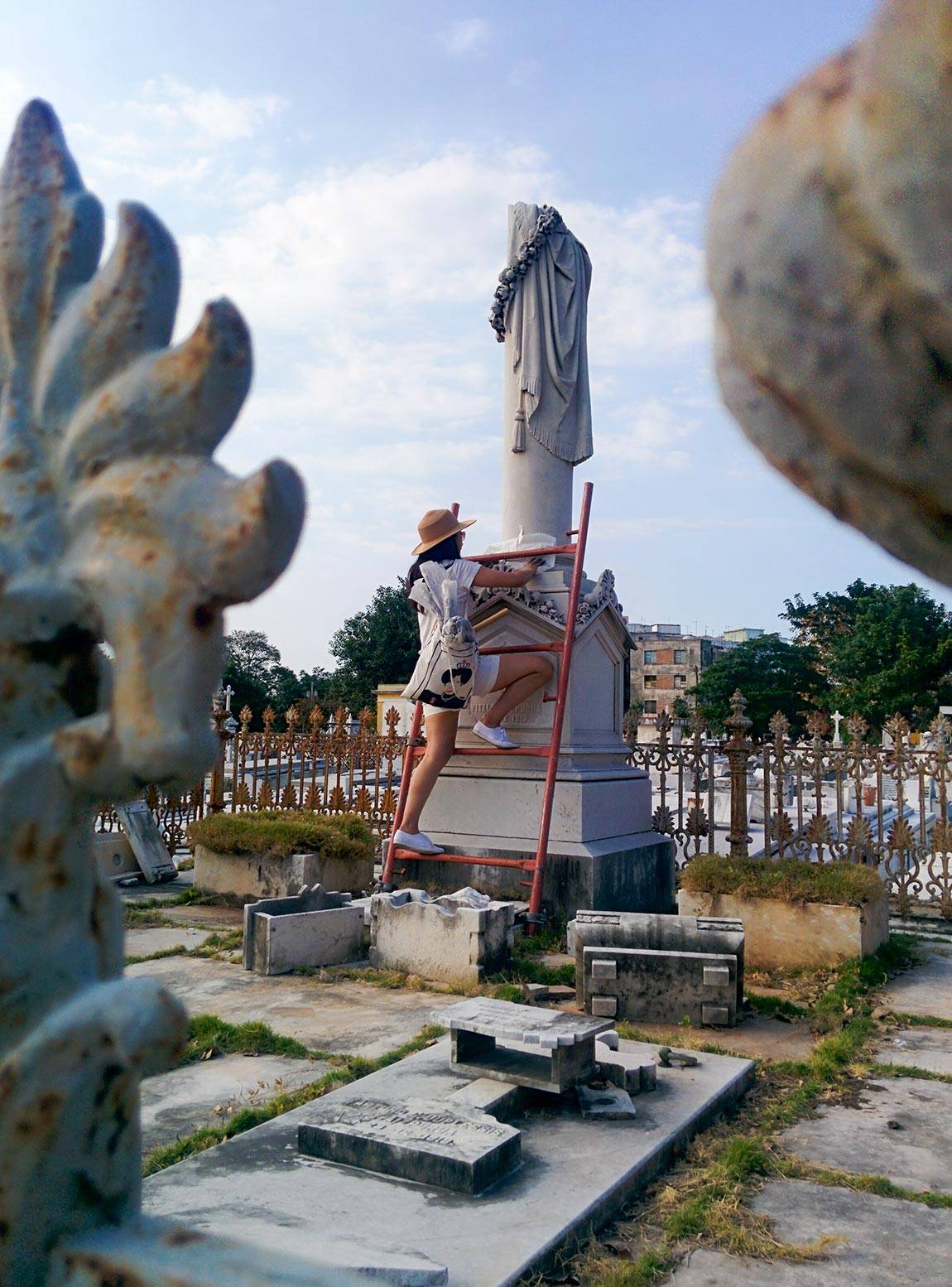 Drawing upon Alejo Carpentier's text "The City of Columns," I marked several steps of our stay in Havana through a visual inventory of columns. At the Cementerio de Cristóbal Colón, a broken column marks the burial site of a Habanero from 1917 and provides the basis for charcoal rubbings of an atypical capital, shaft and base. A seemingly infinite array of columns populates the built landscape of Havana, from the city's plazas to its historic lush interiors to the winding length of the Malecón. I studied and documented every column through various mediums and techniques, including imprint trace paper rubbings in charcoal, oil pastel, chalk and watercolor; single frame and panoramic photography; photosensitive and carbon paper; and 3-D scanning technology. Each entry of the inventory produces a translation of an existing artifact to form an entirely new and imaginary column, a trace of a trace from three dimensions into a flattened two-dimensional field. (Caption by Lily Zhang, graduate student, School of Architecture; photo by Victoria Lin, Class of 2016) 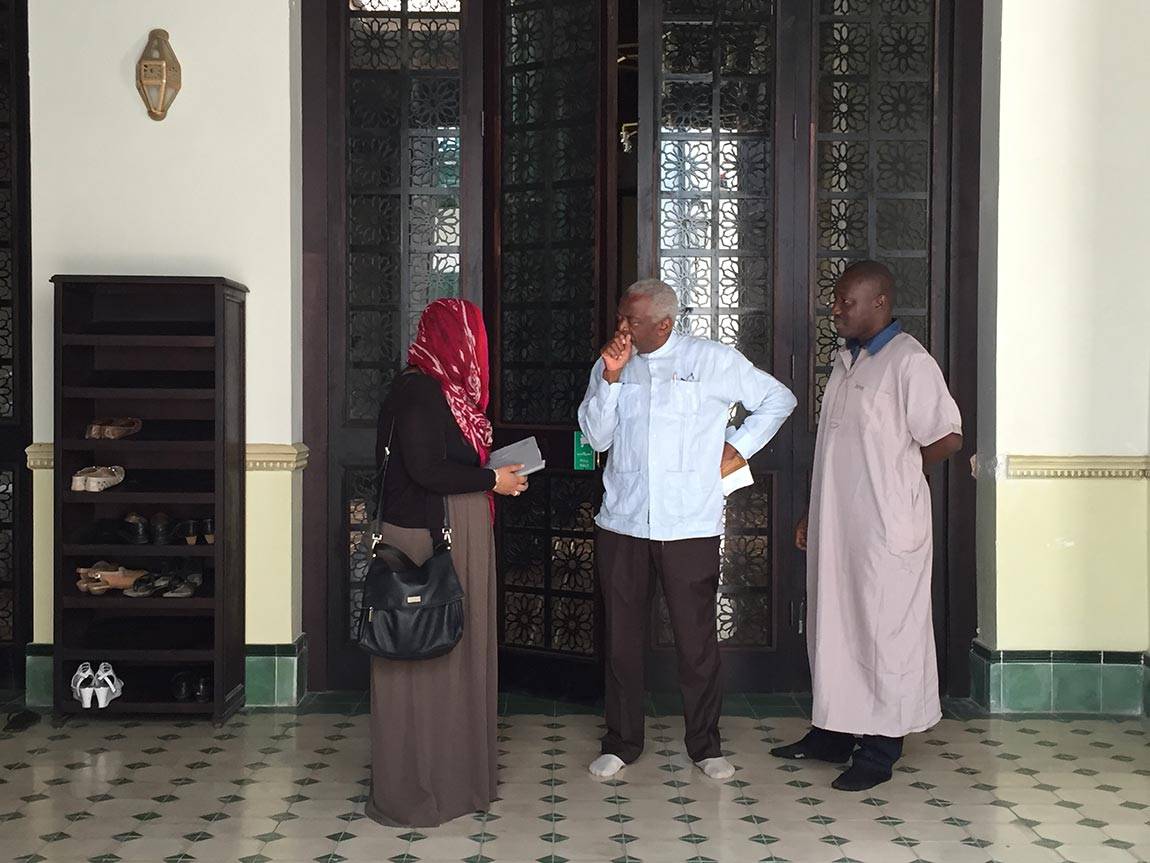 Wardah Bari, a member of the Class of 2016, interviews two members of the recently inaugurated mosque in Havana. Islam is one of the fastest growing religions in Cuba, as there are about 10,000 Muslims — many who are students, diplomats, tourists or converts. Previously housed at the historic Casa de los Árabes, the Muslim community now gathers every Friday for prayers in the mosque also located in Old Havana. The diplomatic shift in Cuba's international presence has allowed spaces for religious communities and civil society to grow in the country. (Caption by Wardah Bari, Class of 2016; photo by Esther da Costa Meyer, Department of Art and Archaeology) 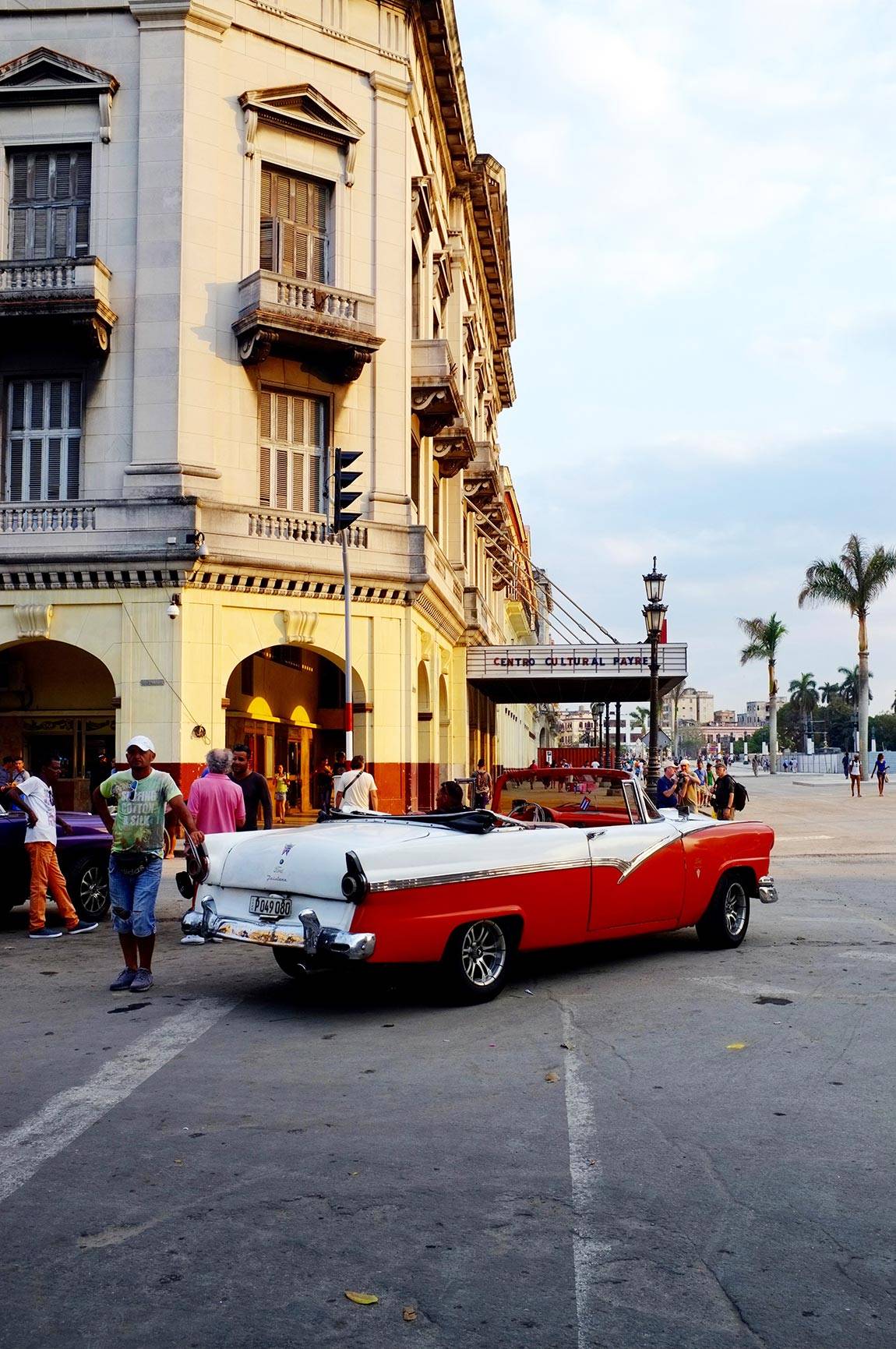 This scene of a man, a Ford Fairlane and the Payret theater is just one of many inimitable moments of a walk through Havana. The theater — a beautiful patchwork of 19th-century neoclassicism and 1950s modernism — struck me as an emblem of the city's eclectic architectural composition. Some of my favorite moments in Havana came after the day's organized activities ended, when we were free to explore for the evening. Often, I'd pick an arbitrary destination and wander, soaking in the extraordinary energy of a city that truly comes to life at twilight. (Caption and photo by Walker Carpenter, Class of 2017) 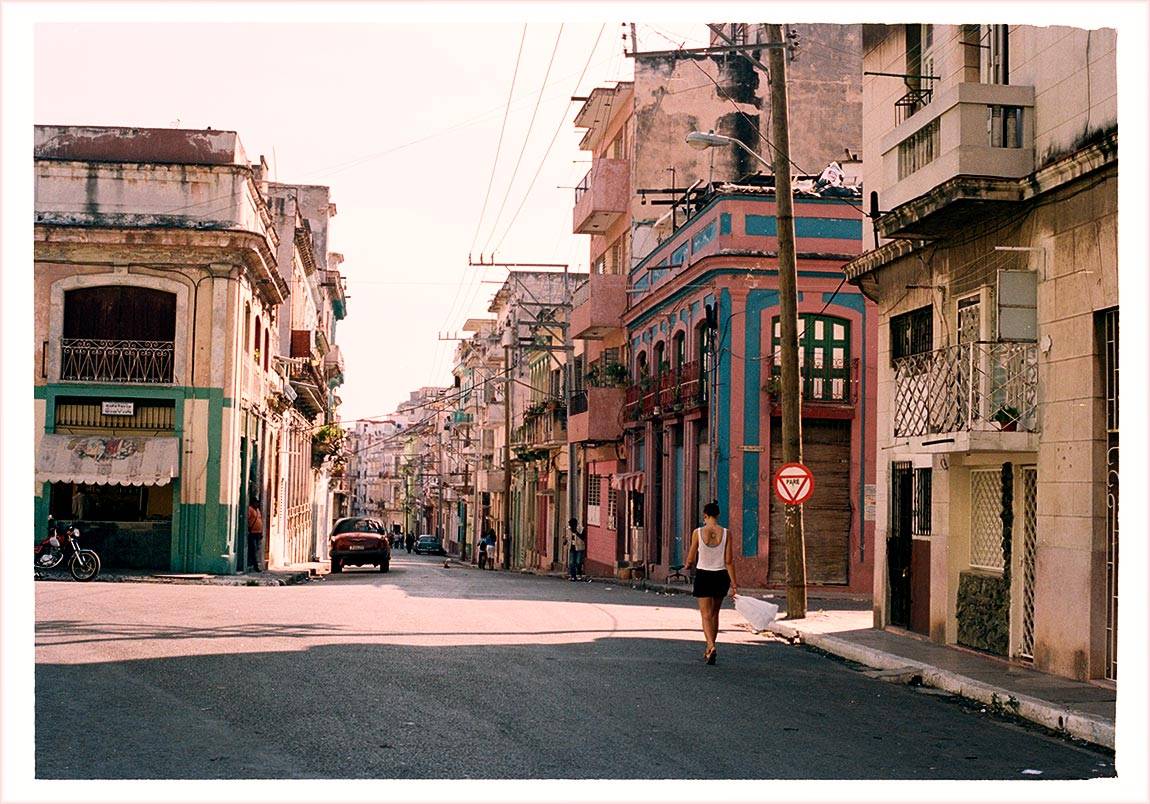 I took this photograph as we walked through Vedado. This particular street corner caught my eye as we passed; it looked like a deep portal of color, with light that stretched on and on. There is something different about each shadow, how the buildings break the light into line drawings. I wanted to remember the streets, the coral color of the buildings and the way it felt to be in that sunlight. (Caption and photo by Sydney King, Class of 2017)