Through photography that focuses on public policy, students in Princeton's Woodrow Wilson School of Public and International Affairs are able to present new dimensions to social issues around the world. Recently, three students, undergraduates Wesley (Wes) Morgan and Niklas Peters, and graduate student Elie Teichman, displayed their photography from three disparate locations in the Bernstein Gallery Annex of the Wilson School's Robertson Hall. That work is now online and includes this photo of an officer in the security agency in Afghanistan, taken by Morgan. More student work currently is on display in the gallery.

Imagine being one of the first Princeton students and one of a small number of Americans to not only visit Cuba, but actually study there for a semester.

Or envision hunkering down in the trenches with the military serving on the front lines in the wars in Iraq and Afghanistan.

Or picture working in Mongolia with government officials to reduce poverty and promote growth.

Add a passion for photography into this mix and put a camera in a student's hand, and the result can be images that look at international policy issues through a different lens. 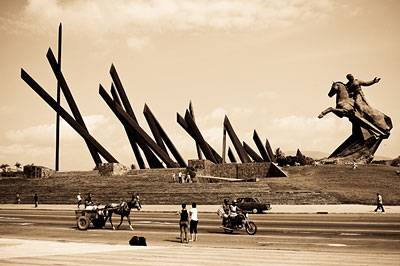 During a semester of study in Cuba, senior Niklas Peters said he had his "camera in tow trying to capture images to tell the stories" of the people he encountered. He also was struck by the images and artwork all around him that illuminated the culture and history of Cuba, such as the landmark in Santiago that depicts the Cuban hero Antonio Maceo. (Photo by Niklas Peters)

Providing such a space to reveal new dimensions of subjects learned in the classroom is the idea behind the Bernstein Gallery Annex in Robertson Hall, home of the Woodrow Wilson School of Public and International Affairs at Princeton. In this gallery, students can exhibit their photography and tell public policy stories through the use of visuals and short captions.

"There are many ways to examine, to educate and to impact public policy issues," said Christina Paxson, dean of the Wilson School. "With that age-old saying that 'a picture is worth a thousand words,' Woodrow Wilson School students are helping to frame public policy discussions through a different medium than the typical research paper. We are proud to offer them this space for their policy-related photography."

Recently, three students -- seniors Wesley (Wes) Morgan and Niklas Peters, and graduate student Elie Teichman -- used the gallery to display their photography taken in three disparate locations across the globe. All of the work currently may be viewed online. 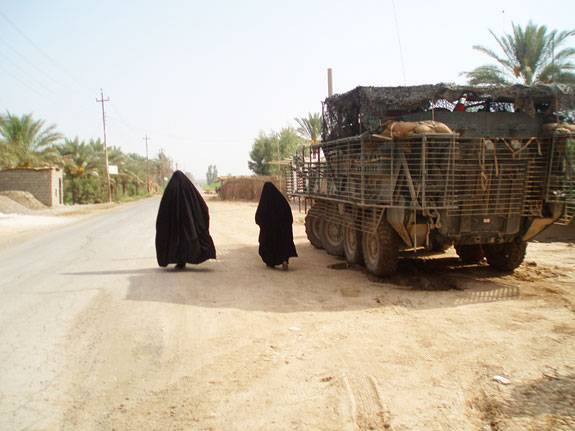 Wes Morgan captured this scene in the Mushada area north of Baghdad of women walking past a military vehicle at the height of violence in Iraq in August 2007. (Photo by Wes Morgan)

War zones in Iraq and Afghanistan

Morgan's recent exhibit, "Scenes From Downrange," is a selection of images from Iraq and Afghanistan. Morgan, a Wilson School major, has had an interest in the military since his youth. As a freshman he interviewed U.S. Army Gen. David Petraeus, a Princeton alumnus and commander of the U.S. Central Command, for the student newspaper The Daily Princetonian, which led to an opportunity to work in Iraq. While there, Morgan met The New York Times reporter Michael Gordon, who invited him to do research on a book Gordon is writing about Iraq.

Morgan's research during his two visits to Iraq in 2007-08 and two visits to Afghanistan in 2009-10 entailed being embedded with 15 American and British infantry, cavalry and Special Forces battalions. While there, he interviewed commanders and soldiers, collecting an oral history of their deployments and then sending the narratives back to Gordon. 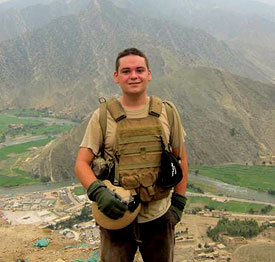 Morgan built his photo collection from two visits to Iraq and two visits to Afghanistan. Shown here in Afghanistan, he embedded with military battalions to gain an intimate look at the realities of war. (Photo courtesy of Wes Morgan)

While casually snapping pictures during his first few visits -- "photos were a side thing," he said -- Morgan became more serious about photography and its impact after meeting João Silva, a photographer for The New York Times.

"The first time I decided to make a point of the photography was in 2008," Morgan said. "I would stay at the Baghdad bureau of The New York Times, and in between embeds with the military I met Silva, who inspired me to take more pictures and be more serious about my photography."

Morgan said that the images he selected for the gallery "provide a glimpse into the lives of the soldiers, airmen and Marines who hosted me at their outposts and on other patrols over the past three years."

His photographs present a spectrum of images -- from the realities of battlefield combat with troops on patrol walking single file behind a minesweeper in mine-infested neighborhoods, to a damaged Humvee on display outside an Iraqi Army outpost, to scenes from above the battlefield as he flies in helicopters as part of both assault and rescue missions. 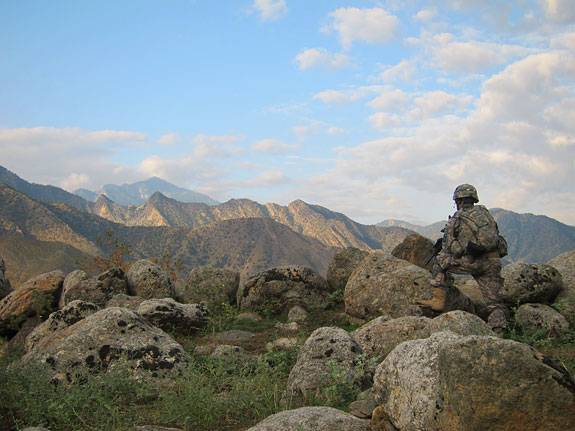 Morgan also captures the more intimate reality of war, such as images of a group of children warily watching armed soldiers on patrol in their village, a local Afghan soldier posing with a bright-eyed child in Helmand province, and Iraqi women casually walking down a war-torn village road alongside an armed and camouflaged military vehicle.

Along with these photos, Morgan's visits to Iraq and Afghanistan are leading to other creative and intellectual endeavors. His experiences also are informing his senior thesis, which focuses on counterinsurgency and counterterrorism in the Pech River Valley in Eastern Afghanistan, where many of his photos were taken. 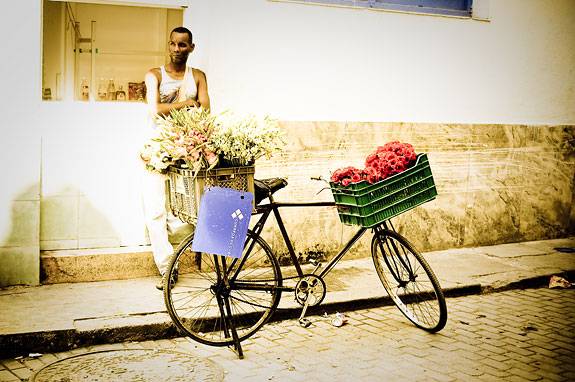 In his explorations of Havana, Peters came across a flower vendor and documented just one of the many ways ordinary Cubans try to make ends meet. (Photo by Niklas Peters)

The photographic exhibit "La Lucha Cubana: Socialism in the 21st Century" that hung in the Bernstein annex early this winter was created by Wilson School major Niklas Peters. Peters was one of nine students in the school's first study abroad program in Cuba at the University of Havana during the 2010 spring semester. Students explored the island's demography, arts and culture, with the country's politics serving as a backdrop to their educational and personal encounters. They studied alongside Cuban students and conducted research on issues regarding the future development of the Cuban population. 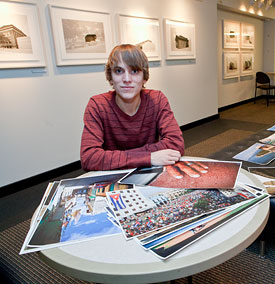 "The great thing about this program is that it allowed me to actually be in the country, on the ground, speaking to people, seeing how they live, with my camera in tow trying to capture images to tell their stories," Peters said.

"Cubans are very proud of their diversity, their ongoing revolution and especially their will to overcome hardship. You cannot go one day in Cuba without hearing about the constant lucha (struggle) that every Cuban faces," he added. "Although the concept of la lucha has changed over time to suit various political or social needs, it is still one of the most pervasive motifs in Cuban culture."

Peters' photographs capture the essence of the lives of ordinary Cubans and contrasts the extreme poverty that still exists in the country with the Cuban government's desire to move ahead with modernizations to attract more businesses and tourists. 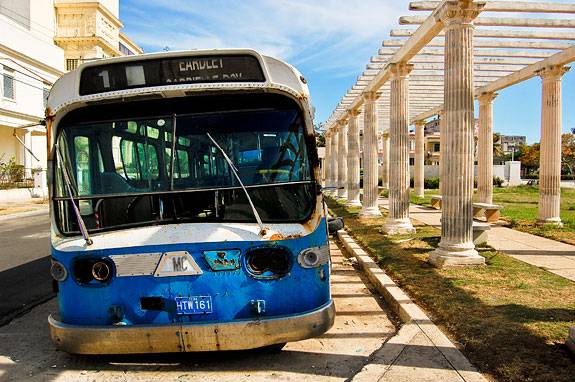 Cuba's buses captured the imagination of Peters, who noted that "the public transit network in Cuba is far beyond its intended capacity." He explained, "Because most Cubans are not allowed to own cars, they spend much of their time waiting for a bus to get from place to place, with no guarantee that the bus will arrive within a reasonable amount of time, if at all." (Photo by Niklas Peters)

His image subjects include painted propaganda murals with slogans dating back to the 1960s and the anniversary parade through Havana's streets in reaction to the Bay of Pigs Invasion. These are contrasted with reminders of everyday Cuban life, with pictures of a modern foreign tourist hotel towering over the crumbling buildings inhabited by Cubans; antiquated communications and transit options; and an abandoned Hershey Chocolate Corp. building outside of Havana, taken over during the revolution in 1959.

Peters also shows signs of promise and enthusiasm in the country, such as restoration efforts to beautify key areas of old Havana, the Cubans' love of baseball, and cultural performances by ordinary Cubans for the increasing number of tourists.

"My experiences and interactions in Cuba give me hope that Cubans can surmount the challenge of forging a new comprehensive '21st-century socialism' that faces economic realities while not abandoning their admirable values," Peters said. 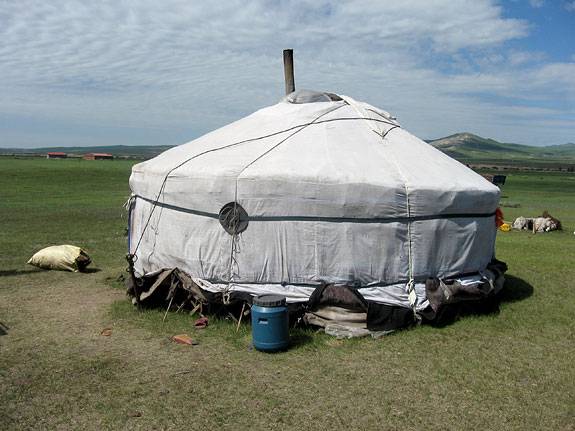 In his photographic study titled "Land Use Reform in Nomadic Mongolia," Elie Teichman captured scenes that show how the land is being used, such as for agriculture and herding, as well as for habitat, as shown by this image of a traditional yurt. (Photo by Elie Teichman)

Considering himself an amateur and not as passionate about photography as Morgan and Peters, Elie Teichman, a master in public affairs candidate, used a basic point-and-shoot camera as he sought to capture images to "remember special people and experiences" while working with the Millennium Challenge Corporation (MCC) to fulfill his summer internship degree requirement in Ulaanbaatar, Mongolia. During his almost 13 weeks there, from June-August 2010, he created a series of visuals with the title "Land Use Reform in Nomadic Mongolia," which hung in the gallery annex through mid February. 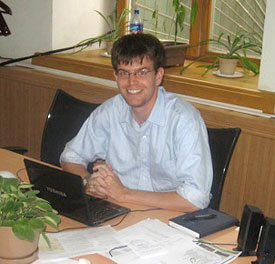 Teichman, a master in public affairs candidate, used a "basic point-and-shoot camera" during his internship in Mongolia to capture images to "remember special people and experiences." (Photo courtesy of Elie Teichman)

"Overgrazing and private land leasing are key issues facing the Mongolian people, and this internship provided a special opportunity to both contribute to a crucial project while also learning more about the culture and history of this unique people," Teichman said.

Teichman's photographs help tell the story of efforts under way in Mongolia's predominantly agricultural and herding economy, where animals outnumber people by a ratio of 10 to 1, to transition from the overgrazing of land to managing land resources in a more sustainable and productive manner. Teichman uses his lens to highlight many of the challenges facing the herding population of Mongolia as they adapt to the need to increase production for expanding markets in growing urban areas, while also ensuring that their lands remain fruitful for decades to come.

His images and the narrative he shares have caught the attention of the MCC, which links to Teichman's photographs from its own website, using the collection as an example of how to tell the story about their own projects.

"Elie's photos highlight the important work that interns can contribute to the MCC by calling attention to the agency's efforts to reduce poverty through economic growth," said Robert Reid, the resident country director for MCC Mongolia. 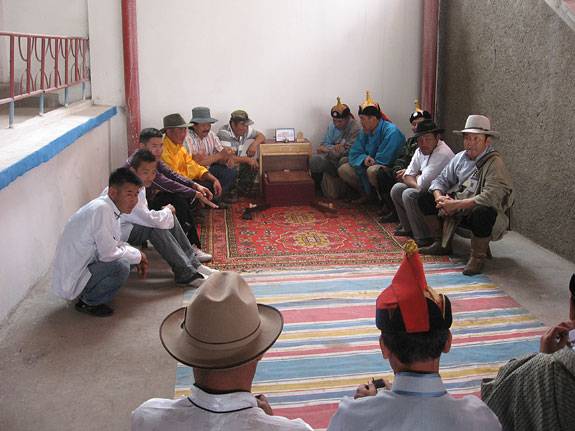 Teichman used his lens to highlight many of the challenges facing the herding population of Mongolia, and the inhabitants who gather to discuss those concerns, as they adapt to the need to increase production for expanding markets in growing urban areas, while also ensuring that their lands remain fruitful for decades to come. (Photo by Elie Teichman)

Teichman said his work in Mongolia has reinforced his interest in international development, and he hopes to work for the MCC after he completes his degree.

Further exhibits are planned for this academic year, enabling more students to present images they have captured up-close, and bringing a valuable new dimension to how policy issues are viewed and debated.

"The images captured by these students portray an ever-changing international scene and the policy issues confronting the leaders of both today and tomorrow," said Paxson. "It is my hope that these exhibits will encourage more students to share their visual images with the Princeton community."