Nine Princeton students spent the spring 2010 semester studying and living in a society that largely has been off-limits to Americans for the past 50 years.

In Princeton's first semester-long program in Cuba, students explored the island's demography, arts and culture, with the country's politics serving as a backdrop to their educational and personal encounters. The students, all juniors and majors in the Woodrow Wilson School of Public and International Affairs, took one course taught by a Princeton instructor, "Arts and Cultural Policy in Contemporary Cuba," and participated in a task force on "Population and Development," led by University of Havana researchers.

Each student also enrolled in three courses taught in Spanish at the University of Havana with Cuban students. Political sociology, Cuban history, Cuban cinema and Spanish language courses were among the courses they selected. 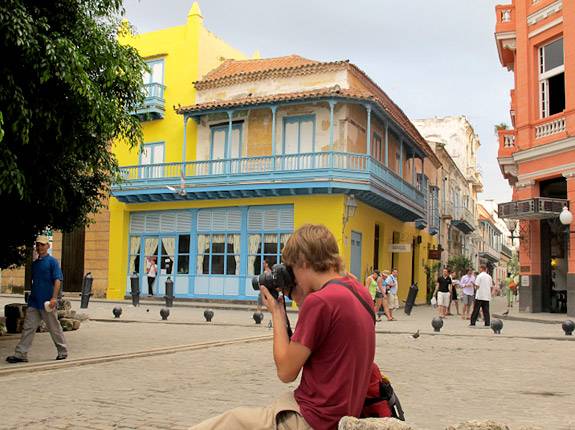 "I was very intrigued by the idea of studying in one of the only places in the world where I would not normally be allowed to travel," said Julia Kaplan. "I have learned what it is like to live in a developing, socialist country that has very strained relations with my own country. And … I have learned to question many things that I once took for granted about everything, from the personal to the political."

One of the students' main challenges was familiarizing themselves with the Marxist philosophy that serves as a foundation to Cuban society.

"What I did not expect was the difficulty I have had speculating and making inferences within the Cuban context," said Bryan Locascio. "For example, I can give a definition of 'civil society' as it applies to most of the rest of the world, but identifying it in the Cuban case is more difficult."

Said Kaplan, "I'm excited to see how this exposure to a completely different analytical lens will inform our academic experiences at Princeton next year."

The Woodrow Wilson School requires enrollment in policy task forces both semesters of the junior year, with six task forces offered abroad each year. As part of the task force, students must write individual papers on public policy issues, then pool their ideas in a group policy statement. Each task force's findings are presented to individuals, government agencies or other organizations involved in policy issues.

In 2008, Wilson School professors Stanley Katz and Nathan Scovronick approached the University about holding a task force in Cuba.

"It's an unusual opportunity to live in a communist country and to see what that constantly diminishing part of the world is like," said Katz, a lecturer with the rank of professor in public and international affairs, who has been visiting Cuba since 1997 to promote academic exchanges. "If you're going to understand world history in the second half of the 20th century, you need to do that, and these students are going to have a unique understanding."

In December 2008, Katz and Scovronick traveled to Havana with Senior Associate Dean of the College Nancy Kanach, who directs the Office of International Programs, to speak to administrators at the University of Havana, select faculty for the task force and research other logistics. They also appointed Shanti Pillai as a lecturer in public and international affairs in the Wilson School to teach the arts and culture policy course and serve as a resident director for the students in Cuba.

Over the next year, they worked on the students' travel, living and educational arrangements, which were complicated by U.S. and Cuban government policies, Kanach said. For instance, the students had to travel to Havana via charter plane from Miami because U.S. travel to Cuba is heavily restricted, and managing the finances of the program was complicated since U.S. credit cards are not accepted in Cuba.

After students applied and gained acceptance to the program in fall 2009, Pillai suggested readings, provided a handbook and held several on-campus meetings to prepare students for their semester abroad.

While in Cuba, the policy task force was housed in the University of Havana's Center for Demographic Studies (known as CEDEM). The leader was CEDEM demographer Antonio Aja Díaz, a Cuban native who spent spring 2002 at Princeton as a visiting fellow through the Program in Urbanization and Migration in the Office of Population Research. Each meeting of the task force was led by a different member of CEDEM, introducing students to specialists in a wide range of topics such as race, gender and aging.

"The task force on demography has been a wonderful opportunity to view some of the revolutionary government's more notable accomplishments -- the drop in infant mortality, surge in literacy rates and the growth in life expectancy -- while attaining a realistic and multifaceted view of the challenges confronting the country as it moves forward," Locascio said.

The students were paired with a faculty member who shares their research interests; for example, Kaplan wrote her task force paper on gender roles, the status of women in Cuban society and demographic trends, and she was guided by a researcher, Tayli López Tutusaus, who studies female participation in the Cuban economy.

Kaplan said López helped her gain access to the resources she needed for her research, such as journal articles, interview contacts and information about relevant libraries around Havana. "I think it would be almost impossible to conduct an independent research project of this magnitude in Cuba without this guidance," she said.

One of the biggest challenges for students was their intermittent Internet access, both for research and personal use. The students had to leave their lodgings -- the guesthouse of the Federation of Cuban Women -- and pay for costly Internet access at a hotel, Kaplan said.

The students' task force recommendations were presented to the United Nations Population Fund in Cuba. Each student made a series of recommendations on the issues he or she explored during the semester, in some cases offering suggestions for refining existing policies based on new research and in other cases proposing new approaches or guidance for further research.

Pillai's arts and cultural policy course examined the Cuban government's goals of literacy, cultural democracy and patronage through the creation, promotion and consumption of arts and culture -- such as architecture, film, music, sports, theater and visual arts.

The class gave students insight into the arts through firsthand experiences.

"The Cuban government invests a lot in the arts, and as a result, the country has a much richer arts culture than I could have ever expected," said Chi Anunwa. "We've sat in on rehearsals for a few major dance companies in Cuba, my favorite being Cuba's national contemporary dance company."

The course incorporated visits to artists' groups, festivals, museums and galleries, and historic neighborhoods, and also discussions with dancers, photographers, film directors, academics and others involved in cultural policy and production. Pillai, who previously directed Sarah Lawrence College's Havana semester program, also took students on a week-long trip to Baracoa and Santiago on the eastern end of the island.

"The visits encourage students to see the things they read about and to draw their own conclusions," Pillai said. "By coming into contact with intellectuals and artists, they begin to have a sense of the range of perspectives here and how people see themselves."

Scovronick, a lecturer in public and international affairs and director of the Wilson School's undergraduate program, said that the students also learned a great deal about the daily lives of Cubans.

"We knew that Havana had a vibrant cultural scene that attracted many young people. We thought that familiarity with it would greatly add to our students' experience and increase their contact with Cubans," he said.

Locascio said that although he enjoyed these personal encounters, they were often tense due to the U.S. embargo of Cuba and other political grievances.

"Nowhere else I've traveled have I been so conscious of my U.S. citizenship as I am here," Locascio said.

The University plans to offer the semester program again next spring, Kanach said. The students who studied in Cuba this spring appreciated "the opportunity that few U.S. citizens have to live and study in a country that is so close yet so far from the U.S.," she said. "We are sure this is a semester that they will remember and cherish for a long time come."