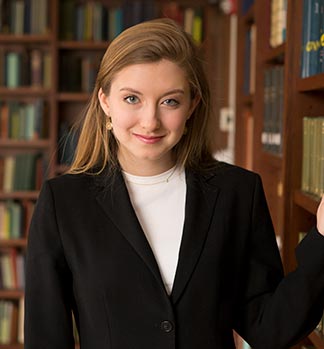 Gold, of New York City, is a concentrator in classics and is also pursuing certificates in Hellenic studies, values and public life, and humanistic studies. Her academic honors include the Department of Classics' Charles A. Steele Prize and Harland Prize. In summer 2015, she was awarded a Stanley J. Seeger Summer Fellowship for study in Greece. In summer 2016, she studied in Rome through a program of the Paideia Institute for Humanistic Study.

After graduation, she plans to continue her study of classics and ancient philosophy and hopes to become a classics professor and a public intellectual.

Her senior thesis looks at theatrical language and imagery in the writings of St. Augustine and his Neoplatonic predecessor Plotinus.

"According to Plotinus, we are all actors on a world-stage, performing a play that is scripted by divine providence," said Gold, who attributes her interest in philosophy and theater to her grandfather, a theologian, and her father, a playwright. "Exploring the world-stage metaphor allows us to address questions of moral responsibility, aesthetics and free will — questions we still wrestle with today."

"It is a manifest fact that Solveig has accomplished the highest academic standing in her chosen field, classics, which is a fiendishly difficult humanities major," said Christian Wildberg, professor of classics and director of the Program in Hellenic Studies. "She has also demonstrated, in her many extracurricular activities on campus, an exceptional kind of support for the benefit of her alma mater. In fact, her support, engagement and creativity border on devotion to this institution.

"I never witnessed such a potent combination of grace, intelligence, intellectual independence, well-thought-out views and the ability to articulate them beautifully — all of this presented consistently with a disarming and refreshing combination of wit, humor and impressive self-confidence," Wildberg said. "In my 20 years teaching at Princeton, I have not seen a more well-rounded and promising senior."

At Princeton, Gold is a member of the Edwards Collective — a group of approximately 35 students who celebrate the humanities and creative arts and live together in a residential community at Mathey College. She also serves as a guide with Orange Key Tours, giving campus tours to prospective students and visitors; a staff writer for the Princeton Tory; and co-founder of the Princeton Open Campus Coalition. In spring 2016, she directed and played the title role in a production of Euripedes' "Medea," performed in Greek in Princeton's Chancellor Green Rotunda.

"I am so grateful to be honored by the institution that has challenged, inspired and emboldened me at every turn," she said. "This award is particularly meaningful to me because it bears the name of Moses Taylor Pyne, who, by founding the Princeton Alumni Association, ensured that the Princeton community lasts a lifetime. As I say at the conclusion of every Orange Key tour, I am so proud to be a Princetonian not just for these four years, but for the rest of my life, and today, I am prouder than ever." 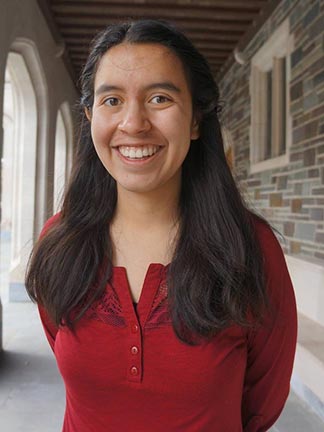 Salazar, who was home-schooled in Las Cruces, New Mexico, is a chemistry major. Her academic honors include the Department of Chemistry's William Foster Memorial Prize, given to the junior in the department with the highest departmental academic record; and the George B. Wood Legacy Prize, awarded in recognition of exceptional academic achievement during the junior year.

After graduation, she plans to attend medical school and hopes to focus on providing access to medically underserved populations in the United States, particularly Spanish speakers, and ultimately to work in global health.

A second-generation immigrant whose grandparents moved to New Mexico when her father was a child, Salazar said that no one in her community left the area to go to college and that she expected to go to a state school where generous scholarships were available. Internet searches and support from her teachers led her to apply to Princeton. "I never imagined I would come to a university like Princeton, much less that I could thrive here and give back to the community," she said. "I applied to Princeton largely due to its quality education and its financial aid program."

Winning the Pyne Prize, she said, "reminds me how many others have contributed to my time here and deserve recognition. First and foremost, I am overwhelmed by the goodness of God in providing me these opportunities and carrying me through the challenges. I am also extremely grateful for the unending support of my family and friends at home, who have kept me sane and humble, and also for the faithfulness and support of my friends, professors, mentors and those I've had the privilege to mentor here at Princeton. This award honors them as well as me."

For her senior thesis, Salazar is exploring new ways of using visible light to convert racemic mixtures of chiral molecules to single enantiomers — in other words, changing a chemical from a 50/50 mixture of two geometrical configurations to only one of those configurations. Because most medicines are chiral molecules and need to be made with a particular configuration, said Salazar, this would have applications in the synthesis of new medicines and agrochemicals.

Robert Knowles, assistant professor of chemistry and Salazar's thesis adviser, noted her remarkable work ethic. "Marisa is fantastic and is among the most intelligent, motivated and talented students that I have interacted with during my time at Princeton. I often see her in the lab at nights and on weekends, working hard to get the next good result. She is an excellent scientist, dedicated and driven. She represents all the best attributes of our university," he said.

Salazar is a member of Whitman College, where she is an undergraduate assistant and peer academic adviser this year, and has served as a residential college adviser and Princeton Preview captain. She also is a pre-health peer adviser, advising students who are interested in health careers; head tutor for organic chemistry with the McGraw Center for Teaching and Learning; a member of the Princeton Evangelical Fellowship; and an undergraduate conversation partner in the English Conversation Partner Program. She also was an officer with the Princeton University American Sign Language Club.

Salazar spent the summer after her sophomore year participating in Princeton's International Internship Program, traveling to Bolivia to learn about the country's health care system and serve as a volunteer tutor. In summer 2016, she served as a volunteer at the Mountain View Regional Medical Center in Las Cruces.