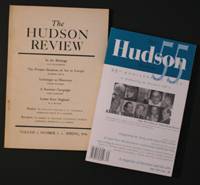 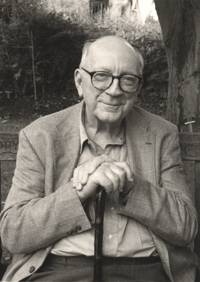 Frederick Morgan, a 1943 Princeton alumnus, edited The Hudson Review for half a century. (Photo: Gaylen Morgan) 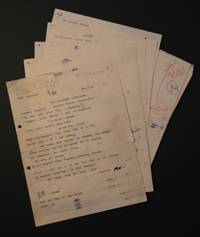 The archives include Ezra Pound's typescripts for "Cantos 86," which show the author's own corrections along with those made by editor Frederick Morgan. (Photo: Denise Applewhite)

The archives of The Hudson Review, one of the most distinguished and influential American literary magazines, will permanently reside in the Princeton University Library.

Paula Deitz, editor of the quarterly publication, has chosen the library's Department of Rare Books and Special Collections to house the archives, which include hundreds of cartons filled with authors' files, corrected manuscripts and other original materials documenting the history of the magazine from its founding in 1948 to the present.

"The extensive correspondence files alone hold immense research value for generations of literary scholars," said Don Skemer, curator of manuscripts in the library. "This is one of our most significant acquisitions in decades."

The Hudson Review was founded in New York City by three Princeton graduates -- Frederick Morgan '43, Joseph D. Bennett '43 and William Arrowsmith '45 -- who had studied creative writing with the poet and critic Allen Tate and worked on the Nassau Literary Magazine. Their intent was to create a "little magazine" dedicated to publishing good poetry and prose, including short fiction, criticism and other works of renowned and unknown writers.

The founders took pride in judging contributions on the basis of their individual merits and not being bound by any ideology. In introducing the first issue in 1948, the editors declared that the magazine "must alike condemn the opportunism that seizes upon the ephemera of a culture, and the pedantry that would starve its roots."

The magazine has grown to serve as a major forum for the work of new writers and for the exploration of new developments in literature and the arts. It has a distinguished record of publishing little-known or undiscovered writers, many of whom have become major literary figures.

Joyce Carol Oates, the Roger S. Berlind '52 Professor in the Humanities at Princeton, recently observed: "Like the Paris Review, Antaeus and Kenyon Review, and very few others, Hudson Review is a literary magazine that has helped to shape American literature of the 20th century."

Morgan, who died in 2004, guided The Hudson Review for its first decades, stepping down on its 50th anniversary in 1998. He was succeeded by Deitz, who was his wife.

"Since the idea for The Hudson Review originated in Allen Tate's creative writing classes at Princeton with his pronouncement, 'You boys should start your own literary magazine,' we believe that the journal's history has come full circle now that its 58-year archive and Frederick Morgan's papers have returned home, as it were, to the Princeton library," said Deitz. "I am gratified by the wealth of material already in Princeton's manuscript collection that both complements The Hudson Review's holdings and relates to Fred's early literary life."

Particularly important, according to Skemer, are The Hudson Review files pertaining to Ezra Pound during the 1950s. The files include Pound's corrected typescripts for "Cantos 85-89" and "Cantos 96-97," a corrected typescript of his translation of Sophocles' "Women of Trachis" and 215 letters, notes and cards written by Pound, mainly to Morgan, from the late 1940s to the late 1950s.

As Morgan recalled in a 1998 interview, "Unlike Allen Tate, Ezra Pound was a hectoring kind of would-be mentor. He wanted to tell me exactly what to do issue by issue. For quite a while after the first meeting [in 1950] he wrote me two or three letters a week, giving me instructions."

Complementing the archives of The Hudson Review are Morgan's own papers, which contain his manuscripts and drafts, journals and commonplace books, personal correspondence and other materials. Many of the letters he received are from authors whose work was published in The Hudson Review, including Hayden Carruth, Herbert Gold, Anthony Hecht, Joyce Carol Oates, Louis Simpson and Charles Tomlinson. A well-known American poet in his own right, Morgan was the author of many published works, including: "A Book of Change" (1971); "Poems of the Two Worlds" (1977); "Death Mother and Other Poems" (1979); "Northbook: Poems" (1982); "Poems: New and Selected" (1987); and "The One Abiding" (2003).

The archives of The Hudson Review join the distinguished research holdings on publishing history in the Princeton University Library. These collections are especially rich in American materials, including the archives of Charles Scribner's Sons, with files on F. Scott Fitzgerald, Ernest Hemingway, Edith Wharton, Thomas Wolfe and some 2,500 other authors. Largely complete as well are the archives of Henry Holt & Co., John Day Co., Derrydale Press, Story and the Quarterly Review of Literature.

Also at Princeton are selected archives of Doubleday, Harper & Brothers, G.P. Putnam and Princeton University Press. These are supplemented by the records of literary agencies such as Harold Ober Associates, the papers of prominent literary editors such as Saxe Commins (Random House) and Harold Loeb (Broom), and the papers of major modern authors such as Sylvia Beach, James Gould Cozzens and F. Scott and Zelda Fitzgerald.

The acquisition of The Hudson Review archives and Morgan papers was made possible in part by the Richard M. Ludwig Endowment, established in 2001 by Michael Spence, a member of the class of 1966, and Monica Spence. It is anticipated that the archives and papers will be fully organized and ready for researchers by summer 2007.