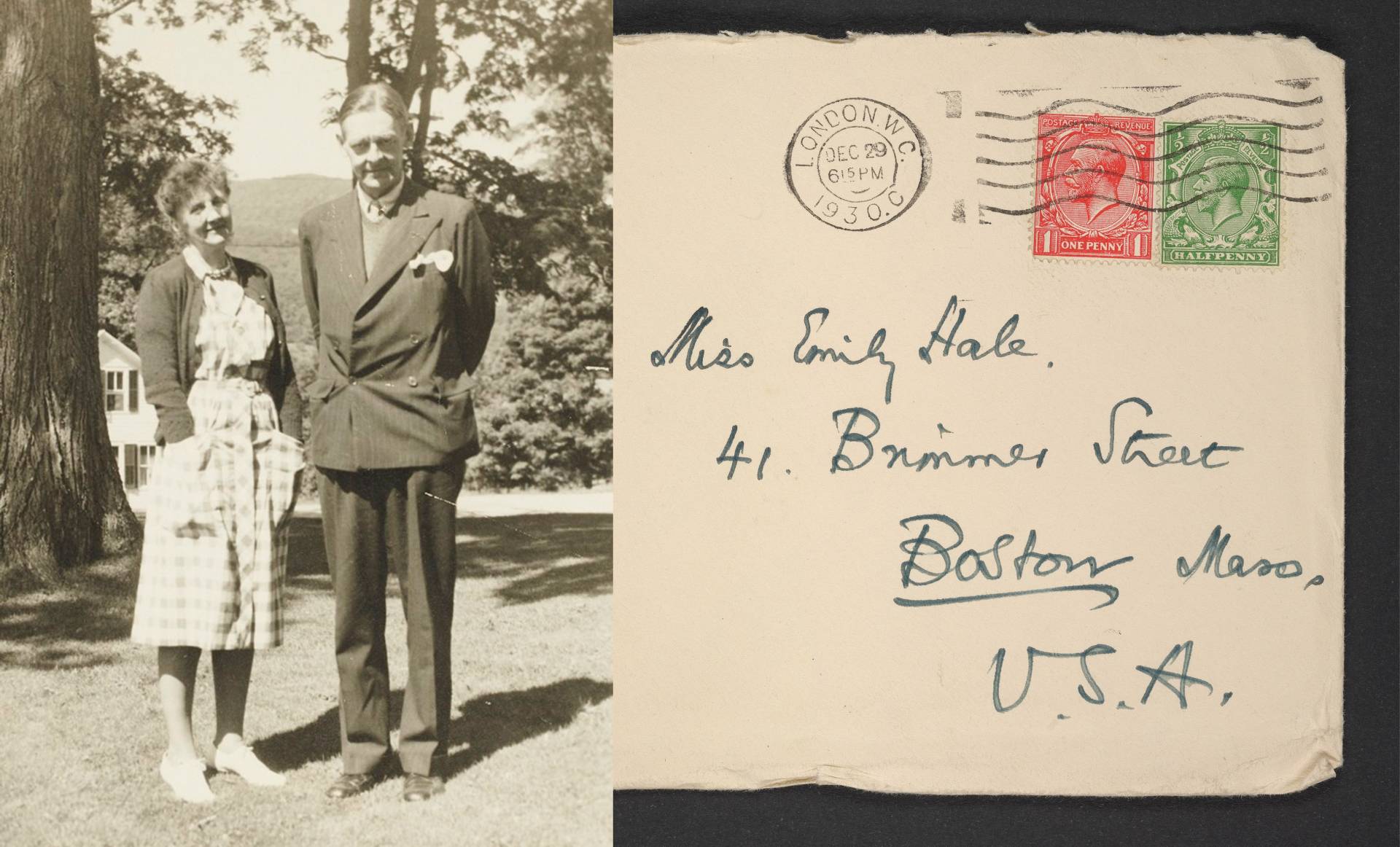 Left: Nobel laureate T.S. Eliot and Emily Hale in Dorset, Vermont, during summer 1946. Right: An envelope addressed to Emily Hale at 41 Brimmer Street in Boston handwritten by Eliot. The envelope is part of a collection of Eliot's letters to Hale that will be available starting Jan. 2 at the Princeton University Library.

On Jan. 2, 2020, a collection of 1,131 letters from Nobel laureate and renowned writer Thomas Stearns Eliot, better known as T.S. Eliot, to his lifelong friend Emily Hale will open for research at Princeton University Library. Dating from 1930 to 1957, the letters are the largest single series of Eliot’s correspondence and among the best-known sealed literary archives in the world.

Hale donated the letters to the Princeton University Library (PUL) more than 60 years ago. She gave the letters with the stipulation that they remain sealed until 50 years after the death of Eliot or Hale, whoever survived the other. Eliot died in 1965 and Hale soon thereafter, in 1969.

“The approaching release of T.S. Eliot’s letters to Emily Hale is already generating excitement on campus,” said Joshua Kotin, associate professor of English at Princeton. “Students who have been fascinated by ‘The Love Song of J. Alfred Prufrock’ (1915) and ‘The Waste Land’ (1922) are now asking questions about Eliot himself. But this interest is not limited to Eliot’s love life. Students are excited to learn more about Eliot’s religious conversion and attitudes toward women, and about his decisions at Faber & Faber and their impact on British culture.”

In the letters, scholars and Eliot fans alike will likely learn more about his relationship with Hale, who has been described as his muse and confidant; his personal and professional experiences as a writer, critic and editor at Faber & Faber and The Criterion; and his overall thoughts regarding the contemporary literary scene.

Hale’s donated collection also included photographs, ephemera, clippings and a brief narrative she wrote about her relationship with Eliot. After the collection opens in January, scholars and librarians will be able to delve into and share more information about the content. 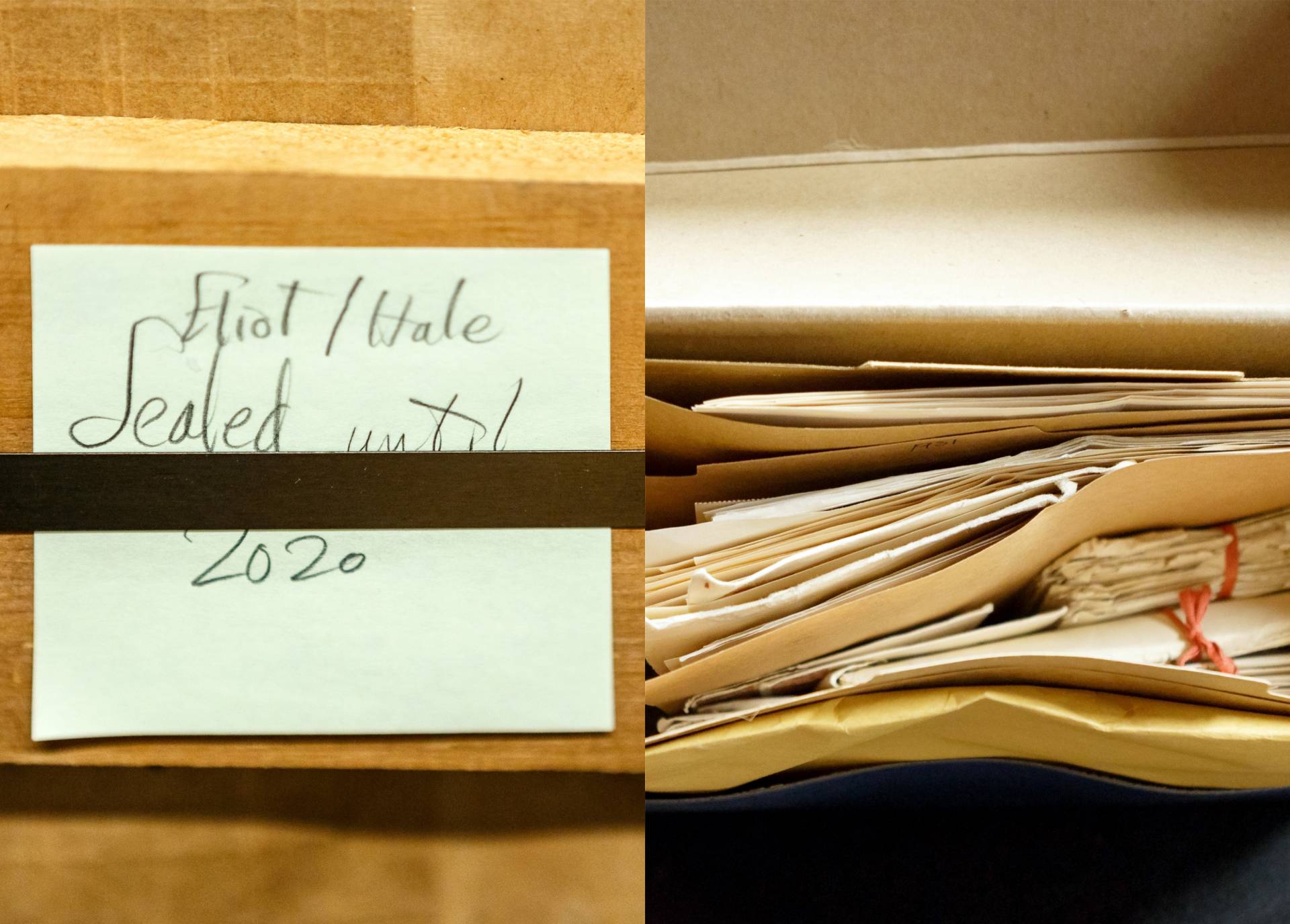 Romantic speculation has surrounded the Eliot and Hale relationship over the last few decades, inspiring novels such as Martha Cooley’s “The Archivist” and Steven Carroll’s “Eliot Quartet” series. Such speculation has added to the literary and academic curiosity about the content of the letters.

A Boston native, Hale was a speech and drama teacher at Simmons College, Milwaukee-Downer College, Scripps College and Smith College. She and Eliot initially met in Cambridge, Massachusetts, in 1912 when Eliot attended Harvard University, and they rekindled their friendship in 1927. When Eliot moved abroad to England, the pair corresponded frequently.

When the collection was initially unsealed at PUL in October for processing and cataloging, the letters were still in their original envelopes and bundles, as Hale presumably kept them, according to Chloe Pfendler, processing archivist for the manuscripts division in PUL’s Special Collections.

Susan Stewart, the Avalon Foundation University Professor in the Humanities and professor of English at Princeton and editor of the Princeton Series of Contemporary Poets, was there when the letters were unsealed by PUL staff.

“On the afternoon of Oct. 14, before a small audience gathered in the [Special Collections] seminar room, the Princeton librarians Don Skemer and John Logan stood behind a table full of wooden crates wielding dual pairs of tin snips. They proceeded in tandem to snap the copper bands holding the crates and the wooden slats clattered to the table. Revealed at last were the letter boxes that held the answers to one of the most intriguing mysteries of modernism: Princeton’s trove of more than a thousand letters sent by T.S. Eliot to Emily Hale between 1930 and 1956,” Stewart said.

“The very little correspondence that is known indicates Eliot wrote to Hale freely about his predilections, his fellow poets, and above all, his opinions as a reader,” Stewart added. “Eliot burned Hale’s letters, so we will not know her own views beyond his responses to them. As the 50-year-moratorium ends and the archive is opened to scholars at the new year, we will begin to learn far more about Eliot’s thought during this period of historical and, for him, personal upheaval. Students in our modernist poetry courses and the graduate students and faculty involved in our lively modernism group are eagerly looking forward to exploring the archive and sharing the news. Eliot is the rare poet who is also a vital critic and thinker; the contribution of the letters to our understanding of his work promises to be immeasurable.”

Michael Wood, the Charles Barnwell Straut Class of 1923 Professor of English and Comparative Literature, Emeritus, also attended the unsealing event. “I had ‘seen’ the letters on various occasions over the years, but only as stacks of brick-like brown paper parcels proclaiming the letters’ existence and current invisibility,” he said. “Then in October, we saw them — in boxes, in folders, in envelopes. Letters.”

Wood said he hopes that the letters will reveal new information to the scholars and students who now have access to them: “A friend once wrote that ‘Tom was more human’ in America than he was in England, and Emily Hale was an important part of this mode of being. He was also, it seems, rather afraid of being human, and perhaps we shall learn something more about this from the letters, as well as about many interesting literary matters.”

Princeton professor and 1926 doctoral graduate Willard Thorp played an essential role in Hale’s donation. Thorp, who served as the Holmes Professor of Belles Lettres and chair of the English department, maintained close relationships with countless poets and authors such as William Meredith, Robert Penn Warren, John Berryman and Eliot himself.

At the University, Thorp was responsible for establishing the Program in American Studies, which he led for 13 years. Thorp died in 1990. Thorp’s papers, which contain his correspondence with his literary colleagues as well as other materials from his Princeton career, are housed in Special Collections.

Shortly before she sent the collection of letters to Princeton, Hale wrote Thorp and said that the gift to the University was because of “my years of friendship with you.” Thorp, according to Skemer, “played a key role in the Library’s successful early efforts to acquire modern literary archives,” including the papers of F. Scott Fitzgerald.

Hale’s donated collection of T.S. Eliot letters were typed and dated, and the envelopes were postmarked. In particular, postmarks help Eliot scholars glean the amount of time it took Eliot to mail his correspondence after writing it.

“Nearly half of the letters were discovered to still be folded inside of their corresponding envelopes,” Pfendler commented. “This required processing staff to carefully remove each letter from its enclosure in order to improve and streamline handling of the materials in the reading room. All of the letters were rehoused with their envelopes and arranged in chronological order, and then sent to the Digital Imaging Studio for imaging. The resulting digital surrogates will allow multiple researchers to use the collection at once, and will facilitate increased access to a collection which has been garnering much attention and excitement.”

PUL houses a number of other Eliot correspondence in the papers of bookseller and publisher Sylvia Beach, Poet Laureate and writer Allen Tate, Fitzgerald, and others. PUL’s Special Collections is home to extensive holdings in modern literature, including the papers of Nobel laureate in literature Toni Morrison, manuscripts and correspondence from children’s writer Lewis Carroll, and letters and manuscripts from authors Charles Dickens, Emily Dickinson and Oscar Wilde.

“The next time I teach Eliot’s poetry, I plan to take students to Firestone Library to see the letters," Kotin said. "The visit will be an incredible opportunity to test the importance of Eliot’s famous claim about poetry and personality. ‘Poetry,’ he wrote in ‘The Tradition and the Individual Talent’ (1919), ‘is not the expression of personality, but an escape from personality.’ The letters will, I hope, allow students to judge how effectively Eliot escaped his own personality.”

The Eliot letters are under copyright until 2035 and will not be available for access online. Researchers can access the collection on a first-come, first-served basis in Firestone Library’s Special Collections, located on C floor.

For more information about accessing the collections, visit the Special Collections website.