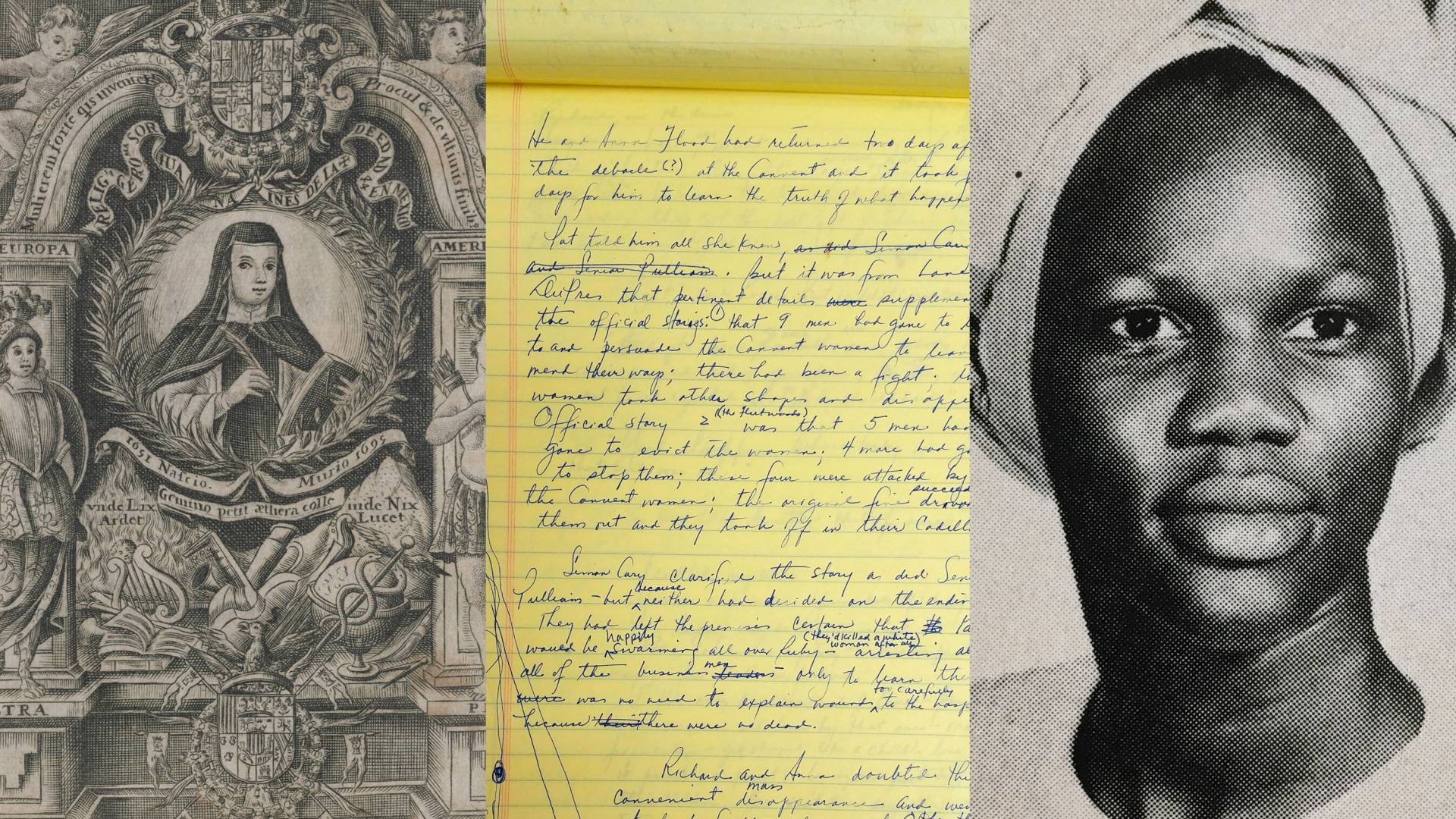 The Princeton University Library (PUL) spent March celebrating Women's History Month with a series of stories and other content that tell the history of women at Princeton, give overdue recognition to women in the Latin America manuscripts collections, identify missing female book owners in the library's holdings, and highlight the work of female writers, leaders and suffragists.

Below you can read excerpts from the PUL series in honor of Women's History Month.

In celebration of Women’s History Month, PUL highlights a selection of collection items that speak to the efforts of female writers, suffragettes and others who directly support issues related to women’s rights.

Library resources include the Miriam Holden Collection of over 6,000 volumes related to women's history. In 1960, Miriam Y. Holden noted in a speech to fellow bibliophiles that "throughout the ages men have recorded with care the achievements of men, and yet kept all too few records of the story of women." And so, "to reveal women's part in the making of long history," she assembled a remarkable collection of books, periodicals, manuscripts, clippings, photographs, cartoons, letters and other materials about women and their achievements. After her death in 1977, her husband, Arthur C. Holden, Princeton Class of 1912, presented the collection to Princeton.

PUL identifies women in the Latin America manuscripts collections, securing them a place in history

Processing Archivist Chloe Pfendler and Manuscripts Division Archival Resident Carolina Meneses led the research on these women who had been referred to by only their husband’s name or some other familial association. Meneses scoured the archive itself, genealogical sites and various sources, such as the New York Times obituary, to ultimately identify and secure a place in history for 14 women.

“Even though these unnamed women were erased from history, I found it really interesting that we could find them later through various associations,” Meneses said. “I enjoyed the opportunity to do that work.”

Another recently named woman is Josefina Lozano, the mother of Octavio Paz (1914-1988), a renowned Mexican poet. “The mother figure in Paz's poetry is complex and autobiographical in nature,” said Meneses, “and I think we could learn more about Josefina through studying his poetry more closely.”

According to Pfendler: “These women are no longer obscured by outdated naming conventions. Ultimately, this work facilitates better use of our collections.”

In early summer, Nicole Legnani, assistant professor of Spanish and Portuguese, anticipated a key hurdle in order to teach virtually in fall 2020. Legnani was planning her graduate seminar on colonial Spanish literature and the works of Sor Juana Inéz de la Cruz — the most celebrated female, Spanish-language writer of the 17th century.

Due to public safety restrictions related to the pandemic, Legnani knew the class might not be possible if students could not physically visit the library’s Special Collections to examine its rare and exquisite 17th-century editions of Sor Juana’s works.

These materials are only a sampling of items the team prepared over the summer for a wide variety of fall 2020 classes. They digitized over 340 Special Collections items including rare books, manuscripts, photo albums, photographs, posters, scrolls and artwork. This fall, over two dozen Princeton professors incorporated digitized Special Collections materials into course syllabi and class assignments.

Yours, mine, and hers: Her Book project identifies missing female book ownership in PUL collections

In October 2018, PUL's Rare Book Working Group examined more than 50 books from the Robert H. Taylor Collection. The selected items dated back to the 17th and 18th centuries and shared a common feature: they were inscribed by women.

That initial committee sparked an idea in Associate Professional Specialist Emma Sarconi’s mind. How many more women were obscured from recognition in PUL’s collections? After participating in the "Her Book" session of the Rare Book Working Group, hosted by Scheide Librarian and Assistant University Librarian for Special Collections Eric White and Librarian for Academic Programs and Curator of American Books and Western Americana Gabriel Swift, Sarconi continued surveying PUL’s collections, discovering and identifying female book owners.

Read the full story: Yours, mine, and hers: Her Book project identifies missing female book ownership in PUL collections

“How History is Made”: In search of Princeton’s first African American daughter

Princeton University enrolled its first class of undergraduate women in 1969. The Mudd Library blog features a 2012 interview with Vera Marcus, Class of 1972. Marcus is the first known undergraduate African American woman to graduate as a “Princetonian."

To be sure, women were part of the intellectual and social life of the college long before Marcus entered in 1969. For example, there was the founding of Evelyn College for Women in 1887; the imprint left by the wives of deans and faculty members, such as Isabella McCosh, the wife of President McCosh and beloved 19th century figure of the college; the admittance of women as graduate students in the 1960s; and the presence of young women from neighboring colleges, who participated in a year-long concentrated study in “critical languages.” However, the caveat, as Marcus explains: “what distinguishes [her] class is that [they] were admitted as Princetonians and graduated as Princetonians.”

During a two-day oral history interview with Marcus in April 2012, she elaborated on these matters with the wisdom and emotions that only a woman who has walked in her shoes can.

Read the full blog post: “How History is Made”: In Search of Princeton’s First African American Daughter