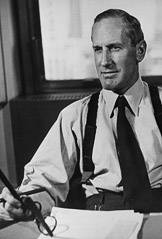 T.S. Matthews, shown sitting behind his desk at Time, is credited with improving the level and impartiality of writing at the magazine and with cultivating good writers during his years as an editor. Photo : Courtesy of the Princeton University Library Department of Rare Books and Special Collections

The Princeton University Library has acquired the papers of the American journalist, editor and author T.S. (Thomas Stanley) Matthews, a member of Princeton's class of 1922 who spent much of his long and distinguished professional career at Time magazine.

T.S. Matthews began as Time's books' editor in 1929 and rose in the editorial ranks to become the magazine's managing editor in 1943 and finally editor in 1949. He left the magazine in 1953 and moved to England, where he wrote several books. He died there in 1991.

Matthews' papers include correspondence; diaries and appointment books; typescripts of published and unpublished writings; working materials for his biography of T.S. Eliot; photographs; and other materials documenting his career as a journalist and author.

"The library is particularly pleased to have the Matthews Papers because they complement our excellent holdings on modern literature and publishing history, but also contain some interesting files pertaining to American politics during the Cold War," said Don Skemer, curator of manuscripts in the library's Department of Rare Books and Special Collections.

Before joining Time, Matthews served on the editorial staff of The New Republic from 1925 to 1929 under the aegis of Edmund Wilson, a member of Princeton's class of 1916.

When he was named editor at Time, Matthews succeeded the magazine's founder, Henry Luce, but had a sometimes tense relationship with him. Matthews believed that journalism was "a crude but fairly effective means of keeping a democracy awake and self-conscious." He was credited with improving the level and impartiality of writing at Time and with cultivating good writers, who in the post-War years included James Agee, John Hersey and Whittaker Chambers.

His papers include internal memoranda from his final 10 years at Time, including some relating to the Alger Hiss case and Whittaker Chambers' accusations. In 1948, Chambers, a senior editor at Time and a former Communist, accused Hiss of being a Communist while in federal service. Hiss was a State Department official involved in the establishment of the United Nations. While both men were at different points suspected of espionage and perjury, only Hiss was convicted of perjury.

During the 1952 U.S. presidential election campaign, Matthews took a brief leave of absence to write speeches for the Democratic candidate, Adlai Stevenson, his Princeton classmate. Luce and the senior management of Time supported the Republican candidate, Dwight Eisenhower. Following Eisenhower's victory, Matthews left the magazine and moved to England and lived at Cavendish Hall, near Cambridge.

Matthews was a loyal Princeton alumnus, who gave generously to the University and the library. He was married three times -- to Juliana Cuyler, the mother of his four sons; to the American journalist Martha Gellhorn; and finally to Pamela Peniakoff, who survived him.

The papers are the gift of the Rev. Timothy Anderson, his literary executor, and the Matthews family. His son John P.C. Matthews, a member of the class of 1951, played an instrumental role in bringing the papers to Princeton and his father's extensive library to the Redwood Library and Athenaeum in Newport, R.I.

The Matthews papers are available to researchers using the library's Department of Rare Books and Special Collections. For more information, contact Skemer at dcskemer@princeton.edu.