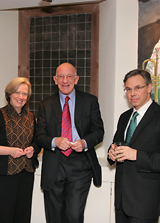 Peter B. Lewis, a 1955 graduate and trustee of the University (center), will contribute $101 million to support a major new initiative to enhance the role of the creative and performing arts in the life of the University and its community. He is shown here with Princeton President Shirley M. Tilghman and Stan Allen, dean of the School of Architecture and chair of the President's Task Force on the Creative and Performing Arts.

Peter B. Lewis, a 1955 graduate and trustee of Princeton University, will contribute $101 million to support a major new initiative to enhance the role of the creative and performing arts in the life of the University and its community. The gift was announced by President Shirley M. Tilghman following Jan. 20 meetings of the University's Board of Trustees.

With this gift, Lewis' total contributions to the University, both for unrestricted support through Annual Giving and for a range of designated purposes, now exceed $220 million and establish him as the University's most generous donor in the modern era.

"Peter's extraordinary gift launches a new era in Princeton's commitment to the arts, and firmly establishes him as one of the most significant benefactors in all of Princeton's history," Tilghman said. "His gift is a visionary investment in ever-greater levels of academic excellence and leadership that will catalyze change in learning, teaching and the overall quality of daily life for everyone at Princeton. We aspire to create a distinctive educational model that seamlessly integrates the creative and performing arts into an undergraduate liberal arts program that is second to none. Peter's confidence in Princeton will make this goal attainable."

Lewis' gift will fund a significant portion of an ambitious new initiative that Tilghman outlined for the trustees. That initiative -- based on an intensive year-long assessment of Princeton's strengths and aspirations in the arts -- will include an expansion of programs in these fields, a significant increase in the number of artists teaching and collaborating on research at Princeton, and the creation of a new physical complex with improved and expanded facilities for the study and presentation of the creative and performing arts.

"Peter's generosity will greatly increase the impact and prominence of our relatively small but extremely distinguished academic programs in creative writing, theater and dance, visual arts and music performance, and it will enhance campus exhibition space and our stellar Art Museum," Tilghman said. "These programs increasingly attract excellent students, but Peter's gift will give us an opportunity to establish Princeton more fully as a national and international destination for the very best students with talents and interests in the arts. This is also an opportunity to ensure that we offer students pursuing concentrations outside the arts the kind of meaningful artistic and cultural resources and experiences considered essential elements of an exceptional undergraduate education."

Lewis, an internationally acclaimed business leader and philanthropist, is chairman of the board of the Progressive Corp., the nation's third largest auto insurer. His previous gifts to Princeton include $60 million for the Peter B. Lewis Science Library, designed by acclaimed architect Frank Gehry and currently under construction; $35 million to establish the Lewis-Sigler Institute for Integrative Genomics, named to honor his lifelong friendship with his Princeton classmate, the late renowned structural biologist Paul Sigler; and several gifts related to the arts, including funding for performance and rehearsal space for student extracurricular arts groups and student radio station WPRB in Bloomberg Hall and a suite of studio spaces for the Program in Visual Arts at 185 Nassau Street. Lewis gave his first million dollar gift to Princeton in 1982 to create a gallery for contemporary art in the Princeton University Art Museum.

Commenting on his gift, Lewis said, "Princeton has always shown exceptional vision in targeting important areas of study and mastering them with conviction. This is an institution known worldwide for the excellence of its teaching and research in the humanities and social sciences, and in the natural sciences and engineering. Princeton now aspires to a similar level of excellence and distinction in the creative and performing arts, and I am delighted to participate in achieving this truly important goal."

Tilghman's report to the trustees was based on the work of a faculty committee chaired by Dean of the School of Architecture Stan Allen, as well as consultations with faculty, students, alumni, practicing artists and others and travels to other leading institutions around the country. The report identifies this as "a unique moment for the arts at Princeton University," with an opportunity for Princeton "not only to expand its programs in the creative and performing arts, but to establish itself as a global leader in the quality of its offerings and in their integration into a broader liberal arts education." Its commitments to fundamental research and outstanding teaching, and its support of interdisciplinary thought and practice, "allow Princeton to launch a distinctive initiative in the arts, one that breaks down barriers between theory and practice and thoroughly integrates intellectual and artistic pursuits into a shared educational and research mission."

Tilghman notes in her report that Princeton "fully embraces the creative and performing arts as an essential part of its educational mission" and recognizes that "universities have increasingly become important patrons of the arts … where new ideas and forms of expression can flourish." She points out that "by participating in the arts, our students develop cognitive abilities and forms of intelligence that complement training in other disciplines, and in some cases they discover talents and interests that will shape their careers and principal avocations."

In addition, the report states that "the arts are also critical to the University's ability to attract outstanding students. With increasing frequency, the most academically gifted prospective students have deeply felt commitments to some aspect of the arts. For the most part these students do not aspire to become professional artists, but they seek a university where they can integrate their academic pursuits with their artistic passions. … To compete successfully for these students in the future, Princeton needs to create a higher profile for the arts on campus and ensure that we have sufficient curricular offerings and artistic venues to accommodate student interests."

As envisioned in the report, the arts would be in "dynamic partnership" with other University departments in the humanities and, increasingly, in engineering and the natural and social sciences as well. Princeton's programs "should aim to engage the artistic talents, and excite the passions, of students in all the University's departments, not just those with a special focus on the arts, and they should offer arts training to this broad range of students in the context of a first-rate liberal arts education. … Any university that aspires to offer students a great liberal arts education must ensure that they have meaningful experiences in the creative and performing arts."

The proposal that Tilghman outlined for the trustees includes the following actions: