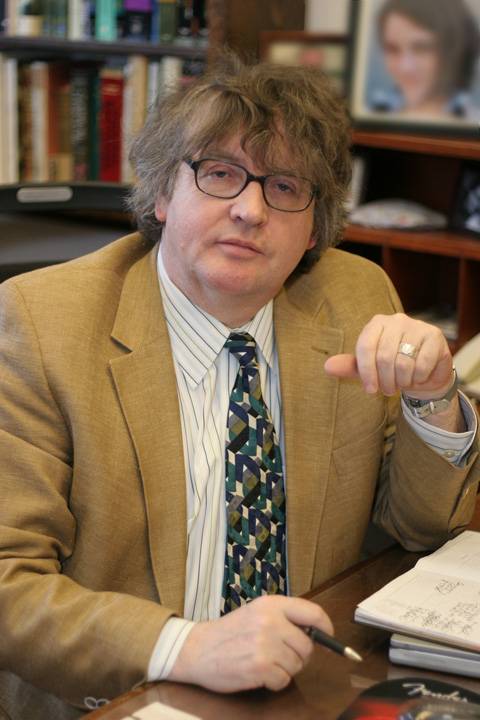 Paul Muldoon, a Pulitzer Prize-winning poet and a Princeton faculty member since 1990, has been selected as the founding chair of the new University Center for the Creative and Performing Arts.

The center is part of a major initiative announced by President Shirley M. Tilghman in January to enhance the role of the creative and performing arts in the life of the University and its community. Tilghman also announced a $101 million gift from Peter B. Lewis, a 1955 graduate and trustee of the University, that will help support the initiative.

Muldoon, the Howard G.B. Clark '21 University Professor in the Humanities, will begin his three-year appointment as the center's chair on April 1.

"I am delighted that Paul Muldoon has agreed to become the founding chair of the University Center for the Creative and Performing Arts," Tilghman said. "As one of the most pre-eminent poets of his generation, as well as a dedicated teacher and a seasoned administrator, Paul is the ideal person to launch this exciting new initiative for Princeton."

The center is intended to serve as a focal point for scholarship, teaching and practice in the arts and to provide leadership and advocacy for the arts at Princeton. Muldoon will oversee, coordinate and encourage exchange among the University's curricular programs in creative writing, theater and dance, and the visual arts. He also will work closely with the Program in Music Performance in the Department of Music, the University Art Museum and the Council of the Humanities.

In addition to the center, elements of the initiative include an expansion of programs in the arts; a significant increase in the number of artists teaching, creating new work and collaborating on research at Princeton; and the creation of improved and expanded physical facilities for the study and presentation of the creative and performing arts. The plan is an outgrowth of work done last spring by the President's Task Force on the Creative and Performing Arts, a faculty committee that Tilghman charged with developing alternatives for the expansion of the arts at Princeton. Muldoon was a member of that group.

"We've come to understand more widely at Princeton that the arts may be central to the experience here -- not necessarily overshadowing any of the other areas that a student might pursue -- but that there's something about the way in which the arts make us understand who we are and what we're doing that I think has become, particularly under President Tilghman's leadership, more central to the University's idea of itself," Muldoon said. "I'm especially keen to help develop that idea."

Muldoon said that he looks forward to working with interested parties from a variety of fields on planning for the center.

"We want to open up things a great deal more," he said. "Sometimes there's been a feeling that the arts are for someone else, for somewhere else, at some other time. I'd like to think Princeton students will have a sense that making art is for them, here and now."

"We will be attempting to make it clear that the arts are central to the life of an educated person, whether she or he might be majoring in chemical engineering or computer science or whatever it might be," he added. "One of the delights of Princeton has to do with the curriculum that allows computer science and chemical engineering and comparative literature majors to write poetry and paint and produce plays."

Muldoon was born in Northern Ireland and worked in Belfast from 1973 to 1986 as a producer of radio and television programs on the arts for the British Broadcasting Corp. He moved to the United States in 1987, joined the Princeton faculty as a lecturer in 1990 and was named a full professor in 1995. From 1999 to 2004, he also held the honorary position of professor of poetry at Oxford University.

Muldoon directed the University's Program in Creative Writing from 1993 until 2002 and is serving as acting director this year. He also chairs the Fund for Irish Studies, which offers courses and sponsors events about Ireland, and co-chairs the Princeton Atelier program, which brings guest artists to campus to collaborate with students and faculty.

Muldoon won the 2003 Pulitzer Prize for poetry for "Moy Sand and Gravel," his ninth collection of poems. His 10th collection, "Horse Latitudes," is due to appear in the fall of 2006. A fellow of both the Royal Society of Literature and the American Academy of Arts and Sciences, he was given an American Academy of Arts and Letters award in literature in 1996. His other awards include the 1994 T.S. Eliot Prize for Poetry, the 1997 Irish Times Poetry Prize, the 2003 Griffin International Prize for Excellence in Poetry, the 2004 American Ireland Fund Literary Award, the 2004 Shakespeare Prize and the 2005 Aspen Prize for Poetry.

Muldoon also has published in the fields of drama, literary criticism, translation and children's literature. In addition, he has delved into the musical arena, most recently writing an original chamber opera with composer Daron Hagen that was produced by students in Princeton's Atelier last spring. He writes lyrics and performs on guitar and percussion in Rackett, a rock band he formed in 2004 with Princeton Professor of English Nigel Smith and three other part-time musicians.