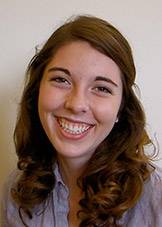 Princeton University senior Flannery Cunningham has been named a George J. Mitchell Scholar to spend a year studying music composition at University College Cork in Ireland. The Mitchell Scholarships were awarded to 12 students nationwide by the Washington D.C.-based U.S.-Ireland Alliance.

A native of St. Cloud, Minn., Cunningham is majoring in music with a certificate in creative writing. She was influenced by Irish and Scottish traditional music at a young age and has spent her years at Princeton combining interests in music and poetry.

Cunningham said pursuing a master's degree in composition in Ireland would allow her to develop a richer understanding of the songs she grew up listening to that her Irish-American father played on the fiddle.

"Studying in Ireland would expand both my ear and musical comprehension," she said. "I've no doubt this aural and intellectual understanding would enrich my own writing, enable me to wed Irish styles to other fascinating kinds of tunes, and help me write pieces that I hope will honor the long and lovely Irish tradition while also exploring history and sound in a way that is distinctly my own."

Cunningham was among the nearly 300 applicants for this year's Mitchell Scholarships, which recognize outstanding academic distinction, leadership and community service. Recipients spend a year of postgraduate study at institutions of higher learning in Ireland and Northern Ireland.

"Flannery is unusual in the range and depth of her talents," Professor of Music Daniel Trueman said. "There are very few artists who combine abilities in composition and poetry the way she does, which puts her in the special position of being able to draw them together in ways others cannot. This is also a perfect match for Ireland, where music and poetry are central to the culture."

Cunningham has experience writing pieces for choirs, solo or duet singers, and small instrumental and mixed chamber ensembles. She also has set to music poems by Walt Whitman, Robert Bly and John Ashbery. Her senior thesis for the Princeton music department is a libretto and score of an opera about the 1804 duel between Alexander Hamilton and Aaron Burr.

Paul Muldoon, the Howard G.B. Clark '21 University Professor in the Humanities and professor of creative writing, said he was impressed with Cunningham's work for the course "Words for Music Perhaps?" It was co-taught with "Riverdance" composer Bill Whelan through the Lewis Center for the Arts' Atelier Program.

"Flannery wrote a very complex scene for a piece of musical theater," Muldoon said. "In our classes, we always treat students as if they are bona fide artists and are as likely to write something that is effective as someone who has been doing it for 50 years."

In 2011, Cunningham was among the recipients of Princeton's Martin Dale Fellowship. She used the award to write her first oratorio featuring a chamber choir, chamber orchestra and vocal soloists. "The Navigator," which explored the travels of sixth-century Irish monk St. Brendan the Navigator, was performed in a public concert in her hometown of St. Cloud.

She also has composed pieces for the Minnesota Center Chorale and the New York Youth Symphony.

"Composition unites so many of my passions," Cunningham said. "It requires careful thought about structure and human psychology, wonderful play with raw sound, draws on my love of poetry, and offers the chance to move and delight an audience with an immediacy rivaled by few other forms of art."

During the summer of 2012, Cunningham traveled to Chiapas, Mexico, to intern with the theater company Fortaleza de la Mujer Maya ("Strength of the Mayan Woman"), which creates plays on themes of social justice. There, she led vocal workshops for Mayan actresses and taught dance and music classes for children. In June 2010 she completed the Princeton in Spain Language Program in Toledo.

Assistant Professor of Music Anna Zayaruznaya said Cunningham's breadth of interests in composition, musicology and performance studies give her a strong foundation.

"For an ambitious young composer like Flannery, a year of working in the musically rich atmospheres to which the Mitchell will expose her will be crucial in helping her to define and refine her creative voice," Zayaruznaya said.

Cunningham is a peer academic adviser in Forbes College and has led half and full marathon training groups. She completed the Philadelphia Marathon on Nov. 18.

Cunningham is expected to begin her year as a Mitchell Scholar at University College Cork in September 2013.