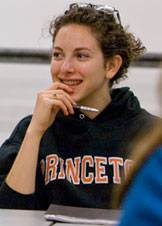 "The Great Immensity," a work-in-progress about global climate change, will debut Saturday, April 17, at the Berlind Theatre. The interpretive theatrical piece with music is the result of a yearlong collaboration between the New York-based Civilians and faculty, researchers and students from the Princeton Environmental Institute (PEI), and the Princeton Atelier at the University's Lewis Center for the Arts. Senior Carolyn Edelstein is among the students participating in a related course, "Princeton Atelier: Environmental Documentary and Music Theater." (Photo: Brian Wilson)

Read a Q&A about the making of "The Great Immensity" with Steve Cosson, artistic director of The Civilians

In a collaboration melding art with science, climate researchers and other members of the Princeton University community have joined forces with The Civilians, an acclaimed investigative theater company, to help create a work-in-progress about global climate change that will be unveiled on campus Saturday, April 17.

Titled "The Great Immensity," the interpretive theatrical piece with music is the result of a yearlong collaboration between the New York-based Civilians and faculty, researchers and students from the Princeton Environmental Institute (PEI), and the Princeton Atelier at the University's Lewis Center for the Arts.

The workshop production -- a dramatic treatment of global climate change -- examines the issue through staged scenes based on the creators' documentary-style interviews of climate science experts and ordinary people. The work explores the emotional and psychological aspects of the current environmental crisis.

Productions will be staged at 2 p.m. and 7:30 p.m. April 17 in the Berlind Theatre at the McCarter Theatre Center. Both performances will be followed by interactive talks with the artists and PEI faculty.

"We are seeking to re-establish the public's connection to the deeply troubling realities of climate change." said Katharine Hackett, PEI's associate director. "For a number of important reasons, people have become confused about the importance and severity of global change. Through the combination of science and artistic expression, we have a considerable opportunity to bridge the emotional divide and penetrate the audience's consciousness with a glimpse of reality." 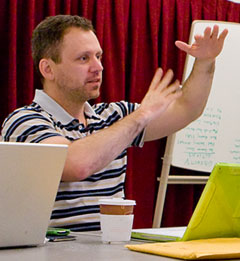 Playwright Steve Cosson, artistic director of The Civilians, is leading the project with composer Michael Friedman. Cosson and Friedman are in residence with PEI this academic year and are leading the Atelier course. (Photo: Brian Wilson)

The project is being led by Steve Cosson, a playwright, and Michael Friedman, a composer. Cosson and Friedman have been in residence at Princeton as the Currie C. and Thomas A. Barron '74 Visiting Professors in the Humanities and the Environment with PEI for the 2009-10 academic year. Cosson is founding artistic director of The Civilians. Friedman is a lyricist and a founding associate artist of the theater group.

The production is based on interviews with Princeton faculty, many of whom are affiliated with PEI and are world leaders in climate research. Among the scientists collaborating on the project are: evolutionary biologists Jeanne Altmann, Lars Hedin, Stephen Pacala and Dan Rubenstein; geoscientist Francois Morel; climate policy authority Michael Oppenheimer; bioethicist Peter Singer; and mechanical and aerospace engineer and carbon mitigation expert Robert Socolow.

Pulitzer Prize-winning poet Paul Muldoon, chair of the Lewis Center and director of the Princeton Atelier, has been centrally involved. "What I find truly exhilarating about this project is that we've had an opportunity to bring together some of Princeton's experts in climate change with some of the most engaging, and engaged, theatrical talents in the country," said Muldoon, the Howard G.B. Clark '21 University Professor in the Humanities. "Together they'll be helping us understand something of the complex issues facing us all. The best art, like the best science, isn't about simplification. It's about the clarification of complexity. We're so proud to see the Lewis Center collaborate with PEI on this project."

The idea for the play grew out of discussions Cosson and Friedman had with the leadership and faculty of PEI and the Lewis Center in 2008. Would it be possible, they wondered, to put together a drama that could convey cutting-edge science in climate change in a way that could both stir and alter public perceptions?

In addition to the faculty members, Princeton community members and undergraduates also are contributing to the production, with some taking part in developing content and others working as cast members. The students are part of a course being taught by Cosson and Friedman this semester through the Princeton Atelier at the Lewis Center. The workshop production will feature both professionals from The Civilians and also Princeton students. 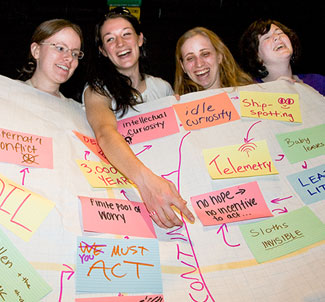 Princeton students are contributing to the production, with some taking part in developing content and others working as cast members. These students created a flow chart of environmental issues to discuss as part of a rehearsal earlier this month. (Photo: Denise Applewhite)

The effort is designed to inform and inspire the public and enrich the academic experience of faculty and students.

"PEI is dedicated to advancing solutions to complex and fundamental environmental problems," Hackett said. "Through this innovative use of PEI and Lewis Center resources, this collaboration is advancing scholarship by creating a bridge between environmental studies and the humanities. Through the incorporation of artistic expression, it will also, in nontraditional ways, have an impact on environmental education at Princeton University."

The work at Princeton follows years of research Cosson and Friedman conducted on Barro Colorado Island in the Panama Canal and in Churchill, Manitoba, Canada. Both of these places share unique natural wonders, a center of scientific research and a relationship to global shipping. The play takes its name from an enormous container ship that the authors observed traversing the Panama Canal.

On the island and in Churchill, Cosson and Friedman interviewed botanists, paleontologists, climatologists, indigenous community leaders, polar bear tour guides and trappers as Cosson explained, "to give voice to real people whose stories make the reality of the present crisis tangible and viscerally felt, inspiring us all to make the profound changes this moment demands."

PEI is the interdisciplinary center for environmental research, education and outreach at Princeton. The Princeton Atelier, created in 1994 by Nobel laureate Toni Morrison, brings professional artists to campus for intensive collaborative work with students and faculty. Atelier artists select a project they want to explore in the company of students before developing it for the professional art world. The Lewis Center, home of the Atelier, is an academic unit designed to put the creative and performing arts at the heart of the Princeton experience. The Civilians' mission is to create new theater from creative inquiries into the most vital questions of the present.

The workshop production will present a dramatic treatment of global climate change, examining the issue through staged scenes based on the creators' documentary-style interviews of climate science experts and ordinary people. (Image: Amy Hepler)