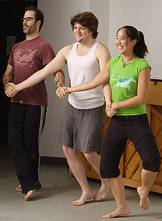 Students in this semester's Princeton Atelier will showcase their work in a performance, "Pieces of Strange," at 7 p.m. and 9 p.m. Wednesday, Dec. 10, in 301 Frist Campus Center. The students have been collaborating with actor/magician Steve Cuiffo and theater artists Trey Lyford and Geoff Sobelle. Sobelle (left) is shown here rehearsing a comedic dance with seniors Sam Zetumer and Stephanie Chen. 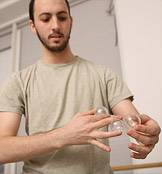 Budofsky demonstrates some magic by making balls disappear and reappear.

An event featuring the collaborative work created by students in their Princeton Atelier course with an actor/magician and theater artists is set for Wednesday, Dec. 10.

Free performances of "Pieces of Strange," an evening of magic, theater and comedy, will be presented at 7 p.m. and 9 p.m. in 301 Frist Campus Center. 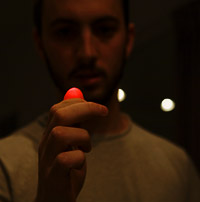 Sophomore Joshua Budofsky shows off what could be his glowing thumb.

This Atelier explores how the skills of actors, designers and playwrights can create an illusion that transforms the audience and -- even if only for brief moments -- takes them into an altered reality. Magic becomes an expressive tool that encourages spectators to question what they see and hear on stage and interpret whether the performance is an illusion or reality.

"It doesn't work to imitate the work of others, but rather find your own clown," Sobelle said. "Even the great magicians, such as David Copperfield, in their own way are 'clowning' as they perform their magic."

Princeton Atelier courses attract students from departments and programs across campus and frequently are cross-listed with other programs.

"Students have a hunger to explore and launch into a crazy idea," Lyford said. "The benefits of working with these Atelier students, whose majors include computer science, prospective physics and mathematics, is that they are willing to challenge the guest artists and create a theatrical performance that goes outside the traditional playwright/director model." 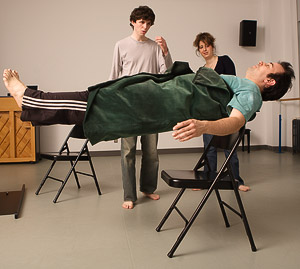 Senior Sam Zetumer described the Atelier as a combination of the creative and the concrete. "We approach creating material from an actor's standpoint," he said. "Working on characters and scenes feels like a cross between acting, painting and dreaming. We keep our minds stocked with a reservoir of great imagery and ideas that all begin with 'wouldn't it be cool if. ...' On the practical end, we develop concrete skills that might allow us to realize those surreal images. We strive to make these two procedures, the dreaming and the skill-building, meet in the middle hopefully without compromising too much (some of the surreal images are pretty ambitious). At least, that's what it seems like we're doing."

Founded in 1994 by Nobel laureate Toni Morrison, the Robert F. Goheen Professor in the Humanities Emeritus, the Princeton Atelier is now directed by distinguished poet Paul Muldoon, the Howard G.B. Clark '21 Professor in the Humanities and chair of the Lewis Center for the Arts. The program brings professional artists to campus for intensive collaborative work with students and faculty. Artists select a project with which they want to experiment and explore in the company of students before developing it for the professional arts community.

"Pieces of Strange" is the first step. Following the Dec. 10 performance by Princeton Atelier students, the piece will be presented by the three guest artists at a workshop in New York in January and then further developed through a commission from the Center Theatre Group in Los Angeles before its public performance next year.

Chen takes flight with the aid of a mirror.

"It's a very exciting prospect to have the students involved from the ground up," Sobelle said. "Working with the students will help articulate the ideas of this piece. They will help us develop the magic, be involved in the dramaturgy, assist in the performance of magic, both on and offstage, and contribute to all elements of directing, lighting and sound for the performance."

Carol Rigolot, executive director of the Humanities Council, said, "It is fitting for this imaginative Atelier to have been sponsored in part by the David A. Gardner '69 Magic Project. Created in memory of a wonderfully creative alumnus, the project is a kind of venture capital fund for the humanities, fostering valuable initiatives. Bringing together students and practitioners to experiment with a new kind of theater is just such an initiative."

Founded in 1994, the Princeton Atelier brings professional artists to campus for intensive collaborative work with students and faculty. Artists select a project with which they want to experiment and explore in the company of students before developing it for the professional arts community.

Arts advocates look to each other for ideas, hope in difficult economy