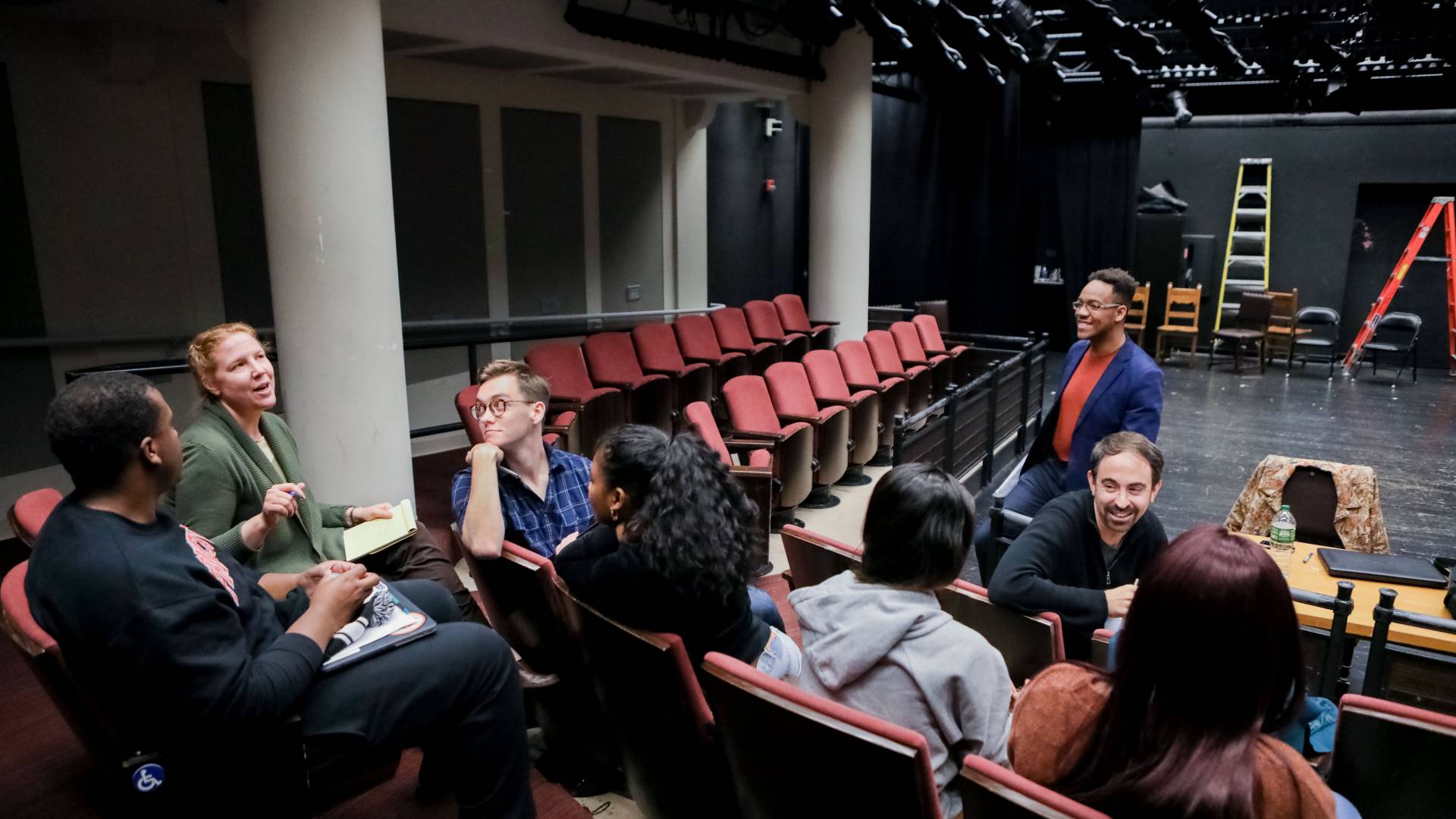 The Princeton and Slavery Project website has created opportunities for students and community members to explore the project's findings through arts classes, newly commissioned plays and an art installation. Cara Reichel, a member of the Class of 1996 (back row, second from left), and Peter Mills, a 1995 alumnus (front row at right), instructors of the Princeton Atelier course "Who Owns a Song? A Theatrical Investigation of Princeton and Slavery," facilitate a discussion with guest actor/composer Troy Anthony (standing).

How does theater help us navigate charged issues? How does a sculpture help bring history into the present moment? The Princeton and Slavery Project is creating opportunities for Princeton students and community members to bring the arts to questions like these — in the classroom, at McCarter Theatre and through an installation commissioned by the Princeton University Art Museum.

Headed by Professor of History Martha Sandweiss, the Princeton and Slavery Project is the culmination of five years of academic research that examines the ties of early University trustees, presidents, faculty and students to the institution of slavery. The project was built out of history seminars taught by Sandweiss that focused on archival research. A website makes hundreds of assets and historical documents available to scholars worldwide, and the project is the focus of a Nov. 16-19 symposium.

Students in two fall arts courses are using the findings of the project to create performance pieces.

On a recent Thursday afternoon in Whitman Theater, the 11 undergraduate students in the Princeton Atelier "Who Owns a Song? A Theatrical Investigation of Princeton and Slavery" introduced themselves to guest speaker Kirsten Childs, an award-winning writer of musicals and an adjunct professor at New York University's Tisch School of the Arts.

Taught by composer/lyricist Peter Mills, a 1995 alumnus, and Cara Reichel, a member of the Class of 1996, the course uses "the art form of musical theater as a tool to engage with the history being documented through the Princeton and Slavery project," Reichel said. She and Mills, along with several other alumni from their era, founded the Off-Broadway Prospect Theater Company to develop and produce new musicals.

Childs is among several guest artists who have visited the class. She shared her own story of growing up in Los Angeles and the difficulty of discovering a place for herself as an African American among the mainstream white world of American musicals. 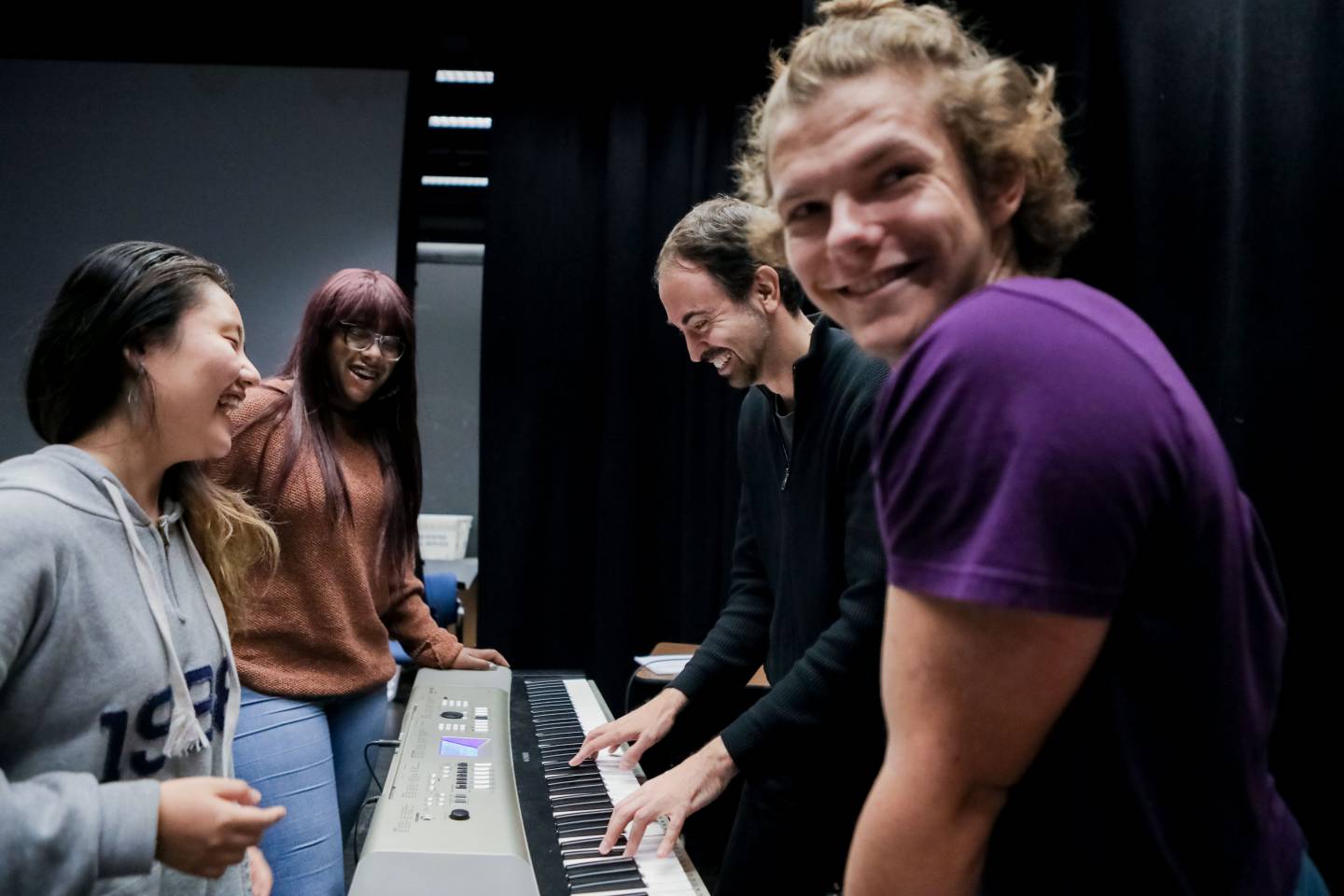 Like all Atelier courses, the class will culminate in an original performance — in this case, a 60- to 75-minute public presentation of short music theater pieces written and performed by the students on Jan. 13, 2018, in the Faculty Room at Nassau Hall.

"In this class, we started with the research and we're looking for the contemporary hook to write about it," Mills said.

Reichel told the class, "For me, something about musicals can take you to a place that's hard, but through music, there's an emotional release that you can find."

Sophomore Eli Berman, a music major, is one of four students in the course who took Sandweiss' freshman seminar, "Princeton, Slavery and Historical Memory," last year.

Mills recalled a highlight from a recent class. "We began to dive into the details of the piece we'll be creating. It was a discussion that I'd been dreading in some ways, because it's such difficult subject matter. But once the discussion began, the most amazing thing happened: it became a freewheeling creative brainstorming session, with all the students contributing and each idea sparking several more. It felt like a regular writers' workshop, and I could see how we were going to be able to collaborate and create this piece together," he said.

Students in another arts course, "Autobiographical Storytelling: Princeton, Slavery and Me," are using an array of storytelling modes to gain writing and performance skills to remake the raw material drawn from lived experience into compelling autobiographical storytelling.

The class is also studying the guided tour as a performance genre. One of the assignments is to devise "personal Princeton tours" during the Princeton and Slavery Symposium. At 3 p.m. Nov. 18, the students will lead attendees from McCosh Hall to McCarter Theatre.

"The students — like the rest of the world — have full access to the findings of the Princeton and Slavery Project," Herrera said, "and will draw upon the materials and their own personal stories, as they build a guided tour offering an intimate, interesting and honest reflection of what it feels like to be a Princeton student in this moment in history."

They will also offer a collaborative presentation demonstrating their work in the course, which will be performed at 7 p.m. Dec. 13 at the Paul Robeson Center for the Arts in the town of Princeton. 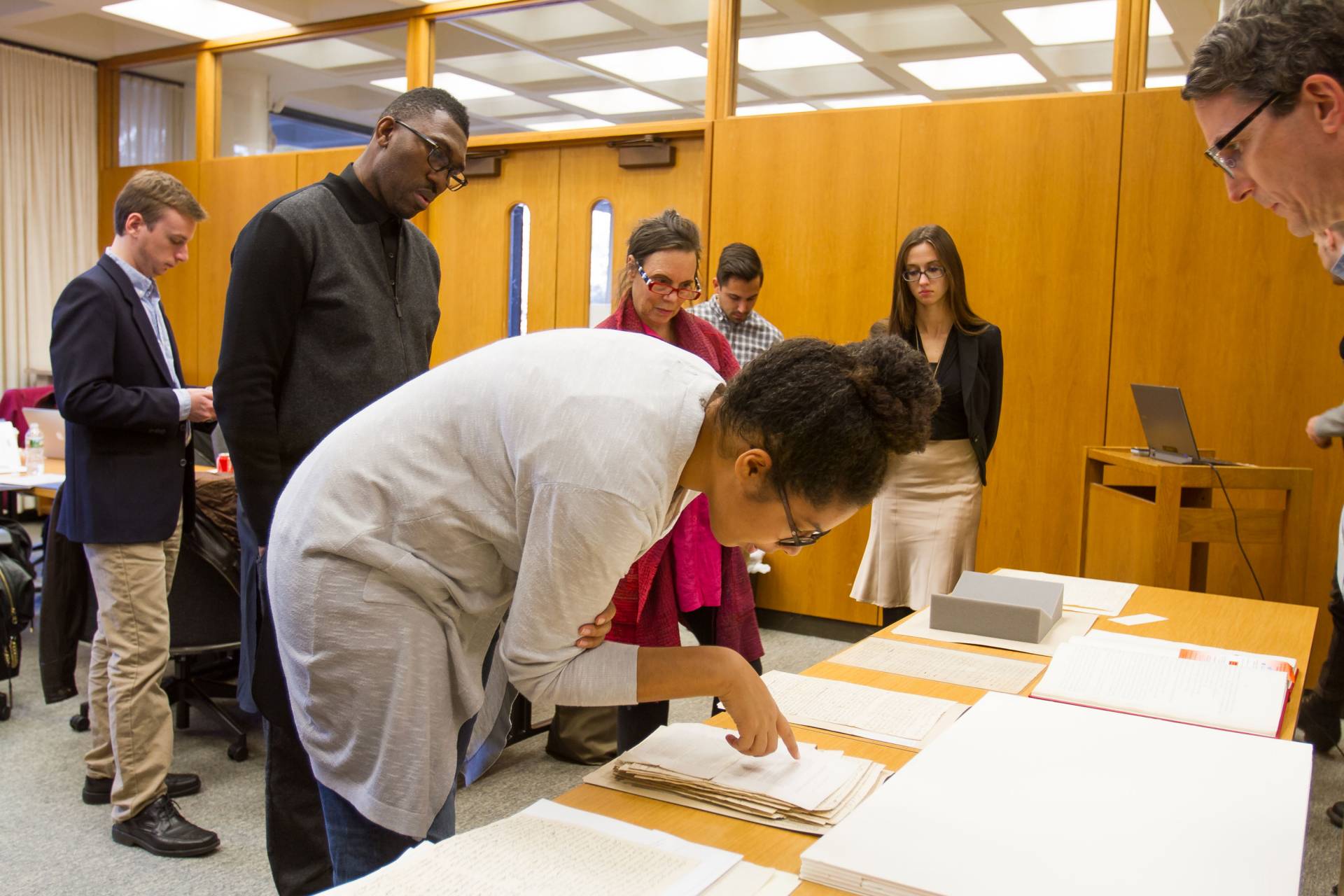 Character study: 'Listening backwards to the past'

On Nov. 18 and 19, McCarter Theatre will present readings of seven new 10-minute plays inspired by the Princeton and Slavery Project.

Mann, who is in her 28th season as artistic director and resident playwright at McCarter, said she has spent most of her life exploring the ways theater can help people grapple with difficult topics.

"When people can put themselves in another person's shoes, they are able to understand highly charged situations in ways that allow them to avoid responding defensively, or responding only on an intellectual level," she said. "That's one of the big things theater can do, more than any other art form. It can provide empathy, or an empathic response."

Graduate student Isabela Morales said that a lot of the research she and other graduate students did for the playwrights involved digging through the archive on their behalf.

While the Princeton and Slavery Project compiled a huge collection of primary sources,  these materials were not yet available on the project website when the playwrights were beginning to work on their scripts last November.

Playwright Guha was interested in the colonization movement of the early 1800s; her play is titled "Elizabeth." Morales showed Guha two diaries written by Robert Sawyer, a Princeton alumnus who traveled to Liberia as a missionary after he graduated, which also had been digitized as part of the project.

"Very little has ever been published about Sawyer," Morales said. "But now he appears as a character in Dipika's play, and some of the emotional and historical content of his diaries is being shared with the public in an incredibly moving way."

"The more I read, the more 'Elizabeth' grew out of the bones of the source material," Guha said. "It was incredible to see Sawyer's handwriting firsthand and to touch [the diaries'] pages." 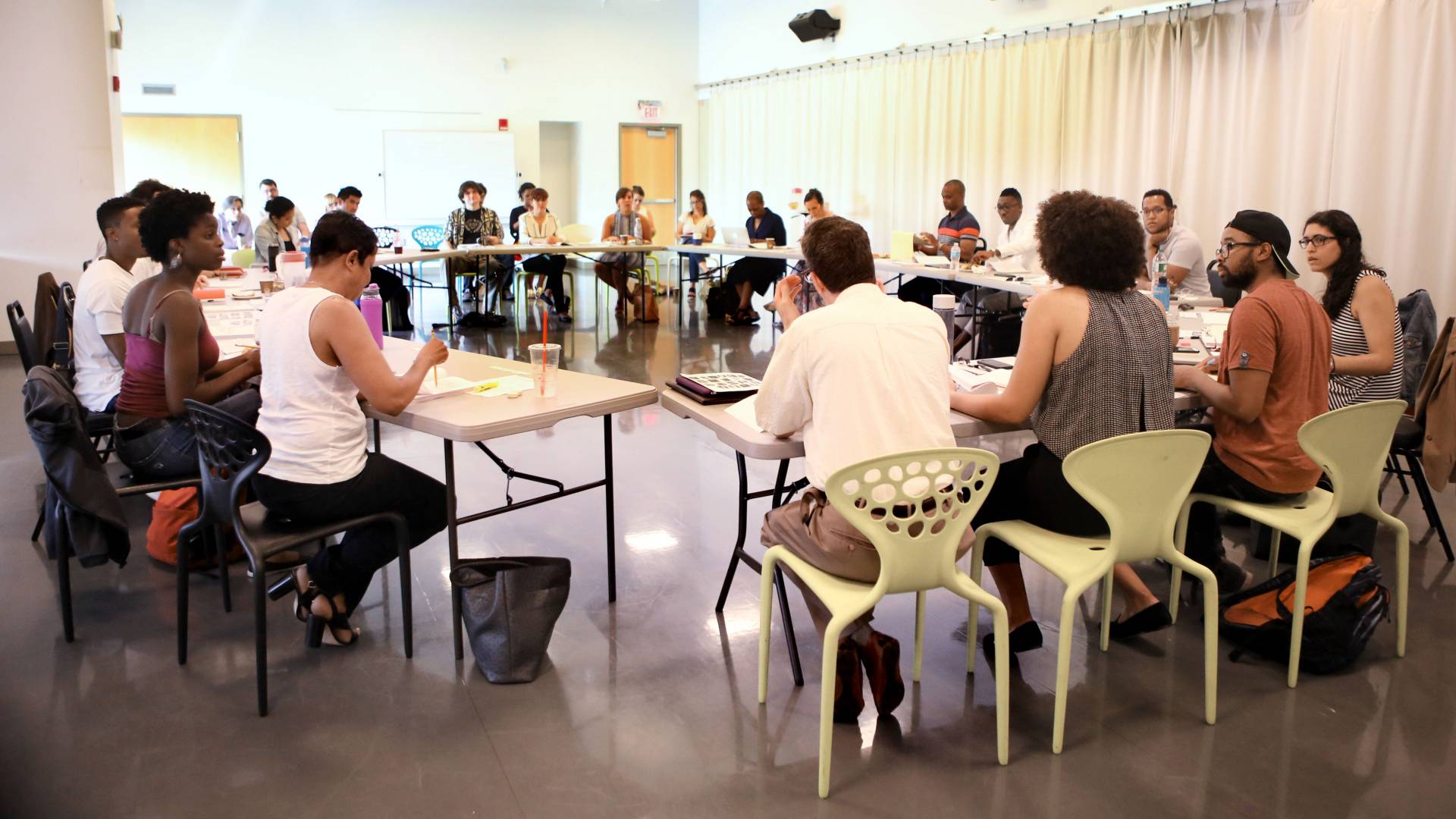 The playwrights and actors gather for a July workshop and reading of "The Princeton and Slavery Plays."

During two developmental readings of the plays last summer, Morales enjoyed the opportunity to watch the playwrights and actors. "They were embodying historical figures I knew only through diaries, census records and newspaper advertisements, giving them life and personalities," she said.

Morales, whose research focuses on 19th-century United States history, African American history and the American West, said that the collaboration "has truly been one of the highlights of my five years working on the Princeton and Slavery Project. As a grad student, so much of my time is spent in library basements or hunched over my laptop. But after this experience, I feel inspired to bring some of the creativity and artistry the playwrights and actors have shown me into my own work as a historian."

"I hope that sharing the plays creates an even wider circle of listening backwards to the past — and imagining courageously forwards into the future," Guha said.

Mann's play, "Under the Liberty Trees," is set on the day the slaves who lived and worked at the residence (now Maclean House) of Reverend Samuel Finley — Princeton's fifth president — were sold. After Finley's death in 1766, the auction was held on the front lawn of the house, beside two young sycamore trees, now known as the Liberty Trees, or the Stamp Act Trees (Finley planted them to celebrate the repeal of the Stamp Act).

"I walk by th[ose trees] every day. Suddenly, to think of the Liberty Trees as this place where people were sold — that image alone and all the ironies it invoked brought me right into the story," said Mann. 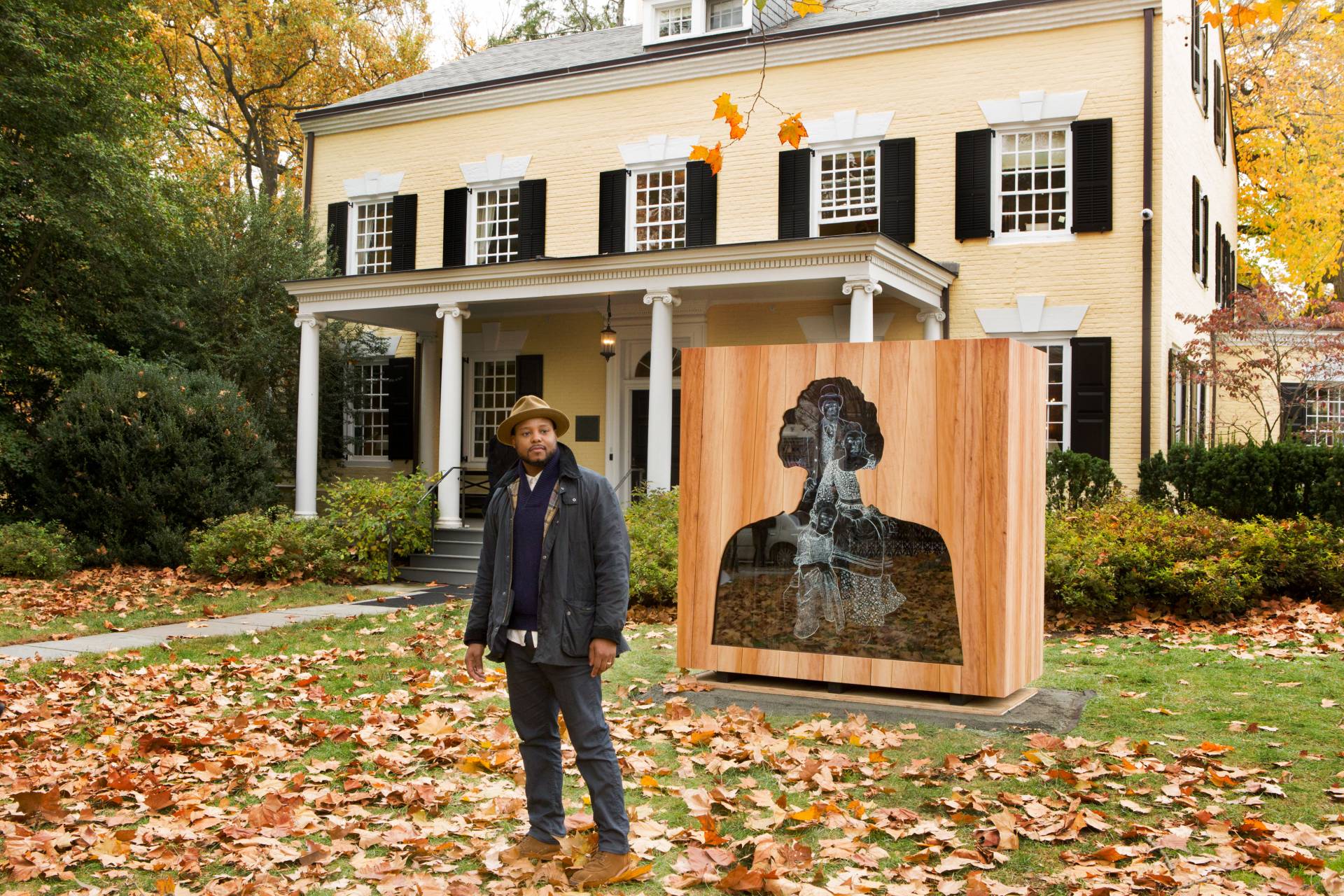 American artist Titus Kaphar is shown in front of his mixed-media work "Impressions of Liberty" on the lawn of Maclean House. The art installation is on view through Dec. 17 before it enters the collections of Princeton University Art Museum, which commissioned the work.

The auction of Finley's slaves is also the focus of an installation by American artist Titus Kaphar on view through Dec. 17 in front of Maclean House. The eight-foot-high mixed-media work, "Impressions of Liberty," features layered portraits of Finley and a black man, woman and child who represent his slaves. Commissioned by the Princeton University Art Museum, the work will return to the museum and enter its collections following the installation. 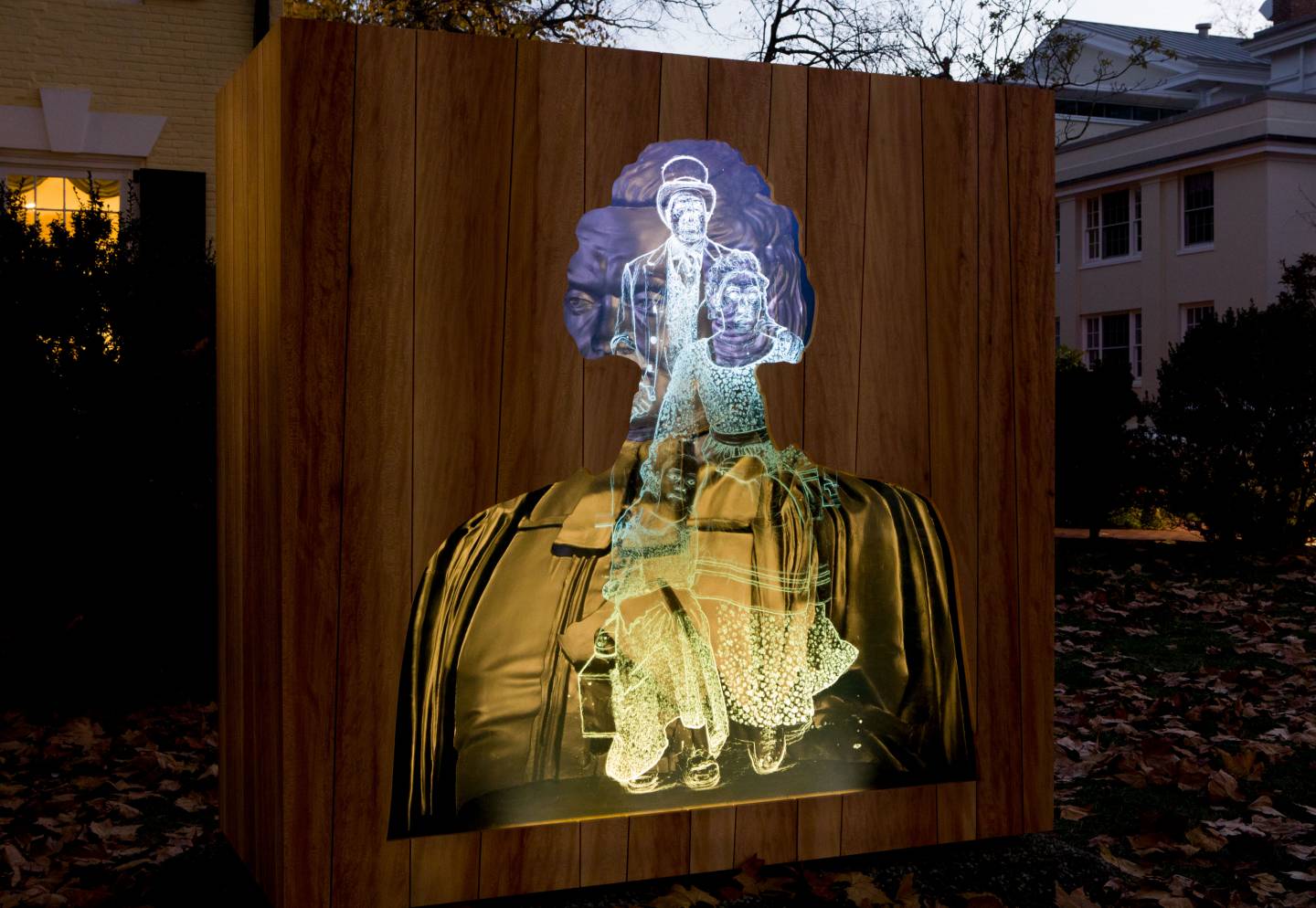 "Impressions of Liberty" transforms at nightfall with illumination from behind the artwork.

"Impressions of Liberty" has a composite portrait bust of Finley carved in negative relief, coated with a graphite façade and encased in sycamore wood, echoing the Liberty Trees near which it stands. Three actors dressed in costumes of period house servants are photographed as a symbolic slave family and appear in the foreground, in a life-size portrait etched in glass, overlaid on the carved portrait of Finley and illuminated from behind.

"I've always been fascinated by history: art history, American history, world history, individual history — how history is written, recorded, distorted, exploited, reimagined and understood," Kaphar said in an announcement from the art museum about the installation. "In my work I explore the materiality of reconstructive history. I paint and I sculpt, often borrowing from the historical canon, and then alter the work in some way."

The art museum also is presenting the exhibition "Making History Visible: Of American Myths and National Heroes," on view through Jan. 14, 2018. The exhibition brings together 18th- and 19th-century as well as modern and contemporary works — including works by Kaphar — to consider the ways in which artists have depicted American history, including the institution of slavery.

"Taken together these projects powerfully and articulately respond to the historical record of slavery at Princeton as only art can,” said James Steward, the Nancy A. Nasher–David J. Haemisegger, Class of 1976, Director. He noted that the installation "invites passersby to consider the hidden narratives and complicated role of our nation's early leaders. Indeed, it asks all of us to seek a full accounting of history and the legacy of that history — as well as the enduring power of images — in our own times."