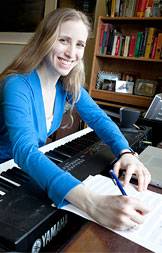 Andrea Grody’s senior thesis, an original musical titled "Strange Faces" about families dealing with Asperger’s syndrome, satisfies the requirements for her major in the Department of Music and her certificate in the Program in Theater. Grody, who wrote "Strange Faces" and is directing the production, has been involved in the campus theater community in all four of her years at Princeton.

As a girl dancing in her living room along to the cast recording of the show "My Fair Lady," Andrea Grody dreamed of the Broadway stage. Now, as a Princeton senior, Grody has written her own musical -- on Asperger's syndrome -- that will be performed this spring on campus.

Grody wrote the story and dialogue -- known in musical theater as "the book" -- along with the lyrics and music for "Strange Faces" to satisfy the thesis requirements for both her major in the Department of Music and her certificate in the Program in Theater. She grew interested in Asperger's, a condition related to autism that is characterized by significant difficulties with social interactions, through knowing someone who was diagnosed with the disorder.

Grody (left), who created and is directing "Strange Faces," works with two cast members, freshman Tadesh Inagaki (center) and junior Matt Prast (right), during a recent rehearsal. Grody has music directed or conducted about a dozen shows at Princeton, as well as serving as an actor and stage manager.

"It's an extremely ambitious project," said Stacy Wolf, an associate professor of theater in the Lewis Center for the Arts who has worked with Grody on the musical. "Princeton's Program in Theater is unique in our commitment to supporting the creation, production and performance of original, student-written and student-directed work. This kind of opportunity is typically one that doesn't happen until a student is in graduate school or in the professional musical theater world -- if then. Students here can truly expand as artists in every aspect of theater-making."

For Grody, who also is directing "Strange Faces," her four years at Princeton prepared her to pursue such a challenging undertaking. She directed her first show at the University her freshman year, a musical review performed by the student-run Princeton University Players, for which she later served as president. Getting that opportunity is one reason Grody, who is from West Hartford, Conn., is glad she chose to come to Princeton to study music, rather than attend a conservatory.

"At most conservatories freshmen don't get to even be in shows, much less direct," she said. At Princeton, she has music directed or conducted about a dozen shows, served as an actor and stage manager, and written for Princeton's oldest musical-comedy troupe, the Triangle Club.

"She knocked each and every one of these opportunities out of the park," said Tim Vasen, a lecturer and acting director of the Program in Theater, who advised Grody on her thesis. "So when she came to us with the idea of writing the book and score and directing a musical about Asperger's syndrome, we didn't blink, largely because she has shown, over and over, that she has the talent, technique and determination to pull something this ambitious off." 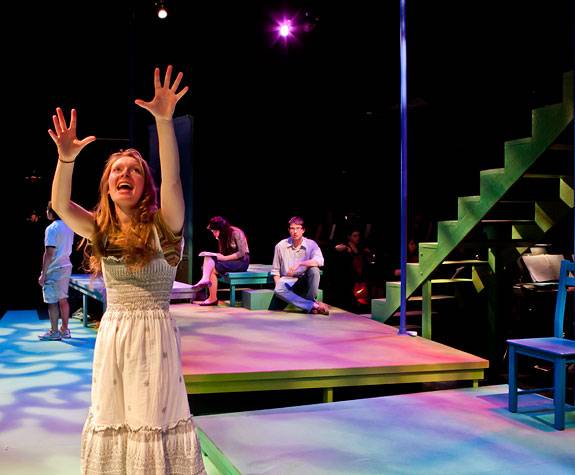 Sophomore Carolyn Vasko is one of seven cast members in "Strange Faces."

The experience of creating and putting on the show is invaluable for the future, said Grody, who hopes to one day have a career as a music director on Broadway. "The fact that this is my thesis is one of the best opportunities I could have," she said. "The faculty love letting people take chances on things that are risky for the sake of learning." 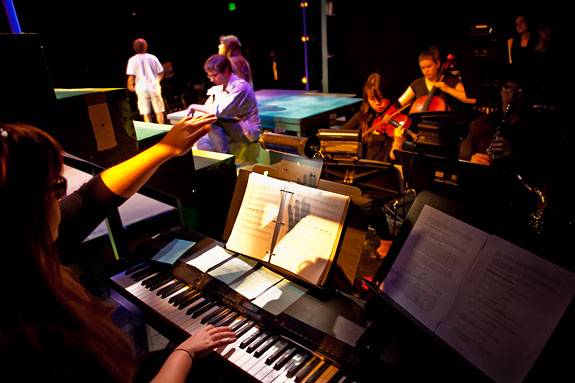 The music Grody composed for "Strange Faces" has parts for cello, clarinet, piano and violin. 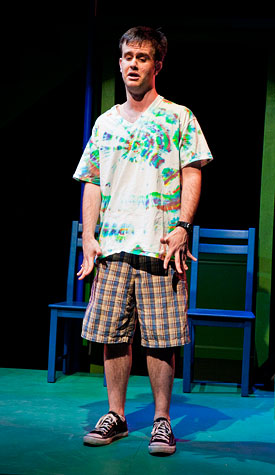 Freshman Sean Drohan portrays one of the characters in "Strange Faces," which depicts the childhoods of people with Asperger's, as well as the spectrum of the severity of cases.

In addition to classes in musical theater, opera and medieval music, Grody has taken several psychology courses. Her scholarly work informed her approach to writing "Strange Faces," as she based her method on the work of the Civilians, an acclaimed investigative theater company that performs shows developed using extensive research. Grody studied the group's work last year, when she took a course through the Princeton Atelier at the Lewis Center co-taught by Steve Cosson and Michael Friedman, who helped found the Civilians.

"Strange Faces" tells the story of three families, each with a member who has Asperger's. Grody interviewed children with Asperger's, as well as parents and siblings of those who have the condition. She also read memoirs and scholarly works on the topic. She wanted the musical to capture the childhoods of people with the condition, as well as the spectrum of the severity of cases of Asperger's. A cast of seven students will give five performances of the show (see below).

"People know what Asperger's is, but they don't really know how it affects people's lives," Grody said. "I hope the play teaches the audience something, but not in a preachy way."

The subject is well suited to a musical, Grody explained. "People with Asperger's want to connect with people the way others do," she said. "Music often can do that when words cannot."

Thesis productions to be staged in April

"Strange Faces," senior Andrea Grody's thesis production, will be performed Friday and Saturday, April 1-2, and Friday through Sunday, April 7-9. In addition, two other senior thesis productions will be performed as part of the Program in Theater's New Play Festival: "Make Belief," a comedy written by senior Mara Nelson-Greenberg and directed by lecturer Suzanne Agins, on Thursday, April 21, Saturday, April 23, Tuesday, April 26, and Thursday, April 28; and "Due Unto Others," a play written by senior M. Cristina Luzarraga and directed by senior Sarah Pease-Kerr, on Friday, April 22, Sunday, April 24, Wednesday, April 27, and Friday, April 29. All performances will be at 8 p.m. in the Matthews Acting Studio, 185 Nassau St. Tickets are $12 for general admission, and $10 for students and seniors. 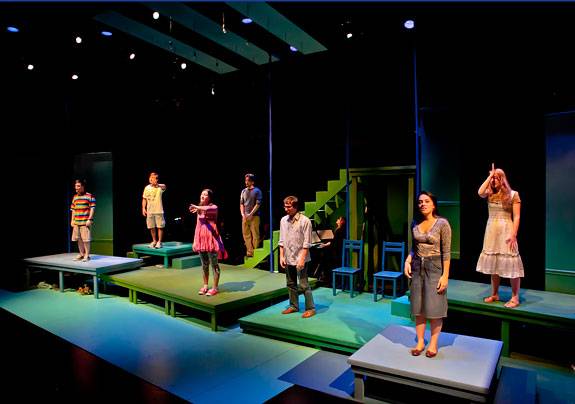