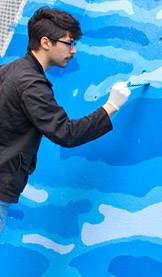 The paintbrush is a creative tool for learning that offers students a variety of ways to expand their Princeton experience. For example, undergraduates enrolled in "The Big Picture: Mural Arts in Philadelphia and Trenton," were involved in planning and executing a public mural in Trenton, N.J. The project was initiated two years ago to forge community partnerships in Trenton and the surrounding areas to broaden and enhance scholarship about how the arts have an impact on social justice issues and community collaboration. Member of the class of 2012 Alex Knoepflmacher, seen here, works on the early stages of the mural at the Home Rubber Company site in Trenton. 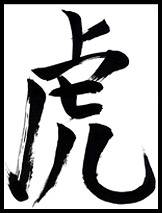 The course "East Asian Humanities I: The Classical Foundations" introduces students to 2,000 years of art, literature, philosophy and religion from China, Japan and Korea, starting in antiquity and ending in the 18th century. In addition to reading primary texts in translation, students in the course attend hands-on demonstrations of Japanese drumming and calligraphy. Here, the word "tiger" is written in Chinese characters by Tomoko Shibata, a lecturer in East Asian studies.

At Princeton, a paintbrush can be found in a student's hand in a range of settings far from the traditional art class. It can be seen being used to paint a mural as part of a community service initiative, or removing dust from an ancient relic, or recreating a form of lettering.

From freshman year to senior year and beyond, students and new graduates find that the paintbrush is a tool that can give expression to novel ideas, help address societal needs and even be used without paint. 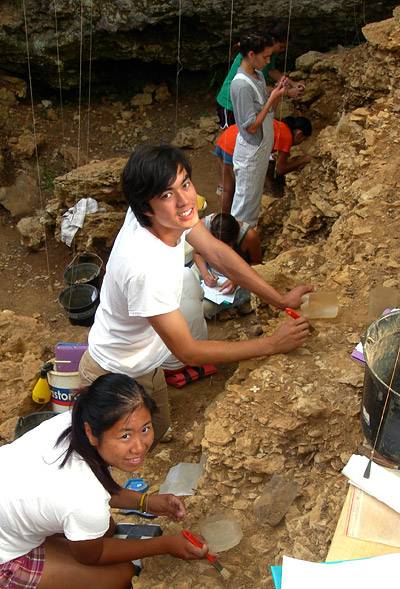 Rena Chen (foreground) and James Magagna, both members of the class of 2011, participate in the excavation of a site frequented by Neandertals during Professor of Anthropology Alan Mann's annual six-week summer course, "Modern Human Origins," which culminates in two weeks of field work in France. (Photo by Alan Mann) 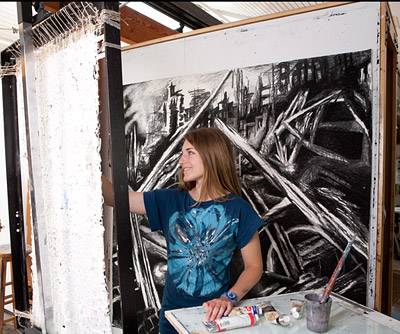 Julie Dickerson, who graduated from Princeton in 2010, received a Martin Dale Fellowship to create murals at hospital and shelters, and to start an art program. Rachael DeLue, an associate professor of art and archaeology who was one of Dickerson's senior thesis advisers, said of her Dale proposal: "In imagining her postgraduate project, she demonstrated her keen sense of how art might be made relevant beyond the studio." (Photo by Brian Wilson)

As part of the Community Action pre-orientation program in 2008, then-freshmen Risa Reid and Dale Mack (from left), along with junior Clelia Douyon, applied fresh paint to the 19th-century Italianate villa that serves as the home to the Ellarslie Museum in Trenton. Community Action provides entering freshmen with their first opportunity to perform community service upon arriving at Princeton. (Photo by Brian Wilson) 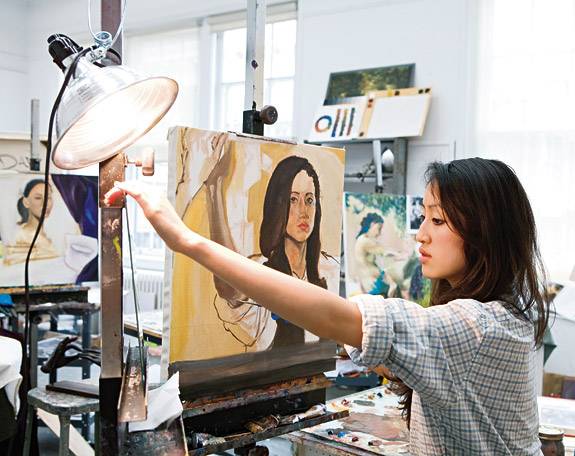 Dinah Chen, a member of the class of 2011, works on a self-portrait in one of the fine art studios at 185 Nassau St. The Program in Visual Arts introduces students to the studio arts in the context of a liberal arts education. (Photo by Brian Wilson)