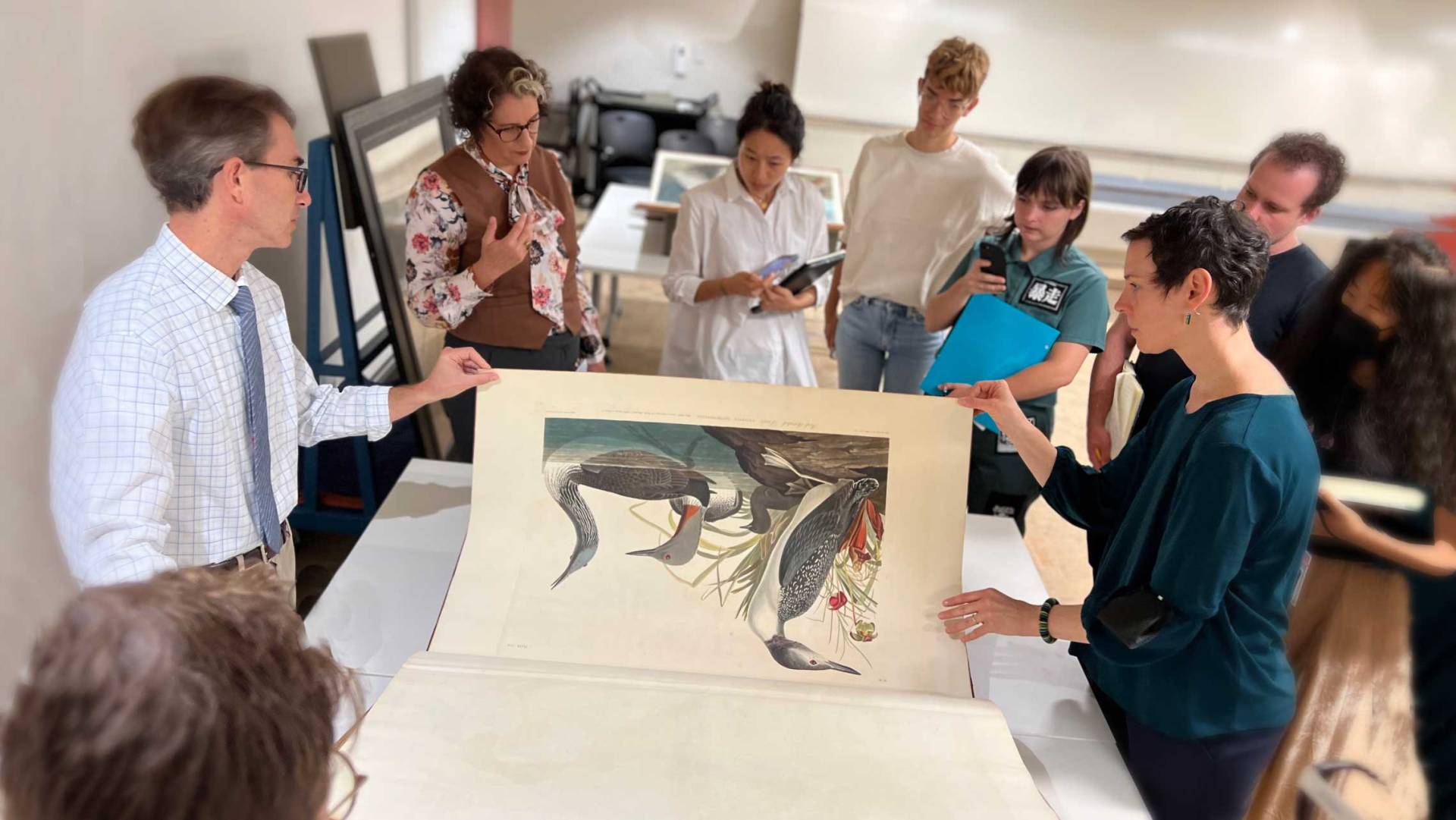 How art by Audubon, Darwin and others influenced science: Insights from a Princeton course

How did John James Audubon, Charles Darwin and early image makers across Europe and North America nail down the “truths” of the natural world in their renderings? The course “Seminar in American Art: Science and Its Fictions in the Long 19th Century” is a visual journey in the history of that endeavor. 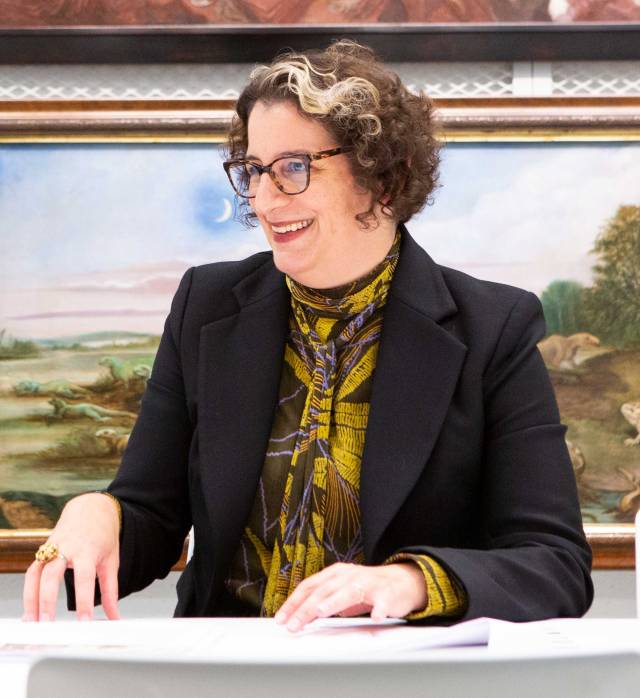 “In this course, students gain the ability to approach their image world critically — to be smarter than the images that inundate them,” said Rachael DeLue.

Through visits to Princeton University Library’s Special Collections and Princeton University Art Museum’s offsite study room and on-campus study room at Firestone Library, as well as trips to the American Museum of Natural History and the Metropolitan Museum of Art in New York, students are evaluating a fascinating pool of artworks created from approximately 1750 to 1915, and some earlier.

In the pursuit of scientific knowledge, image makers in the late 18th and 19th centuries often relied on speculation, for lack of observation, and were content with plausibility. Conrad Gessner’s “Historia Animalium,” the first modern zoological work that attempts to describe all the animals known, includes a unicorn as well as a fictitious bird of paradise drawn largely from imagination.

“Images are able to ‘fabulate’ in a way that is distinct from other media, a capacity that gives them a special capacity to conjure understanding,” said Rachael DeLue, the Christopher Binyon Sarofim '86 Professor in American Art, chair of the Department of Art & Archaeology, and professor of art & archaeology and American studies. 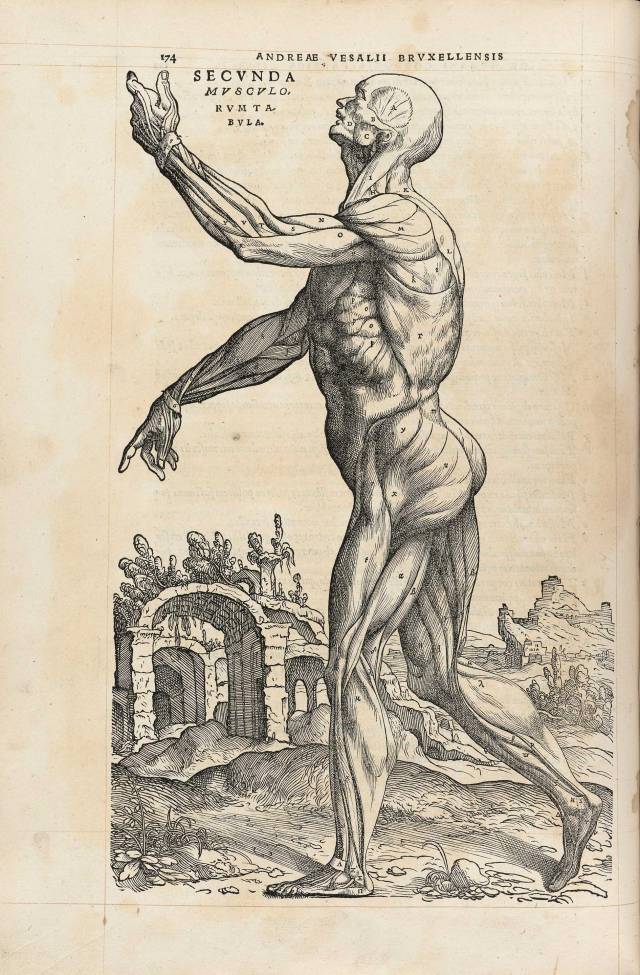 In Princeton University Library’s Special Collections, students examined Andreas Vesalius’ 16th-century treatise “De Humani Corporis Fabrica Libri Septem” — in which his precise illustrations of dissections rendered the human body in a way it couldn’t be seen in real life, laying the foundation for the modern scientific study of human anatomy.

Students also examined the collection’s rare copy of Gessner’s “Historia” and the oversized illustrations in Audubon’s iconic work “The Birds of America.” While Audubon rendered his subjects from observation, he did not paint them in their natural habitat; his method was to shoot them and then “fictionalize” them back to life on the page.

In Princeton University Art Museum’s offsite classroom, students viewed five 19th-century paintings of dinosaurs by Benjamin Waterhouse Hawkins. Needless to say, Hawkins relied on speculation in his renderings when he depicted what have become classic dinosaur stances and skin colors (green or grey). His dinosaurs exemplified the power of images to establish presumed knowledge at the time.

“Images and visual objects are really different in their properties and characteristics than texts,” DeLue said, “which means students can leave the more familiar zone of textual analysis and ask, ‘What can images communicate that words cannot?’ In this course, students gain the ability to approach their image world critically — to be smarter than the images that inundate them.”

The class also considers the ways that fictionalized “knowledge” in other early renderings were used to substantiate racist ideologies. 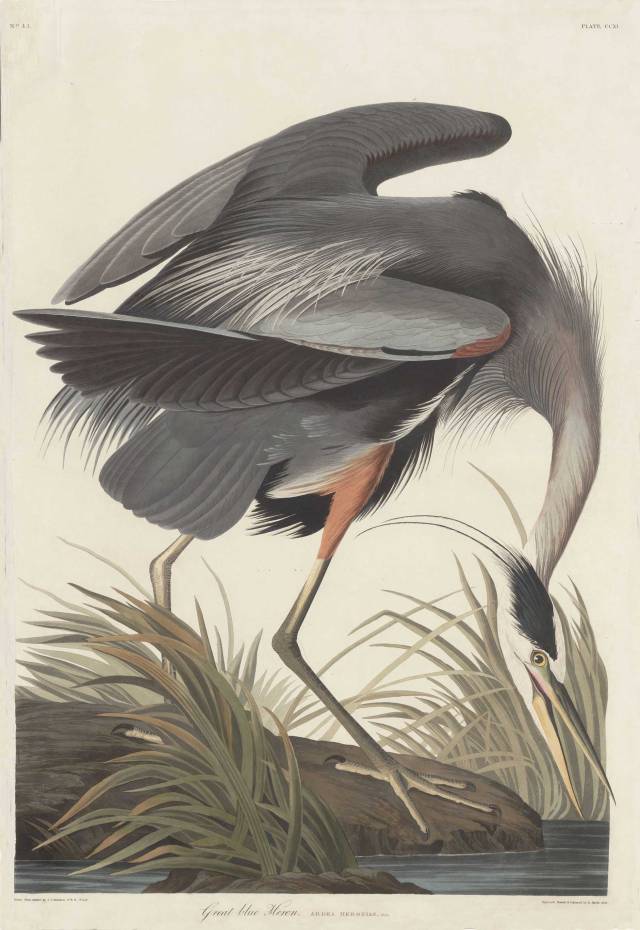 One of the images the students evaluated is a segment of a panorama commissioned by amateur archaeologist Wilson Dickeson to depict his excavation of a Native American burial ground; it was painted by John Egan circa 1850. While the artwork intends to draw on ethnology and archaeology, DeLue encouraged students to reflect on how the scene of desecration might fictionally position Native Americans as a culture that has no place in the present.

In some cases, the attention given to the meticulous rendering of an image masks the unscientific claims it makes. DeLue cited the example of Samuel Morton’s “Crania Americana,” in which images of human skulls are intended as pseudo-scientific arguments distinguishing racial “types” and thereby justify the institution of slavery in the United States. “Here’s where we can talk about fiction in science, about how an illustration based in observation and rendered with near-photographic accuracy can spin a totally fictitious tale about human hierarchies,” she said.

“This is a work that purports to be scientific,” said Andrew Kensett, a graduate student in art & archaeology. “But in fact, like so many of the visual objects we’ve studied in the course, it’s a complex admixture of fiction, ideology and aesthetics. Our work is to distill that mixture down and separate out its constituent elements.”

Visual literacy is an essential skill in any field, said DeLue, who is teaching the course for the first time. The class drew students from across academic disciplines. 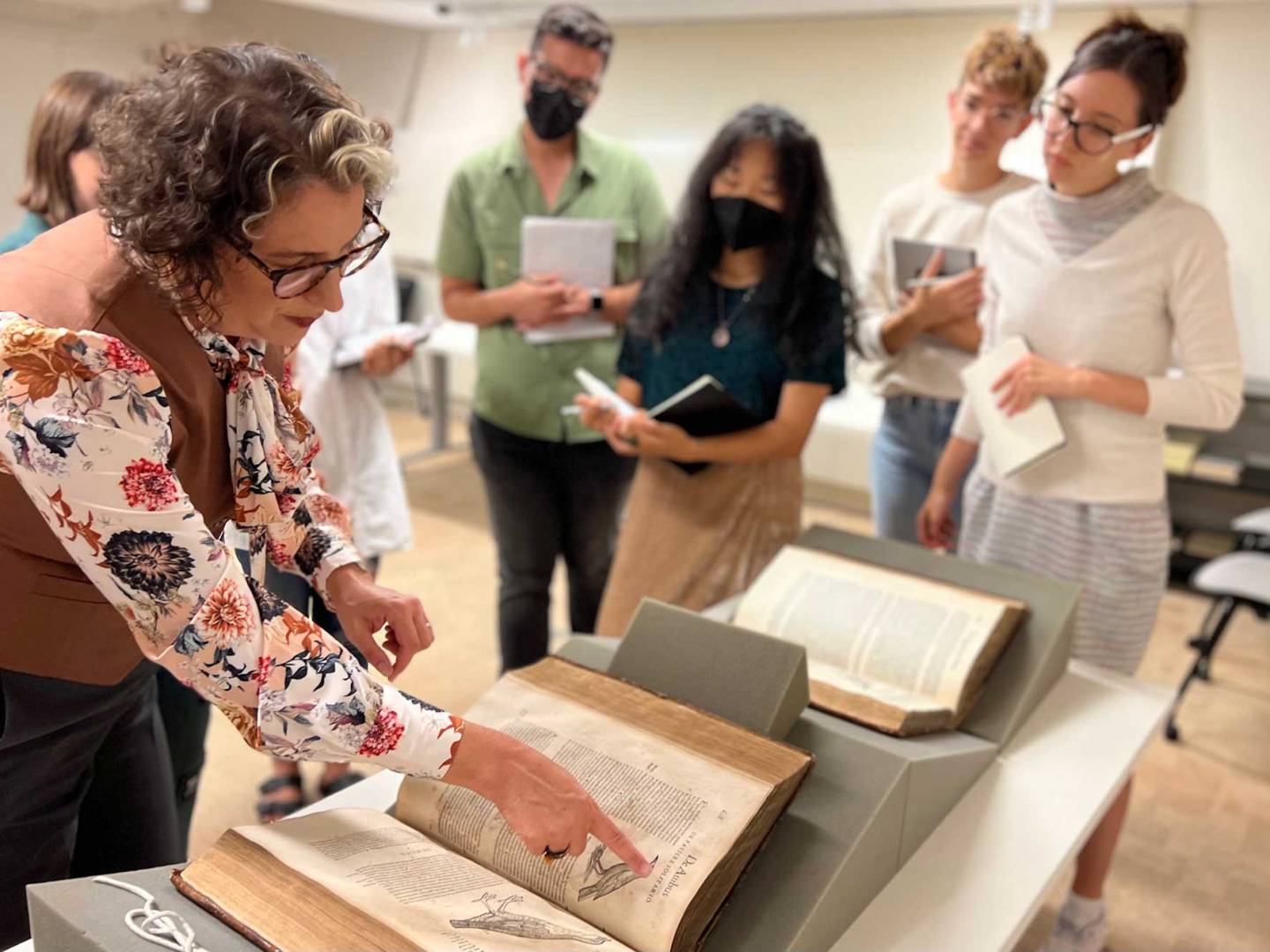 “I wanted to take this class to get more skills on ‘reading’ visual texts,” said senior Wendi Yan, a history of science concentrator who was able to enroll in the graduate seminar this fall with special permission. A visual text is an image that is meant to convey knowledge. “In the 19th century especially, the ‘sciences’ were much more reliant on visual forms to help articulate their thoughts and theories,” she said.

Maxwell Smith-Holmes, a graduate student in the history of architecture, said he chose the course to understand how knowledge is produced through art, architecture and landscapes.

“Students who come from other disciplines, for example, the sciences, often bring to the table a new perspective from their disciplinary home,” DeLue said. “No matter how well I know, say, a painting — even one I’ve published on! — they point out things that I hadn’t registered previously.”

“Thinking about the relationship between scientists and their audiences couldn’t be more important in the current climate,” said Charlotte Adamo, a Class of 2022 ecology and evolutionary biology concentrator who took a similar course about art, science and knowledge with DeLue and her co-instructor Bridget Alsdorf, professor of art & archaeology, as an undergraduate and is now a graduate student at the University of Cambridge. “I’ll be starting medical school in September 2023, and I know I’ll value skills I developed in this course, such as an increasingly critical eye and an interrogation of claims to scientific objectivity, power and knowledge.”

Julia Curl, a graduate student in art & archaeology and art reviewer for Hyperallergic, said the course has prompted the realization that no images are ever truly neutral. “Since I study the history of photography, this is a particularly fruitful insight, because there are so many enduring myths about photography’s ‘objectivity’ and its supposed ability to create an uninflected or authorless perspective,” she said. “I’ve learned to ask how such images perform neutrality.”

“I’m hoping that students can walk away equipped with new and imaginative modes of thinking about and theorizing their own objects of inquiry and with big-picture or fundamental questions that they can bring to their material to galvanize original thinking about it,” DeLue said. “I want them to see how approaching forms of visual expression from any period and of any media can be illuminated by the approaches modeled in the class.” 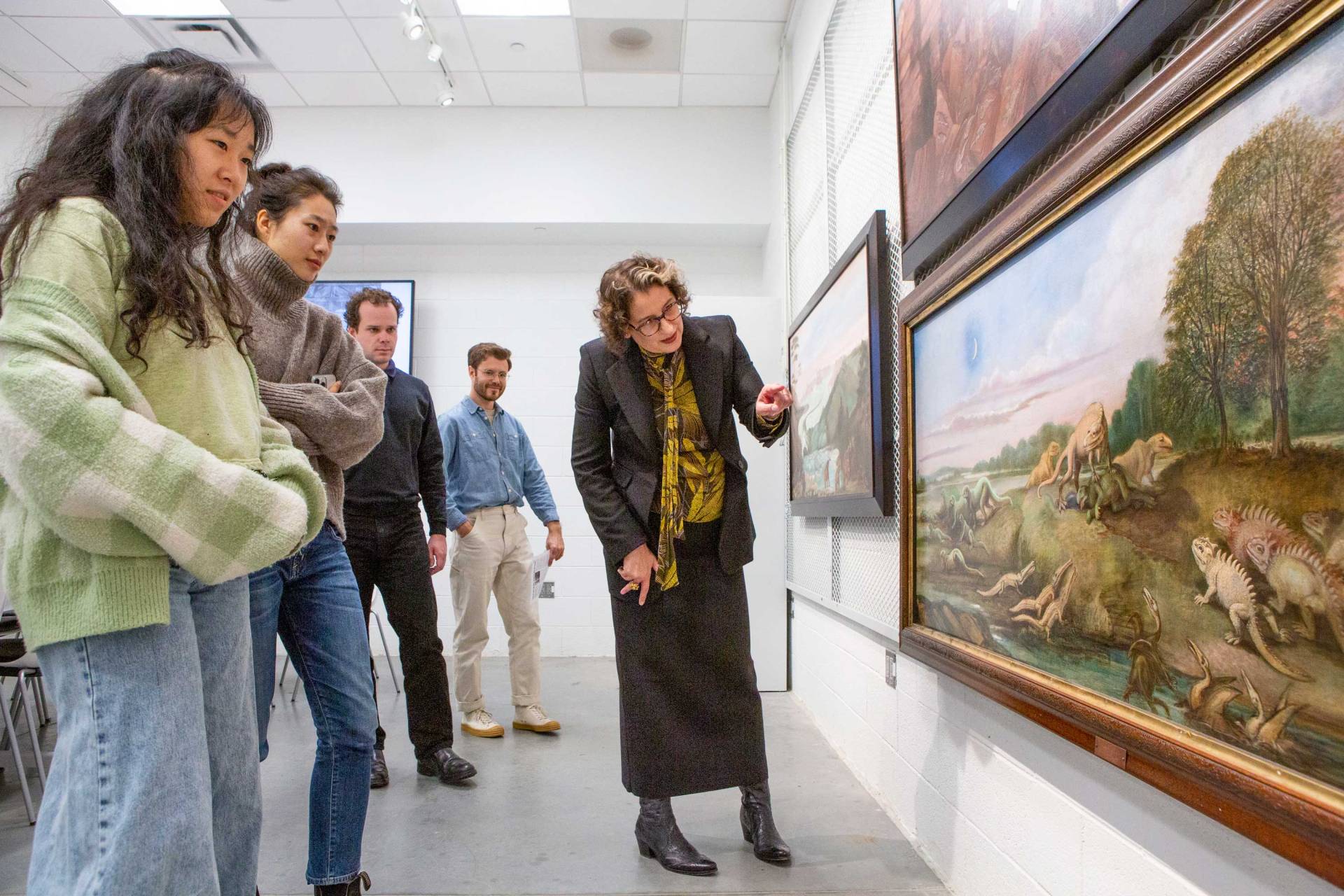