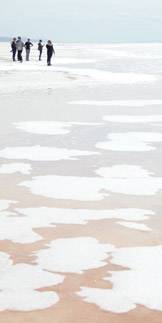 On April 11, students in "Seminar in American Art: Terrains of Knowledge" visited Robert Smithson's "Spiral Jetty" on Utah's Great Salt Lake. "On the day of our visit, we were extremely lucky — the sun shone brightly on the water, which is tinged an otherworldly pink by red-pigmented algae and purple-hued bacteria sturdy enough to survive the hypersaline waters," said Kemy Lin, Class of 2015.

This week, News at Princeton is focusing on graduate students, a diverse community of nearly 2,700 master's and doctoral students, with stories on the resident graduate student program (Monday), a student pursuing engineering and music (Wednesday), and an art and archaeology class's recent trip to Utah (Friday).

One day in April, Rachael DeLue, an associate professor of art and archaeology at Princeton, held class outdoors — on the north shore of the Great Salt Lake in Utah.

She and the 15 graduate and two undergraduate students in the class "Seminar in American Art: Terrains of Knowledge" took a weekend trip to see "Spiral Jetty," a monumental site-specific earthwork built in 1970 by Robert Smithson. The trip was funded by the David A. Gardner '69 Magic Project and the Council of the Humanities.

Smithson was a member of the Land Art movement, a group of artists who, DeLue explained, rejected the idea of a work of art as a commodity that can be bought and sold and housed in a gallery or museum; instead, they used land to make art. "Smithson allowed the landscape and ecosystem of the Great Salt Lake to help him imagine what he would build there," DeLue said.

By studying artwork from the late 16th through the 20th centuries and through a range of readings, students in the class learn how actual landscapes get translated into representations — maps, photographs, paintings, land art. "Making an image of the land has always been a matter of communicating knowledge," DeLue said. "We consider a diversity of visualized 'terrains' that are created when nature is translated by humans into a kind of container for knowledge."

She said she hopes the trip to "Spiral Jetty" helped students understand how essential it is to experience a work of art in its intended setting. "It's the difference between looking at works of art and being with them — having a kind of transaction with them, which is impossible with a photograph. Our trip to 'Spiral Jetty' was profound and transformative."

In the photo essay below, DeLue and her students capture the experience through images and words. 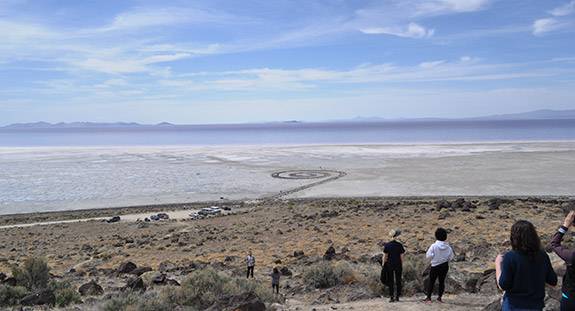 "Spiral Jetty" — a 1,500-foot-long, 15-foot-wide amalgam of rock, earth and salt — is an iconic earthwork built directly into the lakebed from materials found on site. The now-closed Dwan Gallery in New York paid for the construction and the lease of the land; a local construction company provided the labor and equipment. On the day of our visit, the waters had receded hundreds of feet, leaving the Jetty surrounded by an expanse of salt crystals and sand. (Photo and caption by Natalie Dupecher, graduate student, Department of Art and Archaeology) 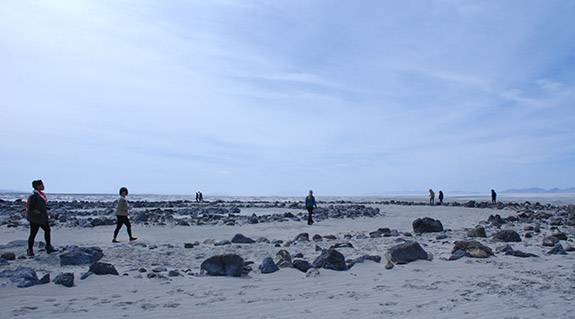 Everyone begins walking along the Jetty. Some of us continue along the full length of the spiral, while others depart from the set path to wander the ground in between and outside the Jetty. From a distance, I see that the earthwork continued to organize our movement beyond its boundaries, winding us through the landscape. (Photo and caption by Lee Colón, graduate student, Department of Art and Archaeology) 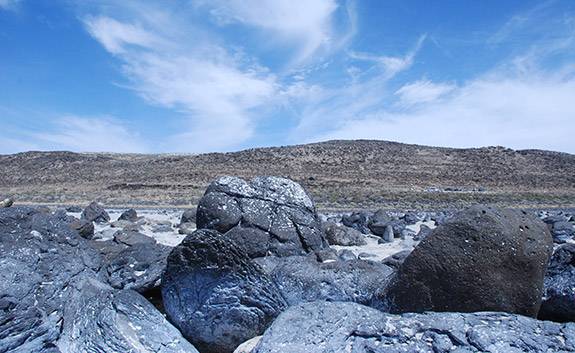 The black basalt rocks that make up the Jetty are the remains of Pliocene lava flows erupted from small local volcanoes. Vast sheets of molten rock have broken over millions of years to form discrete stones, giving the region a shattered, pulsing appearance that Smithson, writing about the site, contrasted to the rock-still lake. The basalt also discloses recent history, with salt lines marking fluctuations in water level over the last 45 years layered onto these material testimonies of the region's vast geologic timeline. (Photo and caption by Lee Colón) 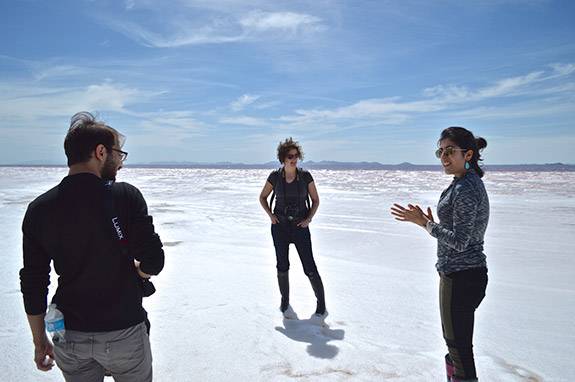 By encouraging us to explore freely and creatively the surrounding space, Professor DeLue (center) imbues our visit with a sense of discovery. In this photo, we and Shota Vashakmadze (left), a graduate student in the School of Architecture, investigate the properties of the salt crystals we find erupting from the water-soaked, sandy ground, discussing how these crystal growths inform our perception of the landscape. (Photo by Kemy Lin; caption by Kimia Shahi, graduate student, Department of Art and Archaeology) 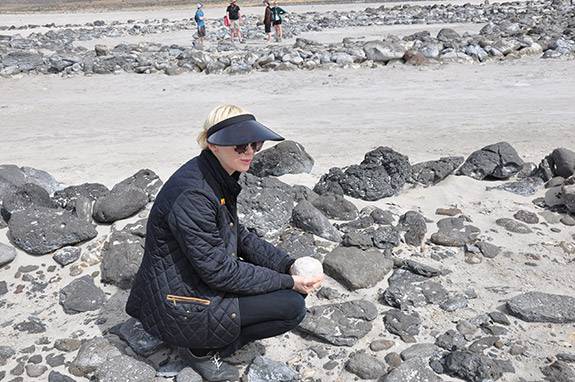 Coming across a hefty yet palm-sized rock, I pick it up. Sand rattles in the depths of a system of tiny caverns woven through the rock. A minuscule spider emerges, unaware of me. White dots on the rock's surface are actually pits filled with dried salt. Because "Spiral Jetty" and the Great Salt Lake environment are completely unfamiliar to me, this rock offers a condensed version of the vast, strange space at a scale I can wrap my head around. (Photo by Rachael DeLue, Department of Art and Archaeology; caption by Melissa Frost, graduate student, School of Architecture) 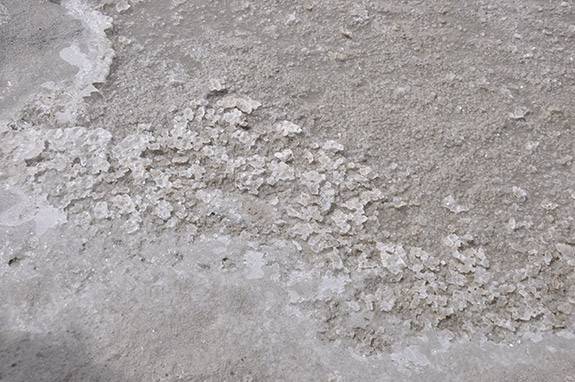 The Great Salt Lake has no outlet. Water from three rivers pours in, but exits only through evaporation, leaving behind minerals including salt — about 2 million tons a year. The lakebed is transformed into a shimmering, strangely ice-like crust pockmarked with small craters and adorned with crystalline growth. Calling to mind a miniature garden rising from the sandy surface, this striking pattern of organic growth helped shape Smithson's understanding of "Spiral Jetty," which he envisioned as a collaboration between himself as an artist and the natural processes particular to the site. (Photo and caption by Rachael DeLue) 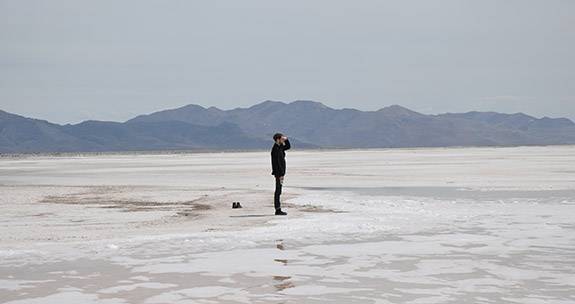 I stand on the shore after traversing a surreal landscape that places basalt and limestone, oolitic sand formed from calcified brine shrimp offal, and salty waters at all stages of evaporation underfoot. My eyes trace, in sequence: the lake's foamy edge; a swath of ever-changing red-pink algae washing up against it; the lake's far shores; and, finally, the horizon. The Jetty's spiraling curves expand to resonate with the horizon and, in turn, the horizon's distant edge collapses in a twisting heap, pulled toward the center of Smithson's earthwork. (Photo by Rachael DeLue; caption by Paul Ruppert, graduate student, School of Architecture) 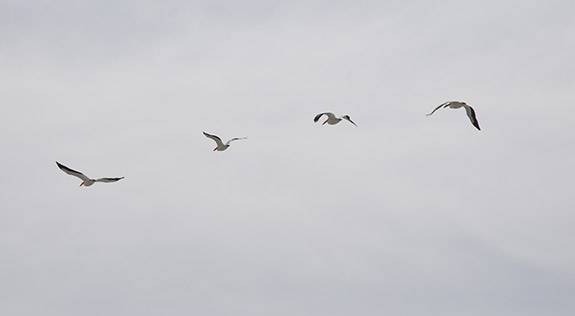 The Great Salt Lake boasts a complex ecosystem. Among its inhabitants are brine shrimp, brine flies, salt-adapted microbes and dozens of species of migratory birds. The flight of four American White Pelicans mesmerizes us. Among the heaviest birds in North America, the pelicans appear as light as the air through which they fly. Their skybound circling roughly echoes the Jetty's spiral, and they sometimes seem to disappear into the hazy white backdrop of the partly cloudy sky, only to reemerge, suddenly, when the sun's rays make the white feathers blaze with light. (Photo and caption by Rachael DeLue)

Natalie Dupecher (crouching), Kimia Shahi (right) and I discover that the exposed salt flats contain microscopic ecosystems. Although walking along the Jetty orients our gaze to the vast openness of the terrain, the magnetic pull of the spiral of rocks is replaced by the urge to crouch down and look, intimately, at the world of salt and sand growing underfoot like a living, breathing thing — precious and fragile, but also strong and resilient. (Photo by Rachael DeLue; caption by Perrin Lathrop, graduate student, Department of Art and Archaeology) 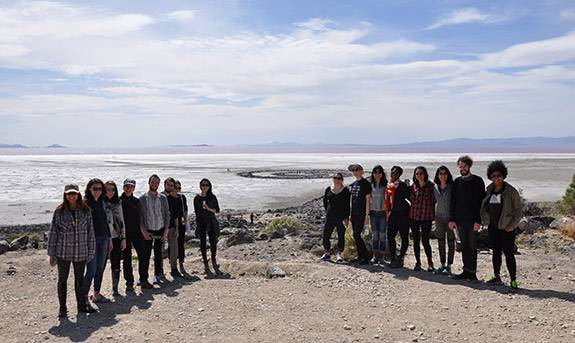 It is an inimitable pleasure to experience "Spiral Jetty" with a group of students so invested in and curious about the history of transformations of landscape into art and knowledge, the subject of the course. Every moment of the trip, from our examination of the lakebed's wondrous salt crystal formations to wading into the reddish-pink and salt-foam studded waters of the lake, was in equal parts edifying and enormously fun. (Photo and caption by Rachael DeLue)