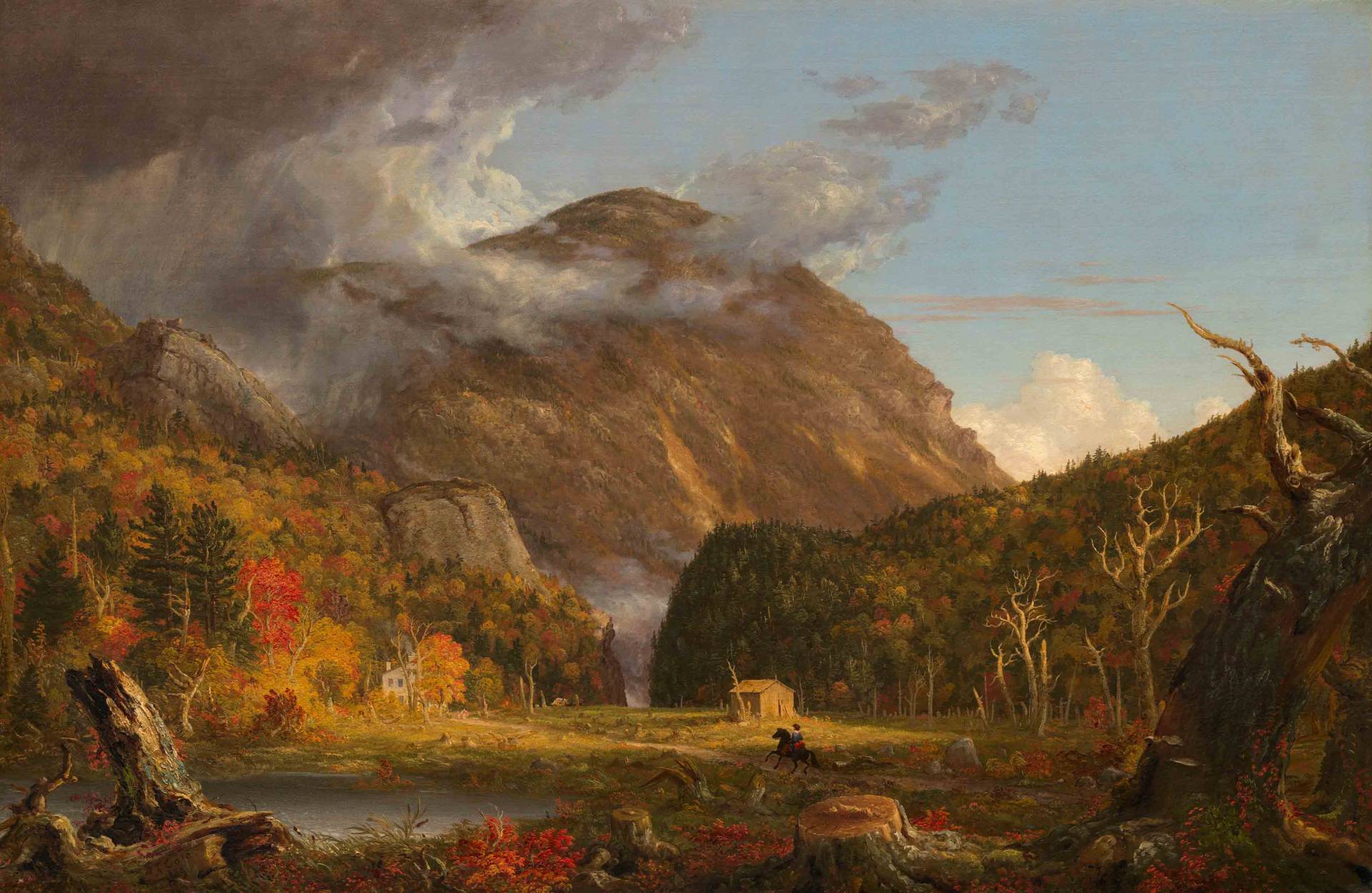 "Nature’s Nation: American Art and Environment," on view Oct. 13, 2018-Jan. 6, 2019, at the Princeton University Art Museum, explores how American artists of different traditions and backgrounds have reflected and shaped environmental understanding and our changing relationship with the natural world. The exhibition features more than 120 works of art from the colonial period to the present. Pictured: American landscape painter Thomas Cole's 1839 painting "A View of the Mountain Pass Called the Notch of the White Mountains" (Crawford Notch). Oil on canvas, National Gallery of Art, Washington, D.C.

When landscape artist Thomas Cole visited New Hampshire's White Mountains in the summer of 1839, he sketched the telling signs of deforestation and human encroachment on a once-pristine wilderness. But his final painting depicted a relatively unspoiled tableau, featuring rich forests and weather-blasted trunks.

Cole employed a bit of 19th-century photoshopping to edit out signs of development. He dialed up the scenic foliage and blurred the signs of human habitation — houses, barns, roads. His paintings spoke of a world where humans and nature could coexist.

Artists do more than reproduce the world around us. They also, for reasons from artistic to commercial to ideological, shape our perspective on the environment and our relationship with it.

The power of art to influence our understanding of the environment is the focus of a major new exhibition, “Nature’s Nation: American Art and Environment,” which opens at the Princeton University Art Museum on Oct. 13. The exhibition, which is accompanied by faculty panels, public lectures and gallery tours, brings together more than 100 pieces of American art to tell the story of ecological change in North America over 300 years of history. It is on view through Jan. 6, 2019.

In addition, a number of public events are planned, including a faculty panel, public lectures from leading environmentalist authors, and gallery tours and talks.

Through the selection of works on display and an accompanying 448-page catalog, the exhibition addresses how artists in America have interpreted the environment over the centuries — from the era of exploration and colonialism through U.S. nationhood and expansion to the growing awareness of profound human impact on a global scale. The show also features recent artists whose work exposes environmental injustice and the global scale of environmental change.

"We wanted to create an exhibition that would tell an alternative history of American art and chart the development of modern ecological consciousness — the understanding that nature is neither preordained nor immutable, but interconnected and fluid," said Karl Kusserow, the John Wilmerding Curator of American Art at the Princeton University Art Museum. He is teaching a fall course on the exhibition called "Exhibiting 'Nature's Nation'" American Art, Ecology and Environmental History." Other courses, such as "Wilderness Tales," taught by Diana Fuss, the Louis W. Fairchild '24 Professor of English — which explores a diverse literary tradition encompassing survival sagas, pioneer stories, adventure tales and more — include a visit to the exhibition.

The exhibition's co-curator is Alan Braddock at the College of William and Mary, where he is the Ralph H. Wark Associate Professor of Art History and American Studies. He was also the Princeton Environmental Institute's Currie C. and Thomas A. Barron Visiting Professor in the Environment and the Humanities in 2016-17, as well as a Princeton Belknap Visiting Fellow in the Humanities Council in fall 2014.

"Artists have always made pictures of their world, but only in the last 300 years have we realized that humans are changing the world in significant and even unprecedented ways," said Braddock, who is a pioneer in the field known as ecocriticism, the study of the ecological significance of art, literature and other forms of expression.

"Art has the power to help us understand these issues and inform our ethical and moral decisions," Braddock said. "It also alerts us to issues of environmental justice and ecological inequity, since not everyone perceives places and conditions in the same way."

When European colonists arrived in North America, massive trees covered the land. Risks abounded, from swamps and new diseases to conflicts with indigenous peoples. Yet the continent was also bountiful with fish, game and timber.

Early works, published in the 1590s to attract colonists, depicted the continent as a peaceful and orderly land just waiting to be colonized. Throughout the colonial period, the subjugation of the environment and its aboriginal population was rarely portrayed in works of art. Landscapes, when they did exist, appeared as the backgrounds of wealthy colonists' portraits and consisted of manicured gardens and serene vistas. 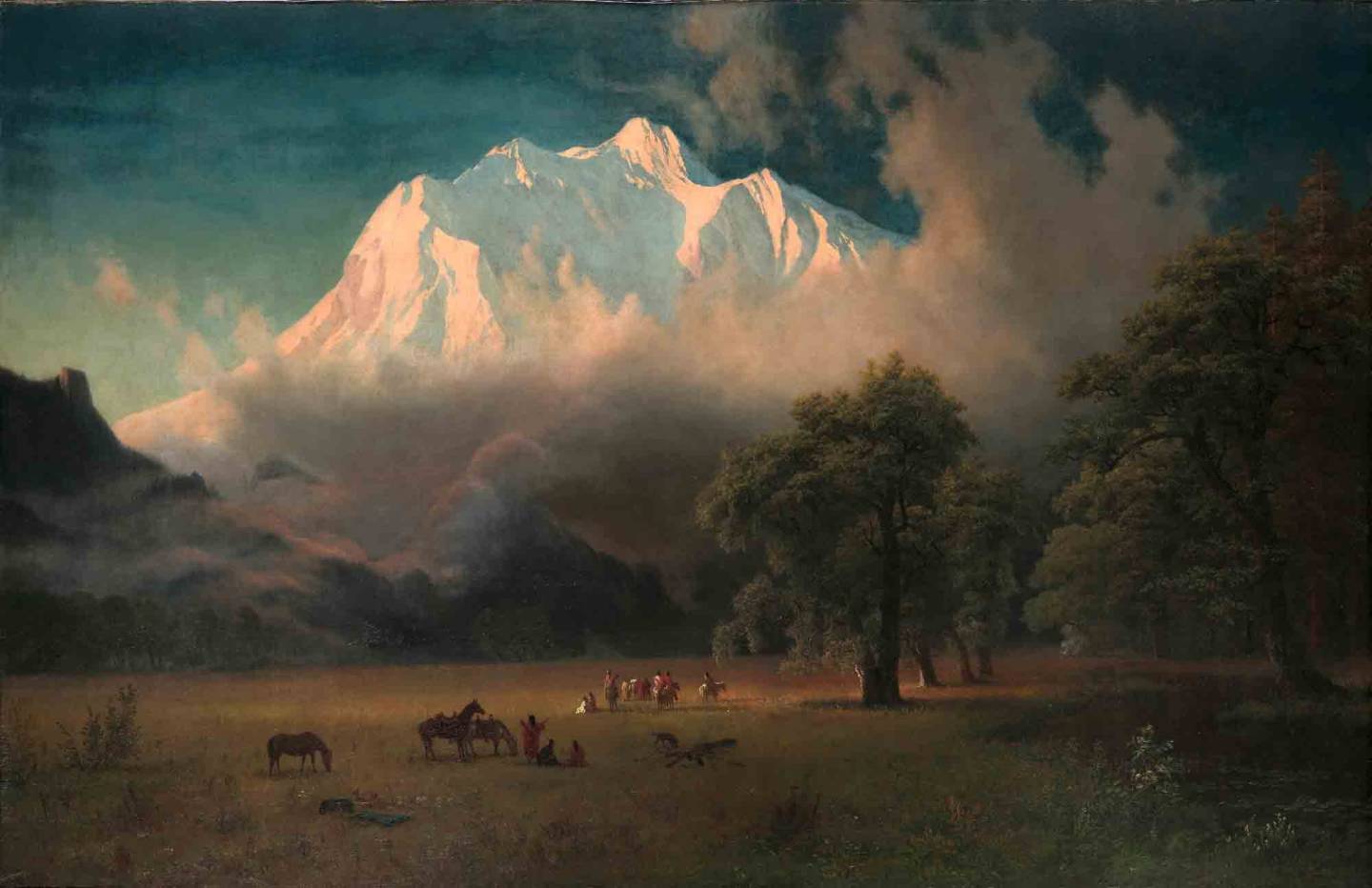 By the 1800s, however, American sentiment was changing. Many in the U.S. population, largely based in the Northeast, lamented the loss of wilderness, as documented in popular novels such as James Fenimore Cooper's 1826 novel, “The Last of the Mohicans.”

A painting style known as "picturesque" then popular in Europe and America imposed order on wild nature while preserving its beauty. Artists placed rocks and trees in the foreground of the painting to give a sense of depth. The vistas unfurled in a logical, stepwise progression, with water bodies, promontories and mountains stretching into the distance.

American landscape painters, especially those in the group known as the Hudson River School because of their style and focus on upstate New York, embraced the picturesque. Long after the style grew out of fashion in Europe — replaced by a more realistic depiction of nature — it continued in the works of American artists, including in Western landscapes such as those by Thomas Moran, whose painting "The Grand Canyon of the Yellowstone" celebrated the nation's first national park in 1872 and was later used to attract tourists and settlers. 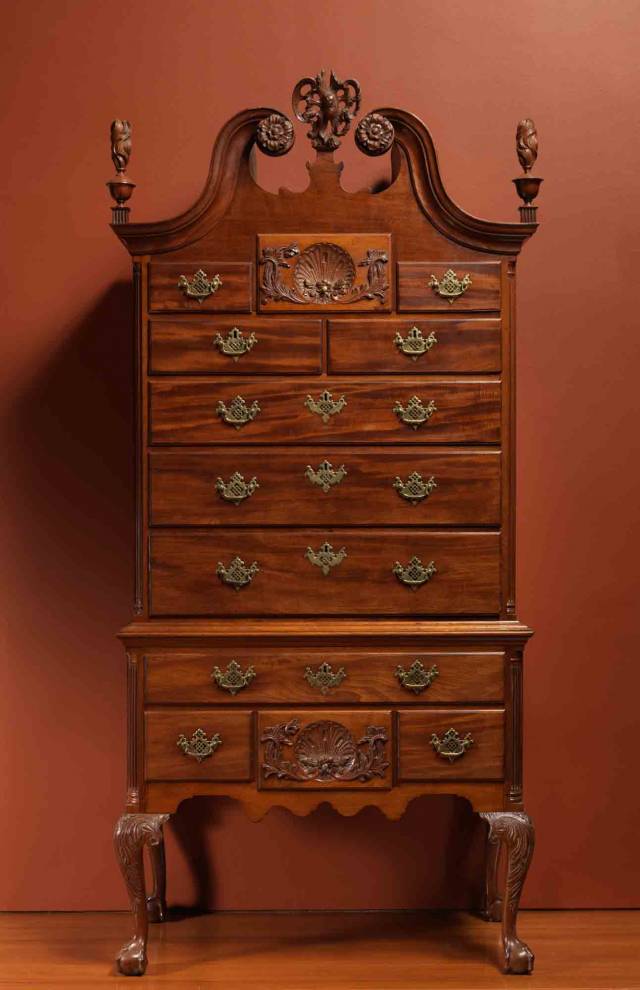 "Wilderness was seen as overwhelming, threatening and scary," Kusserow said. "To facilitate nation building in the 18th and 19th century, it was necessary to picture land as tractable and accessible to development."

Through their very materials, artistic works embody environments. The material origins of art can reveal the ecological and societal conditions of the past, said Laura Turner Igoe, an art historian who conducted investigations as part of the “Nature's Nation” exhibition while a postdoctoral researcher at Princeton.

One item Igoe examined, with help from materials scientists, was an 18th-century chest of drawers crafted in Philadelphia. Ornate and regal, the chest is made of mahogany from Jamaica, brass drawer pulls from England, American tulip poplar and white cedar framing, and varnish from North Africa.

The team determined that the mahogany had come from Jamaica in the mid-1700s, when European colonists used slaves to clear forests and build sugar plantations.

"The construction of the chest implicates peoples and environments all over the globe, and through this analysis we were able to recover some of this lost history," Igoe said.

Art has the power to help us understand the environment — to take scientific data and turn it into "emotional data," said Rob Nixon, Princeton's Thomas A. and Currie C. Barron Family Professor in Humanities and the Environment and a professor of English and the Princeton Environmental Institute.

For “Nature's Nation,” Nixon explored a work by American photographer Chris Jordan, from the series “Midway: Message from the Gyre,” 2009. It is a photo of a decaying corpse of a baby albatross, its insides stuffed full with plastic bottle caps that its mother scooped up from the miles of floating detritus in the Great Pacific Garbage Patch and ladled into its hungry chick's beak. The image contrasts the revered values of nourishment and procreation against the practices of today's throw-away society.

Nixon said that images like these help the public make sense of complex issues like pollution, climate change, habitat loss and food security. "We constantly are faced with a cascade of data and metrics about the urgency of these issues," Nixon said, "but how do we translate and reconfigure these data in ways that reach people emotionally? I see that as very much germane to the spirit of this project." 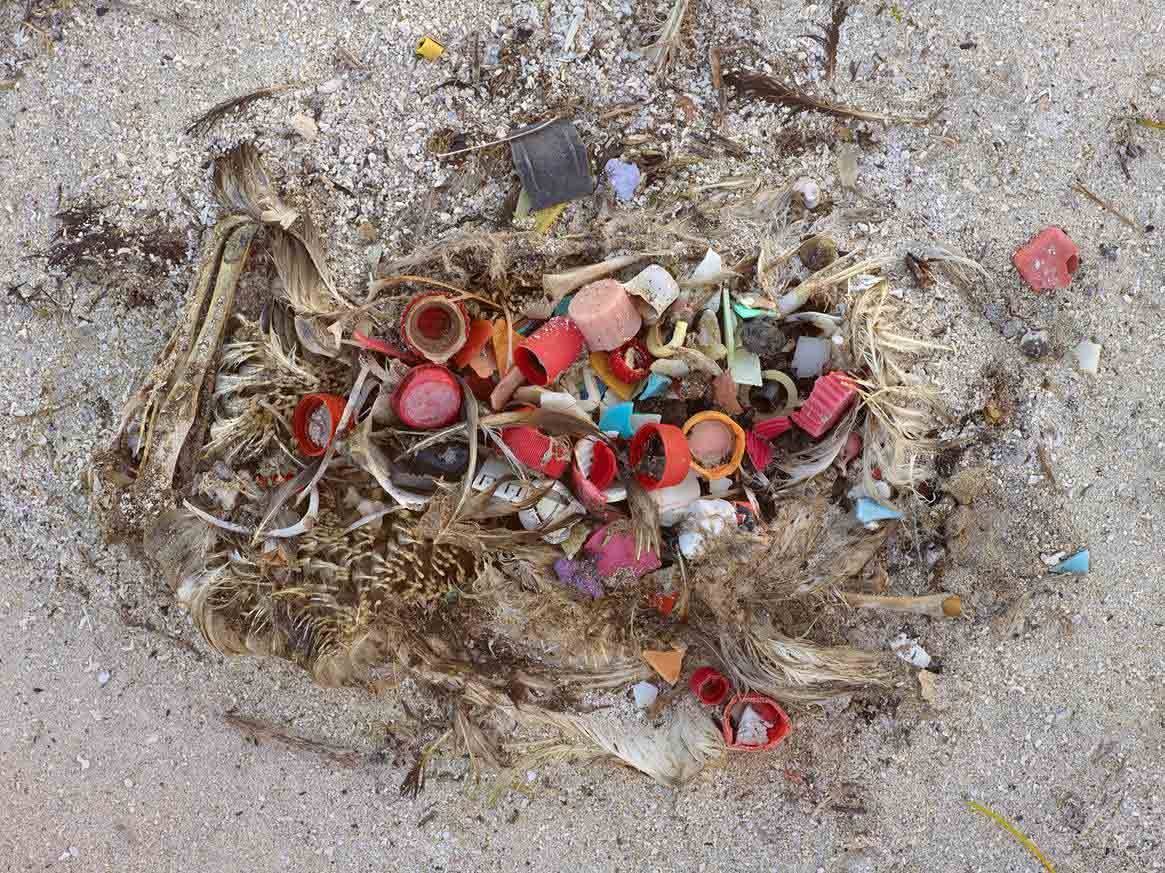 Not just a nation

“Nature's Nation,” while set in the realm of American art, is not a uniquely American story. The United States is itself a planetary creation: Built with labor shipped across the sea, its colonies founded to supply natural resources, the country later became the world's consumer and continues to draw people from around the world. Borders cannot constrain the spread of pollution, climate change or endangered species.

Nor can borders contain human populations. “The Browning of America” is a work that illustrates the porosity of borders and reasserts the nation's indigenous presence through a mixed-media assemblage of symbols and collaged newspaper clippings covered with brownish-red stains. The work was created in 2000 by the artist Jaune Quick-to-See Smith, a member of the Confederated Salish and Kootenai Tribes.

Artists' interpretations of nature and nation have evolved since the days when Thomas Cole covered up human impact on the environment. Kusserow and Braddock hope that by exposing the historical and present-day ways in which art imagines the environment, they can encourage the public conversation around issues of environmental preservation and justice.

"This exhibition asks museum visitors to rethink some basic assumptions about who we are in the world," Kusserow said, "in a way that is designed to prompt conjecture and inspire, as well as teach." He realizes what a momentous task this is, and how high the stakes are.

The exhibition scholarly catalogue, distributed by Yale University Press, is edited by Kusserow and Braddock and features contributions from Igoe, Nixon and Smith as well as Rachael DeLue, the Christopher Binyon Sarofim '86 Professor in American Art and professor of art and archaeology and American studies; Anne McClintock, the A. Barton Hepburn Professor of Gender and Sexuality Studies; Kimia Shahi, a graduate student in art and archaeology; Jeff Richmond-Moll, a member of the Class of 2010 and a graduate student at the University of Delaware; and others.

“Nature’s Nation: American Art and Environment” has been made possible with leadership support from Shelly Malkin, Class of 1986, and Tony Malkin; Annette Merle-Smith; Henry Luce Foundation; Princeton Environmental Institute; and the Barr Ferree Foundation Fund for Publications, Department of Art and Archaeology, Princeton University. Generous support has been provided by the Humanities Council, the Dean for Research Innovation Fund, and the Humanities Council’s David A. Gardner ’69 Magic Grant, Princeton University; and the National Endowment for the Arts. Further support has been provided by Susan and John Diekman, Class of 1965; Gail and Peter Ochs, Class of 1965; the PSEG Foundation; the Kathleen C. Sherrerd Program Fund for American Art; Stacey Roth Goergen, Class of 1990, and Robert B. Goergen; the High Meadows Foundation Sustainability Fund; the New Jersey State Council on the Arts, a partner agency of the National Endowment for the Arts; the Program in American Studies, Princeton University; and the Partners and Friends of the Princeton University Art Museum. This exhibition is supported by an indemnity from the Federal Council on the Arts and the Humanities.