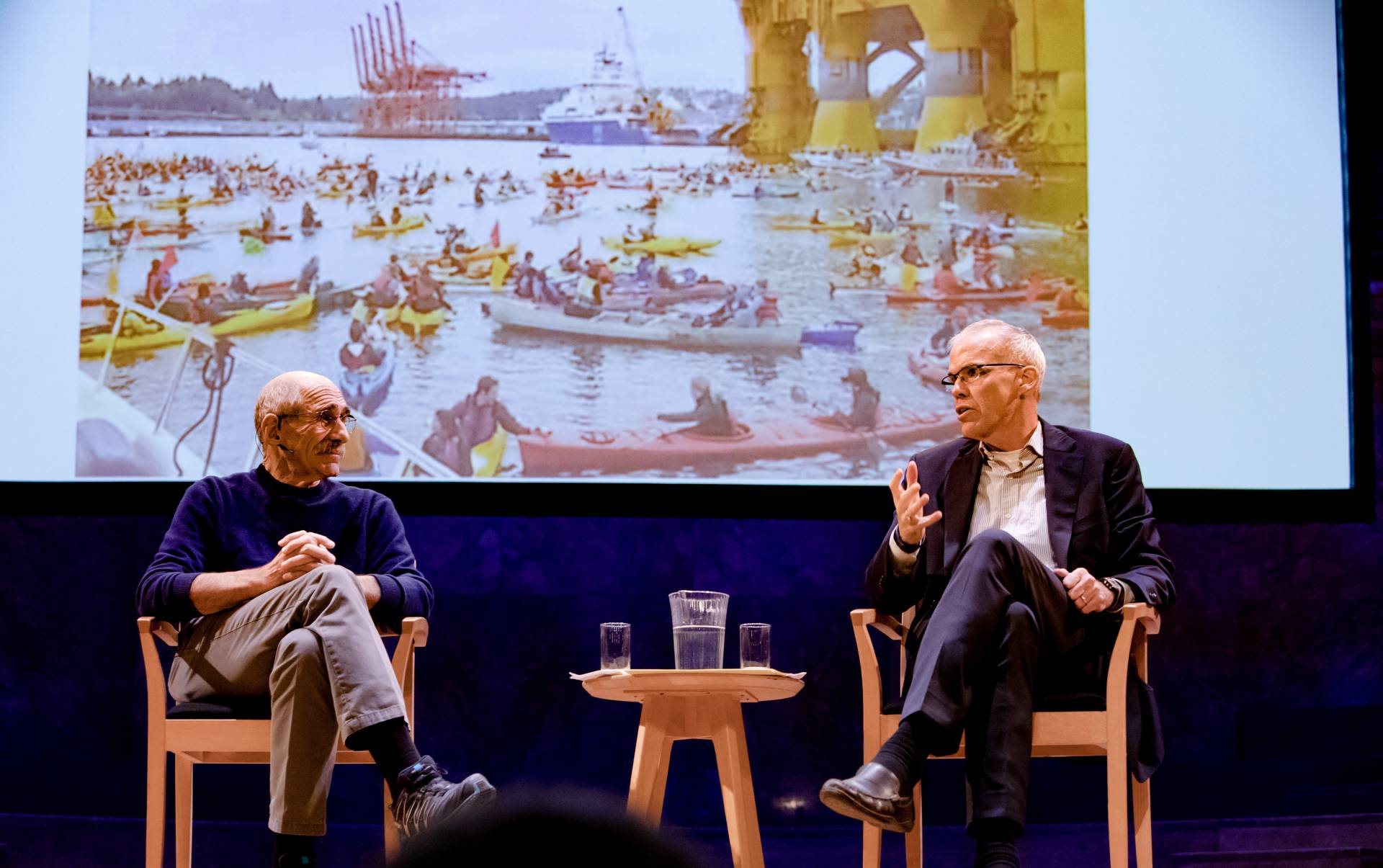 Art — painting and photography, in particular — has played an important role in building a romantic narrative of United States history. It also has the potential to inspire people to protect the very wilderness that has been destroyed in the making of the nation, said author and environmentalist Bill McKibben at a lecture Thursday evening in Richardson Auditorium at Princeton University.

“The daguerreotypes that began emerging from the Adirondacks in the 1860s and ’70s showing the destruction of that forest … those were the first images like that to hit the American eye,” he said. “And it was no accident that the Adirondacks became the first real site of conservation.”

McKibben’s talk, “Art, Activism and the Chance for Change,” was hosted by the Princeton Environmental Institute (PEI) and the Princeton University Art Museum in conjunction with the exhibition “Nature's Nation: American Art and Environment.” Watch a video of the event.

“Nature’s Nation,” which is open to the public through Jan. 6, gathers more than 100 works of art — from the colonial period to the present — to examine how American artists have both reflected and shaped environmental understanding, while contributing to the emergence of a modern ecological consciousness.

McKibben, the Schumann Distinguished Scholar in Environmental Studies at Middlebury College, received the 2014 Right Livelihood Award, sometimes called “the alternative Nobel Prize.” He has written more than a dozen books, including “The End of Nature,” published in 1989, which is regarded as the first book about climate change written for a general audience. He is a founder of 350.org, the global, grassroots climate change movement, which has organized 20,000 rallies around the world in every country except North Korea.

McKibben was introduced by environmentalist Michael Oppenheimer, the Albert G. Milbank Professor of Geosciences and International Affairs and the Princeton Environmental Institute and director of the Center for Policy Research on Energy and the Environment.

Oppenheimer made light of McKibben having been honored by biologists with the naming of a species of woodland gnat — Megophthalmidia mckibbeni. 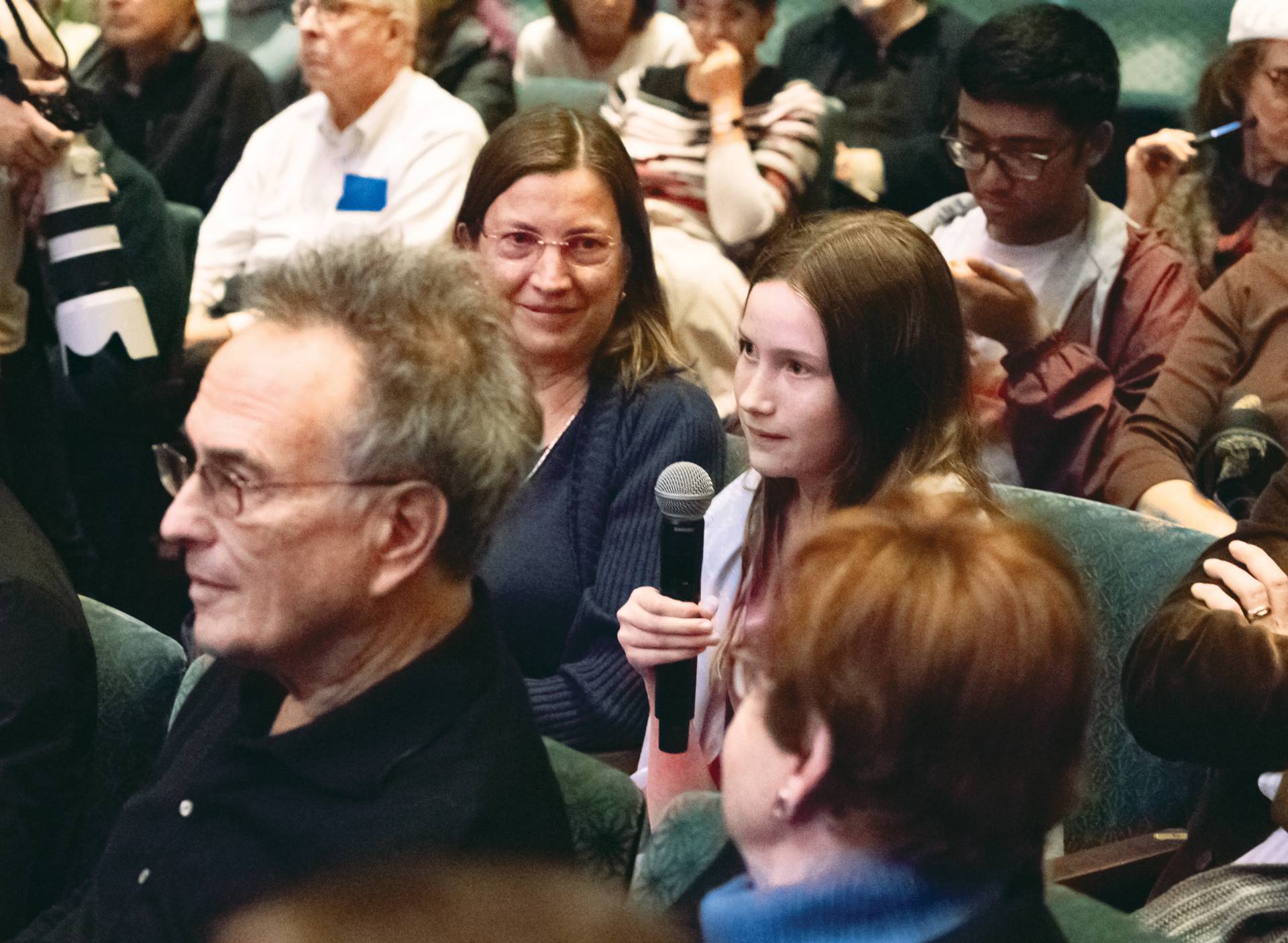 Leala Mauzerall, age 11, daughter of Denise Mauzerall, professor of civil and environmental engineering and public and international affairs at the Woodrow Wilson School, seated next to her, asks McKibben what an individual can do to prevent global warming. He reassured her that even people without power can have an impact by raising their voices. "You will be listened to," he said.

“I’m sure the metaphor of a bothersome creature that won’t leave us alone no matter how many swats that you take must have been in the minds of those who chose the name,” Oppenheimer said. “But if that was the point, the metaphor is inappropriate. Plenty of people make annoying buzzes these days, but they don’t make a difference. Bill McKibben makes a huge difference, at the very least by inspiring millions to get engaged and not give up hope.”

Prior to his talk, McKibben visited “Nature’s Nation” at the art museum, which he described as “remarkable.”

“There is such a plethora of material, and such a moment to be making sense of it all,” he said, explaining that academic, environmental and art historians all are grappling with the task. “Different stories come into the forefront: the theft of a continent, the prosperity built on the backs of people who had no say. It all begins to look differently in our minds even, or maybe especially, in retrospect.”

He added: “I do think that America’s great contribution to the world of letters, and perhaps to visual arts as well, may rest in the fact that we were already artistically conscious when we set about the task of destroying the world around us,” he said. “Here we’re making books and paintings even as we took down the great forests and dammed the waterfalls. So we wrestled all along in useful ways with what that means, and that wrestling is going on still.”

McKibben said that work by photographers Ansel Adams and Eliot Porter influenced environmental legislation in the 1960s. “Without them I very much doubt we ever would have had the Wilderness Act,” he said, going on to read a portion of the law which he said was perhaps our “most poetic.”

He lamented that there was no longer a place “untrammeled by man” — which is how the act defined wilderness. “We are in a fight of immense proportions now … and a fight we are losing badly,” he said. 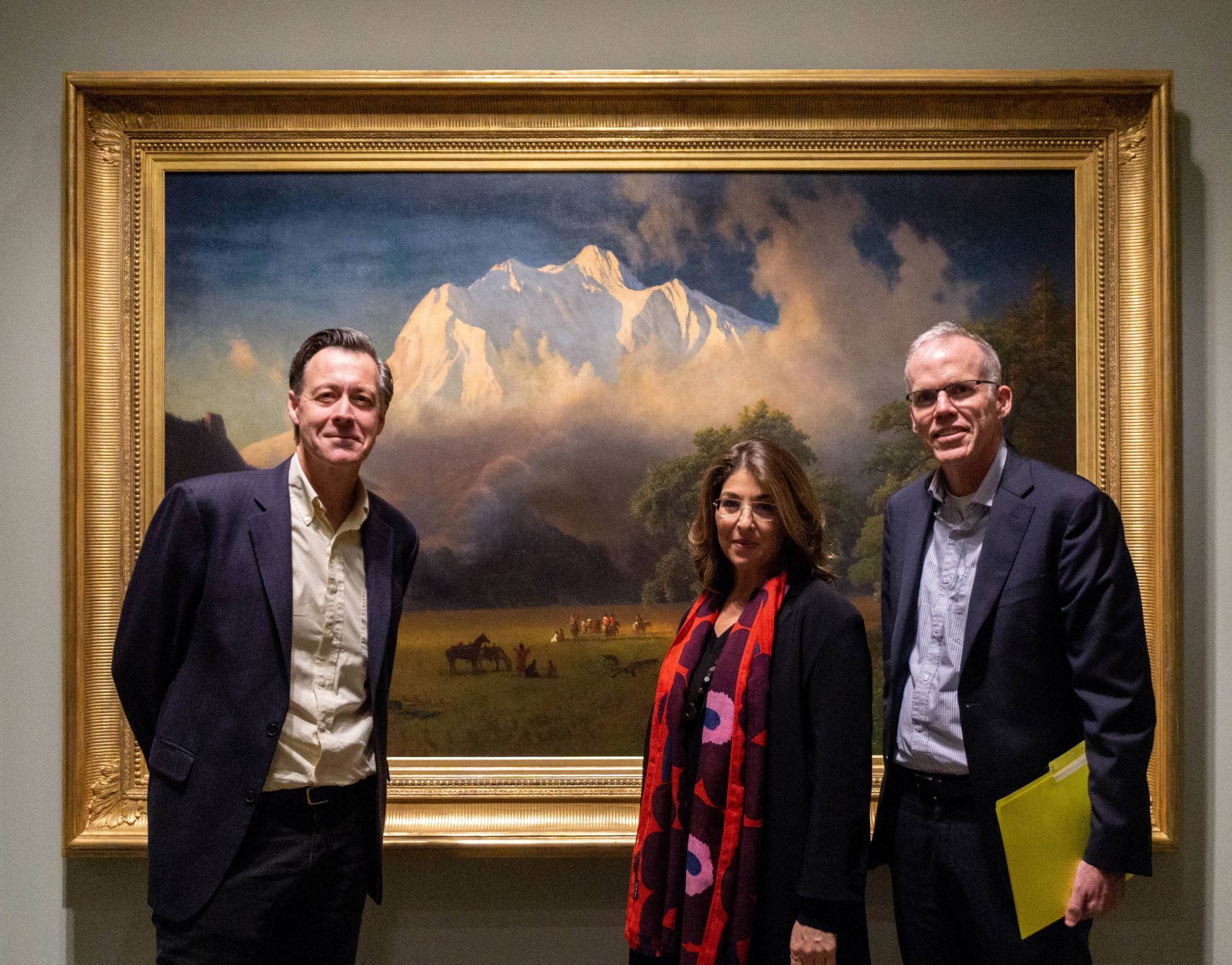 Before his talk, McKibben tours the “Nature’s Nation” exhibition at the art museum, accompanied by Karl Kusserow, left, the John Wilmerding Curator of American Art, and journalist Naomi Klein, center, who will deliver the next installment of the "Art + Environment" event series on Nov. 15. Behind them is Albert Bierstadt’s 1875 work “Mount Adams, Washington.”

During his presentation, McKibben shared photos demonstrating climate change impacts, particularly the retreat of ice in various places across the globe as air and water temperatures rise. He also displayed images from his work with 350.org, which has organized mass demonstrations and created street art to bring awareness to climate change. (The number 350 represents 350 parts per million — the safe concentration of carbon dioxide in the atmosphere.)

“We do have solidarity, we have the redemptive power of non-violence, and we do have a vision,” he said. “Art is one of the most important ways of getting that vision across.”

McKibben also acknowledged Oppenheimer’s efforts as an adviser to the Environmental Defense Fund and the Intergovernmental Panel on Climate Change, thanking him “for your years of hard work in these vineyards.”

McKibben was the first speaker in the “Art + Environment” series organized by PEI and the art museum in conjunction with the exhibition. Other events include a conversation with journalist Naomi Klein on Nov. 15 and a Princeton faculty panel, “Environmental Perspectives on Nature's Nation,” on Nov. 30.