In a painting of Carolina parakeets by American ornithologist John Audubon, the birds' scarlet and yellow visages emanate from a tangle of emerald feathers and brown cocklebur branches. Known for the large tight-knit flocks that made them easy to slaughter en masse, the parrots Audubon depicted preen, feed and perch with their wide eyes fixed on the viewer in seemingly gleeful ignorance of their fate.

Already in decline in Audubon's time, the last known member of the only parrot native to the continental United States would die in a Cincinnati zoo in 1918, less than 100 years after the portrait was published.

The painting is one of many artworks featured in the Princeton University Art Museum exhibition, "Nature's Nation: American Art and Environment," that was used to frame a Nov. 30 panel discussion on the connection between art and the environment. Hosted by the Princeton Environmental Institute (PEI) and the art museum, the event, "Environmental Perspectives on 'Nature's Nation,'" featured four Princeton faculty who drew on their research to talk about environmental topics and issues against the backdrop of selected works from the installation, which runs through Jan. 6. The faculty spoke to a full-capacity crowd in the art museum. 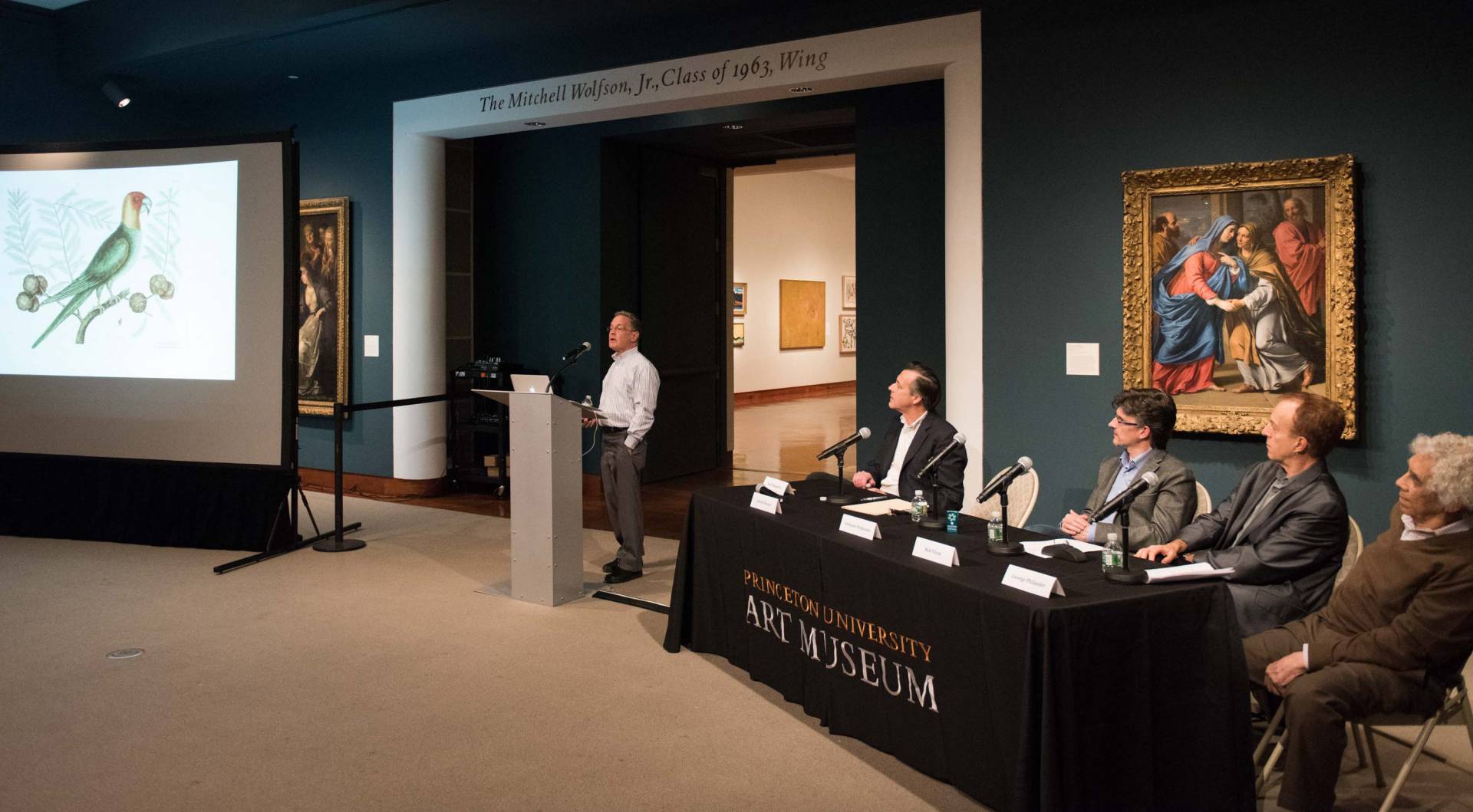 Panelist David Wilcove, professor of ecology and evolutionary biology and public affairs and the Princeton Environmental Institute, highlighted Audubon's "vibrant, lifelike and biologically accurate" painting and two others of Carolina parakeets by 18th-century naturalist Mark Catesby and contemporary artist Walton Ford. The famously cacophonous birds now only call out from paintings such as these as a grim testament to the numerous species and habitats forever lost to the United States' rapacious expansion.

"The demise of the parakeet was part of the great and ghastly loss of wildlife that occurred throughout eastern North America at the last quarter of the 19th century and into the beginning of the 20th century," said Wilcove, whose work focuses on biodiversity and conservation.

"This is an era that saw the extinction of the passenger pigeon, the near extinction of the great bison herds, the disappearance of even animals we know today to be common like the white-tailed deer, along with tremendous reductions in populations of shorebirds, waterfowl and herons as they were relentlessly hunted for their flesh or their feathers," he said.

"It was this rampant exploitation that ultimately led to the birth of the contemporary conservation movement … and laws that ultimately put the brakes on the wholesale commercial slaughter of wildlife," Wilcove said.

Science and art share a reliance on patterns, said Amilcare Porporato, the Thomas J. Wu ’94 Professor of Civil and Environmental Engineering and professor of civil and environmental engineering and the Princeton Environmental Institute. Porporato examined the detailed lines in American artist Alexandre Hogue's "Crucified Land," which depicts a Dust Bowl monocrop farm laid waste by chasms of erosion. The land is pierced by a black-shrouded cross.

The lines in Hogue's painting mirror the dendritic patterns Porporato studies as an ecohydrologist. "This is kind of universal not only for the way nature works, but also artists extract from patterns simple versions," he said. "Scientists do the same — we start from reality and then we make caricatures with it. Patterns are really crucial for both science and art." 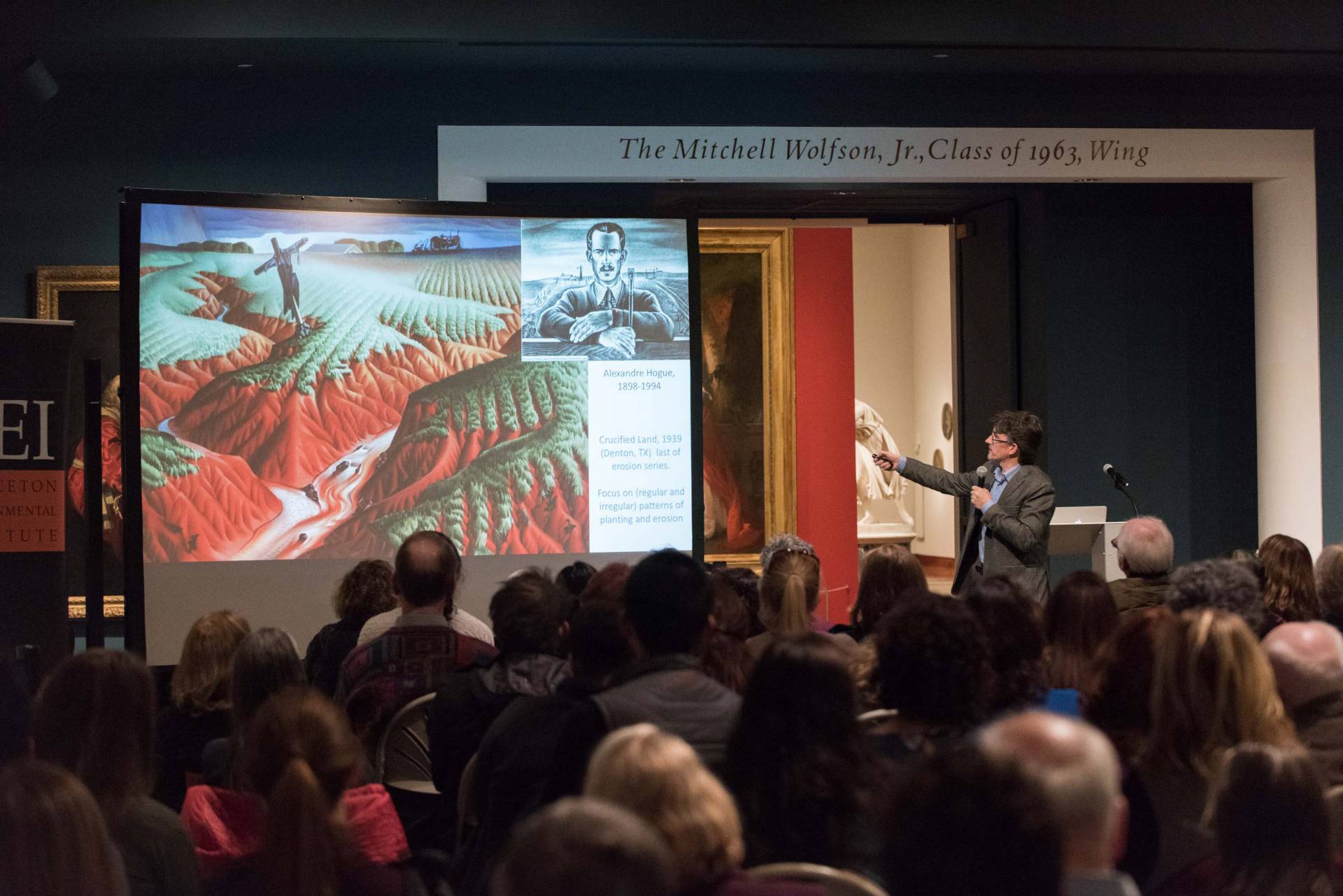 Porporato compared the lines in American artist Alexandre Hogue's "Crucified Land" to the dendritic patterns he studies as an ecohydrologist. "Patterns are really crucial for both science and art," he said.

While science expands our knowledge of environmental crises, art helps the data resonate emotionally, said Rob Nixon, the Thomas A. and Currie C. Barron Family Professor in Humanities and the Environment and professor of English and the Princeton Environmental Institute.

"One of the things that draws me to the environmental arts is the power of art to make large-scale effects visceral, to bring them within the domain of felt experience," Nixon said. "Many of the most challenging environmental crises and concerns of our time are extraordinarily large-scale, they're very hard to get imaginary traction on."

Nixon focused on a photo in "Nature's Nation" of an albatross carcass filled with plastic debris, primarily bottle caps. Taken from the series “Midway: Message from the Gyre” by photographer and filmmaker Chris Jordan, the image was captured on Midway Atoll in the Pacific Ocean, which is a primary breeding and nesting area for albatrosses.

The image shows the mortal consequences of the Great Pacific garbage patch, a swirling expanse of plastic refuse brought together by various ocean currents that is estimated to be more than 600,000 square miles in size and include more than 88,000 tons of plastic. Albatross parents inadvertently scoop up plastic litter from the patch and feed it to their chicks, which subsequently die of dehydration and malnutrition. With this photo, Jordan depicts the devastation of the patch, which is itself too large — and its components too small and dispersed — to be seen in its entirety, Nixon said.

"The subject that his photographic series raises is the status of grief, what do we do with environmental grief? I think that we avoid passing through grief at our peril," Nixon said. He explained further during a discussion with the audience, "Rather than sidestepping grief, [Jordan] walks through it and gets to a place of celebration that also is a place that acknowledges loss and tries to dramatize the cost of what we're losing by emphasizing and allowing us to see in new ways what it is that we love."

Discussion moderator Karl Kusserow, the John Wilmerding Curator of American Art at the art museum, said that the installation balances beauty and crisis. Kusserow co-curated "Nature's Nation" with Alan Braddock, the 2016 PEI Barron Visiting Professor in the Environment and the Humanities and the Ralph H. Wark Associate Professor of Art History and American Studies at the College of William and Mary.

"In telling a story about environmental change, which the show does, we didn't want it to be a totally downbeat experience. One of things that rescues it from that is the incredible beauty of a lot of the work that is displayed, which is at once encouraging, and frightening to think that we're in a place where a lot of that could go away," Kusserow said.

"All is not lost, but I think it's fair to say that we are losing," he said. "That is something we should all be very concerned about and that, I can tell you, is really the main reason I spent seven years of my life putting this show together."

George Philander, the Knox Taylor Professor of Geosciences, Emeritus, used the 1968 photo "Earthrise" taken by NASA Apollo 8 astronaut Bill Anders to discuss the necessary blending of science and humanism that addressing climate change requires. Philander, who refers to himself as an "optimistic environmentalist," said that current discussions about climate change rely too heavily on bleak data-driven scenarios.

"We sound the notes of imminent gloom and doom and offer advice on how to adapt to and mitigate disasters. That strategy is inadequate. It's causing global warming to be polarizing," Philander said.

"Global warming requires the involvement of everyone, not merely of scientists, because the problem we face is beyond the scale of science," he said. "The challenge is to bridge the profoundly different worlds of human affairs and of science."

The panel was the second event in the Art+Environment series hosted by PEI and the art museum in conjunction with "Nature's Nation." Other events include a public lecture by author and environmentalist Bill McKibben on Oct. 25 and a Dec. 11 conversation with journalist Naomi Klein.