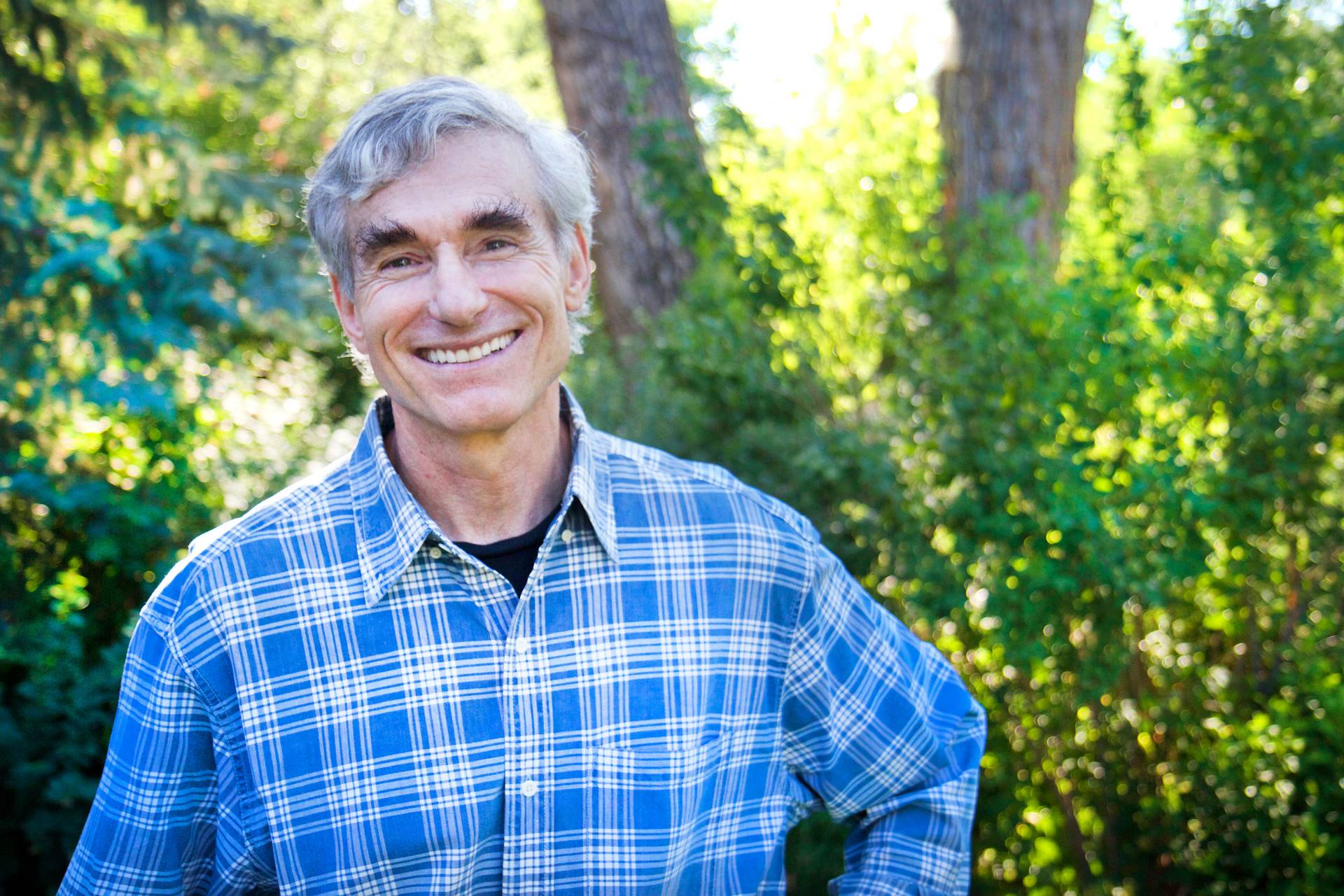 Tom Barron, Class of 1974, is an award-winning author and conservationist. He and his wife, Currie, endowed a Biodiversity Research Challenge Fund to Princeton University’s High Meadows Environmental Institute to support research crucial to preserving species and ecosystems.

Princeton University has established an endowed fund with a gift from Currie C. and Thomas A. Barron that will significantly increase support for environmental research related to biodiversity and build upon the University’s decades-long leadership in studying and protecting the rich variety of Earth’s ecosystems.

The Thomas A. and Currie C. Barron Family Biodiversity Research Challenge Fund will support individuals or teams of Princeton faculty and students from across the campus who pursue research crucial to preserving species and the interconnectivity of ecosystems. The Biodiversity Challenge program will be based in and overseen by the High Meadows Environmental Institute (HMEI) — previously known as the Princeton Environmental Institute (PEI).  With the new biodiversity fund, HMEI now has four research challenge funds addressing urgent and complex global environmental issues including programs dedicated to climate and energy, oceans and freshwater systems, and sustainable cities. 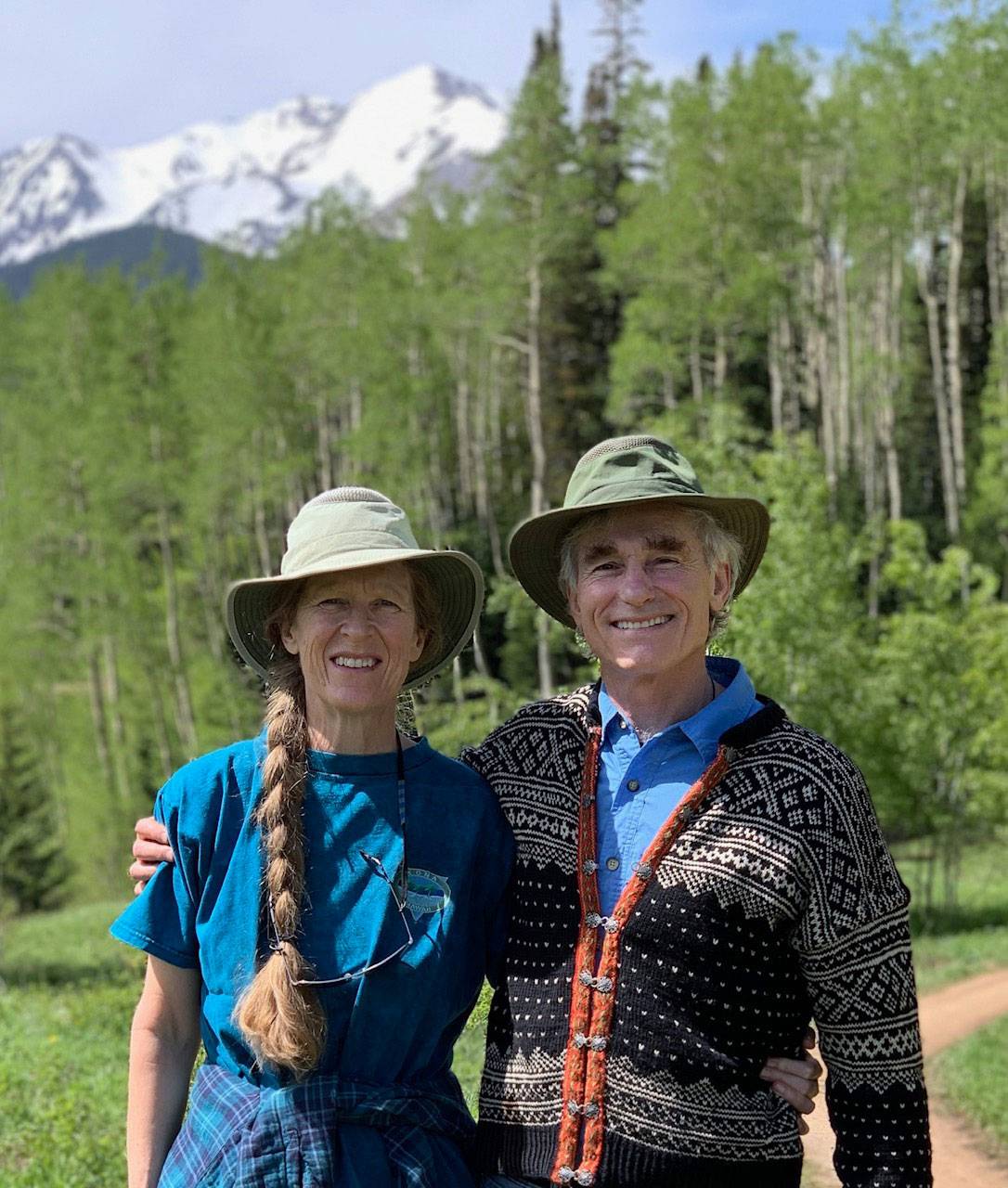 Currie and Tom Barron, pictured at their home in Colorado.

“There is no greater long-term challenge to humanity than the environmental crisis, and Princeton’s mission of service compels us to find solutions to mitigate the impact on our ecosystems,” said University President Christopher L. Eisgruber. “Currie and Tom Barron care deeply about preserving our planet’s biodiversity. They have been dedicated and creative champions for environmental research at Princeton for several decades, supporting our approach to finding workable global solutions through interdisciplinary collaboration between scientists, policy makers, industry and storytellers. We are deeply grateful to the Barrons for their vision and their commitment.”

The preservation of biodiversity is one of the most urgent environmental problems today, with human activity driving an accelerated loss of plant and animal species worldwide, often referred to as the sixth mass extinction. Many of the tools and theories scientists use in the lab and field today — from mathematical models and gene sequencing, to climate models and satellites — have their roots at Princeton. Today, the University’s scientists — many of whom are appointed in or affiliated with HMEI — continue to lead the way in studying the dynamics of species and natural systems in ways that are relevant to sustainability and conservation.

“When you lose biodiversity, when you pluck out strands of the complicated web of life surrounding us, that can require 100 million years of evolutionary time to repair,” said Tom Barron, a member of the Class of 1974. “Every species has the right to live. On top of that, when we harm other species, we also often harm ourselves. Think for a moment about what our lives would be like if we had no pollinators. That would devastate our fruits, our trees, and our global supplies of food, as well as our spirits. So the declines in honeybees and monarch butterflies, which are terrible losses by themselves, are also great losses to humanity.”

A former University trustee, Tom Barron was influential in the founding of PEI (now HMEI) and continues, to this day, to serve as a member of its advisory board. The Barrons have contributed to the flourishing of HMEI’s Environmental Humanities Program, which encourages and supports the participation of Princeton faculty, research scholars and students from the humanities and the social sciences in the study of environmental issues.

Central to the program’s scope has been the Barrons’ establishment of a full professorship in the humanities and the environment, currently appointed in HMEI and the Department of English, as well as the Barron Visiting Professorship, which brings accomplished and emerging humanists working on environmental topics to Princeton for stays lasting up to one year. The Barrons also established a freshman seminar in environmental writing. 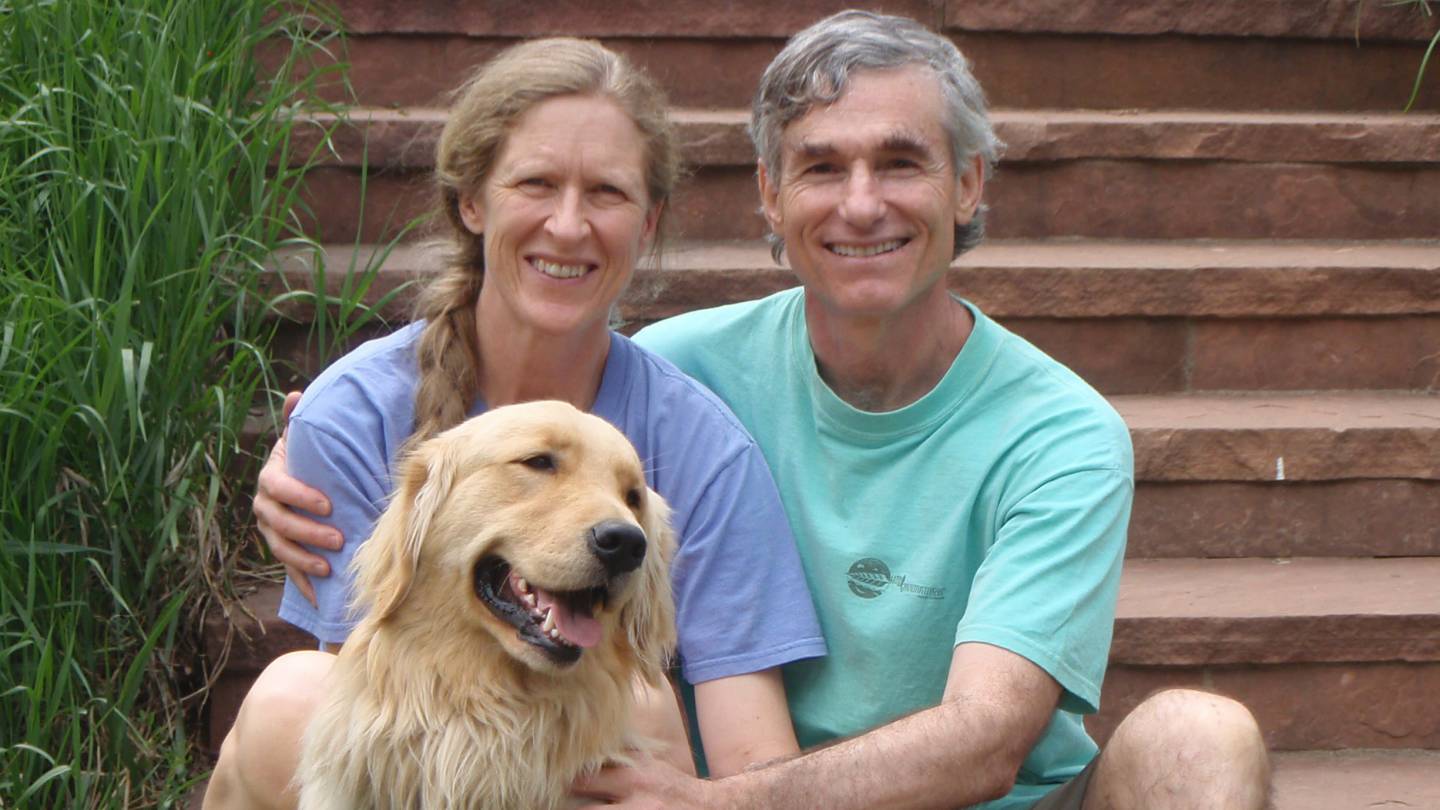 HMEI serves as the center for environmental research, teaching and outreach at Princeton, bringing together more than 120 faculty from 30 academic disciplines to work on topics including climate science and climate modeling, carbon mitigation, biodiversity and biocomplexity, water security, and environmental justice, among other environmental topics.

“Princeton’s Environmental Institute was founded in 1994 to provide an intellectual and organizational hub for innovative thinkers from across the University to pursue and collaborate on practical, forward-thinking solutions to the environmental issues facing society,” said Michael Celia, director of HMEI, the Theodora Shelton Pitney Professor of Environmental Studies and professor of civil and environmental engineering. “During the past 25 years, the Institute has brought that vision to bear not only through prolific and impactful research but also through our steadfast commitment to educating the next generation of leaders. 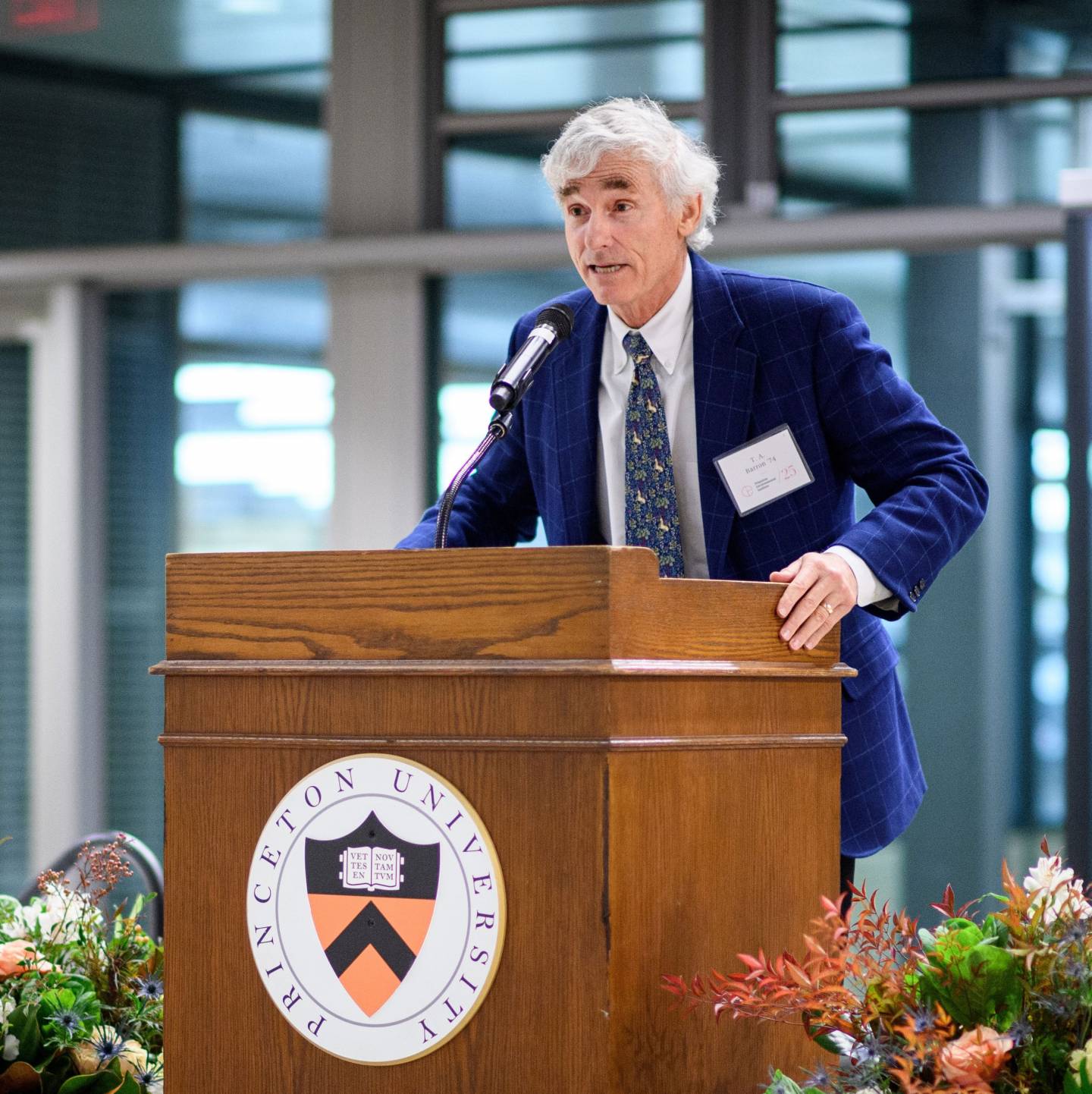 Barron speaks at the Princeton Environmental Forum in October 2019.

“From our founding, Currie and Tom Barron have not only been passionate supporters of our environmental initiatives — they’ve been outstanding partners,” Celia added. “Their support of Princeton’s work related to biodiversity illustrates their deep understanding of how crucial the complexity of natural systems is to global ecosystems and to human society. It also signifies their acknowledgement that the work carried out at Princeton and through HMEI is — and will continue to be — essential to understanding that complexity, how we all depend on it and what we can do to protect it. We are extremely grateful to the Barrons for their generous gift and their ongoing belief in our mission.”

As an undergraduate at Princeton, Barron won the M. Taylor Pyne Prize and went on to Oxford on a Rhodes Scholarship. He earned M.B.A and law degrees from Harvard University, and embarked on a successful career at a private equity investment firm in New York City, serving as president and chief operating officer of his publicly traded company.

In 1990, Barron left his career in finance and moved his family to Colorado to become a full-time writer. He is known to his readers as T. A. Barron, an award-winning and internationally bestselling author of novels and children’s books, including the fantasy adventure series “The Merlin Saga,” currently being developed into a movie by the Disney studio.

Barron is the author of 31 books. In 2011, he was awarded he was awarded the de Grummond Medallion for “lifetime contribution to the field of children’s and young adult literature.”

For the past 40 years, Barron has been a leading voice for the Wilderness Society, which is dedicated to the protection of natural habitats and federal public lands, and he also has been active with organizations including Earthjustice, World Wildlife Fund and Wildlife Conservation Society.

“President Eisgruber has raised the bar for Princeton to draw on the strengths of many interdisciplinary fields to help us answer these very big questions,” Barron said. “We need to reach people in ways that go beyond the science. The atmosphere, the oceans, the forests: All of those are going to be saved only if we understand that the Earth itself is a great story, a story that includes us. We need to tell that story in a much more compelling and inspiring way.” 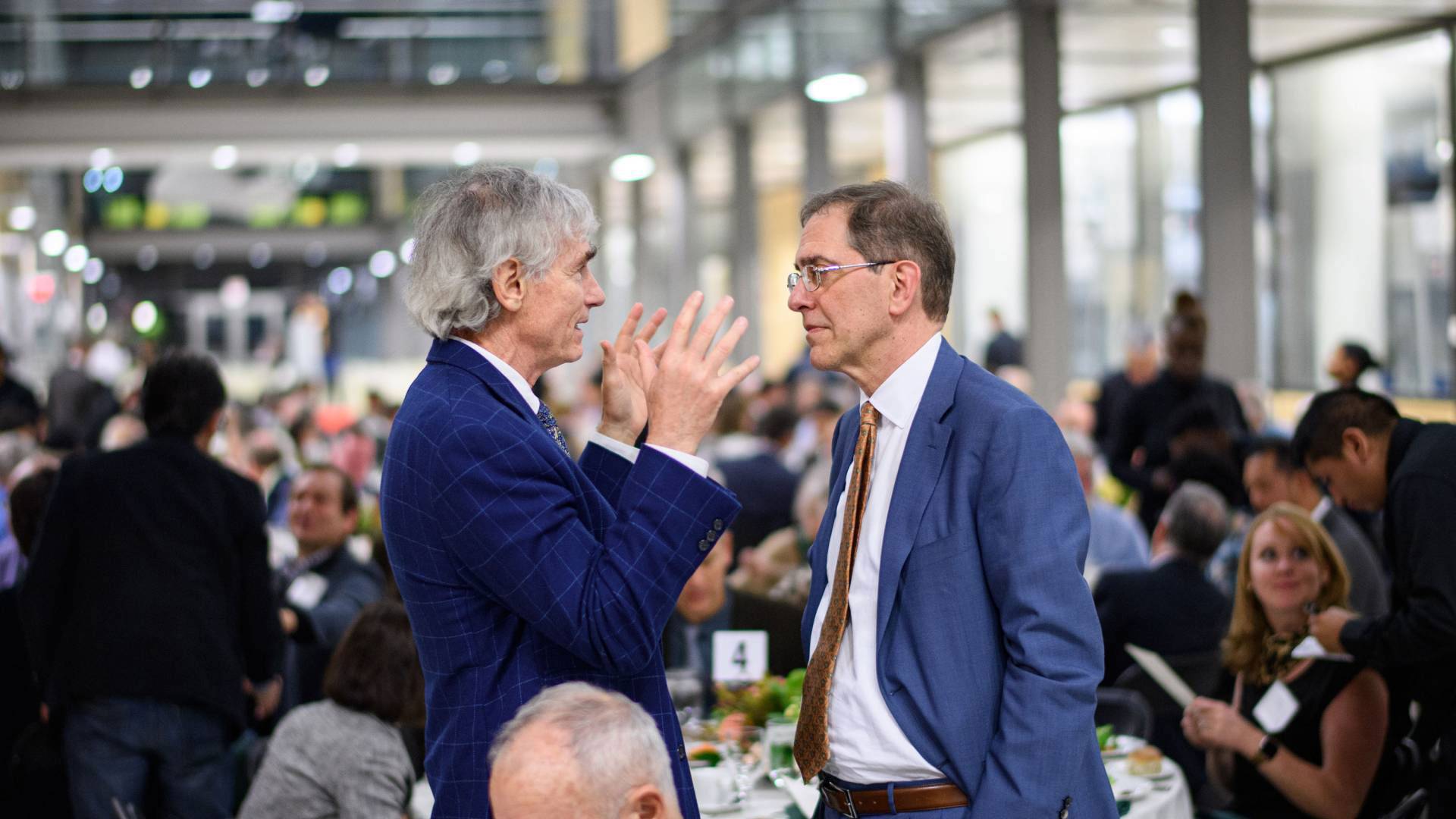