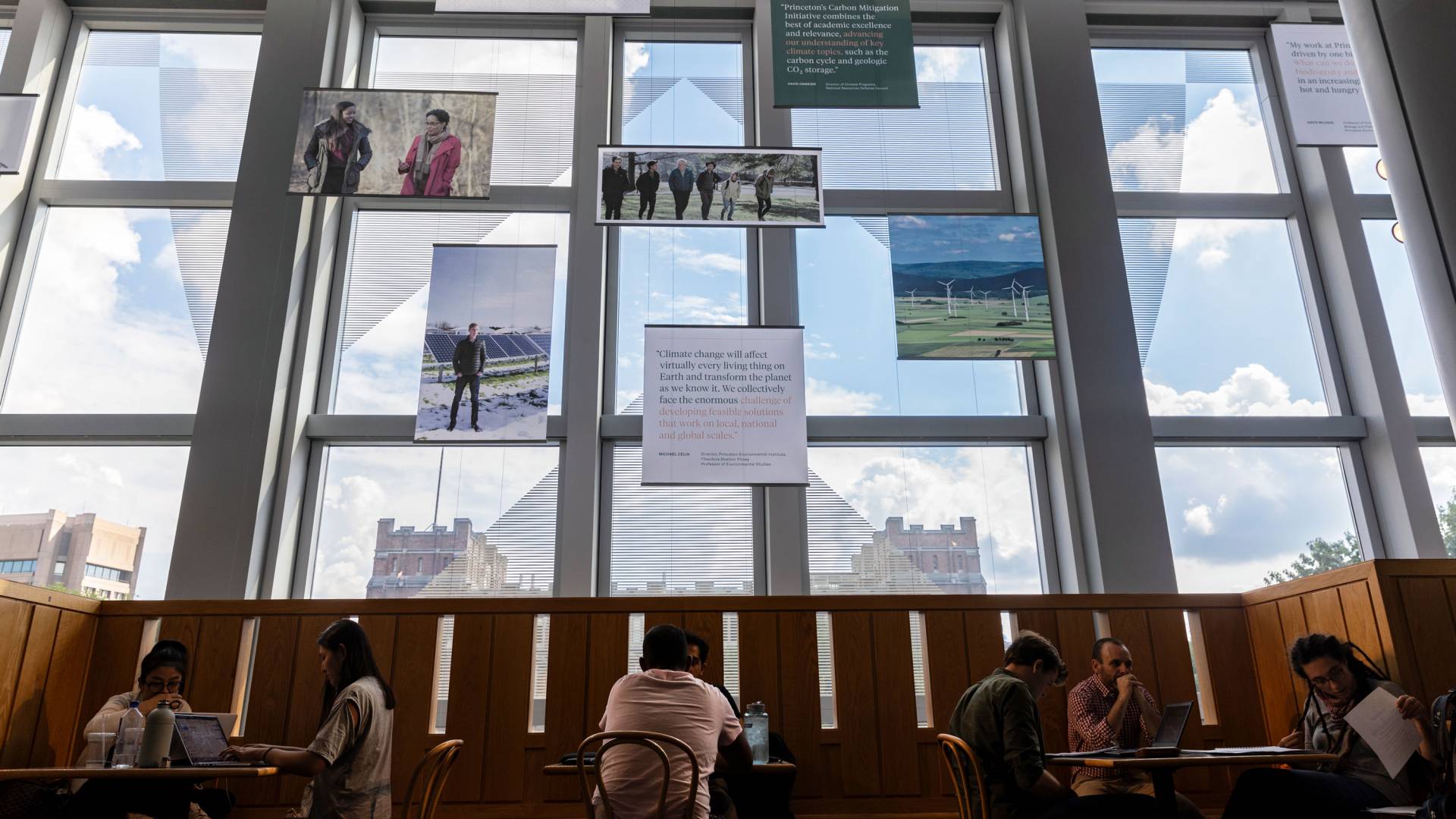 The crucial work that Princeton faculty and students carry out to better understand and preserve our planet is the centerpiece of an exhibition at the Frist Campus Center that celebrates environmental research and education at the University. On display through 2019, the panels hang from the atrium ceiling south of the central staircase and are visible from the A, 100 and 200 levels.

From the oceans to the forests, from diseases to natural disasters, Princeton faculty and students are carrying out research crucial to understanding and preserving our planet. Those efforts are the centerpiece of an exhibition celebrating environmental research and education at the University. The installation was organized by the Princeton Environmental Institute (PEI) in anticipation of the 25th anniversary of its founding, which will be celebrated next year. 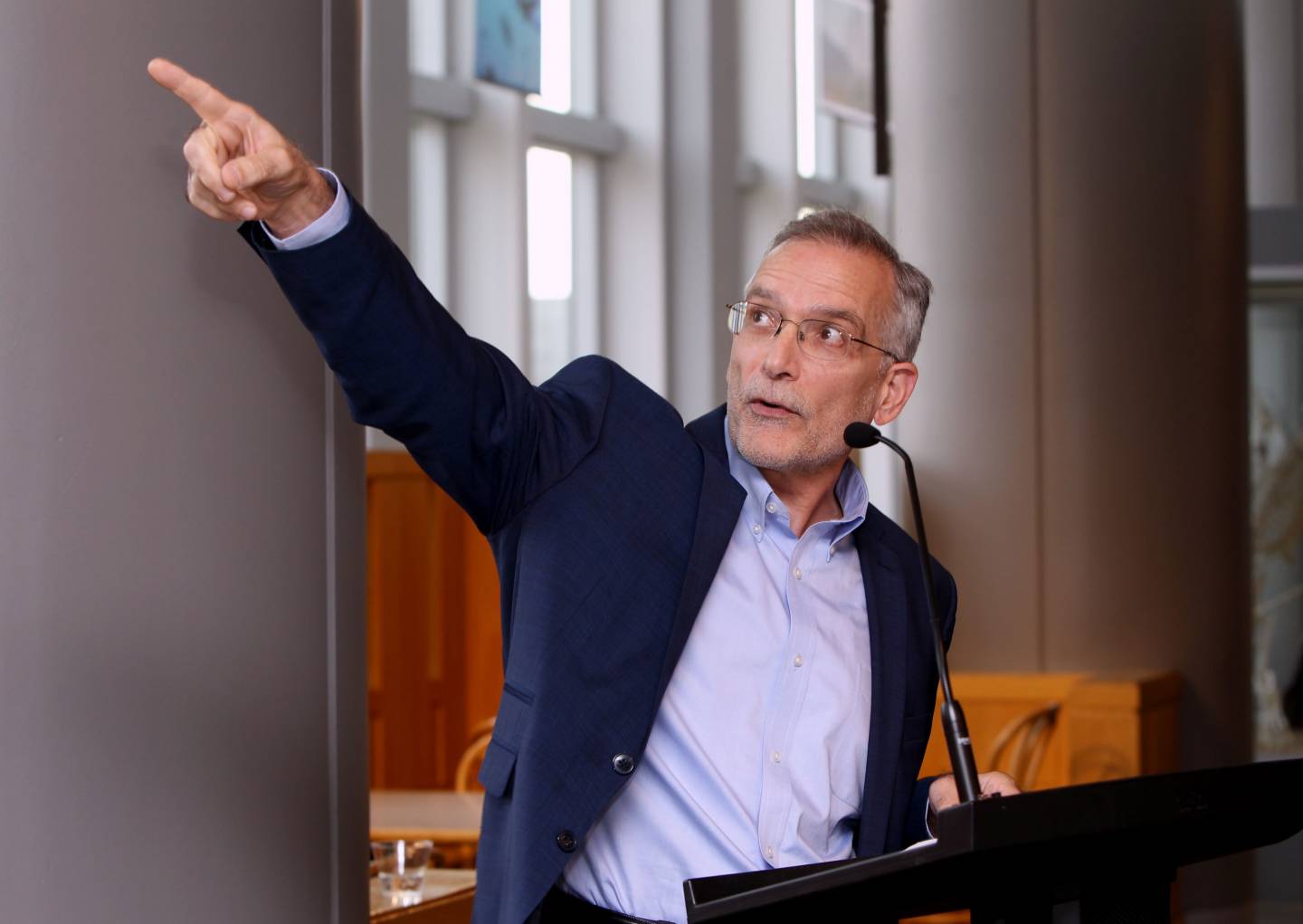 The installation was organized by the Princeton Environmental Institute (PEI) in anticipation of the 25th anniversary of its founding. At a reception for the exhibition, PEI Director Michael Celia, shown, said the display is intended to raise awareness of the work being carried out under PEI that seeks to address the environmental issues facing humanity.

On display at Frist Campus Center through 2019, the 41-panel exhibition features photos from the field and the classroom, as well as quotes from faculty, students and collaborators about the focus and significance of environmental research and teaching at Princeton. The panels hang from the atrium ceiling south of the central staircase and are visible from the A, 100 and 200 levels.

"For me, this exhibition has the dual purpose of celebrating the past 25 years and motivating the next 25," Celia said. "PEI is, and has been, the hub of environmental studies on campus. As environmental studies at Princeton expands, we thought it was important to prominently feature the various programs and people under the PEI umbrella that people across campus interact with every day."

At a reception for the exhibition, Celia discussed the different areas of environmental studies the installation explores. "We wanted to tell a little bit of the story of PEI's history, but equally as important, we hope to raise the visibility of the large environmental issues all of humanity will face in the next century," Celia said. 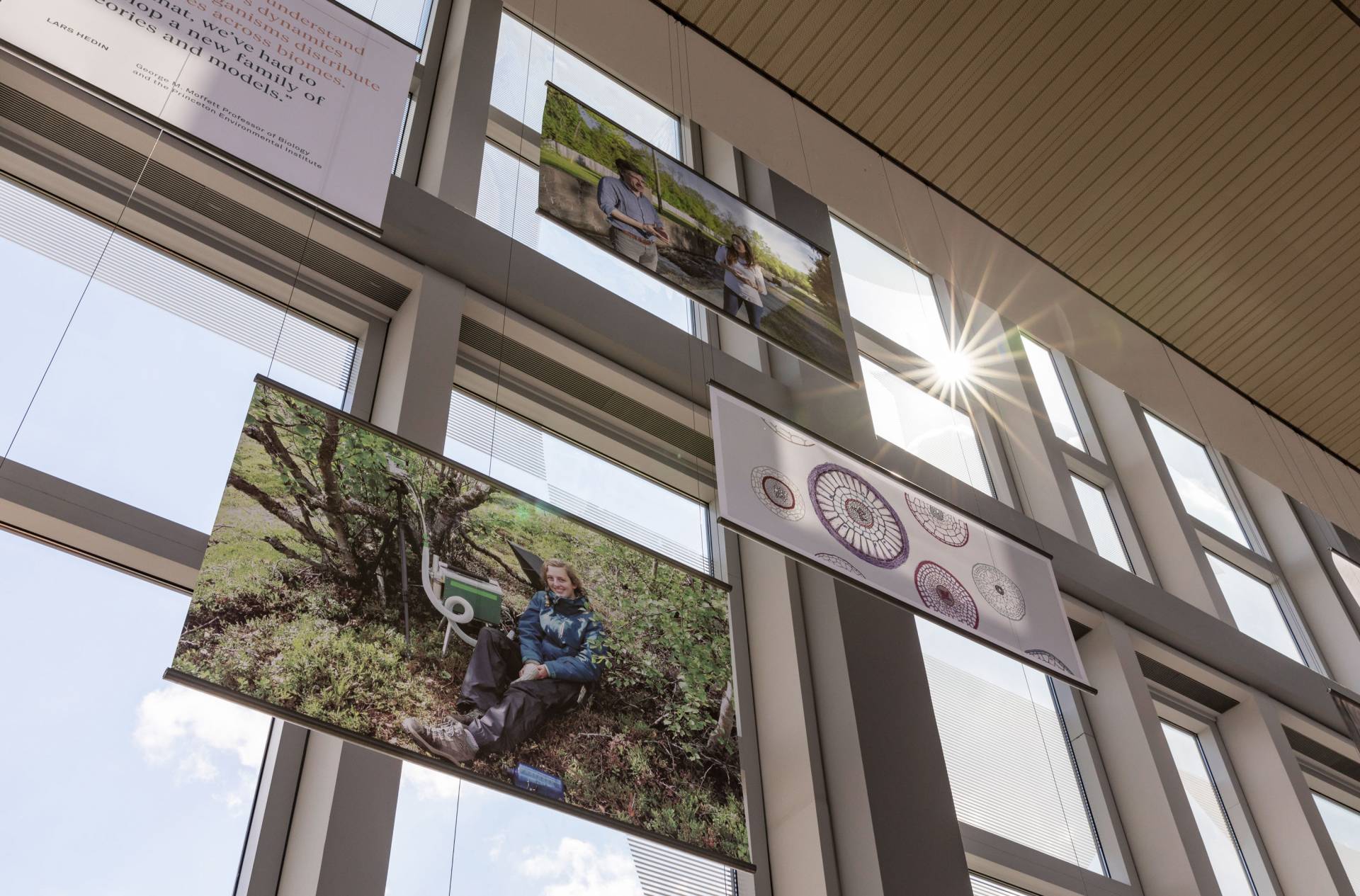 Panels in the exhibition feature students working in the field and alongside faculty.

The exhibition is organized into 10 bays, each one of which focuses on significant environmental research being pursued under PEI's programs. PEI faculty and students are shown in the lab and the field undertaking work related to biodiversity, climate modeling and energy, oceans and biogeochemistry, ecohydrology, climate change and disease, the environmental humanities, urban impacts and environmental policy, extreme weather events, undergraduate education, and humanity's impact on the environment. Panels within the bays are testimony to the interdisciplinary research culture vital to the University's scientific strength, and feature students working alongside eminent faculty in a variety of ecosystems all over the world.

A panel at the southwest entrance of the Frist A Level marks milestones in PEI's history and provides a timeline of how environmental studies developed at Princeton against a backdrop of increasing environmental consciousness and action worldwide since the 1950s, especially related to climate change.

The highlights of this panel include the founding of PEI in 1994 and the founding by Princeton faculty of the field of ecohydrology, which studies the connections between the water cycle and plant ecosystems. The timeline also features the establishment of the PEI-based Carbon Mitigation Initiative (CMI) in 2000 — founded in partnership with BP — and the 2014 launch of the NSF-funded Southern Ocean Carbon and Climate Observations and Modeling project (SOCCOM), which explores the role of the Southern Ocean in climate regulation and ocean health. The people and work of CMI and SOCCOM are on display in the bays related to climate and energy and to oceans and biogeochemistry, respectively. 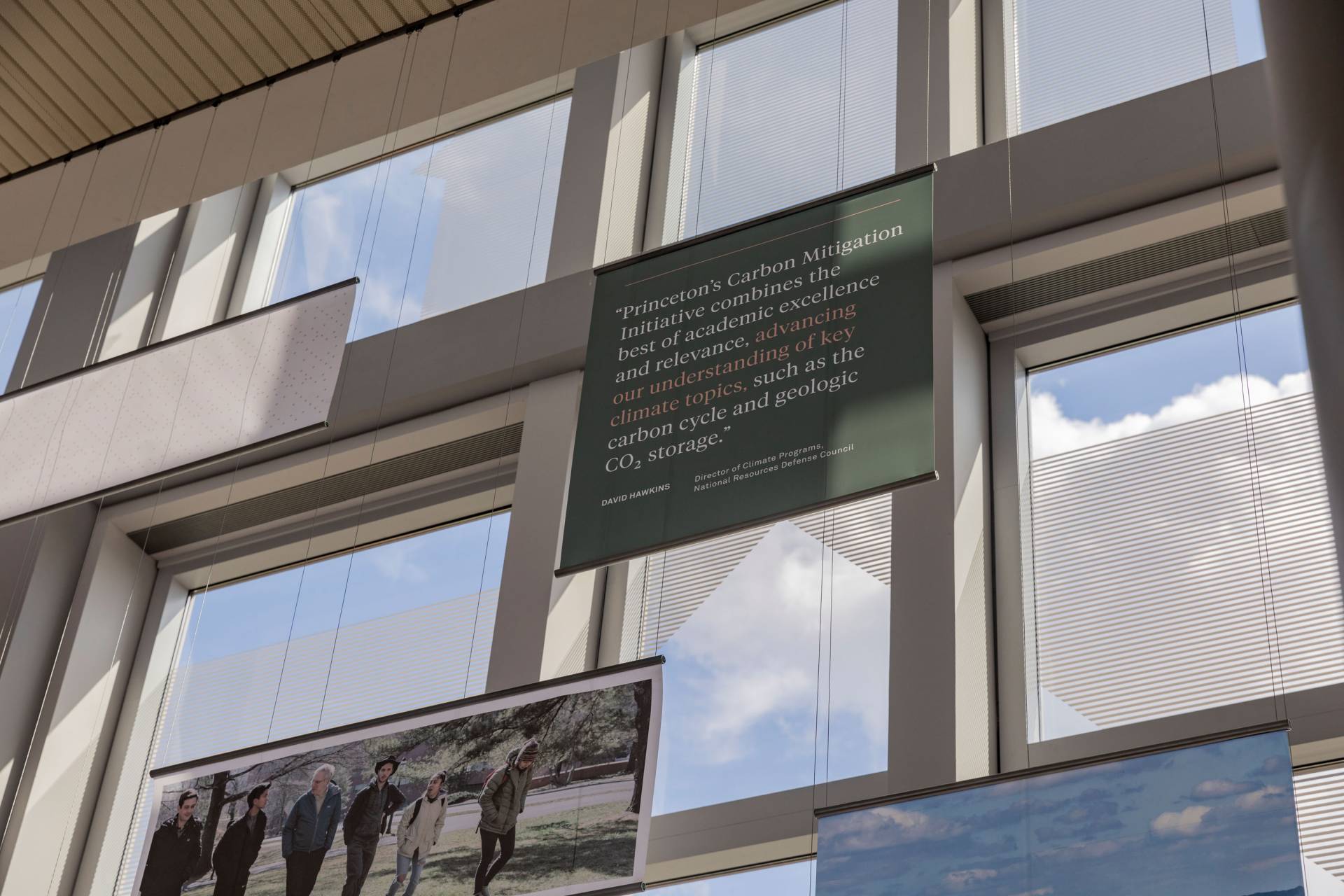 Several panels feature quotes from faculty, researchers and students about the focus of their work, as well as from collaborators about the significance of environmental research and teaching at Princeton.

"A distinguishing feature of PEI is the broad participation of faculty and students from nearly all disciplines," said Katharine Hackett, PEI's executive director. "This exhibition captures the remarkable breadth of environmental research at Princeton, and it acknowledges the University's important contributions to advancing knowledge of, and solutions to, urgent environmental challenges."

Princeton is distinguished by the diversity and influence of its environmental focus, said Dean for Research Pablo Debendetti, the Class of 1950 Professor in Engineering and Applied Science and professor of chemical and biological engineering.

"Princeton's environmental research programs tackle some of society's greatest challenges, such as climate and energy research, biodiversity and conservation, and water quality," Debenedetti said. "A core element is our interdisciplinary focus, which brings together experts from across the University to make discoveries with the potential to lead to new practices and policies that benefit our planet and humanity."

"I think it's great to have a visually captivating highlight of the different ways that the University is a leader in the environment," said Gabriel Vecchi, professor of geosciences and the Princeton Environmental Institute, after seeing the installation. 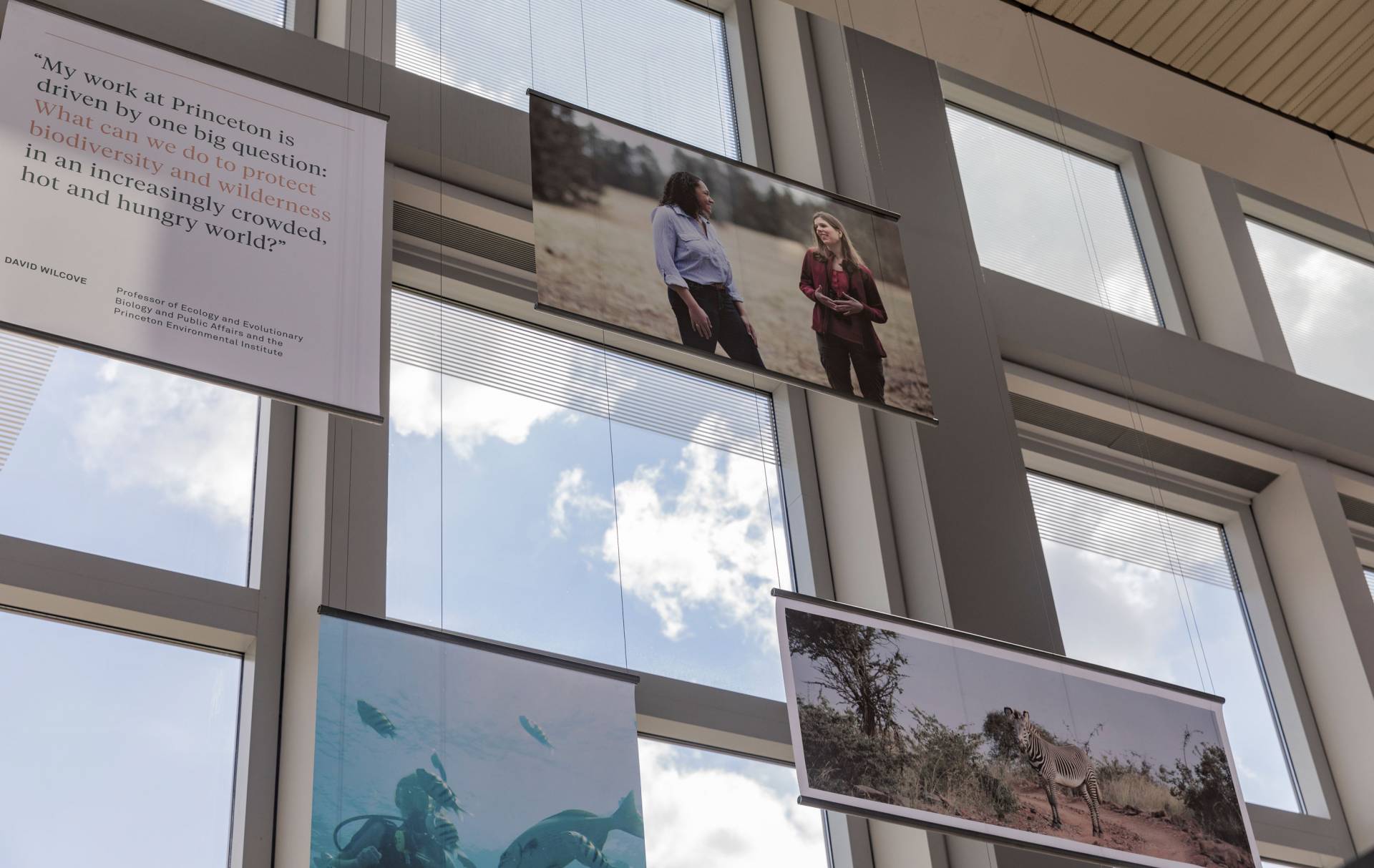 Mary Caswell (Cassie) Stoddard, assistant professor of ecology and environmental biology and PEI associated faculty, said that the interdisciplinary connections at Princeton are essential for students and new faculty eager to explore the various dimensions of environmental issues. "It's exciting for me to see on display how many aspects of environmental research there are at Princeton, how it involves faculty from all over campus," Stoddard said.

Bess Ward, the William J. Sinclair Professor of Geosciences and the Princeton Environmental Institute and geosciences department chair, said that the exhibition captures the scholarly community that distinguishes environmental studies at the University.

"The exhibition does a nice job of showcasing PEI as the entity that forges connections across departments that might not otherwise have happened," Ward said. "It's a strong community."