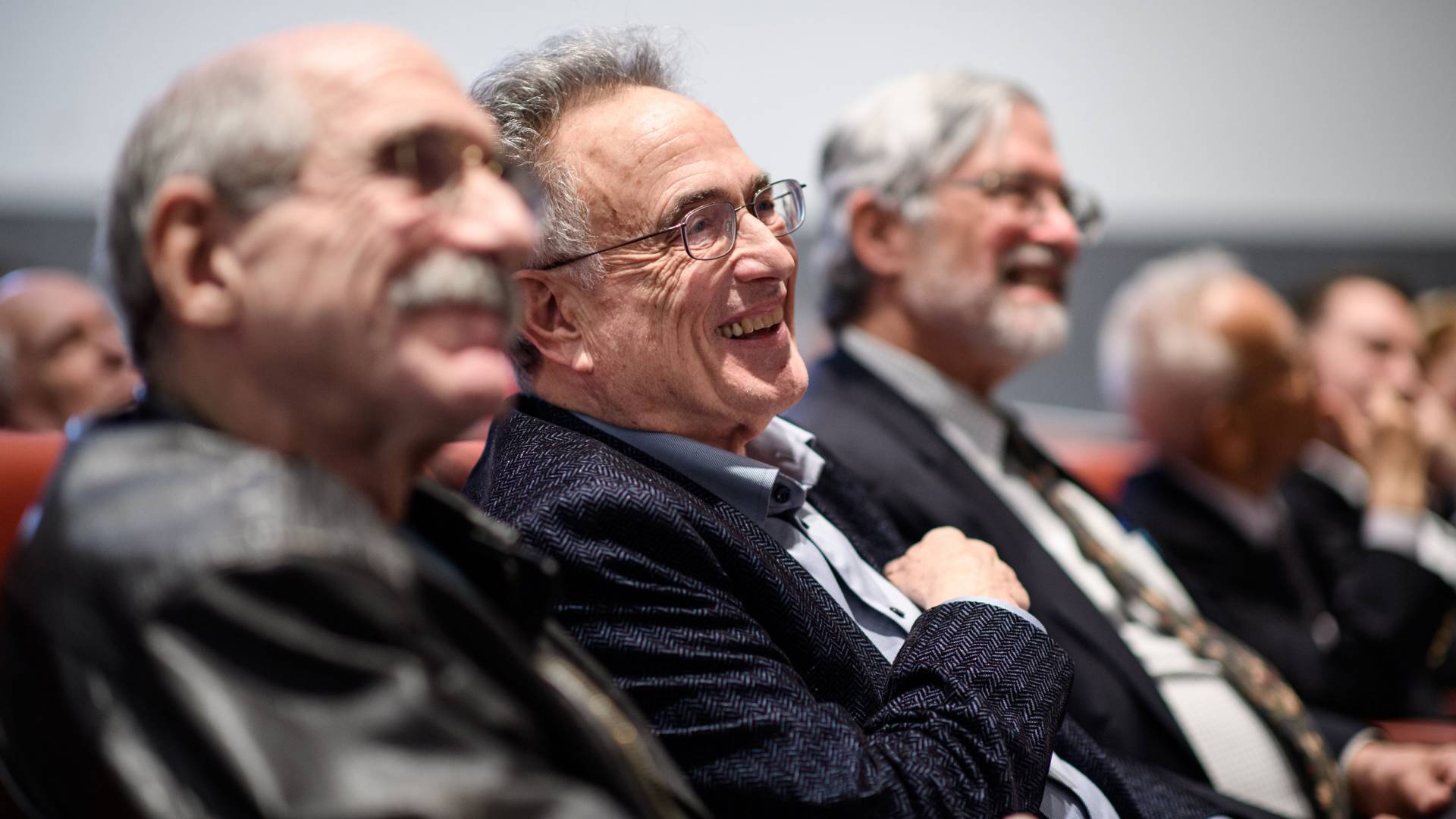 Princeton professor Robert Socolow (center) and his 48 years of environmental problem-solving were the focus of the daylong April 15 symposium "Destiny Studies for a Small Planet." The event consisted of six panel discussions examining the current state, and trajectory of, broad topics that are central to Socolow’s long career — and crucial to solving our most pressing environmental crises.

In the grand tradition of European academia known as festschrift, colleagues and friends of a retiring academic gather to commemorate the gravity and legacy of the person’s career with papers and talks.

Robert Socolow has been to enough festschrifts to know that, after 48 years at Princeton of teaching, studying, contemplating, reframing, challenging, and often times expanding how scientists and society understand the environment, a retrospective wasn’t for him. 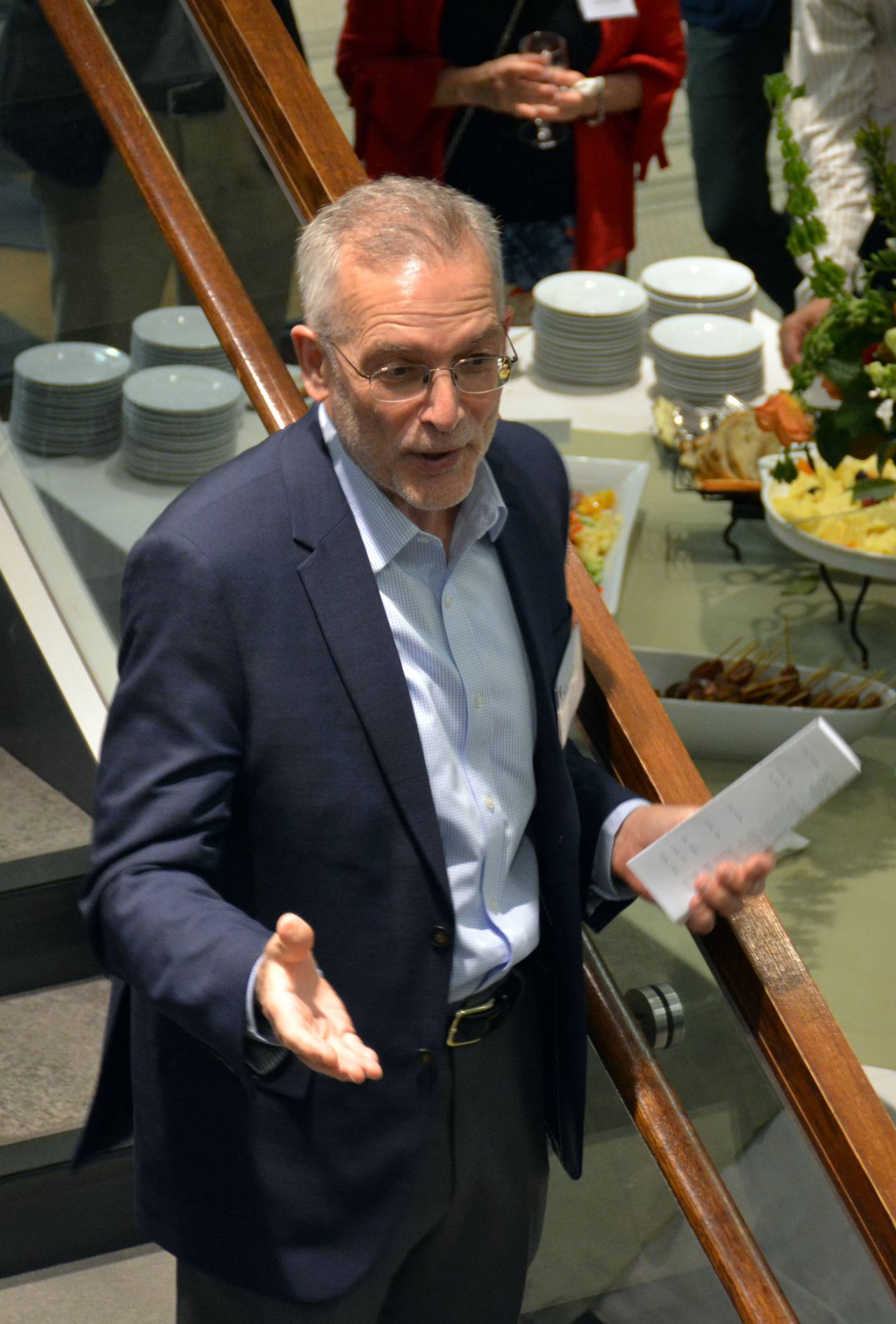 “Today we get to honor and interact with 48 years of great contributions to Princeton and the world,” Michael Celia, director of the Princeton Environmental Institute, said during the symposium’s opening remarks. At a reception following the event, Celia, the Theodora Shelton Pitney Professor of Environmental Studies, said his career studying carbon capture and storage (CCS) began because Socolow “knocked on my door 20 years ago and said to me, ‘Hey, how are you doing? You should be working on underground carbon.’ Rob, thank you for that and a thousand other things.”

“I very much wanted to look forward,” said Socolow, professor of mechanical and aerospace engineering, emeritus, and senior research scholar. “My primary research area is about where the world is heading, not where it has been. That orientation has been the focus of my career for nearly 50 years. I started looking forward a long time ago.”

So was born “Destiny Studies for a Small Planet,” a daylong symposium held April 15 in Socolow’s honor that examined the current state, and trajectory of, six broad topics that are central to Socolow’s long career — and crucial to solving our most pressing environmental crises. The event was organized by the Princeton Environmental Institute (PEI) with support from the Andlinger Center for Energy and the Environment, the Department of Mechanical and Aerospace Engineering, the School of Engineering and Applied Science, and the University Center for Human Values (UCHV).

“I want to set an agenda for the next 50 years,” said Socolow, who transferred to emeritus status in 2013. “‘Destiny’ means the future, but our collective future. We have not spent much time in history asking ourselves where we as human beings will be in a future time. Right now, our exuberance, our love of consumption and acquisitions, is stressing every physical and biological system there is. We have to figure out how to ‘fit’ on the planet, and that’s a job that is still largely undone.”

The symposium was held in the Andlinger Center’s Maeder Hall and consisted of six panel discussions featuring renowned scientists, scholars and policymakers. Many of the speakers had worked with — and been influenced by — Socolow for decades.

“No one has the concern for the future of humanity quite as much as Rob,” said Melissa Lane, the Class of 1943 Professor of Politics and director of UCHV. “Working with Rob has been one of the most cherished aspects of my experience at Princeton. I’ve been struck by Rob’s unparalleled abilities at convening people — as is on display today — across disciplines.”

Lane, along with Harold Shapiro, president of the University, emeritus, and professor of economics and public affairs, spoke during the session that addressed how climate change challenges social and ethical norms. Our environmental crises have in particular stressed the inherent rights of future generations, the panelists said.

Climate scientist Isaac Held, a senior research scientist at the Geophysical Fluid Dynamics Laboratory and a senior meteorologist in the Princeton Program in Atmospheric and Oceanic Sciences who has shaped our understanding of how atmospheric circulation and water vapor affect climate change, opened the first session devoted to how climatologists consider climate variables and risks. He was joined on the panel by Nadir Jeevanjee, a Princeton postdoctoral fellow in geosciences, who is one of the many younger researchers with whom Socolow still works closely.

“I have been a student of Rob’s for 47 years without ever having matriculated at Princeton or paid a nickel of tuition,” said David Hawkins, director of climate policy and the Climate and Clean Energy program at the National Resources Defense Council. Hawkins joined Stephen Pacala, Princeton’s Frederick D. Petrie Professor in Ecology and Evolutionary Biology, on the panel related to one of Socolow’s signature contributions to climate policy analysis, the Stabilization Wedges. Socolow and Pacala also co-founded and co-direct the PEI Carbon Mitigation Initiative.

Published by Socolow and Pacala in the journal Science in 2004, the Stabilization Wedges provide an intellectual framework for sequentially cutting carbon emissions with available tools; the paper has since received more than 3,000 citations in other published papers.

Pacala and Hawkins discussed the “biosphere wedge,” which in one version prescribes increasing tree coverage to remove carbon from the atmosphere. But it’s not that simple, said Pacala, a past director of PEI. “By mid-century we don’t just have to solve the carbon and climate problem. We also have to double food production for our species. So, if in fact, one of these projects takes arable land out of production, it actually creates pressure elsewhere,” he said.

“Beyond that, we have a biodiversity crisis in the works,” Pacala said. “The majority of the terrestrial biodiversity resides in the remaining arable land that we’ve not yet brought into service for agriculture, and those are our tropical rainforests. So we’re really hemmed in.” 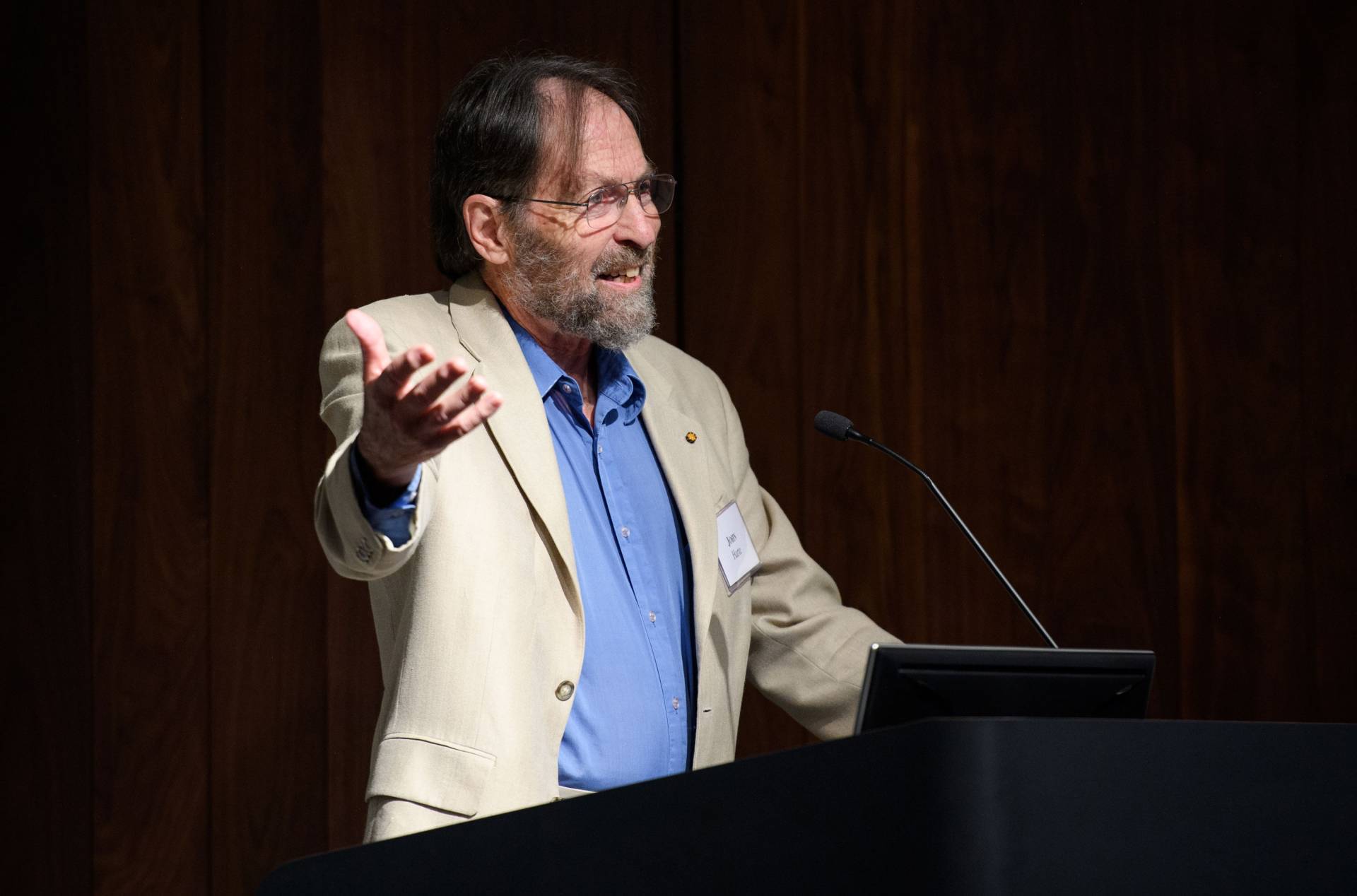 John Harte, professor in the Energy and Resources Group at the University of California-Berkeley and Socolow’s close friend and colleague for 59 years, said that Socolow always had “bolder and wider goals” as an environmentalist. In 1971, he and Socolow published “Patient Earth,” one of the first books to combine the science and social issues involved in climate, energy, water and land use problems.

During the session on energy technology and policy, John Holdren, the Teresa and John Heinz Professor of Environmental Policy at Harvard University and senior adviser to President Barack Obama on science and technology issues, said the key to nuclear power is “breaking the link between nuclear energy capacity and nuclear weapon capacity.”

Socolow expressed concern about a singular, uncritical pursuit of low-carbon solutions and technology that does not consider the potential repercussions, which have yet to be adequately assessed, he said.

“The more the world persuades itself that this is a single problem that must be fixed above all others, the more crazy are the things that we’ll do,” Socolow said. “I asked someone, ‘Can you imagine that we reach our climate goal and regret the way we did it?’ He said, ‘No, I can’t.’ I said, ‘Well, spend more time trying to imagine it.’”

The event’s fourth session addressed the escalating demand for energy in developing countries. “The stresses we’re putting on the planet now are nowhere near what they’re going to be as the developing world adds people with Western lifestyles by the billions,” Socolow said.

While it’s difficult for rich nations to criticize developing nations for excessive consumption, at some point consumption and sustainability become incongruous, said panelist Ashok Gadgil, a professor of civil and environmental engineering at the University of California-Berkeley. “You can’t get more efficient and consume more stuff. We can’t continue to consume at the rate our economies are growing, like drug addicts,” he said. “The only things that just keep growing and consuming are cancer cells. We also have to figure out how to consume less.”

Socolow came to Princeton from Yale University in 1971, hired by Princeton President Robert F. Goheen and Provost William Bowen to make environmentalism interdisciplinary. From 1978 to 1997, he ran the Center for Energy and Environmental Studies, which had been founded in 1971. In 2000, the center's faculty and staff working on energy, including Socolow, were folded into PEI. Socolow had helped establish PEI in 1994 as the University’s interdisciplinary center for research, education and outreach in environmental science, technology and public policy.

“I’ve been part of every interdisciplinary environmental effort on campus,” Socolow said. “When I arrived, I was told to ‘infect the disciplines.’ I think I’m halfway there.” 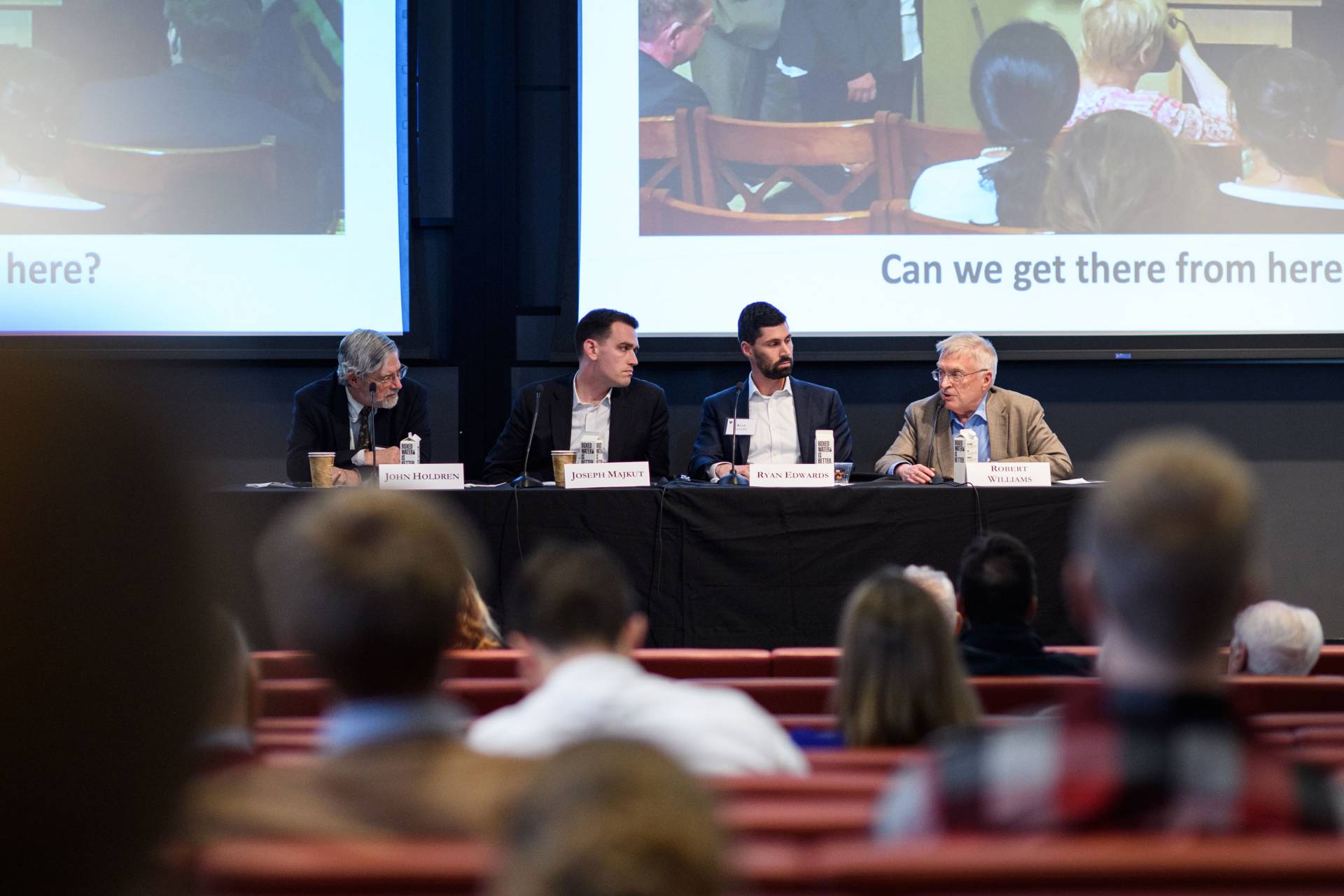 The panels featured renowned scientists, scholars and policymakers, as well as many younger researchers with whom Socolow still works closely. The conversation on energy technology and policy featured, from left to right, John Holdren, the Teresa and John Heinz Professor of Environmental Policy at Harvard University and senior adviser to President Barack Obama on science and technology issues; Joseph Majkut, director of climate policy at the Niskanen Center; Ryan Edwards, Congressional Science and Engineering Fellow in the U.S. Senate; and Robert Williams, senior research scientist, emeritus, in the Andlinger Center for Energy and the Environment.

A physicist, Socolow had been moved by the 1969 Apollo moon landing to pursue environmentalism. “It was a shock to the system that we landed on the moon,” he said. “We hadn’t really thought of ourselves as an orb in cold space. We started realizing that we could overwhelm this little place if we weren’t careful. I said that these are big ideas I’d like to give my career to.”

Even during environmentalism’s exciting early days, “Rob had bolder and wider goals,” said closing speaker John Harte, professor in the Energy and Resources Group at UC-Berkeley and Socolow’s close friend and colleague for 59 years. “I suppose you could say he wanted to alter the destiny of our planet.”

In 1971, Socolow and Harte published the book “Patient Earth,” which was one of the first books to combine the science and social issues involved in climate, energy, water and land use issues.

“[Rob] is a practitioner of rigor without mortis,” Harte said, eliciting laugher from the audience. “He gets the physics right, but he doesn’t take the humanity out of the story. It’s always front and center when Rob formulates solutions.

“I’ve mentored over 40 doctoral students in my career. When I first meet them, I occasionally recognize in them my younger self,” he continued. “I have yet to encounter a young Rob Socolow. I think the mold was broken. As we celebrate his remarkable career, let’s especially honor the man himself, the man who possesses that genuine spark, that unmistakable evidence that betrays the existence of a genial marveling mind.”