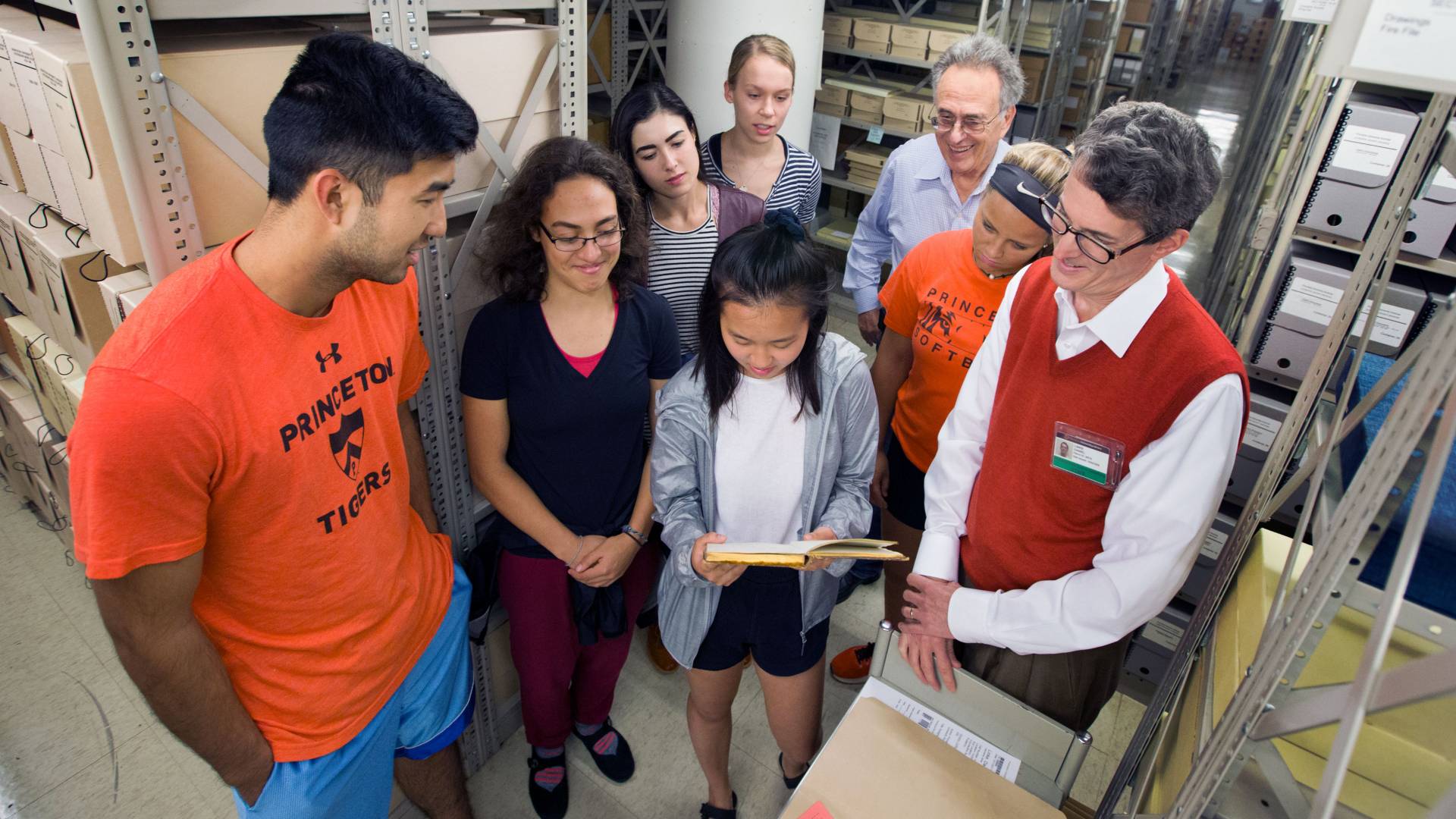 Students in the freshman seminar "Time Capsules for Climate Change" prepared essays and personal reflections that will be stored at Mudd Library until they are opened at the students' 10th, 25th and 50th reunions. Early in the semester, the students visited the University archives at Mudd Library (above) where they met with University Archivist Daniel Linke (at right). The course is led by Professor Emeritus Robert Socolow (rear right).

For his freshman seminar this year, Robert Socolow is asking his class to think about the future, not just for themselves but for the entire planet.

“Climate change poses a deep question: How much do we care about our collective future?” said Socolow, professor emeritus and senior research scholar in the Department of Mechanical and Aerospace Engineering at Princeton. “The heart of the matter is looking after our civilization.”

The seminar, “Time Capsules for Climate Change,” asks students to write about the future of humanity in the context of a changing climate. The students use emerging science to think quantitatively about the impacts of climate change and possible strategies for mitigation. They are writing four essays that will be placed in time capsules to be opened at the students’ graduation in 2021 and at their 10th, 25th and 50th reunions. The time capsules are being stored in Princeton's Mudd Library.

Socolow, a leading researcher in technological and policy responses to climate change, said he thinks of the capsules as “destiny studies.”

“The 50-year time frame,” he noted, “is the length of these students’ careers. There are a huge range of possible outcomes.”

Princeton’s freshman seminars offer students the opportunity to work closely with leading scholars and a small group of classmates. In comments below, the six students in the course, all first-year students, talk about the time capsules they will enshrine in January and open four times through 2071.

Socolow's class is designated the Henry David Thoreau Freshman Seminar in Environmental Studies and fulfills a science and technology without lab requirement.

Melea Emunah plans to concentrate in civil and environmental engineering. Her seminar topic is batteries.

I chose batteries for my topic because I’m really interested in how our energy system will try to wean itself off of fossil fuels, and I think a large part of that is having energy storage that allows and accommodates for the intermittency of renewable sources (such as wind and solar).

Professor Socolow encouraged us to look at divergent futures. The vast array of future paths our nation and our globe could head down is definitely daunting to consider. I could get carried away thinking about each politician that gets elected or each social movement of the day. On the flip side, the fact that Professor Socolow has asked us to consider the future as far out as 50 years means I can brush over these details and instead outline a few possible, broad tendencies.

A time capsule allows you to physically interact with the past. In our case, it will be our past selves. It will also be the past nation and the past world. In this time of immense flux and urgency — particularly regarding how humans will approach climate change — I hope our time capsules will serve as a bookmark to orient our future selves relative to where we were/are now. When we create the time capsules, we will be able to imagine infinite futures. When we open them, we will only see one, the one which will have transformed into the present.

Considering my personal future as well as the future of a technology with important environmental implications engenders both humility and comfort. It presents an important reminder that while I am in control of my personal future and can try to further the cause of protecting the environment, macro-scale challenges cannot be solved by individuals alone. 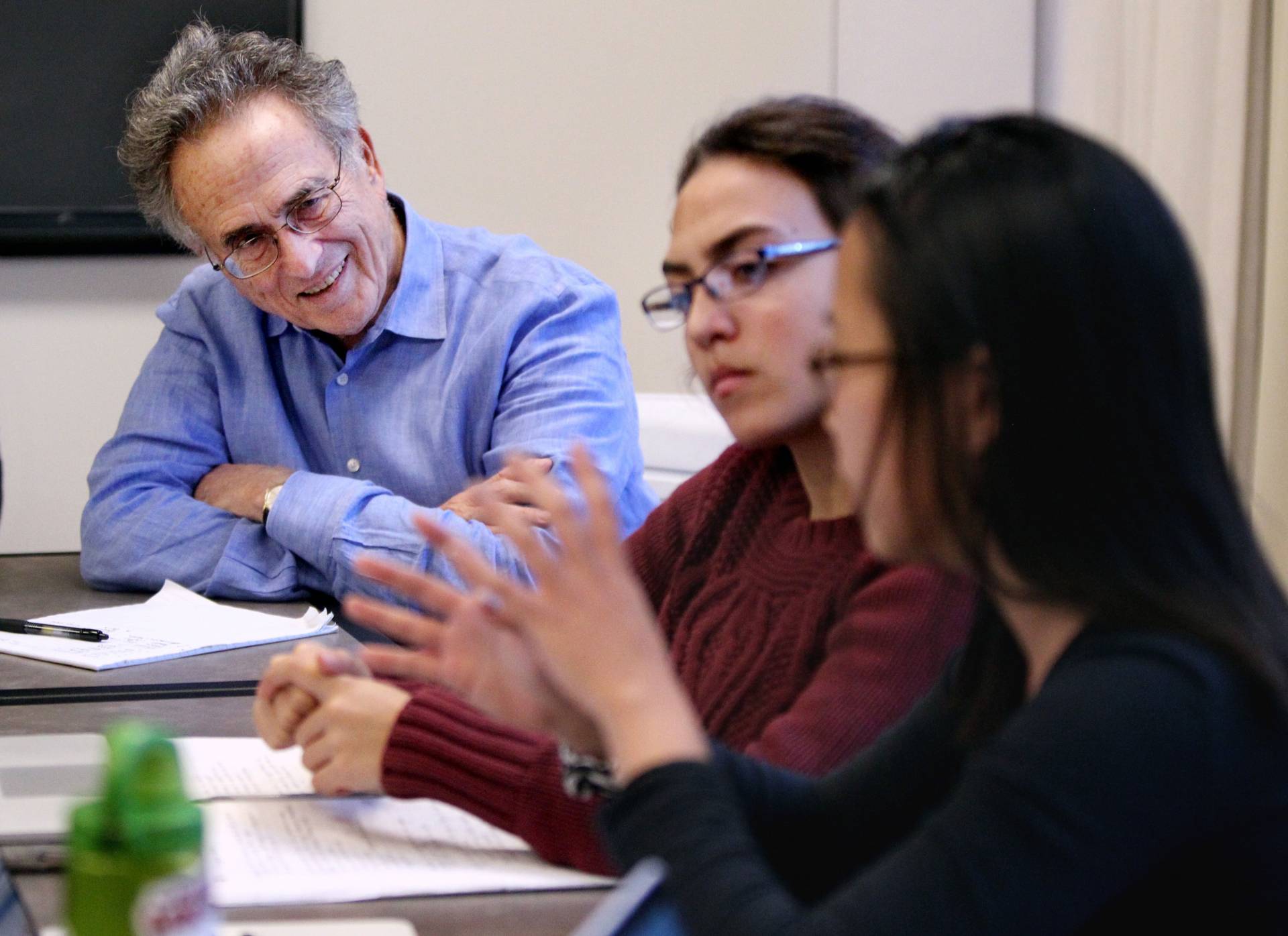 Dora Zhao wants to major in the Woodrow Wilson School of Public and International Affairs. Her topic is sea-level rise.

I was very interested in climate gentrification specifically within sea-level rise because it’s a displacement of people and a changing of how cities are structured. In terms of the time capsule essay, there are lots of initiatives to look at already. I’ve been using those as a basis for some of the short-scale predictions, but there are things that aren’t included in the initiatives that will come up with the threat of sea-level rise.

It’s hard to make these projections. It requires a certain amount of analytical skill. In order to come up with realistic predictions for the future, we have to consider not only the scientific facts but also the multiplicity of other factors that will play into our hypothesized scenarios. I am applying not only quantitative but qualitative skills in order to make a robust and feasible prediction.

By the 50-year reunion, these time capsules are going to be almost like a piece of nostalgia to see if you were right in making projections. The wonderful thing about this project is that it combines both individual and national projections. The personal questions that we answer will make it more relevant to us when we open the time capsules, but the general questions reinforce the fact that issues of climate change affect such a wide swath of people. It puts into perspective how urgent these topics really are.

Jason Kong will study economics, and will pursue a certificate in environmental studies. His topic is geoengineering focused on reflecting extra sunlight into space.

My future scenarios will be focused mainly on albedo enhancement, which entails feedbacks from changes in the Earth's ability to reflect sunlight, global warming and even sea-level change. I am also taking a different spin to make this study a little more interdisciplinary by incorporating religious, political and scientific perspectives on the controversy surrounding deployment of stratospheric aerosols (one technique under consideration for making the atmosphere more reflective).

What we’re trying to do in the class is define what our near and far futures are — “near” being the time that we’re alive and “far” being the time of our kids. It is a huge challenge for someone like me, who comes from not much of a science background. I personally am on the side that you can use science to change the future and do "God's work." By looking into the feasibility and effectiveness of stratospheric aerosol injection, I feel optimistic about our future as a species.

The point of a Plan B like geoengineering is to make sure that, if the apocalypse is looming, we can take matters into our own hands to buy us some time to congregate and survive. So, the capsule I’m most excited to open is actually the one on my 25th reunion, in 2046. That year will be huge for stratospheric aerosol injections. That is when this Plan B option will reach its climax, and injections will be cut back.

Our future is all about planning for the unknown, preparing for the worst. I just hope that we will be able to agree on one thing when the time comes for us to make a decision.

Dana Iverson plans to major in the Woodrow Wilson School of Public and International Affairs. Her topic is electric cars.

I do want to put a few personal items into the time capsule. They will probably be irrelevant to climate. The essays themselves will be super interesting to look at during the reunions, because we’ll be able to reflect on what our academic questioning was like when we were freshmen. I think that’s an attractive thing about time capsules: It feels like I’m writing a chapter in a book that I’ll read later.

I chose to focus on electric cars because transportation is a very personal source of energy consumption. I want to see how electric cars fit into evolving social and cultural norms, as well as economic and political developments. Ideally, our time capsules are going to have both broad and narrow focuses. In the end, it is important to intertwine both spheres in order to make the time capsules multidimensional.

I think this course gives us an opportunity to look at the future in a scientific and academic light, but also a very personal light. Professor Socolow has been very insistent about making the essays less scientific and more human. That’s going to be more interesting for us to reflect on, and also makes them more translatable to a larger audience. This is not to say that the essays won't include hard research or evidence. Scientific analysis is integral to finding solutions for climate change. But human initiative is also required to implement these solutions. It is truly a matter of mobilizing people for a common cause.

I think I’m going to have more of a nostalgic approach to the time capsules. On top of our essays, we’ll also be putting in letters to ourselves, and I think I might ask my parents to write me a letter for the 50th. So, I think I’m looking at more of a nostalgic aspect of the future and more of the academic aspect now. I took the course because it had something cool to look forward to, but also because I’m interested in climate change.

I think there’s an influence from where I live. I’m from Long Island, and they’re building the first offshore wind farm, and there are lots of solar panels. Growing up there, I was exposed to these types of renewable energy forms quite early. Wind farms are also picking up speed in upstate New York. I think those are the two major players to take into account for a low-carbon future.

I think I’ll take the current trends in solar power and magnify them for the 50-year time capsule. I’m going to assume the trend continues under these circumstances, and with the exponential growth in solar power of the past decade. And for the low-end prediction, I’m going to assume that that usage levels off in the near future. That’s not necessarily a correct assumption, but a safe one.

This class really emphasizes how the Earth systems are so intertwined. If you’re trying to make one simple calculation, there are so many other things to take into account, so many components that come into play.

Gianna Mavica is considering majoring in the Woodrow Wilson School. Her topic is geoengineering focused on carbon uptake from the atmosphere.

I was originally interested in this course because of the time capsule focus. I thought it was an interesting way to put climate change in perspective. In addition, I am not a science person so I thought that this freshman seminar would be a good course for a student with a minimal background but an interest in science.

It is a challenge to consider the national/global future as opposed to just my own, because the issue of climate change has multiple factors that contribute to the future of our planet (political, social, economic), especially within the vast implementation of geoengineering.

Oftentimes, science and numbers can be out of touch with a modern layperson. By making this “less scientific and more human,” as Professor Socolow has advised, we are making the issue of climate change more accessible. For me, this means that in talking about geoengineering — which might seem obscure and remote — I need to explain carbon dioxide removal and bio-energy with carbon capture and sequestration in general vocabulary terms that are understandable to the average person.