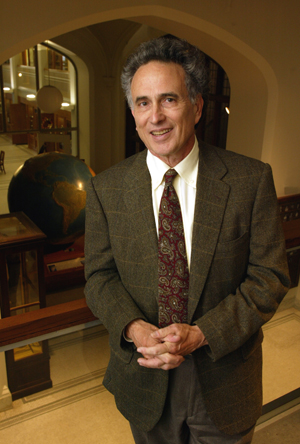 Title: Professor of mechanical and aerospace engineering, co-director of the Carbon Mitigation Initiative and director of the Siebel Energy Grand Challenge

Scholarship: Assessing which technologies and policies might be effective in reducing greenhouse gas emissions: sorting out the many versions of "clean" coal plants, evaluating alternative renewable resources for making biofuels, evaluating the safety of expanding nuclear power, and proposing a new method to calculate a country's obligations to reduce greenhouse gas emissions. He has served in recent months on two key National Academy of Sciences committees tasked with guiding U.S. climate change policy and assessing the nation's potential to develop new energy technologies and energy sources.

How do you respond to people who say climate change is a hoax?

It should not be surprising that a busy species on a small planet is able to affect the planet and cause itself trouble. Maybe some of the details aren't quite right, and some of the urgency may be overplayed or underplayed. But the underlying reality is that this planet that was so large for a preindustrial world is small for an industrialized world, where the population is going to be 8 or 9 billion. We've changed the quality of our interaction with the planet. That's the big environmental idea that I got excited about 40 years ago. It still energizes me that we've got to take on board a whole way of thinking about our relation to the Earth.

Can technology solve the problem? If so, will it be expensive?

An automobile today, with its catalytic converter and fuel injection system, emits a lot less conventional air pollution than a few decades ago, thanks to clever chemistry and instrumentation. Reducing carbon dioxide emissions will be tougher, because fossil fuels are very low cost compared to their competitors. But there are more innovations ahead -- a lot more. And, yes, there will still be some extra cost.

But look at worker safety. We take for granted that everything we buy probably did not result in a broken limb on the way to making it. And as a result it probably costs a little bit more. But we have accepted this cost because that's the kind of society we want to live in. Similarly, not long ago we didn't worry much about the toxicity of chemicals, but we have since gotten rid of whole classes of solvents because we found out they polluted the water. These achievements required new laws and regulations, in part because they raised costs, at least initially. Similarly, there is a key government and policy role in dealing with climate change.

What role does personal behavior and responsibility play in countering global warming?

The climate problem is caused by prosperity. There are more and more people getting wealthy, in the sense that they have a home and appliances and a vehicle to use. Our growing demands on the planet come from lots of people doing ordinary things -- and not so ordinary things.

When I got out of college I wanted to see every country in the world, and I've done a pretty good job. Students nowadays aren't that different from me 50 years ago in what they want from life. But if college graduates all over the world have that goal, will we fit on our planet or will we overwhelm it? Can that kind of self-realization be compatible with planetary constraints?

Struggling with these questions will be on the lifetime agenda of the undergraduates today as they search for ways through this thicket of quasi-moral and quasi-technical issues. It may take two or three generations. It may lead to some redefinition of the good life.

You've been in this field a long time. Has anything surprised you recently?

I attended an international meeting on climate change last July, where I was struck by how far apart those from developed countries and those from developing countries were in their thinking. Those from the developing countries were saying that development and justice are more important than solving the global climate problem. They felt strongly that they should be able to emit their share of carbon dioxide in the process of industrializing.

I came away disturbed that we in the developed countries have been trying to tell them what to do and have not been listening to them enough. We need to do a better job. There are already far more people in the developing world, and soon the impact of their consumption patterns will dominate global environmental problems. In the course of this century, their views about what kind of planet we all share will become dominant.

Another topic that's been on my mind lately is geoengineering -- the concept that we can manipulate the planet. An extreme example is putting aerosols into the stratosphere to cool the planet in the case of a climate emergency. Geoengineering raises some very important problems that we haven't yet confronted concerning how we want to relate to our planet. How much do we want to be in charge versus letting nature take its course? Do we want to take over from God, as some people think of it, making decisions about how hot or cold the Earth is -- dialing the planetary thermostat? Do we want to set any limits on how completely we will control our environment? How do we prepare ourselves, if it is our destiny to be Earth engineers?