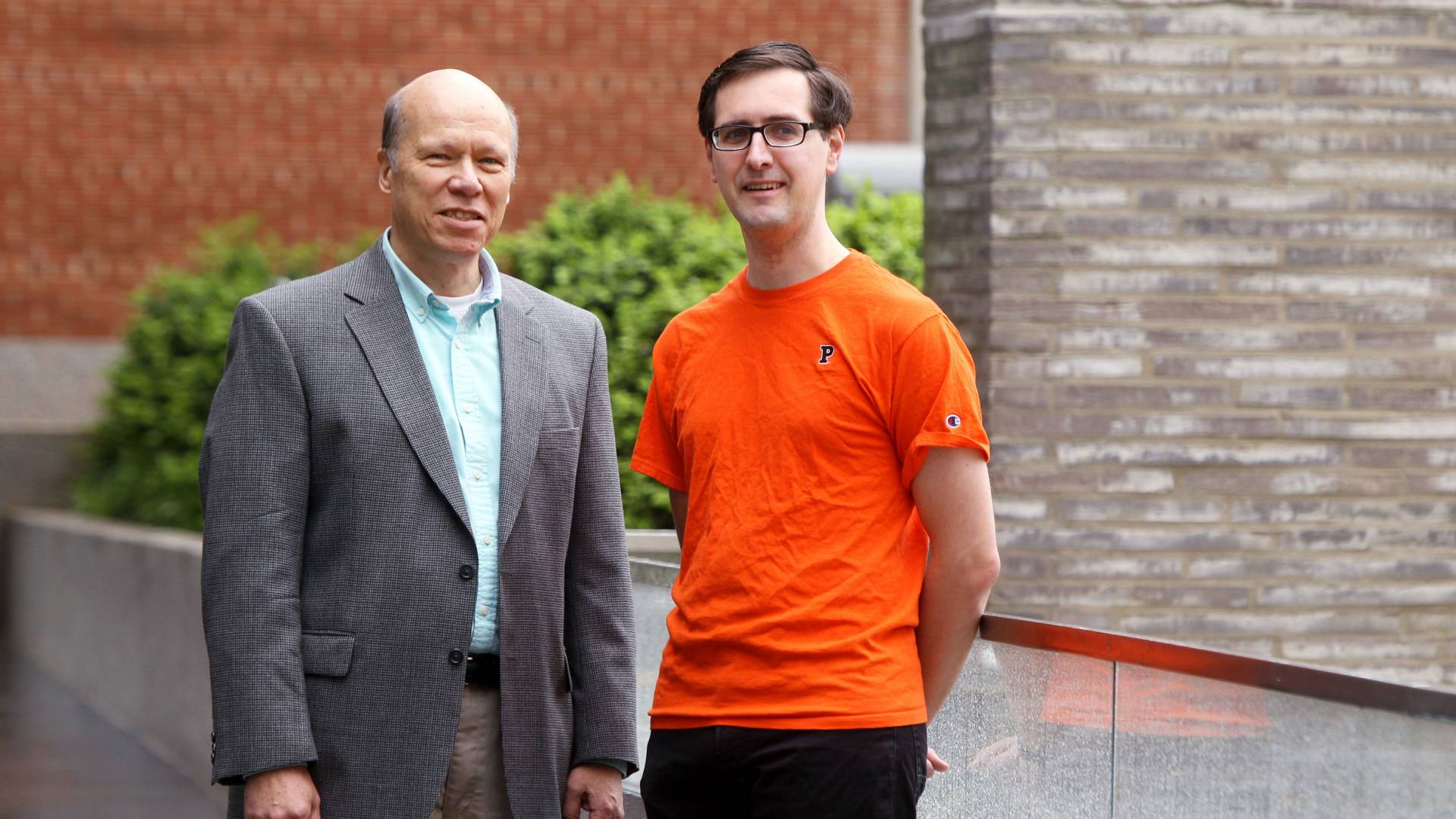 Suleman Din for the Office of Engineering Communications

Princeton researchers Eric Larson (left) and Hans Meerman (right) are evaluating a method to create alternative vehicle fuel from crop residues, sawdust and branches. The method, called catalytic hydropyrolysis, could use the refining and distribution systems now used for gasoline to create a fuel that would work in modern engines, say Larson, a senior research engineer, and Meerman, a postdoctoral fellow, both at the Andlinger Center for Energy and the Environment.

Finding an alternative vehicle fuel poses a difficult challenge: it has to be relatively cheap and able to reduce carbon emissions without using up valuable crop land or trees from forests.

Now, researchers at Princeton's Andlinger Center for Energy and the Environment say one possible solution might be all around us. In a recent paper, the researchers evaluated a method that creates fuel from wood residues, sawdust and branches. The method, called catalytic hydropyrolysis, could use the refining and distribution systems now used for gasoline to create a fuel that would work in modern engines.

"If we want to limit carbon emissions to a safe level, we're very likely going to have to leave some oil in the ground," said Eric Larson, a senior research engineer at the Andlinger Center for Energy and the Environment and an author of the paper. "It's a lot easier if we can find an alternative fuel that we can put into our existing infrastructure."

In a paper published this spring in the journal Sustainable Energy & Fuels, Larson and Princeton postdoctoral fellow Hans Meerman present designs of processes and comprehensive assessments of fuels production based on catalytic hydropyrolysis, a technique being developed by other researchers. The new technique creates combustible oil by heating biomass in the absence of oxygen. Larson and Meerman designed systems that could create a zero-carbon vehicle fuel, meaning that creating and burning it results in no net emission of carbon. Integrating carbon-capture technology into some of the designs, they found it could actually pull carbon out of the atmosphere while creating fuel.

However, the researchers said there are still questions about whether the technique could scale to an industrial level and about whether it could economically compete with oil. Commercial-scale demonstrations would be needed to answer the question of scale, while the economic question depends on the difficult-to-predict price of crude oil.

Pyrolysis is not a new technology. But Larson said that most pyrolysis techniques create oils that are too acidic and contaminated to be processed in existing crude-oil refineries. Therefore, the researchers concentrated their evaluation on the relatively new technique in which injected hydrogen acts, in the presence of a specialized catalyst, to circumvent the formation of undesirable compounds in the oil product. The addition of hydrogen creates a fuel that will seem relatively familiar to existing refineries, Larson said.

The technique first drew Larson's attention when he heard a talk on it at a conference in Chicago several years ago.

"They showed actual samples of the liquids that had been produced," Larson said. "Usually when you look at pyrolysis oils, they are black and gooey. The stuff they showed looked almost like diesel fuel."

Larson and Meerman said that creating vehicle fuel through catalytic hydropyrolysis essentially contributes zero carbon emissions to the atmosphere. That is because carbon in the biomass feedstock arrived there from the atmosphere via photosynthesis; converting the biomass to fuel and burning the fuel in vehicles returns that carbon to the atmosphere. They said it is also possible to further remove carbon during the fuel production process by capturing byproduct carbon dioxide, which can then be stored in secure underground geologic formations. This step would make fuel creation a way to remove carbon dioxide from the atmosphere, a goal known as "carbon-negative."

"Put simply, the transportation sector would actually suck carbon dioxide out of the air and sequester it underground," said Robert Brown, the chair of mechanical engineering at Iowa State University, who was not involved in the research. "Clearly, actively removing carbon dioxide from the atmosphere is going to lower greenhouse gas concentrations faster than simply reducing the rate at which we emit greenhouse gases.”

The researchers also noted that because catalytic hydropyrolysis can use any type of biomass material, it does not need to rely on crops that use valuable farmland. Instead, the system can be fed with waste byproducts from sustainable timber production, such as branches and sawdust, or with crop residues like corn stalks often left in fields after a harvest.

One major question about the process is cost. Larson said that to succeed, catalytic hydropyrolysis needs to do more than provide an environmental benefit.

"The economics have to work," he said.

The researchers' analysis indicated that this could prove a difficult barrier to adopting the technology without an incentive, such as a carbon tax. They estimated the production cost per barrel of fuel would be about $90 without any incentive. This is much lower than the cost of most other low-carbon alternative fuels, Larson said, but recent crude oil prices have hovered about $50 per barrel. The researchers estimated that a carbon tax of $80 per metric ton of carbon dioxide would make the catalytic hydropyrolysis fuel competitive with gasoline made from $50-per-barrel crude oil. Larson noted that the price of crude oil today does not include costs that must be borne in the future as a result of climate change.

"Gasoline is a beautiful fuel because of its energy density," Larson said. "But we don’t assign to its cost today the externality cost of carbon pollution."

The other big question about catalytic hydropyrolysis is whether it can work at a large-enough scale to produce the vast amount of fuel needed at the national level. Currently, development of the technology has only encompassed laboratory science, not industrial production, Larson said.

"Getting a process to work day-in and day-out at large scale is another matter entirely. It often has to do with mundane questions like how you handle the biomass without clogging up the system," he said. "There are a lot of areas where you can run into problems."

Despite the challenges, Larson said the research is promising, and the researchers’ analysis suggests that it should be a priority for further development. In the long run, he said, society will have to deal with problems caused by excess carbon in the atmosphere and will need many options to reach the stated goal of the Paris climate agreement of limiting global warming to well below 2 degrees Celsius.

"I don’t think it's well appreciated what the world needs to do to meet the Paris goal," Larson said. "We will have to remove some CO2 from the atmosphere over time, not just reduce emissions." The catalytic hydropyrolysis process might be one that can make a carbon-negative contribute while helping meet transportation energy needs.